There's Blood on the Moon Tonight 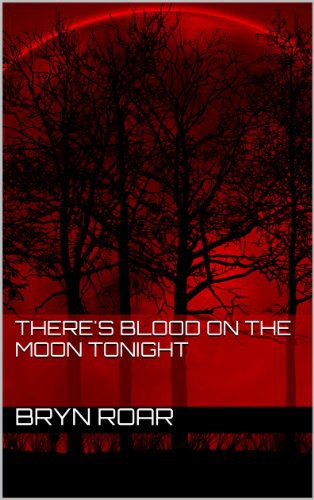 There’s Blood On The Moon Tonight
By Bryn F. Roar

The following text is an original work of fiction
. There’s Blood on the Moon Tonight
is not sponsored by, affiliated with, or endorsed by any author or product mentioned within. Inspirations aside, the central characters in this novel, as well as the main plot, are all of my
own
imagination. Any similarities to any living or dead persons are completely coincidental.
B.F.R.

For Mr. Smee. And all those childish things I refuse to put away. Also, to Wilton Robert. To whom I failed to say Goodbye.
See you later, Alligator…

Author’s Note:
Moon Island, S.C. exists solely in my overwrought imagination. Yet exists there, it
surely
does. For I’ve made a nightly pilgrimage there since I was nine-years-old. As many are apt to point out, however, it’s an unlikely geographical
and
geological oddity, sitting off the coast of South Carolina as I have it. Yet to place this island anywhere else in the world would be the real fabrication.
B.F.R.

“
Everyone is a Moon and has a Dark Side, which he never shows to anybody.”

The dreams always start out the same…

One scene bleeding into the next. A linear progression, if I’m not mistaken, although the closer they get to the end. To the Bunker. I’m not so sure, seeing as how those events haven’t happened yet. But the
beginning
…yeah, that bitch is always the same, Doc…

And I know her by heart.

October 13, 1996. I’m nine years old. Waiting for my mother to return home from her Sunday night PTA meeting at the Moon River Academy. Where I attend school in Miss Ashford’s third grade class. Mom’s late. It’s half-past where–the-heck-is-she and I’m starting to freak out a little. The meetings are usually over by eight-thirty. Mom is always home by nine o’clock, latest. It’s just half-an-hour past that, though, and I tell myself I’m overreacting.
Chill out, dude!
She’s probably just clucking with the other biddies…

Nuh-uh. Not this time, Buddy boy.
As plausible as that sales pitch sounds, my gut just won’t buy it.

Earlier I could have sworn I heard keys in the front door. Mom’s keys, with their distinctive merry jingling, but when I called out to her she didn’t answer.

The house is likewise uneasy this evening. It creaks as if someone is creeping along the halls. Groans, as if it has something to say. A picture emerges in my head, an intruder stealing softly towards my room…

The shining eyes of a rat, the drooling fangs of a dog, the mind of a monster…

I shake the morbid imagery from my mind. That’s just the house “settling,” as my pop likes to say, the floorboards and joists talking to one another.

Nothing to wet the bed over, Buddy boy!

It’s funny, though, how you only hear that stuff in the dead of night. I close my eyes, willing myself to calm down…
No! Something is wrong here!

My eyelids snap open like old-fashioned window shades. The house is suddenly still. No more creaks. No more groans. Even the boisterous crickets outside are giving their evening jam session a rest. Maybe they feel it, too. In the darkness I barely breathe. My eyes are as open as far as they’ll go, my ears attuned to the slightest sound. I’m so focused I could hear an ant burp in the next room. Except for the
Tick-Tock
of my Mickey Mouse alarm clock, sitting atop my bedside table, the silence is complete.

I hold my breath, listening to what the silence has to say. An occasional car driving by on the newly paved street outside our front yard breaks this silence now and again, giving me an opportunity to take a breath. Unfortunately, none of the cars turn into our driveway. Their departure down the road makes the returning silence all the more deafening. Mickey, that smiling rat, ticks inexorably on. His gloved finger marches mercilessly across the face of the clock; marking the minutes my mother is late. Each tick-tock is a question mark:
Where’s Mom? Where’s Mom? Where’s Mom? Where’s Mom?

I pull my X-Files bedcovers up to my chin, hoping some of Mulder and Scully’s courage will rub off on me. A full moon filters through the gauzy curtains above my bed. The pale lunar rays come to rest on my glow-in-the-dark monster models, lined up
Just So
on top of my dresser. The backdrop is a cemetery I made myself out of household items. Papier-mâché, Styrofoam, Popsicle sticks, and gobs of Elmer Glue. Pretty impressive, if I say so myself. The only model missing from the lineup is Dr. Jekyll/Mr. Hyde. Like the monsters that paper my walls, the Aurora models say a lot about who I am. My heroes aren’t Michael Jordan, John Elway or Bruce Willis—contemporary idols of the day. No, sir. My idols are Dracula, the Wolfman, and Frankenstein’s misunderstood creation, as well as the men who played them in their black-and-white glory days. The Universal Triumvirate: Boris, Bela, and Lon Chaney Jr.

When my teacher, Miss Ashford, went around the classroom, asking what we wanted to be when we grew up, she got the usual ‘ho-hum’ responses:
Firemen, cops, doctors and nurses
.
Morgan Lee said he wanted to be the next Harrison Ford, and received admiring looks for his audacity. When she got to me, I said I wanted to be the next Ray Harryhausen and got nothing back but a whole lot of blinking eyes and blank stares.

Ray Harryhausen? C’mon, Doc! Not you, too! You mean to tell me an educated man like yourself has never heard of Harryhausen, the stop-motion magician? Well, don’t feel bad; neither did Miss Ashford. Ray Harryhausen was the special effects wizard behind such classics as
Jason and the Argonauts
and
The Seventh Voyage of Sinbad.
Both of which, by the way, are prominently featured on what my mother likes to call my “Wall of Shame.”