Read They Came From SW19 Online

They Came From SW19 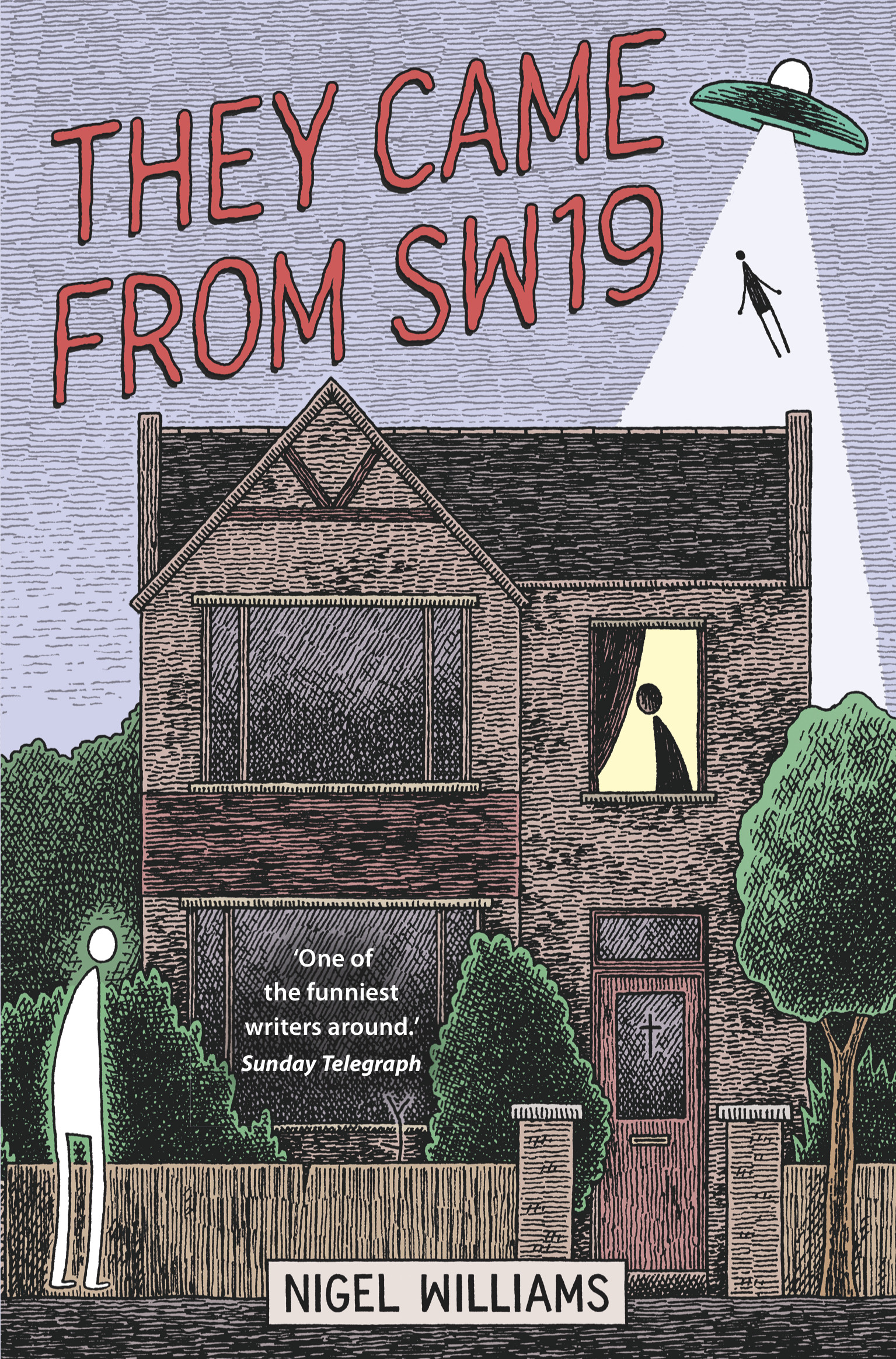 Nigel Williams
is the author of sixteen novels, including the bestselling Wimbledon Trilogy. His stage plays include
Class Enemy
and a dramatization of William Golding’s
Lord of the Flies
. He wrote the screenplay for the Emmy and Golden Globe award-winning
Elizabeth I
, starring Helen Mirren. His BBC Radio 4 comedy series
HR
(featuring Jonathan Pryce and Nicholas le Prevost) is now in its fourth series. He has lived in Putney for thirty years.

Marbles
Double Talk
Class Enemy
Easy Street
Line ’em
Sugar and Spice
Trial Run
The Adventures of Jasper Ridley
W.C.P.C.
My Brother’s Keeper
Country Dancing
As it Was
Consequences
Breaking Up
Nativity
Lord of the Flies (adapted from the novel by William Golding)
The Last Romantics
Harry and Me
MyFace
HR (radio series, currently in its fourth season on
BBC Radio 4
)

They Came From SW
19

First published in the UK by Faber and Faber Limited
1992

This edition published in the UK by Corsair,
an imprint of Constable & Robinson Ltd, 2013

The right of Nigel Williams to be identified as the author of this work has been asserted by him in accordance with the Copyright, Designs and Patents Act 1988

For
Ned, Jack and Harry

The worst thing about my dad dying was my mum telling me about it.

When I get to forty-two, I hope they shoot me. I know quite a lot of forty-two-year-olds and they are all a real problem. It is a very difficult age. My biology teacher is forty-two, and when I found that out, it explained a lot of things about him.

Forty-two-year-olds – I’ve noticed this – rarely bother to finish their sentences. You find them hanging round the corners of the house, pouring each other drinks, lighting each other’s cigarettes and saying things like, ‘Bobbo, of course . . .’ They don’t need to say any more than that. Everyone knows what follows. Mere mention of the name ‘Bobbo’ is enough to activate hundreds of Bobbo stories which everyone has been telling twice a day ever since the 1960s. The Good Old Days! Get with it! The world is changing!

It isn’t my fault! I know if I weren’t fourteen she wouldn’t be forty-two, but the two things are not, as my biology teacher would say, ‘causally related’.

The day my dad died was a hot, dry day in early September. It didn’t look like the sort of day on which people died. It was more like the sort of day you expect at the start of a holiday. Even the sky above the tiny roofs of Stranraer Gardens was, from what I could see of it, the deep blue of the sea on travel posters.

I didn’t even know he was ill. They had called Mum while I was at school and she had left for the hospital before I got home. She got back from St Edmund’s at around eight o’clock. I was sitting in the small room at the head of the stairs – the one he always used to call his office. The front door opened and slammed shut, and the wall next to me shook nervously. My dad was always very proud of the fact that we lived in a six-bedroomed house. It’s meant to be a three-bedroomed house, but the Maltese plumber who had it before us put up an amazing number of walls and partitions and screens. From the outside it looks like another dull little terraced house, but when you’re inside it you feel like a rat in a maze.

Immediately I heard the front door I switched off his computer. I knew it was her and knew the first thing she would do would be to listen at the bottom of the stairs to see if she could hear the hum of the machine. I’ve tried muffling it with scarves and old raincoats, but the house is so small that she always hears. She’s frightened that it’s going to rot my mind and turn me into a hunchback.

She’s left it too late. My mind is rotted to compost and I am about as close to a hunchback as you can get.

After a minute or so, I heard her come up the stairs and wait on the landing. Why was she waiting? Had I done something wrong? Of course my mum always moves around the house quietly and fearfully, like a woman listening hard for the nastier kind of burglar. But, as soon as her face came round the door, I knew we were looking at a problem. She worries about everything, but this time I could see it wasn’t my inability to practise the saxophone.

She has long,
grey
hair, and she was brushing it back from her face. She looked like she did the day she told me about – to use her own words – ‘the marvellous thing men and women do with their bodies’. For a moment I thought she was going to give me an update on this particular bulletin – the disgusting thing men and women do with their dachshunds, perhaps – but instead she said, ‘A terrible thing has happened, Simon!’

She left it there. I was obviously supposed to say, ‘What, Mother? Do tell me!’ But I didn’t. I just carried on looking at the floor. I have very bad eye contact, she tells me. Bad eye contact, bad posture and terrible skin.

‘Norman has gone from us!’

I was getting the message. He was gone. But where, Mum? You know? Be more specific.

She put her hand up to her forehead and started to rub it anxiously. She flinched a little as she did this. Then she lowered her face towards the floor and snaked up sharply so that she was looking into my eyes. ‘He has gone,’ she said, ‘to Higher Ground!’

Something about the way she said this suggested to me that she was not referring to the Lake District.

She sat down heavily on the black sofa in Dad’s office. The one he intended to use for clients. I used to fool about and pretend to be a client sometimes, which seemed to amuse my dad a great deal. Mum, looking slightly out of place in the room, brushed the hair back from her eyes. Then she looked off into the middle distance, as if she was trying to find her own personal spotlight.

I did not like the use of the past tense, my friends.

‘Oh my God!’ she said again, and then, clenching her fists tightly and drumming them against her forehead in double-quick time, she squeaked, ‘What does it all mean, Simon?’

This is typical of the way forty-two-year-olds talk. They cannot hold an idea in their heads for very long. A thought occurs to them and out it comes – like bread from a toaster. You have to go through their pronouncements very carefully and decode them. What did all
what
mean?

She got up from the sofa and came towards me. About three yards away, she stopped and shot out both arms. She looked as if she was about to sing. For a moment I thought she
was
going to sing (my mum is capable of such things when we are alone together). But she just stayed there, her arms at an angle of roughly 110 degrees to her body. I didn’t give her any encouragement. After a while she put her arms down in the sort of resigned, hopeless way in which people take apart tents or deconstruct folding tables.

She didn’t say this with much enthusiasm. Then she stepped back and looked at me sadly. She always looks cold, does my mum.

‘I wish you’d tell me your emotions,’ she said in a small voice. It was typical really. Something was my fault again. I was supposed to throw myself into her arms, or what? And what emotions? I’m fourteen. I don’t have emotions.

Now that her arms were well and truly down, she seemed inclined to test out the old legs. She walked north-north-east, in the direction of the very large colour photograph of me that hangs on the wall next to my dad’s desk. I put the points of my fingers together and looked over them at a spot about a foot above her head.

Then she gave it to me straight: ‘Norman is dead!’

She paused dramatically. And then added, ‘A heart attack.’

Why didn’t she say this earlier? Why did it take three minutes of pacing round the room to lead up to it? But, now she was in specific mode, she kept on coming with the facts.

‘His breathing’, she went on, ‘became “laboured and stertorous” at about three forty-five, and by teatime he was in . . .’

Here she paused, obviously confused about what he was in. Finally she came up with, ‘. . . serious difficulties.’

She was making him sound like he was entered for the Fastnet Race. Although – maybe dying is like ocean racing. I wouldn’t know. I just wished she’d stop giving me all this blow-by-blow stuff. But she had started and she was going to finish.

‘At four-o-three a man called de Lotbinniere came to give him cocoa and take his temperature. But that was a mistake.’

I should think so. From the sound of it, Dad was well past the hot drinks stage. I looked up. I could see her wondering how far she should go along the de Lotbinniere front.

I hunched my shoulders and sucked in my cheeks. For some reason I found myself wishing I could lay my hand on my glasses. It would have been nice to have something between my eyes and the rest of the world. To take my mind off what she was saying, I started to think about this de Lotbinniere character. What was he doing wandering around hospitals waving thermometers in the faces of dying people? Shouldn’t someone put a stop to his activities?

Mum had moved on from de Lotbinniere. She had that glazed expression you often see on her face when she is trying to tell you any story in which she is the main character.

‘I went out for a cup of tea from the machine, which was at the end of the corridor by the glass doors and did soup as well. Hot, thick tomato soup, it said. Although I wanted tea . . .’

A haunted look came into her eyes. I could not have said whether this was to do with the soup-versus-tea controversy, or the death of the man to whom she had been married for twenty years.