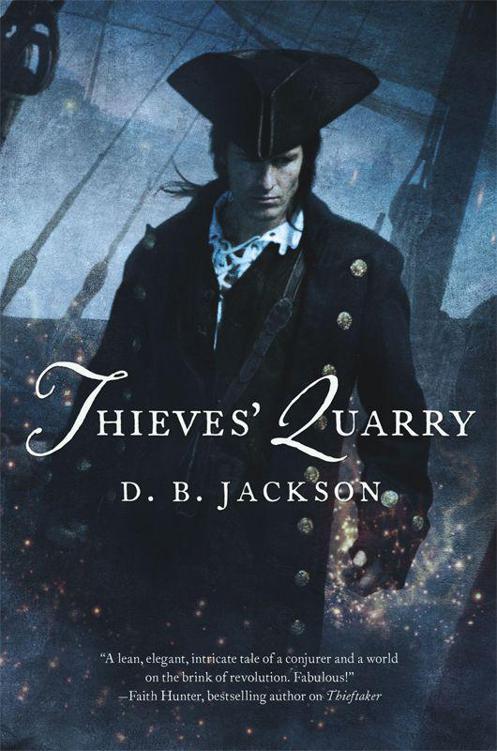 For Lucienne Diver, with deepest thanks for her advice, encouragement, and friendship

A Plan of the Town of Boston

Ethan Kaille Novels by D. B. Jackson from Tor Books

He heard the man’s footsteps first, boot heels clicking on the cobblestone street leading toward Clarke’s Shipyard. A moment later, Tanner came into view, a bulky shadow against the faint, distant glow of the comfortable homes of Boston’s North End. He walked with purpose, his hands buried in his pockets. Every few strides, he glanced back over his shoulder.

Tanner passed Ethan Kaille without noticing him, though Ethan stood just off the lane, so close that he could have grabbed the man’s arm as he hurried past. With the concealment spell Ethan had placed on himself a few minutes earlier he could have planted himself in the middle of the street and Tanner would have collided with him before realizing he was there. Still, Ethan breathed into the crook of his arm, so as not to give himself away with a puff of vapor in the cool autumn air.

He watched as the man walked onto the wharf and crept past the first of the shipyard warehouses. Tanner moved with more caution now, his steps on the gravel and dirt fill of the wharf nearly lost amid the sound of small waves as they slapped against ships’ hulls and lapped at the timbers of the pier.

The moon, a night or two past full, hung low in the east, like some great, lidded red eye. Its reflection wavered on the smooth waters of Boston Harbor, casting just enough light for Ethan to mark Tanner’s progress as the thief slipped from shadow to shadow.

Somewhere out on the wharf, amid the warehouses, Tanner had hidden a small package containing several gold watches that he had pinched from a watchmaker named Charles Short. All told, they probably were worth five times the ten pounds Short was paying Ethan to recover them. But Ethan tried not to think about that. A thieftaker’s reputation depended not only on his cunning, not only on his prowess with a blade or his brawn, or, in Ethan’s case, his skill as a conjurer, but also on his honesty.

Unless that thieftaker happened to be Sephira Pryce. But he tried not to think about her, either.

Ethan had been working this job for the better part of a month, watching the wharves, learning what he could of the men and women who unloaded trading ships when they arrived in Boston, even making inquiries with merchants and wharfmen about the captains of the various vessels. He had gone so far as to enlist the help of his old friend Diver—Devren Jervis—who worked the wharves when he wasn’t involving himself in more questionable business opportunities in the city streets. Diver had been watching his fellow wharfmen on Ethan’s behalf, looking for odd behavior or signs that one or more of them had come into some coin in recent days. It hadn’t taken Diver long to settle on Tanner.

“He’s not wearing jewels on his fingers, or anything like that,” Diver had told Ethan two nights before as they sat in the Dowsing Rod, the tavern they frequented, which was located on Sudbury Street on the edge of New Boston, as the west end of the city was known. “But he’s acting strangely just the same. Like he’s hiding something. I think he’s got those watches hidden away somewhere out there on one of the wharves. Or Clarke’s Shipyard. That’s where he works, you know.” He had paused then, sipping his ale and eyeing Ethan slyly over the rim of his cup. “So how much is Short paying you?”

Ethan had laughed. “Ten pounds. And if you’re right about Tanner, four of them are yours.”

It was more than he usually would have paid for such information, but he and Diver had known each other for a good many years, almost since the day, more than two decades before, when Ethan first arrived in Boston. Diver had only been a boy, but he had become Ethan’s first friend in the city. He had known that Ethan was a conjurer—a speller, as his kind were called in the streets—for longer than anyone alive other than Ethan’s sisters. And Ethan’s work had gone well in recent months. He could afford to be generous.

After speaking with Diver, Ethan too had begun to watch Tanner, observing him from a distance as the man worked the shipyard, and following him through the narrow alleys of the South End to a small, run-down tavern where he spent most of his evenings. The thief was easy to spot: brawny and tall, mustached and fair-haired. He spoke with a faint Cornish accent, and he had a raucous laugh that frequently punctuated his own jokes.

It had taken Ethan only a couple of days to decide that Diver had to be right. Tanner was their man. The Cornishman had returned to the shipyard warehouses several nights running, each time arriving after midnight, skulking through shadows, and crawling on his hands and knees out near the end of the pier. He had also met with a number of men whom Ethan knew to be fences. But thus far, Ethan had yet to see Tanner exchange money or goods with any of them. And, on the one occasion when Ethan managed to get onto the wharf unseen and search for the watches himself, he found nothing.

That was why he had come tonight. He had guessed that Tanner would return to the shipyard yet again, and this time he intended to confront the thief while he had the watches on his person. As Tanner continued along the side of the warehouses, Ethan eased onto Ship Street and began to make his way toward the wharf, still concealed by the spell.

Out on Boston Harbor, in the distance and to the south of where Ethan walked, lights bobbed on the gentle swells: lanterns burning on a dozen or more British naval ships. Several of the vessels had been anchored within sight of the city for a week or more; eight others had sailed into view earlier this day. They were arrayed in a loose, broad arc, their reflections dancing and swirling like fireflies. They might have been beautiful had it not been for what they signified: more strife and fear for a city already beleaguered by its conflicts with the Crown.

But these were worries for another time. Tonight, Ethan had business with Christian Tanner.

He stole toward the wharf, placing his feet with the stealth of a housebreaker, peering into the shadows, trying to keep track of the thief. Before he had gotten far, however, he heard raised voices. A man cried out and was abruptly silenced. An instant later something—or someone—fell to the ground with a heavy thud. A torch was lit on the merchant ship nearest the end of the wharf, and then another.

Ethan started running toward the commotion, but halted at the sound of an all-too-familiar voice. It was that of a woman, low and gravelly, so she sounded as though she was purring as she spoke. Except that her words didn’t match her alluring tone.

“… Not very clever, Tanner,” Sephira Pryce said. “Mister Short isn’t pleased, and that means that I’m not pleased either. You’re new here in Boston, but that doesn’t excuse what you’ve done.” She stood over the man, and even from a distance, even in the flickering light of the torches held by her toughs, Ethan could see that she looked lovely. Black curls cascaded down her back, shining with torchfire, and her breeches and the tight-fitting indigo waistcoat she wore accentuated the generous, perfect curves of her body. “When you come to a new city you should inquire of those who are familiar with its customs and its habits. You should find out who to avoid angering, and who to avoid altogether. Wouldn’t you agree, Ethan?”

This last she pitched to carry.

Tanner, who was on his knees at her feet, bleeding from his mouth and nose and from a dark gash on his temple, looked around and licked his bloodied lips.

Ethan rubbed a hand over his face and cursed under his breath. She had done this to him before, swooped in on one of his jobs at the last moment to rob him of the goods he hoped to recover, and thus of his payment. She knew the streets of Boston the way a merchant captain knew the Atlantic coastline. She had cultivated friendships with nearly every useful person in the province, from the king’s commissioners on the Customs Board to Boston’s most successful merchants, from the city’s barkeeps and street peddlers to its most violent criminals. Most often, Ethan’s jobs were too small to draw her notice. But on occasion, one of Boston’s wealthier citizens hired him to recover something of value, arousing Sephira’s interest in his work. It had happened three years before, when Ethan was hired to find the killer of Jennifer Berson, the daughter of Abner Berson, one of the city’s most prosperous merchants, and again sixteen months ago, when Ethan was asked to recover goods stolen from one of the city’s wealthier shopkeepers. And it seemed it had happened once more with this job.

Jupiter's Bones by Faye Kellerman
The Thorn and the Blossom: A Two-Sided Love Story by Theodora Goss
Bellwether by Connie Willis
The Belly of Paris by Emile Zola
Long Live the King (An Italian Mafia Romance Duet #2) by WS Greer
Princess in Love by Julianne MacLean
Me and My Baby View the Eclipse by Lee Smith
Cursed Be the Child by Castle, Mort
The Last Days of Dogtown by Anita Diamant
The Duke's Deceit by Sherrill Bodine