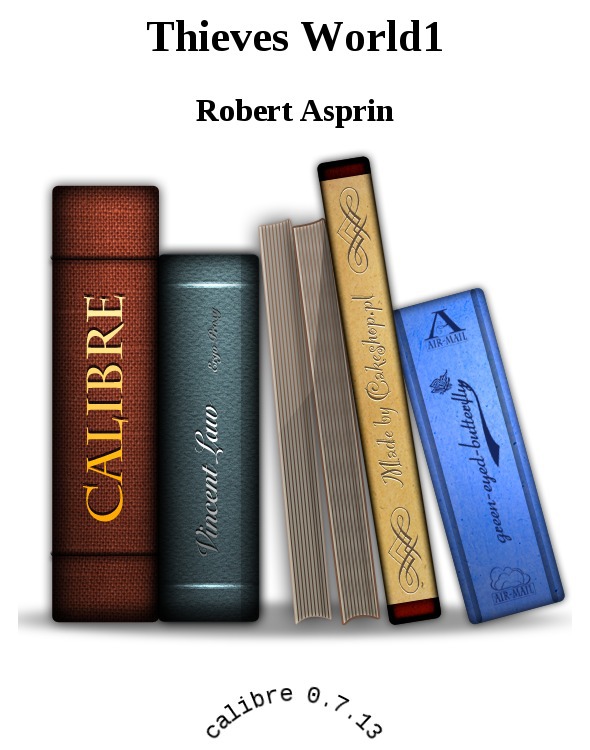 THE FACE OF CHAOS

THE GATE OF THE FLYING KNIVES

THE PRICE OF DOING BUSINESS

THE SECRET OF THE BLUE STAR

THE MAKING OF THIEVES' WORLD

The perceptive reader may notice small inconsistencies in the characters appearing in these stories. Their speech patterns, their accounts of certain events, and their observations on the town's pecking order vary from time to time.

These are not inconsistencies!

The reader should consider the contradictions again, bearing three things in mind.

First; each story is told from a different viewpoint, and different people see and hear things differently. Even readily observable facts are influenced by individual perceptions and opinions. Thus, a minstrel narrating a conversation with a magician would give a different account than would a thief witnessing the same exchange.

Second; the citizens of Sanctuary are by necessity more than a little paranoid. They tend to either omit or slightly alter information in conversation. This is done more reflexively than out of premeditation, as it is essential for survival in this community.

Finally, Sanctuary is a fiercely competitive environment. One does not gain employment by admitting to being 'the second-best swordsman in town'. In addition to exaggerating one's own status, it is commonplace to downgrade or ignore one's closest competitors. As a result, the pecking order of Sanctuary will vary depending on who you talk to ... or more importantly, who you believe.

'But surely Your Excellency can't dispute the facts of the matter!'

The robed figure of the Emperor never slackened its pacing as the new leader of the Rankan Empire shook his head in violent disagreement.

'I do not dispute the facts, Kilite,' he argued, 'But neither will I order the death of my brother.'

'The blood of our father flows in both our veins,' the Emperor countered, 'and I'll have no hand in spilling it.'

'But Your Excellency,' Kilite pleaded, 'Prince Kadakithis is young and idealistic ...'

'... and I am not,' the Emperor finished. 'You belabour the obvious, Kilite. That idealism is my protection. He would no more lead a rebellion against the Emperor - against his brother - than •'. I would order his assassination.'

'It is not the Prince we fear. Your Excellency, it's those who would use him.'

The adviser was adamant. 'If one of his many false-faced followers succeeded in convincing him that your rule was unjust or inhumane, that idealism would compel him to move against you even though he loves you dearly.'

The Emperor's pacing slowed until finally he was standing motionless, his shoulders drooping slightly.

'You're right, Kilile. All my advisers are right.' There was weary resignation in his voice. 'Something must be done to remove my brother from the hotbed of intrigue here at the capital. If at all possible, however, I would hold any thoughts of assassination as a last resort.'

'If Your Excellency has an alternative plan he wishes to suggest, I would be honoured to give it my appraisal,' Kilite offered, wisely hiding his feelings of triumph.

'I have no immediate plan,' the Emperor admitted. 'Nor will I be able to give it my full concentration until another matter is settled which weighs heavily on my mind. Surely the empire is safe from my brother for a few more days?'

'What is the other decision demanding your attention?' the adviser asked, ignoring his ruler's attempt at levity. 'If it is something I might assist you in resolving...'

'It is nothing. A minor decision, but an unpleasant one nonetheless. I must appoint a new military governor for Sanctuary.'

'A small town at the southern tip of the empire. I had a bit of trouble finding it myself - it's been excluded from the more recent maps. Whatever reason there was for the town's existence has apparently passed. It is withering and dying, a refuge for petty criminals and down-at-the-heels adventurers. Still, it's part of the empire.'

'And they need a new military governor,' Kilite murmured softly.

'The old one's retiring.' The Emperor shrugged. 'Which leaves me with a problem. As a garrisoned empire town, they are entitled to a governor of some stature

- someone who knows the empire well enough to serve as their representative and go-between with the capital. He should be strong enough to uphold and enforce the law - a function I fear where the old governor was noticeably lax.'

Without realizing it, he began to pace again.

'My problem is that such a man could be better utilized elsewhere in the empire. It seems a shame to waste someone on such an insignificant, out-of-the-way assignment.'

The Emperor looked at his adviser for a long moment. Then both men began to laugh.

Hakiem the Storyteller licked the dust from his lips as he squinted at the morning sun. It was going to be hot again today - a wine day, if he could afford wine. The little luxuries, like wine, that he allowed himself were harder to come by as the caravans became fewer and more infrequent. His fingers idly seeking a sand-flea which had successfully found its way inside his rags, he settled himself wearily in his new roost at the edge of the bazaar. Previously, he had frequented the large wharf until the fishermen drove him off, accusing him of stealing. Him! With all the thieves that abound in this town, they chose him for their accusations.

He looked about him and saw a band of six urchins descending on him, their eyes bright and eager.

'Good morning, children,' he grimaced, exposing his yellow teeth. 'What do you wish of old Hakiem?'

'Tell us a story,' they chorused, surging around him.

'Be off with you, sand-fleas!' he moaned, waving an arm. 'The sun will be hot today. I'll not add to the dryness of my throat telling you stories for free.'

'We'll fetch you water,' promised another.

The last offer caught at Hakiem's attention like a magnet. His eyes fastened hungrily on the copper coin extended in a grubby hand. That coin and four of its brothers would buy him a bottle of wine.

Where the boy had gotten it mattered not - he had probably stolen it. What concerned Hakiem was how to transfer the wealth from the boy to himself. He considered taking it by force, but decided against it. The bazaar was rapidly filling with people, and open bullying of children would doubtless draw repercussions. Besides, the nimble urchins could outrun him with ease. He would just have to earn it honestly. Disgusting, the depths to which he had sunk.

'Very well, Ran-tu,' he smiled extending his hand. 'Give me the money, and you shall have any story you wish.'

'After I hear the story,' the boy announced haughtily. 'You shall have the coin

'So it is.' Hakiem forced a smile. 'Come, sit here beside me so you can hear every detail.'

The boy did as he was told, blissfully unaware that he was placing himself within Hakiem's long, quick reach.

'Now then, Ran-tu, what story do you wish to hear?'

'Tell us about the history of our city,' the boy chirped, forgetting his pretended sophistication for the moment.

Hakiem grimaced, but the other boys jumped and clapped their hands with enthusiasm. Unlike Hakiem, they never tired of hearing this tale.

He shoved roughly at the forest of small legs before him, clearing a small space in the ground which he swept smooth with his hand. With quick, practised strokes, he outlined the southern part of the continent and formed the north

'The story begins here, in what once was the kingdom of Ilsig, east of the Queen's Mountains.'

'... which the Rankans call the World's End Mountains ...' supplied an urchin.

'... and the Mountain Men call Gunderpah ...' contributed another. Hakiem leaned back on his haunches and scratched absently.

'Perhaps,' he said, 'the young gentlemen would like to tell the story while Hakiem listens.' .'• •

'No they wouldn't,' insisted Ran-tu. 'Shut up, everyone. It's my story! Let Hakiem tell it.'

Hakiem waited until silence was restored, then nodded loftily to Ran-tu and continued.

'Afraid of invasion from the then young Rankan Empire across the mountains, they formed an alliance with the Mountain Tribes to guard the only known pass through the mountains.'

He paused to draw a line on his map indicating the pass.

'Lo, it came to pass that their fears were realized. The Rankans turned their armies towards Ilsig, and they were forced to send their own troops into the pass to aid the Mountain Men in the kingdom's defence.'

He looked up hopefully and extended a palm as a merchant paused to listen, but the man shook his head and moved on.

'While the armies were gone,' he continued, scowling, 'there was an uprising of slaves in Ilsig. Body-servants, galley slaves, gladiators, all-united in an effort to throw off the shackles of bondage. Alas ...'

He paused and threw up his hands dramatically.

'... the armies of Ilsig returned early from their mountain campaign and put a swift end to the uprising. The survivors fled south ... here ... along the coast.'

He indicated the route with his fingers.

'The kingdom waited for a while, expecting the errant slaves to return of their own volition. When they didn't, a troop of cavalry was sent to overtake them and bring them back. They overtook the slaves here, forcing them back into the mountains, and a mighty battle ensued. The slaves were triumphant, and the cavalry was destroyed.'

He indicated, a point in the southern portion of the mountain range.

'Aren't you going to tell about the battle?' Ran-tu interrupted.

'That is a story in itself... requiring separate payment,' Hakiem smiled. The boy bit his lip and said nothing more.

'In the course of their battle with the cavalry, the slaves discovered a pass through the mountains, allowing them to enter this green valley where game was plentiful and crops sprang from the ground. They called it Sanctuary.'

'That's because the slaves were dumb and overworked the land,' countered another.

'My dad used to be a farmer, and he didn't overwork the land!' argued a third.

'Then how is it you had to move into town when the sands took your farm?'

'I want to hear my story!' barked Ran-tu, suddenly towering above them. The group subsided into silence.

'The young gentleman there has the facts of the matter right,' smiled Hakiem, pointing a finger at the second urchin. 'But it took time. Oh' my, yes, lots of time. As the slaves exhausted the land to the north, they moved south, until they reached the point where the town stands today. Here they met a group of native fishermen, and between fishing and farming managed to survive in peace and tranquillity.'

'No,' agreed Hakiem. 'The gods did not will it so. Rumours of a discovery of gold and silver reached the kingdom of Ilsig and brought intruders into our tranquility. First adventurers, and finally a fleet from the kingdom itself to capture the town and again bring it under the kingdom's control. The only fly in the kingdom's victory wine that day was that most of the fishing fleet was out when they arrived, and, realizing the fate of the town, took refuge on Scavengers' Island to form the nucleus of the Cape Pirates, who harass ships to this day.'

A fisherman's wife passed by and, glancing down, recognized the map in the dust, smiled, and tossed two copper coins to Hakiem. He caught them neatly, elbowing an urchin who tried to intercept them, and secreted them in his sash.

'Blessings on your house, mistress,' he called after his benefactor.

'What about the empire?' Ran-tu prompted, afraid of losing his story.