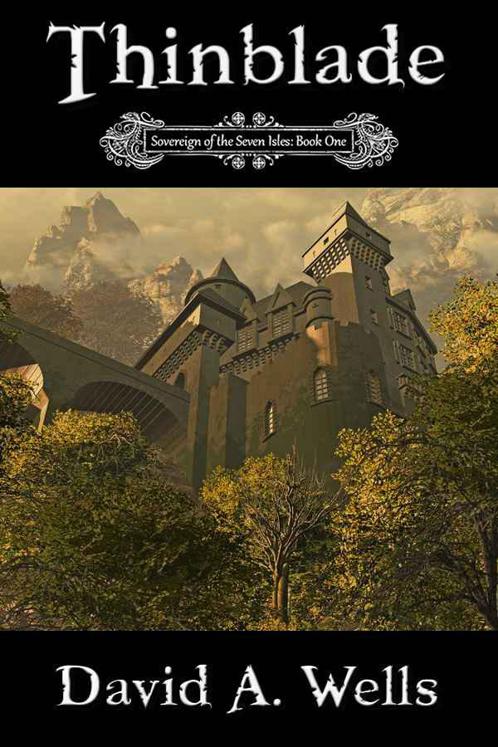 Sovereign of the Seven Isles: Book One

This is a work of fiction. Characters, events and organizations in this novel are creations of the author’s imagination.

To Mom and Dad. 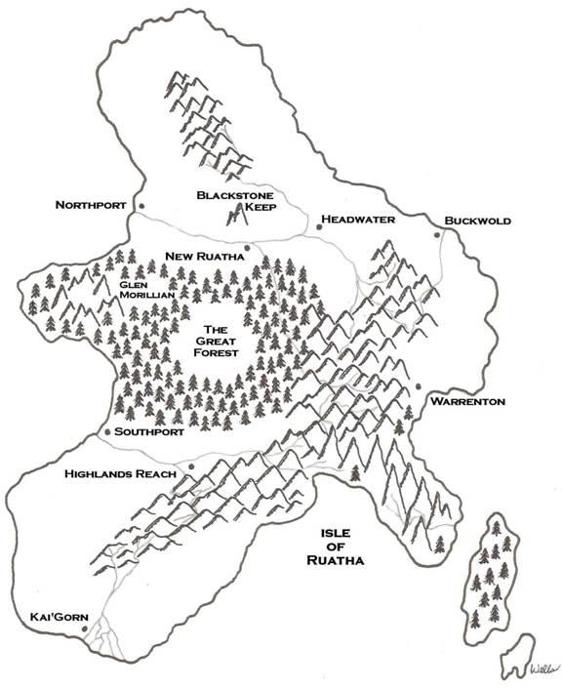 Alexander let the arrow fly. It was a clean shot, easily two hundred feet across the pasture. The wolf yelped and squealed in pain before stumbling to the ground and mewling for a few moments until it fell still and silent. The other wolves scattered a bit, looking for the threat.

“Nice shot,” Darius said as he drew, sighted, and loosed his arrow. It glided silently in a gentle arc and hit another wolf in the haunch. The wolf barked in pain and hobbled into the wood line. Darius frowned.

Abigail loosed her arrow and missed again. She muttered something under her breath.

Their father had sent them to hunt a pack of wolves that had been killing calves in the north pasture. They’d been at it for a few days and were finally having some luck.

“Be still. They haven’t seen us,” Darius said as he nocked another arrow.

Alexander shot again. He wanted to be done with this and go home. Another wolf fell. His arrow had caught it broadside, pinning it to the ground.

Darius and Abigail both hit the same wolf.

“Hey!” Abigail shot her brother a dirty look. She hadn’t gotten anything all morning and now her first kill was compromised by her older brother’s arrow.

He smiled, nocking another arrow.

Abigail scowled, then abruptly drew another arrow and took careful aim of an empty wood line. She relaxed the tension on her finely crafted composite bow and rested it in her lap as she sat astride her horse, huffing at the lack of a target.

“Let’s go get our pelts.” Darius clicked to his horse, urging her forward. Alexander and Abigail followed.

Alexander relaxed the focus on his vision and looked for the telltale colors of a living aura. When he was about thirteen, he discovered that he possessed magic. Magic wasn’t common, but it wasn’t exactly unheard of either. His parents both had it. When he realized what the colors were, he started training himself to see them whenever he wanted. After eleven years of practice it had become second nature.

He saw the colors of three wolves just inside the wood line; one aura was fading. That was one of the things the colors told him: dead things didn’t have an aura. The wolf that Darius had shot was dying and its colors were going dark.

“Two left,” Alexander said as he rested his bow on his saddle horn. He scanned the range for any potential threats.

That was when he saw the man on the horse. Only, he saw him a second too late. A long black arrow drove straight through Darius’s leather breastplate and into his chest with such force that it didn’t stop until six inches of the shaft were sticking out of his back. Darius grunted, slumping forward in his saddle.

Alexander loosed a quick shot at the man, then dropped his bow into its sheath.

Both moved up alongside their wounded brother.

Alexander grabbed him by the back to steady him in his saddle, carefully sitting him up straight so he could get at the arrow. He grabbed the shaft close to the breastplate and snapped off the feathered end.

Darius cried out in pain.

Alexander fixed Abigail with a hard look. “Grab his reins.”

He took hold of the arrow, pulled it through and slipped it into his quiver.

Darius let out a strangled wail of pain and slumped forward, unconscious.

Alexander swung his leg over the side of his horse and expertly switched horses, sliding behind his brother. He pulled Darius up and held him against his chest with one hand while taking the reins from Abigail with the other. He turned for the northern ranch house and kicked the horse into a fast but steady walk.

Abigail took the reins of Alexander’s horse and turned to look for the man who’d attacked her brother, but he was nowhere to be seen.

They made it to the ranch house within an hour. About thirty-five people lived there, including house staff and the hired hands that worked the northern property. More importantly, they had a healer, a wagon, and fresh horses.

As they came into the yard, Alexander called out, “I need the healer!”

The head cook turned and rushed off to find the resident healer.

Alexander turned to a group of three ranch hands and barked his orders, “I need a fresh horse saddled and ready to ride right now.”

They looked at him in surprise, but didn’t react.

“Now!” Alexander bellowed, causing them to spring toward the stables.

Abigail quickly dismounted to help Darius down off the horse. The healer came rushing up at the same time and helped her slip him gently to the ground.

As the house staff descended and the healer went to work, Alexander pulled Abigail aside. “Ride to the manor house and tell Lucky what happened. I’ll be right behind you with Darius.”

The stableman ran up, leading the fresh horse Alexander had demanded.

“Just in time,” Alexander said as he took the reins and handed them to his sister. “Ride fast.” He helped her into the saddle and slapped the horse on the rump. Abigail goaded the horse on as he sprang into a gallop.

Alexander knew it was bad.

“Stableman, prepare your fastest wagon with your best team of horses to carry my brother to Valentine Manor,” Alexander commanded. He didn’t like ordering people around, but today was different.

The stableman nodded, “Right away, sir.” He turned and ran toward the stables, shouting orders along the way.

Alexander returned to Darius to get a report from the house healer. He could see from the look in the man’s eyes that his fears were justified. The healer had no magic and could do little more than stop the bleeding, put healing salve on the wounds, and bandage him up.

The stableman pulled up a few moments later with a two-horse carriage that looked fast enough. Alexander and the healer supervised the loading of his brother. They placed him on a pallet covered with straw mats and layered wool blankets, gently lifted the whole pallet into the back of the wagon, and covered him with more blankets to keep him warm. The healer climbed aboard to attend to Darius during the trip while Alexander took his place at the reins.

Four of Valentine Manor’s security men trotted up on horseback and took positions around the wagon to provide protection along the way. The ride seemed tortuously long to Alexander. He checked frequently with the healer but the answer was always the same: No change.

When Alexander turned the wagon off the main ferry road and up toward Valentine Manor, he saw Anatoly and twenty of his men riding toward him fast.

“Is he alive?” Anatoly called out as soon as he was close enough to shout.

Alexander gave a curt nod and could see the relief on Anatoly’s face. Anatoly motioned for his men to continue ahead as he stopped to talk with Alexander.

“What happened?” His voice was level but his face had a look of pent-up thunder. He’d all but raised the three of them. Anatoly Grace had been the family man-at-arms for over twenty years. He was their mentor and their father’s best friend. But more than that, he was the family protector, and one of his charges had just been badly hurt.

Alexander quickly told him what he knew: “A man on a horse caught us by surprise from the wood line and hit Darius. I sent an arrow at him and then took Darius to the north ranch house.”

Anatoly nodded, “Good man.” He kicked his horse into a gallop and over his shoulder called out, “I’ll find him.”

Alexander smiled grimly. The man on the horse wouldn’t get away, Alexander was sure of that much.

He continued up the road and moments later saw a second party on horseback moving at full gallop toward him. It was his parents and Lucky with his assistant in tow and Abigail, racing ahead with her silvery blond hair glowing in the sunlight.

They came up in a rush as Alexander stopped the wagon.

Duncan Valentine was off his horse before it could stop. He hit the ground running, took one step on the side of the carriage, vaulted onto the buckboard, climbed over, and knelt down next to his son.

Lucky stayed mounted so he could see into the carriage for his initial assessment. He didn’t like what he saw.

Bella Valentine looked into the back of the carriage and gave a low tortured moan when she saw her eldest child. Her face went white.

As his family arrived and swarmed the carriage, Alexander could feel the burden of responsibility slip away. He stepped off to the side of the road and sat down. The shakes soon followed.

“Are you all right?” Abigail asked softly as she sat down next to him. He nodded to her and smiled tightly even though he couldn’t stop shaking. She sat quietly for several minutes, simply offering him the comfort of her presence.

“Lucky says his chances are good.” She sounded a bit too worried to be reassuring. “Come on.” Abigail stood up and offered Alexander her hand. “Let’s go home.”

The wagon started moving again with Lucky and the healer in back and Duncan and Bella in front, driving the wagon toward Valentine Manor.

Darius was unconscious and could breathe only when he was rolled onto his side. Lucky had done everything he could do. He’d worked through the afternoon trying to save the young man who was heir to Valentine Manor.

Lucky, Aluicious Alabrand, was a Master Alchemist. He stood just under six feet tall, wore a crown of silver-white hair around a bald head and carried his ample belly as if it were a testament to his skills in the kitchen. Lucky was an able healer, but he feared that Darius was beyond his ability. The young man had developed a fever that wouldn’t respond to any of Lucky’s potions, and Lucky couldn’t figure out why. Darius should be healing, but he was getting worse. Lucky looked at the door to the waiting room.