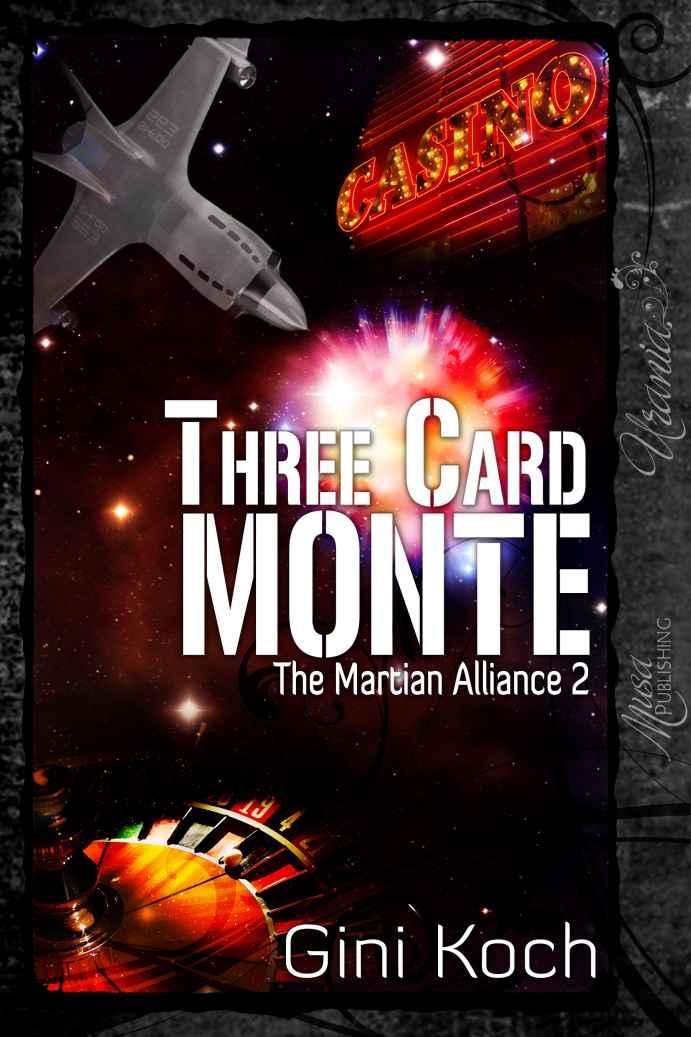 An imprint of
Musa Publishing

This e-Book is a work of fiction. While references may be made to actual places or events, the names, characters, incidents, and locations within are from the author’s imagination and are not a resemblance to actual living or dead persons, businesses, or events. Any similarity is coincidental.

This e-Book is licensed to the original purchaser only. Duplication or distribution via any means is illegal and a violation of International Copyright Law, subject to criminal prosecution and upon conviction, fines and/or imprisonment. No part of this ebook can be reproduced or sold by any person or business without the express permission of the publisher.

To the fans who told me they bought an e-reader or
got e-reading software on their computers
just to be able to read this series,
I have but one thing to say:
You all ROCK and this one’s for you!

“I
NTERESTING
N
EWS
F
ROM
R
OULETTE
,” Dr. Wufren shared with us, his watery blue eyes twinkling, as we all sat down to dinner.

“And from Polliworld,” Bullfrog added, as he grabbed his plate from one of Tresia’s pincers.

“Is this paying news or just gossip?” Roy asked.

Doven’s feathers ruffled. “Why does the news need to be paying? Don’t we still have plenty left over from our last job?”

Our last job had been a complicated con for the Andromeda Royal Family. As far as I knew, we still had plenty left over.

Everyone looked expectantly at Roy. He grimaced. “You know, we’re not just supporting ourselves. We’re helping to run an underground resistance.”

Kyle rolled his eyes. “Here it comes, DeeDee,” he said to me in a stage whisper. “The ‘Martian Alliance Speech’ again.”

Roy gave his little brother a dirty look. “You, of all people, should care.”

I patted Roy’s knee. “It’s okay, oh captain, my captain. We’re all one with the cause.”

The others all nodded or murmured their assent, most with their mouths full. We were all focused on restoring the galaxy to what it had been before the Diamante Families had taken over, but empty stomachs were a more immediate need.

Bullfrog grinned, always unnerving because giant walking toads having lots of teeth made most of the other humanoid races nervous. Long tongues were one thing; teeth like any other carnivore in the galaxy were another. “I think the news might be both.”

“Both what?” Roy asked. He was really testy. I had no idea why. I ran through possibilities: he and I hadn’t had a fight; Kyle hadn’t done anything foolhardy; no one we liked had recently been listed as dead, maimed or injured; and there were no Diamante cruisers anywhere in sight.

Sure, we were in the middle of nowhere, space-wise. We’d learned a long time ago to take our time between big jobs. Maybe it was boredom.

Dr. Wufren nodded. “But we can wait until after dinner to share.”

“No, go ahead.” Roy sounded resigned.

I checked everyone else out. No one else appeared upset. Until I looked at Doven. Because he was a Quillian, and so half-man/half-bird, it was hard to tell when he was emotional unless his feathers were ruffled. And ruffled they were. Just a bit, and he flattened them when he caught me looking at him.

So Roy and Doven were fighting? This was unusual to say the least. However, Dr. Wufren’s next words moved the Roy and Doven issue down to second place for my attention.

“Monte the Leech has sold part interest in the Palace and is personally opening a new casino on Polliworld.”

It was hard to turn the crew of the
Hummingbird
speechless, but this news did the trick. We all stared, open-mouthed, at the good doctor—except Bullfrog and Dr. Wufren himself, both of whom looked smug about having been the ones to break this galaxy-shaking news.

“You want the official reason or the real one?” Bullfrog asked.

“Per the press releases,” Dr. Wufren said, “Monte’s done so well with the Palace on Roulette that he wants to expand and bring the excitement of live gambling to the world that likes it best.”

“That sounds reasonable,” Tresia said. “He could open one on Arachnius, too. I believe we’re second in terms of overall planetary adoration of games of chance.”

Bullfrog snorted. “The doc left out a key piece of information. Two, really.”

Ciarissa smiled at Dr. Wufren. “You do like to make a statement, don’t you Fren?”

“When I can, my dearest. When I can. As our noble Bullfrog has pointed out, the press reports are avoiding two key pieces of information. First: Monte sold that part ownership of the Palace to the Diamante Families.”

“Who knows, my boy? However, the second bit of information held back is that Monte’s co-owners on dear Bullfrog’s home world are the Polliworld Underground.”

We were all quiet again, thinking. Kyle broke the silence first. “So? What do we do?”

Roy grinned. “We go visit our old friend to congratulate him on his new business expansion and see where we can get in on the action.”

Once dinner was finished, Roy set a slow course for Polliworld. We’d jump to hyperspace after everyone had slept. Some spacers would let their crews sleep during a long jump, but not Roy. He wanted everyone awake and alert when we jumped, in case anything went wrong. It was one of the reasons he was a great captain and leader.

Standard procedure when we were simply cruising through space was that Roy would take one shift in the captain’s chair and Doven the other. On rare occasions, Kyle was allowed this honor. At least, Roy acted like it was an honor to be the only person awake watching a lot of nothing from the cockpit.

Doven took the first shift. I watched him and Roy closely—something was still wrong between them.

I waited until Roy and I were in bed, in part to ensure no one else would hear. The biggest reason was that I enjoyed seeing Roy naked, and didn’t want to risk triggering a “storm out of the room” reaction.

Not that anyone would blame me for wanting to see Roy, dressed or otherwise. He was tall, handsome, with blue eyes and light brown hair, and was all wiry muscle. He was dressed like normal, in tight pants and shirt, with a double-laser belt and high boots, which was what most spacers from Mars wore.

Roy radiated masculinity even when he was asleep—even more so as he undressed. I drooled a little, but that happened regularly. Seeing as he was ready and willing to again consummate our relationship, I decided the question could wait.

It waited a good long while, emphasis on long. And good. Really, great. As always.

“So, what’s going on with you and Doven?” I asked as we lay together in the afterglow.

“Right, pull the other one. I can tell. Doven’s giving off signs and so are you. I want to know what happened. And I’m willing to keep asking you for the foreseeable future.”

“Gosh, I don’t need Ciarissa’s, or any other telepath’s, help to guess that. What about?”

“Funny you should mention her. Ciarissa, as a matter of fact.”

“Doven thinks we’ve been working her too hard.”

I considered this. “Did Doven make a move on Ciarissa while I was on Andromeda?”

“She knows he likes her. Doesn’t she? I haven’t talked to her about Doven, but I mean, come on, she’s one of the strongest telepaths in the galaxy, if not
the
strongest. Why doesn’t he just tell her he wants to be more than friends?”

“You know, you feel free to have this romantic discussion with my first mate and navigator. As far as I’m concerned, he’s questioning my command decisions without legitimate cause and I’m tired of it.”

I knew when to let something drop. I snuggled closer and stroked Roy’s chest. He relaxed and was asleep soon.

I was wide awake. Like me, Doven was one of the last of his kind. Not the last Quillian, but among the last Quillians with what they called Shaman Powers. If it flew, Doven could alter its shape, any time, anywhere.

The Diamante Families had done their best to wipe out the Shaman branch of the Quillian population, just as they had with shape shifters like me. I wasn’t sure how many were left, but Doven and I were both high up on the extinction list.

Run! by Patricia Wentworth
To Heaven and Back by Mary C. Neal, M.D.
Enigma: Prologue to Live Wire by Lora Leigh
To Honor You Call Us by Harvey G. Phillips, H. Paul Honsinger
Raven Moon by Eva Gordon
Sometime Soon by Doxer, Debra
The Lake of Sorrows by Rovena Cumani, Thomas Hauge
(2005) Wrapped in Rain by Charles Martin
The Seventh Lost Tale of Mercia: Hildred the Maid by Jayden Woods
Deuce's Dancer by Patricia Green