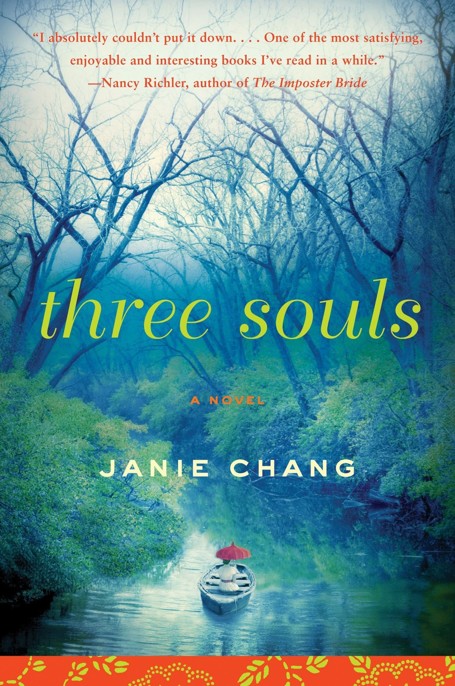 For my mother, Mao Lei

W
e have three souls, or so I’d been told.

But only in death could I confirm this.

The moment the priest spoke the last prayer and sealed my coffin, I awoke and floated upward in a slow drift of incense smoke, until I could travel no farther. I settled in the rafters of the small temple, a sleepy wraith perched in the roof beams. I had knowledge, but no memory. My first thoughts were confused, for clearly this was the real world. But surely I no longer belonged here. When would I take my journey to the afterlife?

Below me, pale winter sunlight from an open doorway illuminated the temple’s dark slate floors. Men and women in white robes crouched in front of an altar stained by decades of burning incense sticks. Noise assailed me from all directions. The tapping of wood-block instruments, the wailing of paid mourners, the chanting of acolytes. On the altar, a wooden tablet gleamed, gold-painted characters carved into its newly varnished surface. An ancestral name tablet, carved for a family shrine.

I recognized that name. My name.

It was when the priests had finished their chanting that I saw my souls for the first time, three bright sparks circling in the air beside me. They were small, shining, and red as embers, but I knew that to the living they were as invisible as motes of dust.

One of the sparks floated in a lazy arc to rest atop the varnished tablet. A delicate rustling at the back of my mind said this was my
yang
soul. I could feel its presence, stern and uncompromising. My
yin
soul wafted down to settle on the coffin, a careless, almost impudent movement. My
hun
soul stayed beside me, watchful as a cat in a strange neighbourhood.

I turned to my
hun
soul, a question forming in my still-sleepy mind, when a small, pale face in the crowd below caught my eye. A little girl in mourning robes of white, white ribbons woven through her braids. She knelt behind a man bent so low with weeping his forehead touched the slate floor. The girl shuffled on her knees and the elderly woman beside her put a warning hand on her back. Obediently the little girl stooped down again, her expression blank but for the slightest quiver of her lips. Her dark eyes were dull and rimmed with red. They should have been bright, alive with curiosity.

How did I know that about her eyes?

Memory flickered and I recognized the little girl. My daughter. Weilan. She was so still, so silent. I snapped into wakefulness and in the next moment, I was beside her on the slate, my arms around her thin shoulders.

Mama is here, my precious girl. I’m still with you.
But I couldn’t feel her. I drew back, suddenly cautious. I didn’t want to frighten her. I was dead.

She took no notice of me and that made me weep, my relief struggling with disappointment, for although I longed to hold her, I didn’t want to give her nightmares about her mother’s ghost. I stayed kneeling beside her, whispering all the pet names I used to call her:
Small Bird, Sesame Seed, My Only Heart.

I hoped for a tiny gap between our worlds, a crack that would allow my comforting thoughts to reach her even if words could not. She was only six, so young to be motherless. Who would listen to her chant her times tables now and rub her cold hands on winter days? Who would arrange a marriage for her and teach her how to embroider cloth slippers as gifts for her husband’s family?

A restless, elusive tugging sensation told me I didn’t belong in this world, but I vowed to resist for as long as possible. If there was any way I could take care of my child, even if I couldn’t be seen or felt or heard, I wouldn’t abandon her until it became impossible for me to stay.

Borne aloft on the sturdy shoulders of hired mourners, my coffin left the courtyard. I followed, drifting beside my daughter as the funeral procession travelled through the streets of the town, my
yin
soul riding on top of the coffin. Beside my final resting place, I watched the ceremonies. The man who had been weeping arranged food offerings in front of the grave. Weilan lit a bundle of incense sticks, her small hands nearly blue with cold.

Tense and anxious, I watched as the coffin was placed in its grave. Surely once my body was buried, I would be snatched away to the afterlife.

But nothing happened. I was still here.

I returned to town with the funeral cortège, but my
yin
soul remained behind at the grave, and in my mind’s eye it shared with me what it saw. Workers were piling earth into a smooth mound on top of my burial spot.

When they finished, however, I didn’t drift upward, nor did my consciousness fade into oblivion. When was I supposed to begin my journey to the afterlife?

At the front gates of the estate, fewer than a dozen people entered, all that remained once the mourners had been paid off.

“Come, Granddaughter,” said the old woman. Her voice sounded tired, strained but kind. This was, had been, my mother-in-law. She would be the one to bring up my daughter now. “I told Old Kwan to have some sweet-date soup waiting for us. Let’s go and warm up in the dining room.” She led Weilan away.

I stood waiting by the temple, my mind full of questions. Finally my
yin
soul returned, sliding along a thin shaft of winter sunlight. It joined the two other sparks in a slow circling above the altar.

I’m dead and buried,
I said to them.
Am I not supposed to leave this earth now? Or will the gods let me stay to watch over my child?

But they ignored me and I drifted among the rafters of the temple, silent and perplexed.

My souls spiral down and come to rest on the altar.

We are ready now,
says a stern voice, and there is a taste of mustard at the back of my tongue. My
yang
soul. Although his red spark remains balanced on the wooden tablet, an elderly man wearing a round scholar’s cap appears beside the altar. He resembles my grandfather as I’ve seen him in photographs, with steel-rimmed glasses and a goatee. He is dressed in a high-necked
changshan
gown of deep blue silk over loose black trousers.

Yes, let’s begin.
A new voice tinkles like wind chimes, accompanied by the scent of camellia. The bright ember of my
yin
soul dances in mid-air, circling the confines of the courtyard. She comes to rest beside the old scholar, a schoolgirl of fifteen with deep brown eyes below wispy bangs, a long pigtail thrown over one shoulder. Her ankle socks and navy uniform blazer match perfectly, her white blouse is spotless.

Leiyin needs to remember,
says a third voice. My
hun
soul flies down from the beams overhead and I feel my hair being pulled, a light, playful tug. Its image joins the other souls. It manifests as a silhouette of light, shaped like a human, as brilliant as the morning sun and as featureless.
Before she can ascend to the afterlife, she needs to understand the reason for her detention in this world.

This is punishment? This doesn’t look like hell,
I say, feeling a wave of panic.
Where is the underground maze? What about the fanged demons, the chambers of torture? What is this twilight existence if not the afterlife?

This isn’t hell, nor is it the true afterlife.
My
yang
soul turns to me, a slight scowl on his seamed face.
You could say it’s the afterdeath. And you’re still here because in life you were responsible for a great wrong.

I don’t remember anything about a great wrong.
Bewildered as much as indignant, I want to remember my life. Surely I was not, had not been, a criminal.

Soon you’ll remember everything and so will we.
My
yin
soul pulls the ribbon off her pigtail and shakes out her hair. She begins braiding it again.
Relive your memories. Only then will you understand what you must do to ascend to the afterlife.

And why do I need to ascend anyway?
I know I sound sulky, rebellious.

As soon as I ask this question, an eager swirl of emotions radiates from my souls. In my mind’s eye I see them, three red sparks lifting into the air toward a portal that spills golden light over the horizon. Beyond the portal flicker tantalizing glimpses of grassy landscapes, mountain lakes, and eternally blossoming orchards. This vision makes me yearn to rise up toward that portal and join my souls. Now I understand the restlessness that invades my being, an upward pull I can’t follow so long as the manacles of my sins weigh me down to this world.

We must ascend. Reincarnation awaits us in the afterlife.
My
yin
soul spins so that her pleated skirt twirls up around her, a circle of navy blue.
There, we will have a chance for new lives, new hope. But if we stay too long in this existence . . .
As her voice trails off, I hear in it a small tremor.

First, she must remember,
my
hun
soul interjects. It reaches out a shining limb and pulls my hair again, this time a firm and peremptory tug.
You must understand the damage you did. Then you must make amends to balance the ledger. Only then can we ascend together to the true afterlife.

So we will go together? You won’t go now and leave me here?
Relief.

We are your souls, we’re part of you,
my
yang
soul snaps.
We can’t leave until you do.
He glares at me through moon-shaped lenses.

Don’t mind
yang, says my
yin
soul, who has finished braiding her hair.
He’s not happy unless he’s berating someone.

Where should we begin?
my
hun
soul asks.
On the day of the party?

Yes, the day of the party,
the other souls agree.

The day you first stepped off the path that had been paved for you,
my
hun
soul says.

I have no choice. How else can I reclaim my memories, discover what to do next? At this moment I can’t even remember what Weilan looked like as a baby.

My
yin
soul sinks to the floor and tucks her knees under her skirt, a child waiting to hear a story. My
yang
soul settles on a stool near the door and brushes a cobweb from his black trousers. My
hun
soul drifts to the altar, and with a single bright fingertip gently strokes my name tablet.

Suddenly I’m standing on a street lined with sycamore trees and high, whitewashed walls. I’m watching a schoolgirl climb down from a rickshaw. But in that same moment, I’m also that girl, my foot about to touch the curb.

I know everything about my life before that moment.

I know nothing of what is to come.

F
or once I had been eager to leave school and get home. I jumped off the rickshaw as soon as it stopped outside the walls of our estate and darted through the wicket gate, dashing past Lao Li, who sat on guard just inside the entrance.

“No need to rush, Third Young Mistress,” the old gatekeeper called after me. “The guests won’t be here for at least two hours!”

For the party, he would change into an immaculate house uniform of grey tunic and trousers. He would push open the huge front gates while other servants swarmed to the entrance to guide carriages and sedan chairs into the forecourt and out again, smooth and practised as clockwork.