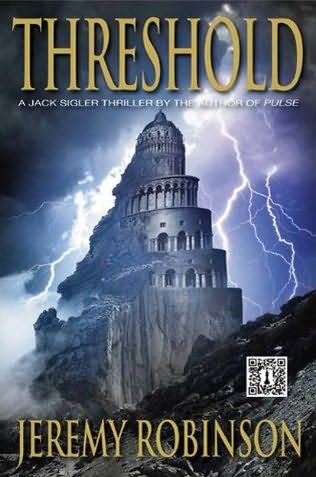 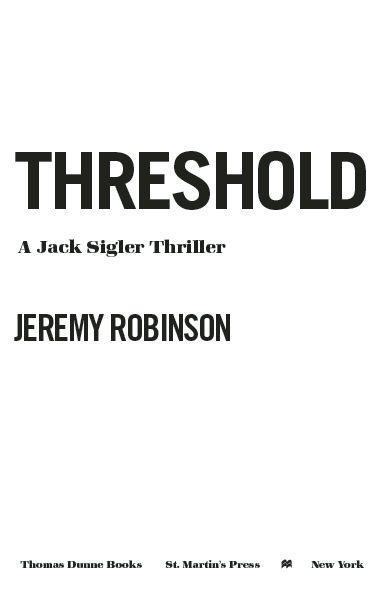 For Norah, Solomon, and Aquila,

because you’re at your best when you’re together.

Threshold
is my seventh novel. My third hardcover. And my best book to date—I know, I know, I have to say that, but it’s true! As I look back at the past few years I’m amazed and thrilled to see that the same people who supported me when I self-published my first novel, when I used three credit cards to start my own small press (Breakneck Books), and when I moved on to Thomas Dunne Books, are still in my life and as supportive as ever. So it’s with great appreciation that I thank the following.

Stan Tremblay and Walter Elly, you guys get top billing this year. The time and effort you two put into helping me with web design, social marketing, and something I’m typically not prone to do: relaxing, is amazing. Some people say that it takes a village to raise a baby. Well, I say it takes a village to write a novel. You guys are my village. C’mon, group man-hug!

For consummate proofreading and story comments, I once again thank Roger Brodeur.

Thanks to my agent, Scott Miller at Trident Media Group, who discovered my first self-published book, signed me on, and has been a shrewd counselor since. Thanks also to MacKenzie at Trident Media for being fast, diligent, and fun. Go team Miller!

Now for the people at Thomas Dunne Books, who put the Jack Sigler series on the map. Thanks to Peter Wolverton, my editor. Your advice has improved my story telling immensely, a gift for which I will always be grateful. Anne Bensson, you are an amazing source of fast answers to my endless questions and an awesome support. Rafal Gibek and the production team, if not for your awesome copy-edits, people would think I was a dolt. For the incredible jacket design, thanks to art director Steve Snider and illustrator extraordinaire, Larry Rostant, whose work has always impressed and inspired me.

And always last in my acknowledgments, but never least, I thank my kick-ass wife, Hilaree, who was graced with the ability to put up with and love a moody author and artist. And to my children, Aquila, Solomon, and Norah, you remind me what it means to be a child and help keep my imagination free of the prison known as adulthood. I love you guys.

Sick I am of idle words, past all reconciling,

Words that weary and perplex and pander and conceal,

Wake the sounds that cannot lie, for all their sweet beguiling;

The language one need fathom not, but only hear and feel.

5 But the Lord came down to see the city and the tower that the men were building. 6 The Lord said, “If as one people speaking the same language they have begun to do this, then nothing they plan to do will be impossible for them. 7 Come, let us go down and confuse their language so they will not understand each other.”

Mathematics is the language in which God has written the universe.

HE CONTROLLED THE
world through fear—merciless fear—conjured by the memory of genocide. He had scraped the earth clean, leaving only a single bloodline alive. To remember. To fear.

But Nimrod saw through the fear, watching how it manipulated the populace like silt stirred in the Euphrates. When the rains came and the thunder boomed, the people cringed and turned to the mysterious Originator for direction. When food was scarce, they tore at their clothes and begged for mercy.

The Originator demanded nothing less, despite his promise.

Nimrod doubted that such a promise had been made, just as he doubted the validity of the mass extermination story. It had been, no doubt, conjured by his great-grandfather to control the people. And he would not fear something or someone that was not real. He would not be controlled.

As a man, he learned that fear could motivate men to do
his
work. With whip, club, and spear, he had instilled a greater fear in men than the Originator could with the story of a deluge that few living people claimed to remember. It was with this fear that Nimrod came to power and laid the foundations of his kingdom. The cities of Uruk, Akkad, and Calneh flourished under his rule, finding plentiful food and water on the shores of two mighty rivers. But it was Babylon, nestled between the Tigris and Euphrates, that had become his greatest achievement.

The Hundred Days by Patrick O'Brian
Silver by Andrew Motion
Modeling Death by Amber Kell
Confess by Colleen Hoover
Just What She Wants by Barbara Elsborg
Magnolia Gods (River Sunday Romance Mysteries Book 2) by Thomas Hollyday
The Year of Broken Glass by Joe Denham
Thief of Hearts by Patricia Gaffney
War To The Knife by Grant, Peter
Her Mother's Hope by Francine Rivers