Read Through the Night Online 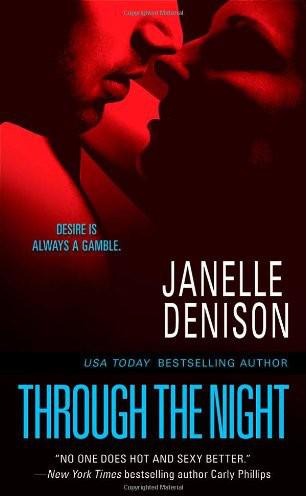 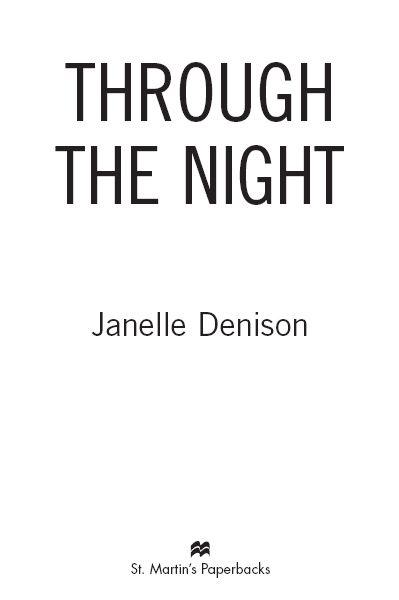 As the executive casino hostess for the Onyx in Las Vegas, Valerie Downing was used to watching high rollers excite a crowd, especially when Lady Luck was on their side and each roll of the dice paid off for everyone playing at their table.

In this instance, the game of choice was craps, and the person generating all the excitement was one of the hottest, sexiest men she’d ever laid eyes on. That was saying a lot, considering all the good-looking guys who’d come through the casino in the time she’d worked there.

Besides being blessed with a stunningly gorgeous face and a hard body made for all kinds of sin, he most captured her attention with the abundance of confidence and easygoing charm he exuded. The seductive, inviting curve to his lips when he smiled didn’t hurt, either. And judging by all the women surrounding him, each one blatantly vying for his attention, she wasn’t the only female currently admiring all that charisma and masculine sex appeal.

Standing just outside the gaming area, Valerie continued to keep an eye on the increasing action at the craps table, fairly certain that she’d be summoned to extend the hotel and casino’s VIP services to entice the man to stay. A gambler didn’t win a huge chunk of change at one of these tables only to leave and squander the cash elsewhere. Her job was to make sure the big winners stayed at the Onyx, and any further gambling was invested right back into their casino.

“Looks like you have a live one at the craps table.”

Valerie glanced at the petite blonde who’d come up beside her, amused by the note of interest in the other woman’s voice, and knew her friend was lusting over Gorgeous Guy. Skye Lambert, her roommate, worked as a cocktail waitress in the casino, had a bigger-than-life personality and a centerfold body that easily rocked her black miniskirt and lace-up corset uniform. She also had a huge appreciation for the opposite sex, though there was only one man in particular she wanted. Unfortunately,
he
treated Skye more like a little sister than like a woman who desired only him.

Another round of boisterous cheers drew Valerie’s attention back to the craps table and Gorgeous Guy. Apparently, he’d just rolled a great hand. “He’s definitely riding a lucky streak, and he’s making a ton of money for a lot of people, himself included.”

Skye sighed dreamily. “Doesn’t hurt that he’s a smoking-hot hunk with a face and body to die for. He’s not one of our regulars, is he?”

“No.” Valerie was familiar with the established high rollers, and she’d never seen this guy before today. She would have remembered him. “I’m just waiting for him to finish playing so I can offer my services and make sure he
becomes
a regular.”

Valerie laughed at her friend’s outrageous comment as Skye continued on her way to the bar to pick up a drink order.

Gorgeous Guy reached for the dice, but before he could toss them onto the table again, a curvy redhead who’d been by his side the entire afternoon grabbed his hand, brought his palm up to her pursed lips, and blew seductively on the dice for extra luck. Obviously enjoying the woman’s seductive tactics, he grinned like a rogue, then with a flick of his wrist he sent the dice tumbling across the green felt-covered table.

The croupier called out a triple, which meant another generous payout for everyone. The gamblers riding on Gorgeous Guy’s luck were loud in expressing their elation, and the same redhead who’d just blown on his dice now wrapped her arms around his neck and planted a zealous kiss of gratitude on his lips. When she finally let him breathe again, he was laughing and enjoying the spotlight. Then he started racking up his chips to cash out while the woman he was with continued to fawn all over him.

Valerie’s BlackBerry vibrated against her hip, and she pulled the device from its case and checked the message from the pit boss who’d been supervising the action.

Gorgeous Guy. She replied with a standard
I’m on it
to let the pit boss know she had the target in sight as he headed toward the cashier—
without
the woman who’d been all but glued to his side at the table.

While the man transferred his casino tokens into paper bills, Valerie made her way to the cashier area and waited patiently for him to finish his transaction.

A few minutes ticked by, giving her way too much idle time to check out what a fine example of male flesh he was. He was tall, with broad shoulders and lean hips, and the way he filled out a pair of Levi’s drew her gaze to his perfect ass. From where she stood, she had a great view of his profile, which showcased his chiseled features and the shape of his sensual lips. Dark blond hair, the color of rich butterscotch, fell in a tousled but appealing mess around his head and only enhanced his roguish good looks.

When he was finally done with the cashier, Valerie straightened her shoulders and approached him in a professional manner, their gazes meeting as she closed the distance between them. He did a slow, thorough sweep down the length of her body, then up again, a confident, bad boy gleam sparking to life in his bright green eyes.

By the time she reached him, she’d easily pegged his type. He was obviously a player, and she didn’t mean that in the gambling sense. Dealing with all sorts of people as a Vegas casino hostess, she’d become a pretty good judge of character, even without the benefit of touching the person. Considering he’d just left his girlfriend at the craps table, all signs pointed to him being the kind of guy who had one girl on his arm but still liked to keep his options open. And he was looking at her as if he wouldn’t mind her being his next conquest.

Reminding herself she had a job to do, Valerie extended her hand toward him. “Hi. I’m Valerie Downing, the executive casino hostess here at the Onyx.”

The corner of his mouth curved in an irresistible grin designed to make a woman weak in the knees. And damned if that smile didn’t work on her, too.

“Chase Pierson,” he replied, and clasped her hand in his.

The instant skin slid against skin, a current of rippling heat zinged up her arm and flooded her entire body with a surge of electricity. Touching him was the equivalent of coming into direct contact with a live circuit, and had the same effect of jolting her feminine senses to life.

Her nipples peaked hard and tight against her silk blouse—which his unabashed gaze noticed—and carnal vibrations shimmered through her, much like the beginnings of an orgasm. She gasped in shock at her body’s brazen response, and in a purely knee-jerk reaction, she yanked her hand back out of his grasp.

Oh, wow.
She stared at him, breathless and shaken, her heart racing in her chest as she tried to process what the hell had just happened, and if she’d been the only one affected.

His face registered surprise, telling her that he’d felt something, too, and wasn’t sure what to make of what had just transpired between them, either.

A residual tingling sensation made her hyperaware of how close he stood to her and the sexual energy pouring off him. A normal person would have chalked up that blast of heat to attraction and chemistry, but she wasn’t your average female.

As a clairvoyant, she was used to feeling emotions on a higher level, sometimes even seeing visions and images when she touched someone and opened herself up to the experience. She’d certainly felt a man’s attraction and interest during many casual handshakes, but this was different,
he
was different, and her response to him was more powerful than anything she’d ever encountered.

Absently rubbing her itchy palm down the side of her black slacks, she exhaled a deep breath and tried to act as though nothing out of the ordinary had happened—not an easy feat when just looking into his deep, rich, moss green eyes made her pulse trip all over itself again.

Good grief, what the heck was wrong with her? And why did
this
man have such a profound physical effect on her body and senses?

Since the answer to her own questions eluded her, she cleared her throat and focused on business. “I wanted to congratulate you on your win at the craps table and offer to comp you a room here at the Onyx for the weekend,” she managed in an even tone.

“I appreciate the offer,” he replied in a smooth, sensual drawl that matched his laid-back demeanor. “But I already have a room here at the hotel.”

“Great,” she said, pleased that he was currently a guest, which meant any further gambling would most likely be spent in their casino, and not a rival’s. “Then I’d be happy to cover the charges. If you’d just give me your room number, I’ll take care of everything for you.”

“No need.” That lazy smile came again. “My room has already been comped.”

She hadn’t expected that reply, and wondered if one of the other junior hosts, possibly a newbie, had already compensated him. They all reported directly to her for her approval on giveaways, and she hadn’t signed off on any rooms yet today. She’d have to check into who’d given him the special treatment, and why.

“How about dinner for two at our five-star restaurant, or tickets to a show on the Strip?” she suggested instead.

“Dinner for two?” he repeated, tipping his head as he considered the offer, and her, with undeniable interest. “Are you planning on joining me?”

The man was absolutely shameless. “I don’t think the woman you’re with would appreciate you two-timing her,” she said with humor, reminding him of the lady he’d left behind at the craps table.

A believable amount of confusion etched his expression. “Uh,
what
woman?”

She caught herself before she would have rolled her eyes at his oh-so-innocent act. “The one who kissed you after your big payout?”

Understanding dawned in his eyes. “Oh,
her.
” He lifted his broad shoulders in an unapologetically boyish shrug. “She was just an overzealous winner, and I’m not one to deny a woman a kiss, so I went with the flow. But I’m not with her—or anyone else, for that matter—which means I’d love for
you
to join me.”

Temptation beckoned, and she shook her head firmly. “Sorry, but those perks don’t extend to employees.”

It was a standard line she used with the many men who’d tried the same tactic, a way to let them down gently without offending their egos. And despite being intrigued by that sizzling handshake they’d just shared, Valerie saw that Chase Pierson had heartbreaker written all over him, and she’d had enough of that to last her a lifetime.

“The offer for dinner and show tickets still stands, if you’re interested,” she said.

He looked disappointed that she’d shot him down. “Thanks, but I’ll pass. I’m not one to dine alone, and I’m not much of a show guy, either.”

“I’m sure you could find someone to join you for the evening if you really wanted,” she said with an indulgent smile.
Like the woman at the craps table,
she thought as she withdrew a business card from the pouch clipped to the waistband of her slacks and handed it to him. “If you change your mind, or there’s anything I can do for you during your stay here, just give me a call.”