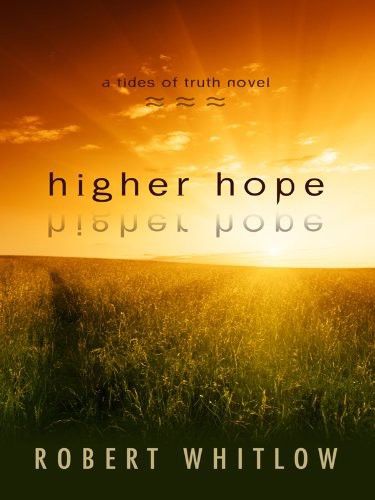 OTHER BOOKS BY ROBERT WHITLOW

Thomas Nelson, Inc. books may be purchased in bulk for educational, business, fund-raising, or sales promotional use. For information, please e-mail [email protected]

To those who believe hope is possible.
May it become substance in your life.

Against all hope, Abraham in hope believed.

THE AFTERNOON THUNDERSTORM THRASHED SAVANNAH WITH wet whips, the raindrops falling in waves that raced across the ground. Dark clouds spawned thin streaks of lightning that reached out with flashing fingers to bridge the gap between heaven and earth. One bolt struck the mast of a sailing yacht bobbing at anchor in a marina and destroyed the boat’s electronic navigation system before blowing an exit hole in the ship’s side that caused water to seep into the forward cabin. Vacationers on the beach and golfers on the greens ran for shelter. Shoppers at grocery stores backed up at the exits with their carts full. Residents of the city turned off air conditioners as the temperature dropped twenty degrees in ten minutes. Everyone sought cover to wait out the storm.

Everyone, that is, except one.

Ramona Dabney didn’t budge from the blue rocker on the narrow front porch of her house. The porch was only six feet wide and completely open at the sides. No railing or screen provided decoration or protection. Three wooden steps led down to the scraggly yard. The porch roof shielded against only gentle showers and noonday sun and held no hope of protecting the small area from the approaching storm. Dabney rocked vigorously and glared at the darkening sky.

Storms made her angry.

The first large drops of rain cried out in insult and accusation as they splattered against the hot ground. Within minutes the drops merged into a waterfall that needed no river as its source. More lightning crackled. A car, its wipers vainly trying to clear the windshield, drove slowly down the street as water spilled out of the storm drains. While local gardeners gave thanks for the moisture, wet wind soaked the porch and the woman on it. Dabney rose to her feet.

It was time to confront the storm.

She moved to the top of the steps. A wave of rain ran across the ground and drenched her. She slowly maneuvered her overweight body down the steps to the ground. Her gray hair was plastered to her head, and the raindrops stung as they hit her skin. She walked to a spot about halfway between the house and the street and stopped. Tilting her head back with her eyes closed, she let the anger within build until it was stronger than the liquid bullets pounding against her. She raised her hands in the air and cried out in a voice that cracked from frequent use.

Another wave of rain rushed across the yard and doused her. Distant thunder at the edge of the storm mocked her. She kept her hands in the air, refusing to budge. She cried out again.

Dabney held firm, remaining in the front yard with her hands in the air. A police vehicle containing two officers slowed in front of the house. The driver, a seasoned detective, turned to his younger partner.

“Do you see that? It’s been a while since I came by here during a thunderstorm.”

The younger officer leaned across the seat and looked out the window.

“What is she doing? She’s got to be soaked to the bone.”

“Telling the storm to stop.”

The younger officer grunted, “Somebody should tell her the clouds aren’t listening.”

PUTTING MY HAND ON THE BRASS DOORKNOB, I GLANCED AT MY watch before opening the door. Zach and I wouldn’t get to Powell Station before dark unless we left Savannah within the hour. Mama and Daddy shouldn’t see the young lawyer’s light brown ponytail for the first time after sunset.

On the wall of the conference room hung a massive painting of the Savannah waterfront before the Civil War. At the end of the shiny table sat Joe Carpenter, the managing partner of Braddock, Appleby, and Carpenter. To his left was Myra Dean, a litigation paralegal. Across the table was a man I’d never met.

Paulding, a balding, stocky man in his early forties, wore an open-collared shirt with a steel beam embroidered on the front. His round head would be the perfect resting place for a hard hat.

“Any projects you have to finish before the end of the day?” Mr. Carpenter asked me.

“Good,” the tall, gray-haired lawyer continued. “As soon as Jason started going over his problem, I knew this was a case for you. You know something about fanatic religious groups, don’t you?”

“No, sir, except what I read in the paper. I’ve never been to the Middle East.”

Mr. Carpenter smiled slightly. “I don’t mean terrorists. I’m talking about the lunatic fringe of the church, fundamentalists who don’t know where religion stops and tolerance begins.” The lawyer turned toward Paulding. “Tami is one of the sharpest summer law clerks we’ve ever had at the firm. She goes to church every time the doors open, but her beliefs make her tougher, not softer. There’s no ‘turn the other cheek’ in her version of the Bible. A week ago she stared me down in a criminal matter when I challenged her judgment.”

His assessment of my conduct in
State v. Jones
made me wince.

“Mr. Carpenter, that’s not quite accurate—”

“Don’t argue with me, now,” the senior partner said, cutting me off. “Save your ammunition for Ramona Dabney, the dime-store preacher who claims Mr. Paulding is the reincarnation of Adolf Hitler.”

“It’s worse than that,” Paulding said, “and I want it stopped. I offered the church twice the appraised value for its property. All I got back was a bunch of harassing phone calls to people all over town.”

“Jason and his staff have done some of the homework for us,” Mr. Carpenter said, sliding a sheet of paper across the table. “This is a list of people contacted by Dabney.”

“She even organized a protest outside our corporate office.”

“Myra, copy this list for Tami, divide the names, and interview all of them. There may be more. Get affidavits or recorded statements from those willing to sign one, then provide a summary to me.”

“What are we asking them?” I asked.

“Everything you can think of,” Mr. Carpenter said. “Don’t let anyone try to tell you what they think is important; find out for yourself. Persistence is one of your strengths. Use it.”

Mr. Carpenter’s mind could race ahead so fast it was difficult to see more than a cloud of dust in the distance. If patient, I hoped a fuller explanation of my task would emerge when he came back into view. I pushed my long brown hair behind my ears.

“When do you want the summaries and affidavits?” Myra asked.

My stomach turned over. A twenty-three-year-old summer clerk wasn’t supposed to work overtime, but Mr. Carpenter had started treating me more and more like a junior associate.

“In the next few weeks.”

I sighed in relief.

“Why wait?” Paulding asked indignantly. “With what I’ve told you and prepared in advance, don’t you have enough to file suit?”

“Our representation is similar to your company building a shop-ping center. We follow a carefully laid-out plan to make sure we’re thorough.”

“I don’t want a fancy lawsuit that takes three years,” Paulding said, his voice rising. “Last week this woman wrote my wife a letter accusing me of all kinds of stuff. I know how lawyers drag things out. If you’re not going to do anything, I’ll find a cheaper lawyer who will. I want a court order putting a stop to this. And I want it now!”

“No you don’t,” Mr. Carpenter replied calmly. “It’s good for you and your business if Ms. Dabney continues.”

“What?” Paulding burst out, the veins in his neck bulging. “That’s crazy. Are you an idiot?”

Stretching my long fingers, I put my pen on the table, certain Paulding was about to be ushered out of the office. Mr. Carpenter had plenty of business; he didn’t need to put up with abuse from a prospective client.

“Who referred you to me?” Mr. Carpenter asked calmly.

Paulding rubbed the top of his head. “Frank Newsome.”

“Did he accuse me of wasting time by churning his file to make a big fee?”

“That you saved his company when he thought he was going to lose everything.”

“How is his business doing now?”

“Fine. He does a lot of subcontracting work for us. The Dabney woman went to see him with one of her crazy visions. He ordered her out of his office and told me to call you.”

Mr. Carpenter pointed at me. “Ms. Taylor can work on your file for a fraction of my hourly rate. Does that sound like I’m trying to take advantage of you?”

“No, but it doesn’t make sense that you want this preacher woman running her mouth all over town. If this keeps up, she’s going to hurt our business. She already has.”

“Good, good, that’s even better,” Mr. Carpenter replied, holding up his hand before Paulding could explode again. “Hear me out. How much profit did you expect to make from the development your company was going to build on the site that included the church?”

“I gave up on that deal. The church parcel was in the middle of the entire tract. Without it, the project wouldn’t work.”

“Was it a good opportunity?”

Paulding scratched his chin. “At least a million and a half after costs, maybe more. The anchor tenants were already lined up.”

“Would you still like the deal to go through?”

“Sure. We were counting on it so much that I passed on another great opportunity. The whole thing left us losing money for the quarter, probably for the year.”