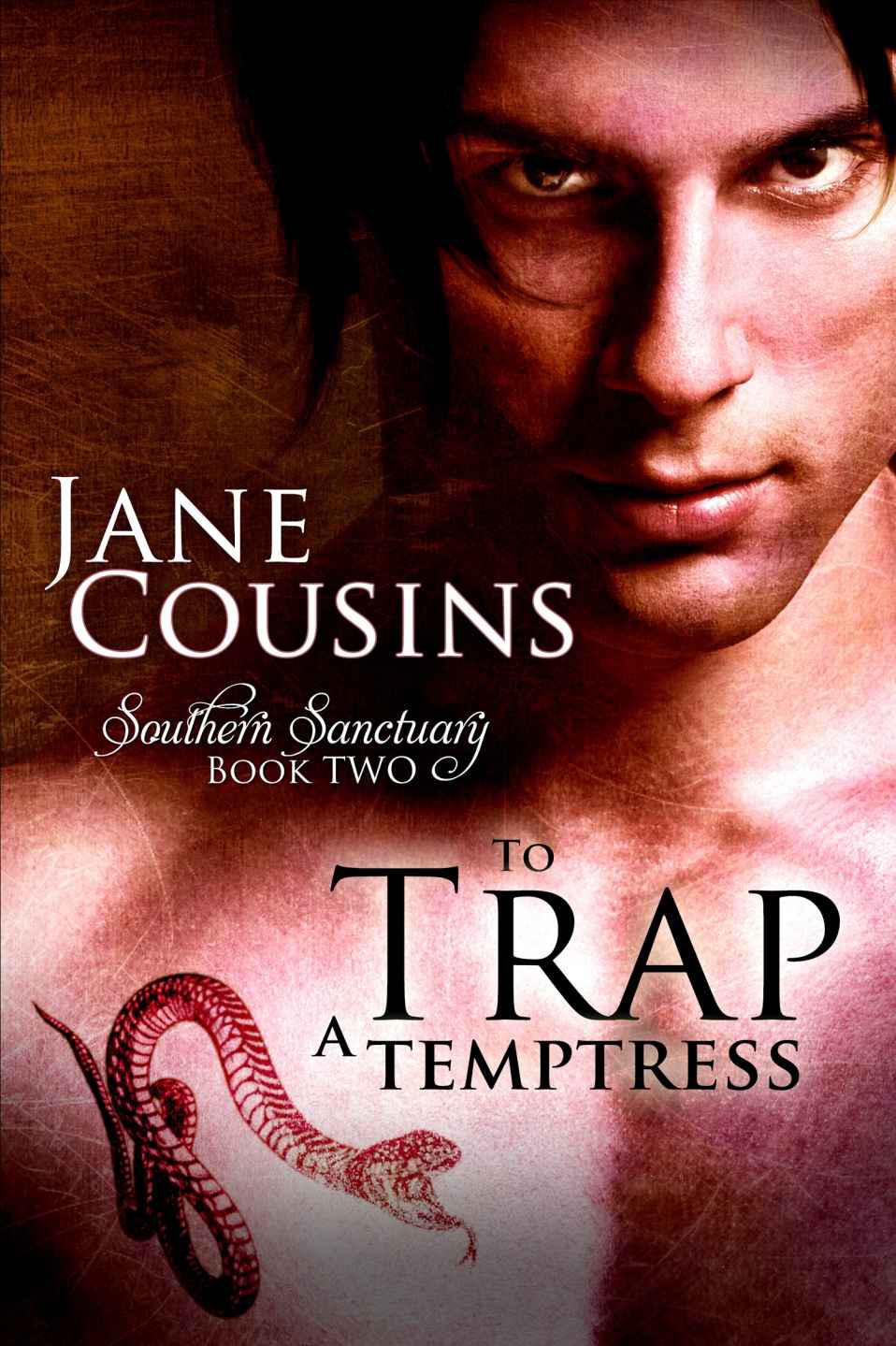 To Trap a
Temptress

Copyright©2013.
All rights reserved by the author.  Do not copy or re-distribute.

This
is a work of fiction.

For
Jodie.  Friend and Goddess.  Everyone should be so lucky as to have a
big sister like you.

“She
needs to be sassy and strong-willed.  A woman capable of standing her
ground when faced with a predatory dominant male used to getting his own
way.  She’ll need a backbone made of steel combined with an alluring
sensuality that would tempt the most hardened and cynical of men to fall for
her charms.

Maybe Gigi… or Darcy, now
there’s a firecracker.”  Great Aunt Alma clucked her tongue twice as she
reviewed her options out loud.

“What
you need is a Temptress.”

“So
not the sister then?”  Alma’s acquaintance queried.  “The Doctor?”

“Nell?”
Alma laughed as if her companion had made the funniest joke ever.
“Goddess no!”  Alma paused trying to catch her breath.  “Nell’s
lovely, don’t get me wrong but to match her up with one of the Warrior
Elite?  Oh no, she’s way too… nice.”

Ouch!
They say eavesdroppers never hear good things about themselves, well Nell
Montgomery could attest to that as she inched lower in her chair, high colour
blooming in her cheeks, her normally serene deep blue eyes darkening to indigo
with anger.  She’d passed wishing the ground would open up and swallow her
about five minutes ago and was now praying to the Goddess above for a lightning
bolt or at the very least a targeted air strike.

Talk
about a day for being on the receiving end of a series of back handed bitch
slaps.

The
first sour note in Nell’s day had sounded just after dawn when she’d been
jolted awake by the insistent ringing of her mobile phone.  It seems her
good friend Julie had accidently butt dialled her.  Still half asleep Nell
had listened as Julie and the rest of the ten year medical school reunion
committee, having arrived at the five star Fijian resort early to set up for
the four day event, tried to decide on the fake awards they would announce
during the final night dinner.  The group had sounded more than a little
tipsy as they threw around ideas - biggest flirt, most divorced, biggest God
complex, most boring.

There was more
laughter and then Devon Patel’s voice, dripping with derision, had cut through
the laughter.

“Well
we all know who would win the last category hands down.”

Julie
made an attempt at a half-hearted protest.  “Dev, don’t be mean.”

“I’m
just stating the facts.  Come on, if I say the words studious, focused,
obliging, predictable and downright sweet, you all know who I’m talking about
right?”

There
was a bout of too loud laughter and then as one the group cried out.
“Nell Montgomery!”

“See.”
Devon’s voice mocked Nell down the phone line.  “And we have our winner!”

Nell
had forced herself to hit the disconnect button and tried in vain to go back to
sleep, but that had proven an elusive quest as Devon’s disdainful voice and
mocking laughter whirled around in her head taunting her.  How had all her
good qualities become so tainted?  When had being nice, helpful and
obliging become a bad thing?

Thankfully
her futile attempt at getting back to sleep was interrupted yet again by the
ringing of her phone.

The second call of
the day providing her with the best distraction ever, a genuine medical magical
mystery.  Getting dressed and ready in record time she’d headed straight
to her cousin Riya’s place to make an emergency house call, and what a doozy
that had turned out to be.

The rest of
the morning had been just as frantic as she raced around the countryside in an
attempt to meet the needs and demands of her large extended family and their
medical and sometimes mystical ailments.

She
was too obliging, too nice.  Thanks to her inability to just say no she’d
only just made it to the afternoon party in time to witness the formal melding
of her cousin Hadleigh to her gorgeous warrior partner Vaughn.  Not only
had she almost missed the vows and blood sharing officiated by the Head of
their magically enhanced clan Great Uncle Edward but she was stuck in her work
clothes.  Depicting the proverbial buttoned up nun whilst all her female
relatives in comparison looked pretty and relaxed in their flimsy summer party
dresses, happily mixing and mingling with the sudden influx of male guests
today as Hadleigh’s Valhalla relatives descended on them for the party.

Nell
should have been out there with them but instead she found herself cowering
behind a flower arrangement, trapped by the presence of her Great Aunt Alma standing
not two feet away.

According to… well
mainly her big brother Edward, Leader of the Sanctuary, Alma was a lovely
woman.

And Nell was sure if she’d ever
taken the opportunity to spend time in Alma’s presence she might well feel the
same.

Except that was never going to
happen because Great Aunt Alma was the family match maker, returned to the
family fold after a long absence, renown for wielding her skills with all the
finesse of a Sherman tank. In fact that was the ‘not so secret’ nickname a lot
of the older generation had assigned to her.

If Alma were to be compared to a force of nature Nell was pretty sure it
would be a Cyclone.

Goddess
darn it, if her skirt hadn’t been so tight she could have crawled out from her
hiding place and made good her escape. Or perhaps if she were less impolite by
nature she’d climb over Great Uncle Alfric sprawled out in the seat next to her
own fast asleep and make a swift retreat.

But no, she was stuck and Alma, oblivious to her presence thanks to her
shield of greenery was hatching an elaborate match making plot out loud.

Darn
why had she chosen to sit down for a short rest?

If only she’d joined her friends to flirt and
dance with a few of Hadleigh’s cousins she wouldn’t be stuck listening to Great
Aunt Alma plot the downfall of her next targeted dupes.

Though who was she kidding, she was hardly
the poster girl party animal type or for that matter much of a flirt.  Not
that there was anything tragically wrong with her.  It was ridiculous
really, she was a competent medical doctor for Goddess sake, slim of build, not
short but not too tall at five ten, her hair was neither blonde nor brown but
somewhere in between, her skin was clear, her eyes were blue.

Goddess darn it she might not be heart stoppingly
memorable but she was pretty, and besides a love of shockingly expensive sky
high shoes she had no other vices.  She didn’t drink to excess or smoke,
curse or sleep around, so why weren’t men banging down her door?

Of
course Great Aunt Alma had hit it on the head; being deemed too nice was the
kiss of death on the dating scene. She was the equivalent of vanilla ice-cream,
predictable and boring.  She hunched her shoulders, praying the afternoon
breeze wouldn’t dislodge the decorative pot of roses and ferns she was being
forced to hide behind.

“She
sounds like quite a challenge for your matchmaking skills - the Doctor girl.”

Goddess,
they were still talking about her, as she listened to Alma issue a soft
derisive snort.

“Challenge?
Hardly, I already have a bead on a lovely young man, an accountant, not tall
mind you and a bit timid.  There’s a few things I need to work on.

He still lives at home with his mother and
I’m told he suffers from a slight nervous stutter but the grapevine assures me
that he’s just the nicest man.  No doubt a perfect match for Nell.
Besides there’s no hurry, it’s hardly like any man will come along and sweep
Nell - of all my girls - off her feet.”  Alma issued another soft laugh,
one that grated across Nell’s last nerve. “Oh look Hadleigh and Vaughn are
heading onto the floor for their first dance, come on I want to test out my new
camera.”

Head
down Nell felt the first stirrings of real anger, a luxury she didn’t allow
herself very often in her profession.  She needed an image makeover
stat.  She needed to break out of her bland world and make a splash so big
that it would forever shatter her nice girl image.

What
she needed was a man. And not just any man, a completely shocking, ridiculously
inappropriate, insanely unsuitable, ludicrously improper man.  She swore
to the Goddess above when she found him she would seduce the heck out of him
and bury her goody two shoes image once and for all.

A
timid man indeed!  Tapping her peep toe wine red Ferragamo clad right foot
she surveyed the available men trying to gauge their bad boy quotient and over
all shock value.   Mentally she discarded all of the visiting
Valhalla boys, too well known for their womanising ways.  It was one thing
to seduce a man and give her ego a boost.  It was another to be just
another notch on some Romeo’s bed post.   Then there were all the
boys she’d grown up with, yuk, major ick factor, no matter how far removed some
of the cousins were on the family tree.

So,
just who did that leave her with exactly?  Great Aunt Alma’s short timid
accountant with a stutter?  No there had to be someone, whoa, hold on a
moment.  Goddess dare she?  The only viable pool of men left
available to her was Vaughn’s fellow elite warriors.  As she stared across
the dance floor at the six sun-kissed huge buffed and gorgeous candidates she
began to question her sanity.  Currently all appeared to be relaxed and
enjoying the party but she knew that could all change in an instant if a threat
loomed.  Common sense snuffed out her anger.

What
was she thinking?  That she - nice girl Nell Montgomery- had enough
daring… enough sex appeal to seduce one of Maat’s noble elite?

Okay
new plan.  Duck out of the party early, race home and finish packing for
the reunion… or better yet forget the reunion, climb into bed and spend the
next four days with her head under the covers.  There was certainly a lot
less chance of her making a fool of herself that way.

Hmm,
lurching to her feet she was dithering over her limited escape options when
three things happened simultaneously.  One her mobile rang, glancing at
the caller id her stomach tightened.  Even though she was officially off
duty and there were three doctors on call she was being paged.  Because of
course the all too sweet and obliging Doctor Montgomery never said no.
Two, out the corner of her eye she happened to note Great Uncle Barty heading
straight for her.

As one of her more
high maintenance hypochondriacs he no doubt intended to corner her for the rest
of the party and squeeze out every last free drop of medical advice he
could.  Which just left the final nail in the coffin, blocking her only
means of escape were Great Aunt Alma and her companion… Maat.  Goddess
above her aunt had been gossiping about her shortcomings with an actual Goddess?
Would the humiliation that was known as this day never end?

At
that precise moment both women happened to look up, matching smiles that could
only be described as pitying were sent her way.  Suddenly seething once
more Nell jabbed down hard on the phone’s ignore button before swinging around
sharply to stalk across the packed dance floor in search of a completely an
utterly inappropriate man to seduce.