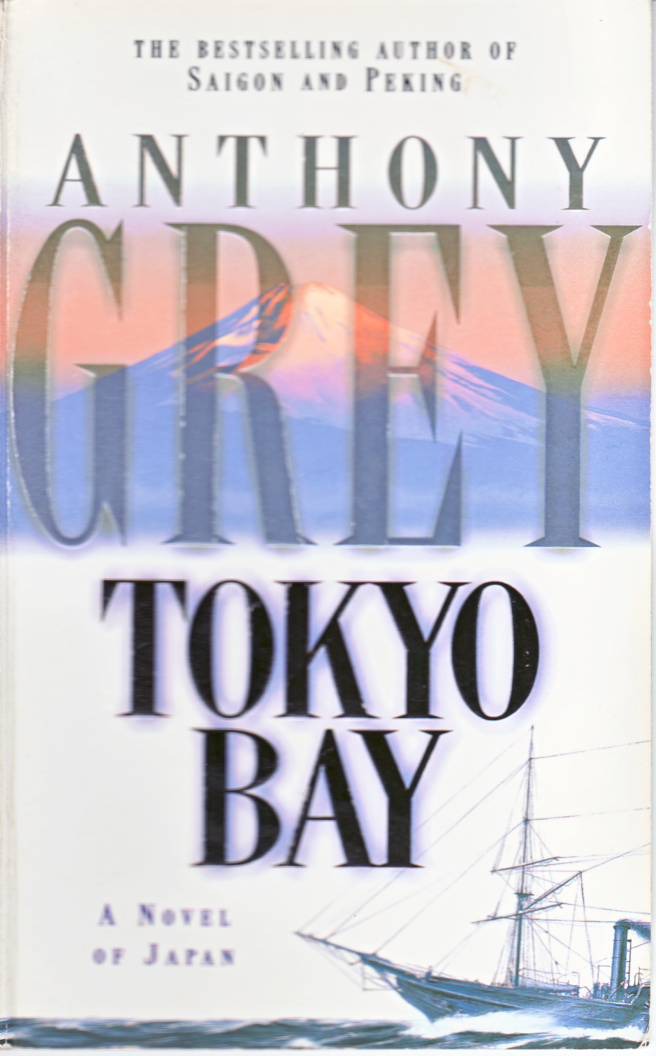 Pearl Harbor, Nagasaki, Hiroshima
...
the greatest East-West conflagrations in history. But where did the terrible mistrust which sparked these cataclysms spring from?

Vital clues emerge from the dramatic events of July 1853 when steam- driven US Navy warships loomed shockingly out of the haze cloaking Tokyo Bay.
Rumours
that foreign monsters had arrived on smoking volcanoes engulfed the civilian population in hysteria
-
and hordes of feudal warriors rushed to defend the coastline of the world’s most
isolated realm,

With these two nations teetering on the brink of war, Robert Eden, an idealistic young New England officer, swims secretly ashore on his own unauthorised peace mission, inspired by the haunting moonlit beacon of Mount Fuji.
On land he clashes with fearsome sword-wielding samurai led by the formidable Prince Tanaka Yoshio
-
and encounters Tokiwa, a beautiful and courageous geisha fleeing amidst the general panic. The intense emotional entanglements that follow will ensnare Eden and
his descendants in Japan’s destiny for generations to come.
With this enthralling first novel of a new Asian trilogy, the author of worldwide bestsellers SAIGON and PEKING illuminates as never before a little-known historical episode which helped shape the modern world.

With his novels
Sai
g
on, Peking
and
The Bangkok Secret,
Anthony Grey memorably chronicled the crucial impact of the West on Vietnam, China and Thailand.
Tokyo
Bay
is the first volume of a new fictional trilogy that will broaden the focus across East Asia and illuminate 150 years of tortured rivalry between Japan and the West
-
a rivalry of great significance for the w
o
rld that still remains to be resolved.
Anthony Grey’s books and short stories have been translated into some fifteen languages worldwide. His enduring epics
Saigon
and
Peking
are critically ac1aimed best
-
sellers in Europe, the Far East, South Africa, Australasia and the Americas. A former foreign correspondent with Reuters in Eastern Europe and China, he has written eight novels to date. His first book was an autobiographical account of the two years that he was held hostage by Red Guards during China’s Cultural Revolutio
n
. He makes documentary films for British television, broadcasts internationally on the BBC World Service, and lives at present in London.

Non-Fiction
THE PRIME MINISTER WAS A SPY

A novel of Japan

F
irst published 1996 by Macmillan
This corrected edition published 1997 by Pan Books
an imprint of Macmillan Publishers Ltd
25 Eccleston Place, London SWIW 9NF
and Basings
t
oke
Associated companies throughout the world
ISBN
O
330 34918 X
Copyright © La Fun Ltd 1996
The right of Anthony Grey to be identified as the
author of this work has been asserted by him in accordance
with the Copyright, Designs and Patents Act 1988.
All rights reserved. No part of this publication may be
reproduced, stored in or i
n
troduced into a retrieval system, or
transmitted, in any form, or by any means (
electronic
m
echanical,
photocopying, recording or otherwise) without the prior written
permission of
t
he publisher. Any person who does any unauthorized
act in relation to this publication may be liable to criminal
prosecution and civil claims for damages.
3579864
A UP catalogue record for this book is available from
the British Library
Phot
o
typeset by Intype London Ltd
Printed by McPherson’s Printing Group
This book is sold subject to the condition that it shall not, by way of trade or otherwise, be lent, re-sold, hired nut,
or otherwise circulated without the publisher’s prior consent in any form of binding or cover other than that in which it is published and without a similar condition including this condition being imposed on the subsequent purchaser.

De
dicated to the cherished memory
of dearest Shirley, who contributed as generously to this book as she did to all others before it; and to Clarissa and Lucy for their youthful courage, resilience and love during a time of trial; and to my dear late mother, Agnes, for her fighting spirit.

Dedicated also to Angela
-
with much loving gratitude.

In future as long as the sun shines on the earth, let no one sail towards Japan, not even an ambassador. This declaration will never be revoked and will be maintained on pain of death.
Japanese edict issued after execution of foreign missionaries, 1640.

PART I
The Black Ships Arrive
19

WHITE LATHER FLEW
from the heaving flanks of a dying courier horse as its helmeted samurai rider spurred the exhausted animal fiercely across the arched bridge spanning the last of three concentric moats in front of the Shogun’s massive castle at Yedo.
‘Chokurei da!’
yelled the rider to
armoured
pike- men who stood guard beside the inner bastion’s tall iron-and-wood gates.
‘Kinkyu chokurei da!’
He drew a small scroll, bound with golden thread, from the sleeve of his dark blue fighting kimono and flourished it pointedly above his head.
The scowling sentinels, who wore broad helmets and ribbed body armour of leather and bamboo, had begun to lift their pikes menacingly in his direction. But the commanding shout of the obviously young samurai stopped them in their tracks. His words constituted a secret password indicating that he carried a rare ‘urgent message’ from the Emperor, who lived in seclusion in Kyoto, three hundred miles to the south-west. Also, close up, they
could
see the heraldic six-pointed star of his clan emblazoned on his sleeveless
jimbaori
battle
-
coat in gold filigree, denoting that he was a nobleman of the very highest rank.
‘Hayaku!’
yelled the rider impatiently, wheeling the unsteady horse as the startled sentinels swung open the ponderous gates.
‘
H
ayaku!
-
Be quick!’
As soon as the gap between the gates was wide enough, he sent the horse surging into the castle’s inner courtyard. He rode hard through a succession of further guard-points, ye
ll
ing and brandishing the scroll each time, until he reached the
flight
of stone steps that led up to the main entrance of the stronghold. The moment he flung himself out of the saddle, the horse collapsed, blood reddening the foam at its mouth. It shuddered and squealed pitifully before expiring. But the young samurai nobleman did not stop or glance back as he bounded up the steps, his twin swords jutting from the sash belt of his kimono. On showing the scroll and its imperial seal to a chief sentry officer, he was granted immediate entry.
Running and walking by turns, he raced along successive high-vaulted passageways, where the walls shimmered with gold leaf. Ascending staircases three steps at a time, he passed beneath painted wall panels depicting mythical birds in groves of bamboo and mountain pines. Overhead, wooden beams lacquered in black and gilt supported ornately decorated ceilings, but the young samurai scarcely spared them a glance. Pausing only to ask directions from spear
bearing sentries dressed in formal uniforms of bright brocade, he rushed on.