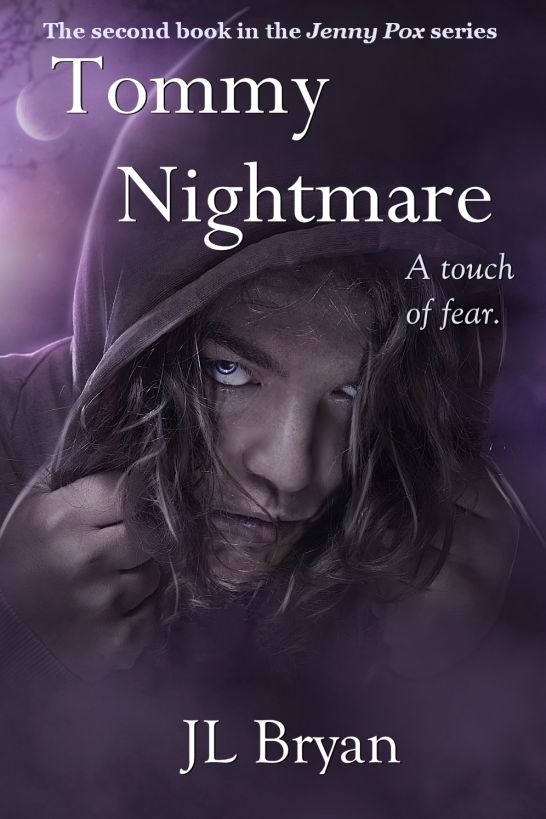 Smashwords License Statement:
This
ebook is licensed for your personal enjoyment only. This ebook may
not be re-sold or given away to other people. If you would like to
share this book with another person, please purchase an additional
copy for each recipient. If you’re reading this book and did not
purchase it, or it was not purchased for your use only, then please
return to Smashwords.com and purchase your own copy. Thank you for
respecting the hard work of the authors.

The following is a work of fiction. Any
resemblance to actual persons or events is coincidental.

Tommy heard the clatter in the hall, then a
loud thump, followed by the old man muttering. The old man
typically blabbered long streams of incoherent mush, which
occasionally contained a fully-formed word or two along the
way.

Tommy tried to ignore the gibbering voice
outside the door. Nobody else stirred at the sound. The other
foster boys—Luke, and Jeb, and Isaiah—continued sleeping in the
double bed they shared next to his.

Tommy had a bed to himself, though the boys
were supposed to share them two apiece. None of the other boys
would sleep with Tommy because it gave them nightmares. For the
first couple of months Tommy had been here at the Tanners’ house,
the two older boys—Luke, who was fifteen, and Jeb, who was
thirteen—forced eight-year-old Isaiah to sleep with Tommy.

Nearly every night, Isiah’s screaming and
crying woke them all. In fact, Isaiah screamed his head off any
time Tommy touched him. Tommy sometimes had that effect on people,
especially if they were already scaredy-cats.

Eventually, Luke and Jeb showed mercy and let
Isaiah sleep with them, probably just so they could have peace at
night. Tommy had slept alone for a couple of years now.

Luke called him “Tommy Nightmare.” The
younger boys had taken up the nickname, too.

In the hall, the old man’s muttering grew
louder, accompanied by the sound of fingernails scratching the
wall. The old man was just lingering there, on the other side of
the wall from Tommy, making his pathetic blabbering and whimpering
noises.

The old man was Mr. Tanner’s father, and he
lived in a room down the hall, next to the master bedroom where Mr.
and Mrs. Tanner slept. The Tanners had no children of their own—as
they put it, “The Lord had a different plan.” They only had the
four foster boys currently entrusted to them by the State of
Oklahoma.

Outside the door, the old man’s scratching
and gibbering grew more insistent. Tommy sighed and slipped out of
bed. The night was freezing cold, and the Tanners only gave him
worn old pajama pants to sleep in, because they said suffering was
good for a child’s soul. The hardwood floor was so cold it burned
his bare feet.

He tiptoed around the other bed, where the
three other boys looked very warm, and he felt a pang of
jealousy.

He eased open the door, wincing at the creak.
He didn’t want the other boys to wake up and start yelling at him.
And he really, really didn’t want to wake up Mr. Tanner.

Tommy peeked out into the hall.

Mr. Tanner’s father—whom Mr. Tanner insisted
the foster boys call “Pap-pap”—lay sprawled on the warped old
boards, one arm draped across his overturned walker. His shaking,
liver-spotted hand grasped and released the walker frame, over and
over again. Tommy thought of a fish freshly pulled from the creek,
how its mouth kept opening and closing as it died.

The old man faced the floor, blabbering
nonsense and drooling. His other hand scratched uselessly at the
wall. His bathrobe had hiked up, revealing his withered old legs,
the color of dead snakeskin. His ankles kicked in the air as if he
were pedaling a bicycle.

Tommy looked up and down the hall. He didn’t
know what to do. If he woke up Luke, Luke might get mad and punch
him in the nuts. He ought to wake up Mr. Tanner, but that idea
terrified him. He’d rather get punched in the nuts than walk into
Mr. Tanner’s room.

“Gaaaah,” Pap-pap said. He turned his head
and looked at Tommy with one rheumy eye. He stopped scratching the
wall, and instead starting grabbing the air. “Guuuh…Guuuuh…”

He took the old man’s hand.

“Shhh!” Tommy turned the old man over and
slid a hand under his side. Tommy could feel his ribs through the
threadbare blue robe, and the man was shaking hard. “I just got to
prop you against the wall,” Tommy said. “Then we can get your
walker. You hear me?”

“Gaaaah..” The old man made a choking sound.
He quaked and stared at Tommy.

“Okay, here we go.” Tommy heaved and
strained. The old man was frail, but Tommy wasn’t really very
strong himself. He wrapped both his arms around the old man’s
torso. Tommy tried to imagine he was a superhero, like Batman,
sneaking around in the night and helping people. But mostly he felt
scared. Pap-pap frightened him. Especially when you knew Pap-pap
was the father of Mr. Tanner, who was truly scary.

Tommy pulled the old man up. Fault lines of
pain ripped open along Tommy’s back and across his shoulders, but
he didn’t give up. He leaned the old man against the wall, but
Pap-pap began sliding back toward the floor.

“Nuuuuuh…Nuuuuuuh!” Pap-pap’s lips quivered
and he swung his head from side to side.

“You got to be quiet!” Tommy said. He looked
at the overturned walker on the floor. If he let go of Pap-pap, the
old man would fall down again. He should have stood the walker up
first. Stupid.

Tommy reached out one foot toward the walker,
while pressing Pap-pap against the wall with one hand. Tommy could
feel the old man’s heart whamming under the loose, dry skin of his
chest.

Tommy hooked his toes under the lowest rung
of the walker. He pulled it toward him, and it clattered against
the uneven floorboards.

“Nuuuuh!” Pap-pap stared at him with bright
eyes, thick drool hanging from his chin.

“Hey!” Tommy turned his face away. He could
feel Pap-pap’s heart jutting against his fingertips with every
beat.

“Pap-pap?” Tommy looked back at the old man.
Pap-pap sagged against the wall now, not moving at all. His eyes
stared somewhere past Tommy’s shoulder, and his mouth dropped all
the way open. The old man peed, making a fresh wet stain on his
underwear.

Tommy was pretty sure he was dead.

At the end of the hall, the door to the
master bedroom banged open. Mr. Tanner stormed out, all six foot
five of him, wearing only his sweatpants. He carried his belt with
him, the one with the giant brass buckle shaped like Oklahoma. Mr.
Tanner was in his early fifties, and the copious hair on his head
and chest was gray, but he was still as big and strong as one of
the bulls over on Mr. Whitson’s ranch.

“What are you kids doing out here?” Mr.
Tanner yelled. He snapped the belt taut, a horrifying sound. But
his angry expression turned to surprise when he saw Tommy pinning
the old man against the wall, with the overturned walker right next
to Tommy’s feet. “Pap-pap?”

Tommy gaped at Mr. Tanner, too terrified of
the man to say anything.

Pap-pap slid down the wall, and Mr. Tanner
caught him. He looked into the old man’s eyes, but the old man
wasn’t looking back. His eyes were as cold and glassy as
marbles.

“Oh, Pap-pap,” Mr. Tanner whispered. He eased
his elderly father down to a sitting position on the floor, against
the wall. “Oh, Pap-pap.” Mr. Tanner looked like he would cry, and
Tommy felt like crying, too.

“What on Earth is all this commotion?” Mrs.
Tanner stepped out of the bedroom, her blond hair tangled around
her narrow, sour face. She wore her frilly pink night dress that
barely covered her hips. She was at least twenty years younger than
Mr. Tanner, and much shorter. She gasped when she saw Pap-pap and
the walker on the floor.

“He’s dead!” Mr. Tanner wailed. He stood up
and pointed at Tommy, who cowered against one wall. “Because of
him.”

“Didn’t what?” Mr. Tanner advanced on him and
snapped the belt again. “Didn’t what, boy?”

“Looks to me like you attacked him. Why’d you
do that?” Mr. Tanner loomed over Tommy. “You tell me.”

“Why’s your face all scratched up?”

Mr. Tanner cracked the belt against Tommy’s
stomach. Tommy slid down the wall and covered his stomach with his
arms, so Mr. Tanner began whipping his shoulders instead.

“Oh, goodness,” Mrs. Tanner whispered. That
was all she did when her husband beat the foster kids. She stood
there and whispered, “Oh, goodness.”

Tommy curled up on the floor, and Mr. Tanner
whipped his back and legs.

“I told you this one had the Devil in him!”
Mr. Tanner shouted. “I told you!”

Luke and Isaiah, the oldest and the youngest,
appeared at the door to the boys’ room. Isaiah opened his mouth
like he was going to speak, but Luke covered Isaiah’s mouth with
his hand.

“He done brought the Devil into this house!”
Mr. Tanner yelled. He was still whipping Tommy, but he was losing
steam. After a few more smacks, he turned his attention back to his
dead father. He knelt by the old man’s corpse.

“You think we ought to call the ambulance?”
Mrs. Tanner asked, in her quiet voice.

“We ought to call somebody.”

“Then you go and call somebody!” Mr. Tanner
roared. “When did I tell you to get out of the bed, anyhow?”

“I’m sorry!” Mrs. Tanner turned and scurried
away to the bedroom.

“Get in the bed!” Mr. Tanner called after
her, and then he turned to stare at Tommy. Tommy cringed against
the wall, hurting all over, his arms hugging his knees.

“This is the Devil’s work,” Mr. Tanner
whispered. “And the Lord demands a special retribution for those
who help the Devil do his work.”

Tommy shivered and looked at the floor.

Mr. Tanner turned back toward his bedroom,
and Luke and Isaiah ducked out of sight. Mr. Tanner slammed his
bedroom door and began shouting at his wife.

Tommy stayed where he was, like he’d been
told, staring at Pap-pap’s dead body sitting against the wall. An
expression of horror was carved into Pap-pap’s face, his eyes
stretched wide and his toothless mouth gaping open, as if the old
man had died in the grip of an unspeakable nightmare.

The ambulance came in the night. Tommy
cowered in his room while the other three boys went out to watch
the circus of emergency medical workers and police. He lay in bed,
shivering, as red and blue lights pulsed in the window.

They would come for him, Tommy was sure of
it. Mr. Tanner would tell the police it was all Tommy’s fault, and
then Tommy would go to jail for life. The end.

But it didn’t happen. The police and
emergency people eventually went away, and Mrs. Tanner brought the
other boys back to the room. Tommy lay in his bed, eyes closed and
head turned aside, and pretended to sleep.

“Does Tommy really have the Devil in him?”
Isaiah asked.

Descended (The Red Blindfold Book 3) by Rose Devereux
Hiking for Danger by Capri Montgomery
Unexpected by Faith Sullivan
House That Berry Built by Dornford Yates
Thread End: An Embroidery Mystery by Amanda Lee
Shakespeare on Toast: Getting a Taste for the Bard by Ben Crystal
Down for the Count: A Toby Peters Mystery (Book Ten) by Stuart M. Kaminsky
Naughty Girl by Metal, Scarlett
El monstruo de Florencia by Mario Spezi Douglas Preston
A Most Wanted Man by John Le Carre