Read Tomorrow There Will Be Apricots Online

Tomorrow There Will Be Apricots 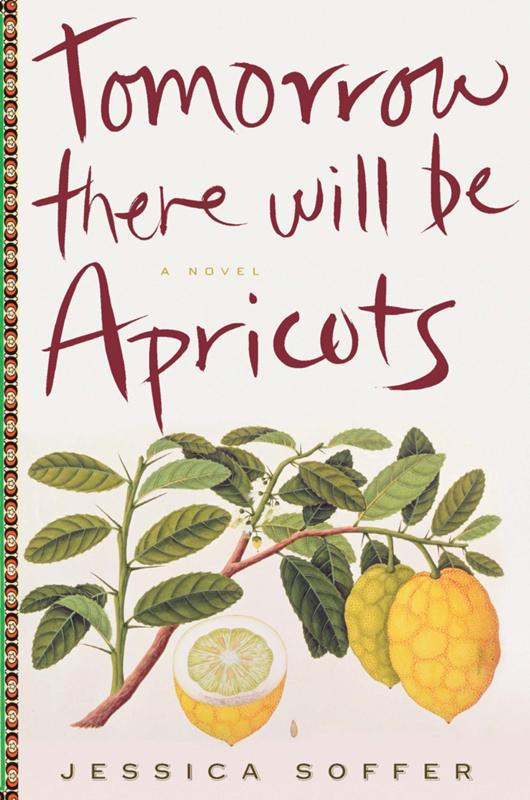 Tomorrow there will be apricots : a novel / Jessica Soffer.

For my father, who taught me to sit still and imagine.

For my mother, who taught me to stop sitting around and to put my imagination to words. This book is because of you.

And for Alex, my heart.

I
WAS PRETENDING
to read the paper. I thought that if I didn’t say anything, my mother might stop glaring at me, burning a hole in my face.

I was home from school. I’d been sent home.

And though I hadn’t gotten myself caught on purpose, as soon as Principal Hidalgo said “suspended,” my first thought was of my mother waking to the smell of homemade croissants. I’d be in an apron, piling the hot pastries high in a breadbasket, just beside the cranberry-sage brown butter I’d whipped up. I was suddenly happy, hopeful, thinking of the time we could spend together.

Then I came home. The fact that she refused to look me in the eye made me feel more like a nuisance than a disappointment.

“Kanetha told your teacher that you looked drugged,” said my mother, biting a nail, then examining it, the picture of calm on the couch, as if we were talking about leftovers. She had a green towel slumped on her head, and her long shiny legs were spotted with freckles I’d never have. I’d never have her perfect eyebrows either. They were like the feathery fins of her famous pan-roasted sea bass.

I went quiet. She did too. I had to remind myself not to say a word. I talked too much when I was upset. I had a habit of asking her if she loved me. She had a habit of not answering.

“Kanetha’s a sneak,” I said. “She writes equations on tissues and pretends to blow her nose during tests.”

More words bristled against my tongue. My mother’s silence baited me. I wanted to tell her that Kanetha didn’t always wear underwear and that she flashed the boys during American History II. Kanetha Jackson, eighth-grade busybody. She said I’d been standing in the stall and not “making.” So she’d kicked open the door with her neon sneaker. I hadn’t even known she was in the bathroom. The stupid thing didn’t lock. She found me with my skirt up, my tights down, my shoeless foot on the toilet seat, the paring knife to my thigh. Her lips were stained with fruit punch.

I wanted to ask my mother if she knew the paring knife was hers. The Tojiro DP petty knife, her second favorite. I’d taken it off the counter that morning.

I held my breath and looked down at the obituaries. “Mort Kramish, Celebrated Hematologist and Master Pickler, Dies at 79.” Still, silence. I could feel it without looking: my mother’s low, growly simmer. I gave in.

“I’m fine,” I said, wanting and not wanting her to believe it. “I won’t do it again.” I wanted her to ask me to promise. I waited for it. She swatted the newspaper out of my hands. It cracked as it closed against my knee. She stood up. Her hands were heads of garlic, tight to her sides.

“I could have left you in New Hampshire, you know. You could have grown up with nothing, no one.”

She meant that she could have left me with my father. Sometimes, she called him pudding. “He’s as useful as box pudding,” she would say.

“I’m a good mother,” she said so quietly it was like stirring the air.

I was sorry and I wasn’t. I had the urge to hug her and I didn’t. I told myself to be less selfish. She was so busy. She had a “staff of thirty-five and an untarnished culinary reputation to uphold.”

The towel sat like a turtle on her head, its feet pushing and bending her ear. She had perfect ankles. Her eyes were the color of ripe pine trees. She made no sound when she cried. Like women in the movies. I was a blubberer. Full of watery snot. Aunt Lou said that when I cried it looked like I was about to throw up.

I put my hand on my thigh, willing her to forget. The scabs were pomegranate seeds, tiny and engorged.

My mother said I was sensitive even as a baby. After every fight, after she’d screamed, thrown a jar of niçoise olives against the wall, or poured—she actually did this once—a full bottle of thyme oil over my father’s head, she’d go to my crib. I’d be on my back. Everything right except for my tiny fingers and toes. They were curled into themselves as tight as fiddleheads. She had to uncoil them, one by one. My nails left mini purple crannies in the fleshy parts of my palms. She didn’t know where that strength came from in such a little thing.

“I hoped you’d grow out of it,” she said and I wished myself to be small again.

I could have been more careful. I should have picked a stall that locked.

Now she went to the freezer and for a second I was bolstered. I thought,
She’s about to forgive me. She’s about to take out puff pastry. We’re about to make cinnamon palmiers.
Instead, she grabbed a bottle of vodka and put it into her robe pocket. Whenever it seemed like she was going to scream, she didn’t.

“You have no idea,” she said. “This is so much more than I bargained for.”

Nausea pulsed in my throat. I’d never meant to be more than she could handle. I did her laundry. I folded her socks into peacocks or hares. Civet of hare. Hare
à la royale
.

“I’m sending you to boarding school,” she said. “Principal Hidalgo has a contact. There’s a spot reserved for second semester, which gives you all of December to get your ducks in a row.”

I wanted to sit down but realized I was already sitting. I couldn’t breathe.

She grabbed the portable phone from the kitchen counter and dialed like this was all the phone’s fault. She was calling Aunt Lou. She didn’t say a word until she was in the other room. I wanted to tell her I was sorry. I would change. I bit down on my bottom lip until it almost popped. I shuddered. I noticed a spot on the couch that was darkened from where my mother must have been resting her head. I put my face into it. The dusty sweetness of her shampoo.

Just then, as if she’d heard me, my mother shouted from the other room, “And don’t even think of hurting yourself while I’m in here.”

The first time, I was six. I was making a cake for my mother’s birthday and slipped on some grease when I was putting it in the oven. I seared both hands on the middle rack. For a second, the pain surprised me, took me, lifted me as if by a wave. I trapped the scream in my throat but tears busted out of my face. I was all shock until I heard my mother’s footsteps and realized that I’d put out my hands to do it again, touch the heat again, be lifted again, when the rack collapsed. The undone cake splattered like vomit. There were fresh raspberries in the batter. She came in.

“Jesus, Lorca,” she said, looking at the mess.

She acted like I’d gotten peanut butter on her blouse, just “Oh honey, get an ice pack.” She had the obits in one hand, a peeled carrot in the other. I wanted to ask her if she loved me. She yelled for my father. He’d been outside chopping wood. His front was covered in splinters and chips. He made me put my hands on the counter, show him the damage.

“Hush, baby. Hush-hush,” he said. I didn’t need his sympathy but he needed to give it. His eyes were watery, just looking. “Oh, ouch, baby.”

My mother was gone.

He meant well, but I couldn’t have cared less. In a moment, I was running up the stairs, pretending I had to pee, trying to remember how I’d done it. I was aching to burn my skin again. And again.

After that there were light bulbs, tire spokes, vacuums. There were car doors, glue guns, and broken bottles winking to me from the side of the road. There was the grill in summer that could stay piping hot well after dinner, well after everyone had fallen asleep.

Back then, I couldn’t say what it was about. I couldn’t wrap my head around the need, the craving. Now I imagine that if my mother had just taken out the ice pack, tucked it into a towel, and held me on her lap, rocking me, whispering in my hair, cooling my fingers, things would have been different. The pain would have subsided normally, been reabsorbed normally. It wouldn’t have remained forever, hovering over me, terrorizing me like an angry wasp, cruising for the exact right second to strike.

My parents fought like crazy. For the eight years of my life that they lived together in New Hampshire, I remembered their voices going scratchy and dull as the sun rose. The fights weren’t about me. They were about them, each complaining about the other. My mother called my father pappy, not like “father,” but like “old fruit.” My father asked my mother please not to be so cruel. He begged her. I would listen carefully, waiting for them to mention me, to say my name. But they never did.

“How can you stand such a minuscule life?” she’d say.

“It’s not minuscule,” he’d answer, trying to whisper. “This is the country. You wanted to live here.”

In second-grade science, we watched water boil on hot plates. When the steam shot out from the beaker, I leaned forward onto the table. I let the heat lick my neck. It was so strong it made me gag. I nearly fell off my stool, reeling. The long corridor to the principal’s office was quiet but for my footsteps on the nubby gray carpet and the wild sound of my pulse against the burn. I put my fingers to it. Blisters formed like uncooked egg yolks. Soon it would be recess. I walked faster.

My mother came and got me. She didn’t say a word. I couldn’t shut up.

I told her someone pushed me from behind.

Then I told her that I slipped and fell onto it.

Then I told her that I was reaching for something.

Then I told her my teacher told me to do it.

She was walking five steps ahead of me in the parking lot. Her bag was swinging against her legs. I was scrambling to keep up.

I told her it was an accident and she stopped, turned around, and looked at me. She said, “Ha,” sarcastic, but also like she was expelling a popcorn kernel from her throat, and then she didn’t say another thing.

If I had a dime for every time I told her that—it was an accident—I could buy all the cheese at Saxelby’s. If anything could have made my mother happy, it would have been that. She liked the smelly kind the best, the kind that made your mouth pucker and buzz.