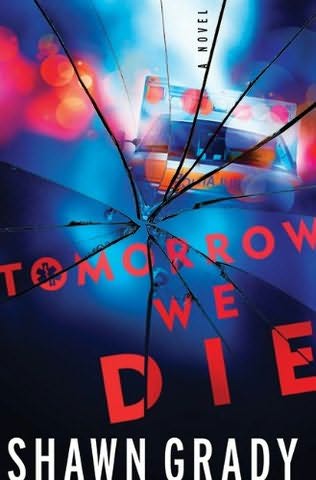 This book is a work of fiction. Names, characters, businesses, organizations, places, events, and incidents either are the product of the author’s imagination or are used fictitiously. Any resemblance to actual persons – living or dead – events, or locales is entirely coincidental.

Scripture quotations are from the New King James Version of the Bible. Copyright © 1979, 1980, 1982 by Thomas Nelson, Inc. Used by permission. All rights reserved.

I spent the day chasing the Angel of Death.

Being a paramedic can be a hard life, living in an ambulance for twelve hours a day, parked on street corners, inhaling reheated 7-Eleven burritos and Red Bull. There are shifts that wear on you, when no matter what you do, even if you run calls as smoothly as possible and do everything just right, that despite all the king’s horses and all the king’s men . . .

Death walks in without remorse.

I’ve seen people’s spirits leave them before my eyes. And there is always something different in the room right then, something transcendental, as if unseen ushers are escorting a soul from this world. The entire week had been like that for my partner and me – always one step behind the Reaper.

So you can imagine my surprise when we actually caught him.

The harder my partner pushed on the gas pedal, the longer 395 northbound grew.

I pounded on the dashboard. “Come on, you pig.”

“That’s all she’s got. Governor’s kicked in.” Bones hunched over the steering wheel, bouncing his head to an inaudible rhythm.

I felt our momentum level out at seventy-five miles per hour. The management made sure to keep our speed under control, among other things.

I sat back in my seat, placing my right foot up against the dash and the door. “Is this our third cardiac arrest?”

He nodded. “Just sifting with his scythe. Folks better break off a hyssop branch, if you know what I’m saying.”

I had no idea what he was saying.

But that wasn’t unusual.

My partner, Thaddeus McCoy, had been called Bones for as long as I’d known him. The nickname seemed especially fitting, even beyond his surname, given that he wore black medic pants – not the dark navy blue like everyone else – and a black leather belt that wrapped around his front with no visible buckle on it. His pants tapered down near the top of his boots, giving his uniform a 1960s
Star Trek
appearance. He sported a wiry body frame with pale Germanic skin, closely cropped straw-colored hair, and a well-groomed moustache that, were it shaved any smaller above his lip, would bestow upon him a Charlie Chaplin–like countenance.

Our call had come in as an “unknown man down on the sidewalk at First and West, in front of the church – unknown if conscious or breathing.” Which, at the risk of sounding jaded, was generally code for “drunk guy on the street corner.” But one thing I’d learned as a medic was to never judge too early. And based on the updated report we’d received from dispatch, this sounded like the real thing. A couple minutes into our response the dispatcher advised us that per an off-duty park ranger on scene, our patient was pulseless and apneic, and bystander CPR had been initiated. She also mentioned that the Reno Fire Department had a working structure fire just north of downtown and their next-in unit would likely arrive several minutes after us. If this guy had a chance, we were it.

“Look, Jonathan,” Bones squealed in a high Mr. Bill voice, holding the radio microphone up by his side window, light posts and cars whizzing past, “I’m the fastest mic in the world.”

I refused to respond to his impromptu puppet, knowing that if I so much as acknowledged it, I would find myself talking to a derisive plastic microphone for the rest of the shift. I turned my focus to the map book in my lap. “So you want to take Mill downtown and then jog over to First and West.”

This time Bones spoke in the guttural voice he uses for our ambulance, Medic Two, which through the outpouring of his hyperactive imagination has also grown a sentient, albeit simpleton, personality. “Yes, Jonathan. That sounds good. . . . And I love you.”

“That’s great.” I cringed with the realization that I’d just validated his anthropomorphic creation.

“Jonathan,” in Medic Two’s deep, gravelly voice he continued, “I love you.”

I patted the vinyl on the dashboard as if it were a horse’s neck. “Thanks, Medic Two.”

There was no escaping this now.

I looked up at the ceiling of the cab. “Yes?”

Bones greeted other vehicles in Medic Two’s voice as we wailed passed them on the freeway. “Hello. Hi. I love you.”

At the Mill Street exit, we hit heavy traffic. Most cars pulled to the right, but one older model GMC pickup skidded to a stop in front of us. Bones locked up our brakes and laid on the air horn. I lurched forward in my seat, held tight by the shoulder belt.

“Pull to the right!” Bones motioned with his hands, mouthing his words with exaggeration. “Pull. To. The. Right.”

The driver turned his wheel and rolled right, giving us just enough room to squeeze by on the shoulder to the left. Bones shot a friendly glance his direction as we passed. Already five minutes into our response, the chances of our patient surviving decreased exponentially with every second lost. With permanent brain death occurring after six minutes in cardiac arrest, time was running out.

We shot past County Hospital and screamed west into the heart of downtown Reno. We wove between and around taxicabs and shuttle busses and passed weekly motels. The snow-covered Sierras disappeared behind the towering casinos. We swung over to First Street, and Bones killed the siren save for a couple
whoop-whoops
as he brought the box to a stop in front of the church. There on the sidewalk, in the shadow of a hundred-year-old vine-covered Methodist sanctuary, knelt a balding park ranger doing chest compressions on a pale man in a long black overcoat.

“Medic Two’s on scene – no fire department,” I reported to dispatch and opened the door. The spring air felt brisk. I grabbed the defibrillator off the gurney in back and brought it to the patient’s side, kneeling by the park ranger. “Go ahead and stop compressions.”

The patient looked to be in his sixties, sporting a scraggly gray beard and wispy hair. Yellowish vomit oozed down the side of his face. His eyes were in a fixed and dilated stare. Bones cut off his shirt. I placed the defibrillator patches on his chest and looked at the monitor to examine his heart rhythm.

“Coarse V-fib, Bones. Charging to one-twenty. I’m clear – everyone clear.” The park ranger held his hands up and glanced at his knees.

I delivered the first biphasic electrical shock and watched the man’s body arch in tension and then relax again flat upon the concrete.

I delivered a second shock. No change.

The Shock button glowed a fiery red, the air taut with the high-pitched whining of potential energy.

God, just let me have this one back
.

My finger met the button. The man’s body surged upward.

What followed was silence – and the long flat line of asystole.

I exhaled and nodded to the park ranger. “All right. Let’s resume compressions. Bones, you want me to bag him while you set up to intubate?”

I inserted a curved piece of plastic to hold back the man’s tongue from his throat. And after placing a mask over his mouth and nose, I squeezed the purple bag attached to it to inflate his lungs and breathe for him. “As soon as we get that tube, let’s drop some epi down – ”

I waved off the park ranger. “Hold up.”

The angled complexes of an organized heart rhythm graced the screen’s black background – like a repetitive drawing of a small foothill leading to a mountain peak that dropped into a valley on the opposite side. Slow at first, then more rapid.

“Sinus tach. We got pulses with that?”

Bones reached for a carotid pulse at the neck. “I got one here.”

I felt the patient’s wrist. “Yeah, me too. I’ve got radials.”

We’d gotten him back. Hope sprang forth in me. Only time would tell if we’d saved his heart but not his brain.

He was still unconscious, so Bones zipped open the intubation kit and prepared to place a breathing tube down the patient’s throat.

I wrapped a tourniquet tight around his arm. The only vein I could feel popped up in the crook of his elbow. I swabbed it with alcohol and inserted the needle. A burgundy flash of blood filled the needle hub. I advanced it just a tad more before threading the plastic catheter into the vein.

“Sharp out.” I placed the bare needle flat on the sidewalk and hooked up IV tubing connected to a bag of saline.

Blanket protocol for a patient on the streets like this involved a medication called Narcan to reverse the effects of possible heroin overdose. I administered the standard dose and squeezed the IV bag to flush it into his bloodstream.

Bones clicked into place a curved steel blade on a cylindrical handle. He twirled the sickle-shaped laryngoscope in his left hand and pulled out the short piece of plastic that held back the patient’s tongue. He positioned the head and shined the light from the end of the laryngoscope blade down the man’s throat. With his opposite hand, he angled an endotracheal tube in toward the vocal cords.

The park ranger stood wide-eyed, staring at the twisted progression of it all.

I picked up the needle from the pavement and plunged a drop of blood onto a glucometer to check our patient’s blood-sugar level. The display flashed a normal reading.

Bones withdrew the laryngoscope blade and picked up the bag mask. He seated it over the man’s mouth and squeezed. “I’m having a hard time seeing down there. I’ll give it another go.”

He set the bag mask down and positioned himself for a second attempt. He squinted down the man’s gullet, his fist straining to keep the handle in position.

Bones flipped on his back, the laryngoscope skidding away like a hockey stick on ice.

The man flashed wild eyes, found me, and grabbed my shirt collar. He labored to breathe, staring with constricted pupils and sweat beading on his brow. His mouth trembled, trying to form a sentence.

“Listen.” He grabbed the back of my neck, struggling to keep himself upright. His hands felt dirty and rough. “Arepo the Sower . . . holds the wheels at work.”

I shook my head and lifted his arm away. “He’s delirious. Here, you need oxygen.”

He slipped back toward the concrete.

Bones reached for an oxygen mask. The man tensed and winced, his heart rhythm oscillating on the heart monitor.

Bones shifted the screen to see it. “He’s throwing runs of V-tach.”

The man reached inside his coat and, with a trembling hand, produced a folded piece of notebook paper. He grasped my forearm and forced it into my palm.

“Martin.” His eyes locked with mine. “Give this to Martin.”

A Family for Christmas (Contemporary Romance Novella) by Taylor, Helen Scott
5-Minute Mindfulness by David B. Dillard-Wright PhD
War of the Eagles by Eric Walters
The Boss Lady by Lace, Lolah
A Christmas Homecoming by Johnson, Kimberly Rose
The Noble Outlaw by Bernard Knight
Abandoned Prayers by Gregg Olsen
My Fair Duchess (A Once Upon A Rogue Novel Book 1) by Julie Johnstone
Chasing Emily [Duoterra 2] (Siren Publishing Ménage and More) by Jennifer Denys
The Baker's Tale by Thomas Hauser