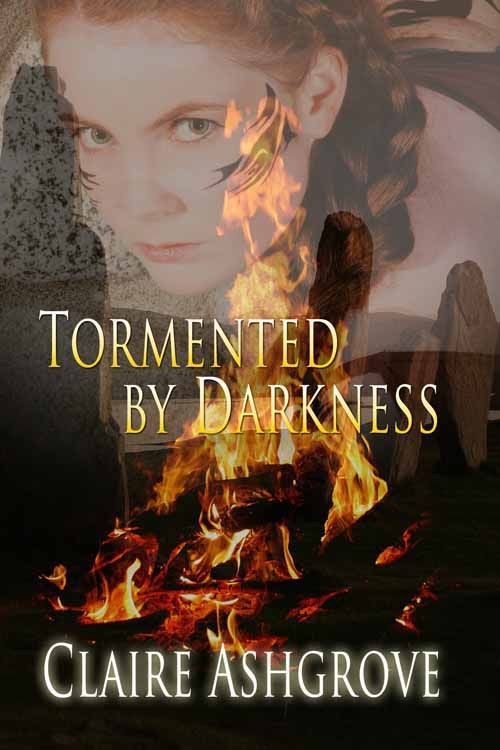 Other Titles by Claire Ashgrove

Acknowledgements or other info

For more in the Inherited Damnation series, you’ll want to read:

Thank you for purchasing this Wild Rose Press publication.

All rights reserved. No part of this book may be used or reproduced in any manner whatsoever without written permission of the author or The Wild Rose Press except in the case of brief quotations embodied in critical articles or reviews.

Other Titles by Claire Ashgrove

available from The Wild Rose Press

“
Ms. Ashgrove knows how to write a story that grabs you immediately and holds you until the very last word. She makes you fall in love with her characters as if they’re real people and when you walk away you feel completely satisfied through and through.
”

“A BROKEN CHRISTMAS
is a wonderful holiday read. Claire Ashgrove weaves a tale that will break your heart and lift it up at the same time.”

~Dyann Love Barr, author of
A Perfect Bride for Christmas
(available from The Wild Rose Press)

“Claire Ashgrove knows how to turn up the heat in her newest creation
MISUNDERSTANDING MASON
. Kirstin has all the right moves when it comes to designing ads, however when it comes to understanding her ex, Mason Montgomery, all bets are off. Designing love never is as easy as it looks. Ashgrove’s writing draws you into the story with such veracity that you are compelled to finish. Her writing leaves you as hot and bothered as those warm Atlanta nights. A definite must read for any romance fan.”

To Judy Ridgley, for your shared love of the Celts.

Acknowledgements or other info

Without the support of my family, there would be no books, no novellas, no nothing—thank you from the bottom of my heart for everything. Boys, Mom—I love you!

Thank you to Heartland Romance Authors and Midwest Romance Writers for your continued support and the "family" you've become. To all my fellow authors at The Wild Rose Press—you're wonderful, and such a fun group of people. You make everything so much more enjoyable.

Last but not least, thank you to Jewelann Cone and Callie Lynn Wolfe for your continued enthusiasm and support.

“Oh that’s right, we’re pretending your dead. Like we do every year when your birthday rolls around.”

Rhiannon McLaine shot a glare over the top of the flower arrangement in her hands. It landed on her brother, Dáire. He lounged in a metal folding chair, one ankle across a knee, his grin as devilish as the dark blood that flowed in their veins.

She chose to keep silent.

“How old are you now? Two thousand one hundred and ninety-nine or twenty-two hundred, even? It’s been so long since we’ve celebrated, I think I’ve forgotten.” He folded his arms over his broad chest, cerulean blue eyes glinting with wicked amusement. A casual toss of his head had his deep auburn hair dusting his shoulders.

He knew exactly how old she was. He was, to the night, exactly eighteen months older. And their polarized birthdays—she on Mabon, he on Ostara—forged bonds only rivaled by true twins of the womb. Those intimate ties made it possible for him to understand the barbs that flew from her narrowed gaze held no conviction.

His grin broadened as he kicked back, balancing on the chair’s rear legs. “Come on, sis, it’s just a camping trip.”

“I have things to do here, Dáire. Look at this stack of orders.” She gestured at a long line of hanging tickets on the wall beside her. “Homecoming is next weekend. There’s some big funeral tomorrow night, and I have a dozen out of town arrangements to put together. And Missy Soffet is getting married next Sunday too.”

Turning her attention back to the bright array of carnations, lilies and lush ferns in her hands, Rhiannon did her best to ignore the temptation of a weekend get-a-way. With the Mabon ritual so close, she was already a bundle of restlessness. Energy spiked, spirits drew closer to the veil between the realms, and the bits and pieces of her magical Celtic soul hungered for the rising power. An escape in the quiet mountains would make it easier to resist the calling, the dark desire to kill.

“So I’ll pop in next week and help you snip together all those homecoming corsages.” He paused, then cajoled, “It’ll be fun. Marshmallows. Chocolate. Wieners.”

Damn him, he knew she had a soft spot for S’mores. For just a heartbeat, she considered agreeing. Her chin even dipped. But before her head could lift and fully execute the nod, she held it in place, narrowing her gaze on a disobedient bloom. “Not going to work.”

“Cian and Miranda are going to come keep me company, but you won’t? I can’t believe my favorite sister’s going to abandon me on her birthday.
My
half birthday.”

Lips pursed, she tossed him a nonplussed look. “Don’t. Don’t even go there. I’m immune to your ability to influence my mind.”

He spread his hands before him, his expression innocent despite the amusement that glinted in his eyes and animated the intricate tattoo across his high cheekbones. To Rhiannon’s shame, a grin threatened to spoil her false look of annoyance. She fought the pull at the corners of her mouth and turned her back on Dáire to keep from laughing. He’d never been innocent. Not for one day out of his centuries-old life.

And resisting him, his charm, his wit, his beguiling teasing, was something she’d never done well.

“It’s
my
birthday. Shouldn’t I get to spend it how I want?”

Double damn. Sometimes she wished they didn’t share the ability to sense each others’ feelings. She did want to go. She just couldn’t justify the time away from her flower shop.

Never mind that seeing her now-mortal brother, Cian, and his fiancée Miranda, made facing her reflection absolute torture. Cian had escaped the taint of their father’s dark blood, freed himself from their inherited damnation.

Rhiannon had hoped she and Dáire might discover the same blessing. But with one day left before her birthday, clearly this year wasn’t their year to experience the gift of freedom.

“Hey, ease up,” Dáire’s voice assumed sincerity. “I didn’t mean to bring you down.”

Rhiannon shook her head and pulled in a steadying breath. “I’m okay.”
Just sick to death of what we are, of fighting this demonic nature of our father’s.

A shadow fell across her worktable, and a heavy hand settled on her shoulder. Dáire’s fingers squeezed gently. “Come with us, Rhiannon. I don’t want to leave you alone on your birthday, and I can’t fight the call in the city. It’s too strong.”

That too, Rhiannon felt. The agitation in Dáire’s soul stirred hers. The relentless need to take life grew more intolerable each year that passed, and the Sabot nights were always the hardest. It had been a long time since she’d caved to it—since they both had. But she sensed, for her twin-like brother, this year might make him falter.

She couldn’t tell him no. Couldn’t send him off with Cian and Miranda to battle the vile half of his soul and struggle to hold on to the light their mother infused within him. She glanced at the finished flower basket, reached out to straighten the electric blue bow. “Do we have to go with them?”

The shrill peal of the phone halted conversation. Rhiannon wiped her hands on her apron, tucked her long thick braid over her shoulder and scurried to the front of the shop. “Rhiannon’s Creations, how may I help you?”

The gravelly voice she’d dreamed about one too many times poured over her. With it came a vision of thick black hair, a sultry mouth, and eyes that were as dark and fathomless as a starless sky. A pleasant chill crawled down her spine, and Rhiannon clutched the phone a tiny bit tighter. “Mick Farrell, how good of you to call.”

From the corner of Rhiannon’s peripheral vision, she caught Dáire leaning against the doorframe, amused smirk once again intact. Turning sideways, she sought to hide her reaction to Mick’s phone call, though no doubt, Dáire could feel the excitement that thrummed in her veins.

Mick cleared his throat. “Yeah, listen, I know it’s late notice, but…” He paused, a harsh breath drifting through the receiver. “Can you fill an order before you close?”

Rhiannon glanced at the clock. Ten till four—she still had another arrangement to finish before they closed, but Mick’s usual half-dozen “something pinks” or “something yellows” wouldn’t take more than fifteen minutes. She grinned as a chuckle escaped. “Another lady friend, huh? What happened to last week’s flavor?”

Though the question was lighthearted, a pang of envy rose on its heels. Mick Farrell was the single-most breathtaking man Rhiannon had ever laid eyes on. He was tall and athletic, fine-tuned for the rigors of his work. The touch of wickedness in his smile promised he knew how to use that muscular body for other, more pleasurable purposes. He could melt a woman with a single look. Mick also knew it. And though he flirted shamelessly with her every time he came in to pick up his flowers for his endless rotation of women, she didn’t even register on his horizon.

Not that she wanted to. The whole falling in love with him and having to kill him curse put a damper on the giddy way his fathomless dark eyes made her feel.

At his harassed sigh, a frown pulled at her brow. No smart comeback? This wasn’t like Mick. She swallowed her smile. “You want roses, carnations—or I have some really pretty fresh-cut wildflowers. They aren’t all pink, but they’re a great date mix.”

“No. No flowers. Well. Not those kind.” He sighed again, and something on the other end of the phone thumped heavily. “A plant maybe. I’m sorry this is such short notice, Rhiannon. I don’t know, what’s easy? What can you do in triplicate?”

Triplicate? Rhiannon blinked. With an hour until closing and another arrangement already promised by five, Mick was seriously pushing her abilities. But something else deepened her frown. A sense of something not quite right. Mick was never this unsure. Never so…distracted. He knew what he wanted, almost down to the type of filler, no questions asked, no reservations.

“Mick? Are you okay?” The question popped out before she could stop it.

“Yeah. I’m fine.” Again, something thumped in the background. “Look, I’m sorry, I’m a bit disorganized right now. My stepfather passed away. The arrangements are for his wake tonight. I completely forgot about flowers until someone called.”

In a small town the size of Petersville, Pennsylvania, it didn’t take much to put visitation and funeral together and realize the swamp of orders she’d received for Steve Prescott were for Mick’s stepfather. In a heartbeat, compassion rushed forth. “Oh, Mick, I’m so sorry. Yes, I can have those done for you. I’ll have to deliver them though, what time is the wake?”

Rhiannon nodded as she pushed aside the bottles of herbal remedies she’d neglected to put on the shelves and grabbed a pen. “Where to?”