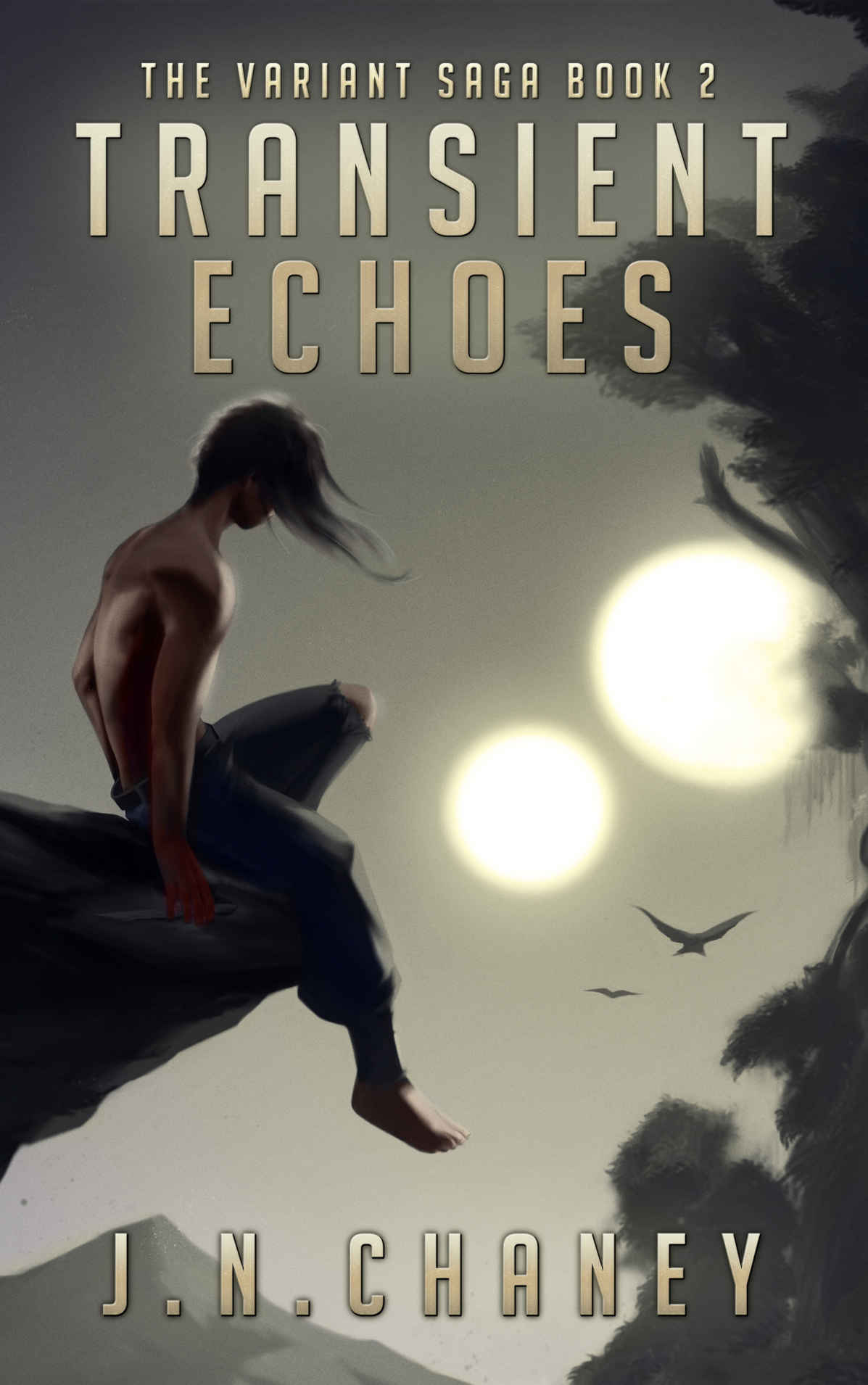 This novel is a work of fiction. Names, characters, places, and incidents are either products of the author’s imagination or used fictitiously. Any resemblance to actual events, locales, or persons, living, dead, or undead, is entirely coincidental.

No part of this publication can be reproduced or transmitted in any form or by any means, electronic or mechanical, without permission in writing from Jeff Chaney.

STAY
UP TO
DATE

Stay Up To Date

A whole new world of stories.

It has been three years since the day of the Second Jolt. Thanks to the efforts of a select few, the world is finally moving on. As the Variant air begins to thin, humanity finds itself on the cusp of a new age of exploration…but at what cost?

After closing the rift—the source of all Variant—the hybrid child known as Terry has been transported to a distant world, far away from the only home he’s ever known. Completely isolated, and haunted by voices from his past, he wanders through the ruins of an ancient civilization long forgotten.

Back on Earth, a young woman named Mei works tirelessly to uncover the secrets of the rift. Against orders, she searches for the truth, making an unprecedented gamble. Will her obsession bring the answers she so desperately seeks…or will it cause even more destruction?

who shared a lifetime of stories

but couldn’t stay for mine.

As with any book, this one could only exist through the encouragement of the wonderful people in my life. Here’s to my family for their endless support; to Sarah, who opened doors I never knew existed; to Geoff, for all the late nights plotting in the basement; to Rob, whose art is a constant inspiration to me; to Valerie, who always knew how; to James, who was there at the beginning; to Chase Nottingham, my brilliant editor; to Vickie, Steven, Corbin, and Dustin; to my amazing beta readers; and to everyone else whose name I left out. You are the reason these worlds exist.

he has the courage to lose sight of the shore
.

Across the sea of space,

the stars are other suns.

Under a violet sky
on a distant world, deep in the heart of a cerulean jungle, a teenage boy ran for his life.

The predator was close behind him, roaring, snapping branches as it crashed through the dense undergrowth, a growing blur in the distance. The boy kept low, clutching an armful of fruit to his chest. He would drop the food if it came to it, but not a moment before. The boy had searched for over a day for something to eat. He wasn’t about to give it up.

He leapt over a fallen log, bursting through the tree line into an open field of tall grass. A large cliff stood in the distance, rising two hundred meters above the ground. His camp was at the top. He’d be safe there…if he could make it.

He darted through stalks of glowing blue grass. Rigid stems whipped against his skin as he ran but didn’t slow him. After a hundred meters, he stopped, glancing back to see if the beast was still following. Where had it gone?

Silence filled the air, broken only by the blowing wind as it whirled through the valley, hitting his cheeks. He stared at the jungle, waiting.

A thunderous cry sent a flock of birds scattering from the treetops. The monster burst through the shroud of foliage into the open field, stopping a few meters from the grass. Finally in clear view, the boy could see the animal was massive. On all fours, it stood two meters tall. Thick brown hair covered most of its body, save its snout. A pair of crimson eyes fixated on the boy. Below them, two gray tusks large enough to skewer a grown man protruded. The beast’s thick calves were like cords of wood. Ropes of muscle underneath the skin stretched and tightened with every stomp.

It reared on its hind legs, towering over the field.

The boy took a step back.

With newfound motivation, the boy exploded into a mad dash toward the base of the cliff. The cries and thunderous footfalls of the predator followed.

As he neared the rock face, he could hear the creature getting closer. A rope dangled before him, lodged safely between two stones. He’d fashioned it over a year ago. It was the only means of reaching the top of the ridge. He slid to a quick halt, kicking dirt and grass into the air. The beast was closing fast.

He tugged the rope, freeing it from the crevice, and climbed, using his feet and only one arm as he hugged the precious fruit close to his chest.

The animal arrived within seconds, ramming into the cliff face, sending a shower of loose stones to the ground. A few hit the creature’s tusks, shattering into dust. It shook its head and roared, standing on its hind legs and scraping the rock wall in a vain attempt to follow its prey.

The boy did not look back. As he found the top of the cliff, he clasped the mat of blue grass and pulled himself over the edge. He swung his legs around and collapsed onto his back, releasing the fruit in his hands along with a sigh. The cries of the predator continued in the distance below him, but the fear of death was gone. He was safe.

The buttercream clouds passed overhead, partially blocking the light of the two suns, shading him. He scratched his chin, rubbing the stubble of a half-grown beard. He decided not to move again until the animal had gone, so he stayed on his back, waiting for reprieve.

The beast continued to whine, clawing at the rocks. Slowly, its cries grew softer, and it was not long before the monster turned and stomped toward the forest.

The boy sat up and stretched his arms, cracking his spine. He collected the fruit and headed toward his hut. The cliff was narrow, but widened into a spade shape. It curved and extended roughly eighty meters before dropping off. His home lay in the center between two stone walls under a large tree with wide branches and thick leaves. Beside the tree, a small brook flowed from a crack in the rock, providing fresh water. The hut itself held little space, but the boy didn’t mind. He lived alone and had for quite a while now.

After placing the rest in a basket, he snagged a piece of fruit along with his bone knife and went to the stream nearby. The produce was colorful, primarily magenta with dashes of turquoise and yellow throughout the skin. He split it open with the blade and the pink juice washed over his fingers. The smell was therapeutic, a sweet and relaxing aroma which filled his nose and watered his mouth. He bit hard into the fruit, hardly chewing as he gulped the chunks of moist produce down. His tongue barely had time to register the taste, he swallowed so quickly. He gasped as the last of it disappeared, finally remembering to breathe.

Despite the recent contribution, his stomach growled.

After rinsing the knife in the brook, he set it to the side and washed his face. The juice dripped from his cheeks into the stream, filling it with a pink glow. The boy stared into the water, watching as the natural flow of the brook returned. With it, another man’s face. Encased in chestnut hair—unkempt and naturally wild—a thin beard persisted over a strong jaw line. The stranger’s nose was thin, tucked between a set of dirt-encrusted cheeks. Who was he? What did he want? The boy stared at him, studying the unfamiliar features. The hair, the nose, the neck, the forehead.

But the eyes—yes, those were familiar. Piercing green and calm, the boy knew them well. They had belonged to him once, years ago, before this horrible place had stolen him away. Before he switched the machine off and disappeared—fell through a crack in space and landed on another world.

Those eyes, they remembered a two story apartment, deep in an underground city—the last human colony on Earth—and the family of three who lived there. They recalled the school—teachers and friends, learning and books, laughing and training. People used to say the children there were special.

In those days, the green eyes belonged to the boy alone. Now he shared them with this stranger and his tangled beard.

Terry
, a voice whispered in his mind. It was a young girl. He knew her well.
What’s a birthday? What does it mean?

He smiled into the brook, and the man returned it. “It means you grow up and get to start school,” he whispered. “It’s a pretty big deal.”

I wish I could go with you,
she said. The words lingered as a gust blew through the peak. The tree sighed overhead, rustling its leaves.

Terry shuddered, swallowing the lump in his throat. He wondered how long the voice would stay today. He usually enjoyed the visits, but only when he initiated them. He didn’t like it when they came uncalled. “Janice, go away.”

When will you be back?
She asked.

As if to answer, a well of tears formed in his eyes, and he gasped.
I broke my promise,
he thought.
I said I’d come back, and I never did. I lost her. I lost them all.

The more he remembered, the more he wept until a steady flow of gentle sobs bled out of him and poured into the water. The tears fell, distorting the image of the man, colliding with the familiar emerald eyes the boy knew so well.

FINN
: How long until you come home?

CURIE
: Not for another week. We’re still establishing the outpost.

FINN
: But you’ve been gone a month already.

CURIE
: These things take time. Besides, you’re always disappearing to go on some mission or another. Can’t I do the same? Go ask Colonel Ross to give you some busywork if you’re bored.

FINN
: I’m not bored. I just miss my girlfriend.

CURIE
: I know. I miss you, too. But I can’t leave my team in the middle of a project. I have responsibilities. We all do.

CURIE
: All the way out here?

CURIE
: It’s desolate and empty. There’s only five of us. You’d be so bored.

FINN
: Our birthday is in two days, Mei. We always spend it together. Who cares if there’s nothing to do?

Game: A Thriller by Anders de La Motte
The Bed of Procrustes by Nassim Nicholas Taleb
Gemini Rain by Lj McEvoy
Rendezvous at Midnight by Lynne Connolly
Vision of Love by Xssa Annella
Shattered by Donna Ball
Whispering Nickel Idols by Glen Cook
The Collected Works of Chögyam Trungpa: Volume 6 by Chögyam Trungpa
Into the Darkest Corner by Elizabeth Haynes
The Tryst by Michael Dibdin