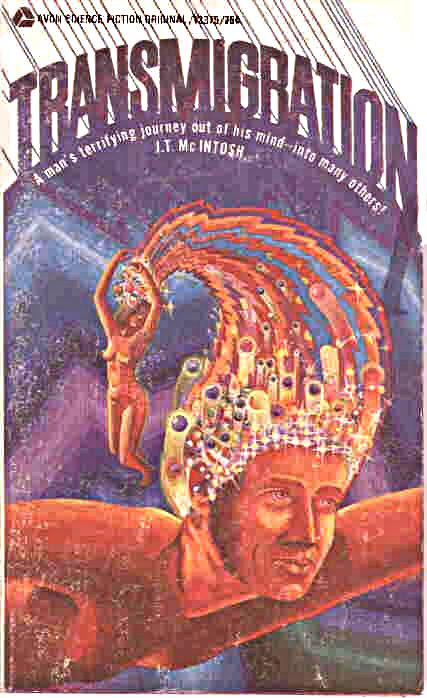 TRANSMIGRATION
by
J.T. McIntosh
CONFRONTATION!
In his unwilling travels from mind to mind,
Fletcher had lived in the brains of many people --
young, old, healthy, ill, men, women. But now
he found himself in the brain of Charles Searle --
the man who was responsible for his ghastly
situation -- the brilliant and ruthless scientist who
had altered Fletcher's mind and left him, finally,
a disembodied personality. His lifelong unhappi-
ness and the ultimate torment of endless dying
were the result of Searle's insane arrogance.
And now Fletcher shared his brain.
And Searle was dying . . . .

SNOW WHITE AND THE GIANTS

This is the first American publication

of TRANSMIGRATION in any form

Published by arrangement with the author.

All rights reserved, which includes the right

to reproduce this book or portions thereof in

any form whatsoever. For information address

The doctor said quietly: "Since you insist . . . there's no doubt."

"How long until it kills me?"

The doctor looked shrewdly at him, made up his mind, and said bluntly:
"Eight months. Probably only five. Possibly three."

Fletcher laughed as he had not done for years, with real enjoyment. The
doctor was puzzled; he could recognize hysteria, and this was not hysteria.

"It can be beaten, doctor," said Fletcher at last.

The doctor started to shake his head. He had not wanted to pass sentence
on this tall, gaunt spider of a man whom he scarcely knew, whose lean
face bore the marks of loneliness. But truth was truth. Having insisted
on it, Fletcher should not be allowed to deceive himself. The doctor in
such circumstances allowed, indeed encouraged, most people to deceive
themselves. This man was different.

"It will be beaten," said Fletcher. He laughed again, but this time there
was no amusement in his laughter. "Don't you recognize the pall of death
on me, doctor? Others do. Not everybody sees it yet Not young people,
or happy people, or strong, confident people. But those who are close
to death see Death sitting on my shoulder, and shrink back as I pass."

The doctor, who had until then had no doubt of Fletcher's sanity,
started to say something calm and reassuring.

But Fletcher went on: "It will be beaten, doctor. I'm going to beat
it by dying; not in eight, months, or five months, or three months,
but in a matter of days. No, don't look at me like that. It won't be
suicide. Never mind. Forget all about me, doctor. When I die, the world
won't know the difference. I was never really here anyway."

Out in the street he was ashamed of his outburst. It was only the genuinely
amusing irony of one death sentence being frustrated by a prior death
sentence which had made him so unusually loquacious. And of course the
doctor could not be expected to understand.

Moved by a sudden sense of urgency, he wanted to see Baudaker again, and
at once. In his whole life, in all his forty-three years, thirty-nine of
which he remembered, he had aroused excitement only in one unprepossessing
little laboratory technician; a man who thought he had found in John
Fletcher a world-shaking discovery. And even John Fletcher had some
urge toward immortality. Although he had slammed the door on Baudaker
and his psi tests eighteen months earlier, sickened by the prospect of
being proved a freak, he now felt prepared to accept even that dubious
distinction. To be a mental freak was better than being nothing at all.

Poor little Baudaker . . . he wasn't one of the death people, yet he jumped
at his own shadow. It was life Baudaker was scared of, not death. If he had
ever been a little more assertive he would surely have become something
more than a laboratory office boy.

From a phone booth just outside the surgery room, Fletcher called the
university. Mr. Baudaker was not available. Could he call back in an
hour? Fletcher said that he would.

On the way back to his bed-sitter he stopped at a supermarket and bought
a large steak pie. He was not hungry, but the habit of many years was too
strong to he broken. In addition to lunch, dinner and supper, he always
had a substantial snack in mid-afternoon. Fletcher was not a solitary
drinker, he was a solitary eater. He delightedly gorged himself in secret,
yet his long, lean body never revealed the secret. Not that it mattered:
who would have cared?

Back in his room he put the pie onto the tiny oven hotplate and stretched
himself out on the bed. Any activity had become an effort. The tumor deep
inside was not yet troubling him except in the vaguest ways, this being
one of them. He could still eat, but he could no longer enjoy food. He
could walk, even run, but given a choice he remained inactive. And the
thought of women, so often a torment in his forty-three lonely, tortured
years, no longer bothered him. In that respect he was at peace. No longer
was he torn apart by incompatible urges to seek out women and to keep
his distance: to never touch them.

He reflected that he was suddenly rich. When he left his last job seven
weeks since, he had given himself a maximum of two months to find suitable
employment. This had always been difficult for him; not because he lacked
skill, intelligence or experience, but because his unlucky temperament
made it impossible for him to work easily with others -- especially women.

Now, the few pounds in his bank account would not have to keep him for
six months, but could keep him in opulent luxury for a few days.

By the time he had wolfed the pie, nearly an hour had elapsed. He had to
go out again to phone. There was a telephone in the hall, but he never
used it.

It was Judy, the landlady's daughter. She stood in the doorway of her
bedroom in a shapeless sweater, an incredibly short skirt, and nylons
far too large for her which hung loosely about her skinny legs.

"Why aren't you at schoolS" he asked.

"I fell yesterday. I've got a broken leg and a broken ankle and I'm
to stay at home for two weeks, the doctor said. And my radio won't
work. Mr. Fletcher, could you fix it?"

"You can't have a broken leg or a broken ankle, Judy. You wouldn't be
able to stand."

"Well, my ankle's big and my knee is sore. Come in and I'll show you. And
will you fix the radio?"

He entered the room rather awkwardly. Until a few months ago he had
been able to talk more easily to Judy than to anyone else. She didn't
look and seldom sounded backward. She was a happy, pretty little thing,
and it never mattered what anyone said to Judy, for her mind was like
a bucket with a hole in it. He had been at his ease with her as with no
one else, and she actually liked him; not knowing any better.

But just as death closed its grip on John Fletcher, life began to beckon
Judy MacDonald. Her mental age might be about five, but she had lived
twelve or thirteen years, and nature decided it was time she became a
woman. And Fletcher's ease with her was shattered.

"I'll show you my sore leg," she said like a child, and then turned away
from him like a woman. "Don't look!" Turning away wasn't enough, however,
and she skipped behind the massive old wardrobe to take off her stockings.

The radio was an ancient floor standing model. In moving it nearer the
bed on which she had been lying, Judy had pulled one of the leads from
the plug. He restored it, using his pocketknife as a screwdriver.

She came skipping back. For the moment she was so like the gay child of
last year that he was able to examine the swollen ankle, only slightly
sprained, and make the appropriate sympathetic remarks. But then she
flung her skirt right up and put her bare leg along the back of a chair
so that he could inspect it, and he started back uneasily.

"It's all right, there's no blood," she reassured him. "In fact, I can't
see anything wrong, but maybe you can."

Her new modesty went with her new bra and borrowed nylons. He was not
supposed to look as she took off her stockings, but once they were off,
all was well and she could hold her skimpy skirt high for him to examine
her knee and thigh closely. Fletcher, compelled to make a thorough
examination because she would not be satisfied with less, reported that
he couldn't see anything wrong either.

"Well, it's sore," she complained, dropping her leg and casually shrugging
her skirt down. "Worse than my ankle."

"I'm supposed to rest, but walk about, and not go out. So I need the
radio. Will you be able to fix it?"

Fletcher switched it on, and the pilot light glowed.

"Oh, you've done it already! I knew you could fix it, Mr. Fletcher.
You can do anything, can't you?"

"Not really," he said. "It's astonishing how little I can do."

"Oh, you're making fun of me. You can fix radios and put my doll's head
back on, and speak French and German."

"Life demands more than such talents sometimes," he said drily,

"Mummy's out working, and I'm supposed to rest most of the time, and
not go out. Could you stay for a while, and speak French to me?"

He closed her door behind him and went downstairs. 'You can do anything,
can't you?' Only Judy would say such a thing.

He could do nothing. That was the story of his life. He had never succeeded
in anything. He had a magnificently consistent record of total failure.
You always knew where you were with John Fletcher . . . nowhere.

After a long wait, he got Baudaker on the phone.

"Fletcher!" The little technician squeaked with delight. "You're prepared
to come back? You'll let me do more tests?"

"Tonight will be fine. Where?"

"Here at the university. In the lab where you were before, you remember?
I'll need helpers, but I'll easily get half-dozen student volunteers.
Could you come about seven?"

"Certainly. How long do you want me to stay?"

Another pause. Fletcher could guess that the timid little technician was
trying to screw up his nerve -- two hours, four hours if he asked for too
much of Fletcher's time, he might change his mind and not come at all.

Morgarten (Book 2 of the Forest Knights) by J. K. Swift
Binding the Shadows (Arcadia Bell) by Jenn Bennett
Cuentos inconclusos de Númenor y la Tierra Media by J.R.R. Tolkien
First Offense by Nancy Taylor Rosenberg
A Family Madness by Keneally, Thomas;
The Searchers by Glenn Frankel
A Map of Betrayal by Ha Jin
The ALL NEW Don't Think of an Elephant!: Know Your Values and Frame the Debate by George Lakoff
The Fecund's Melancholy Daughter by Hayward, Brent
Raising the Ruins by Gerald Flurry