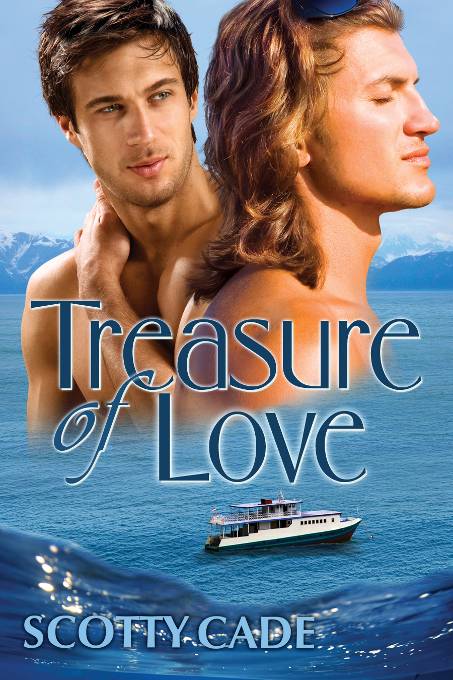 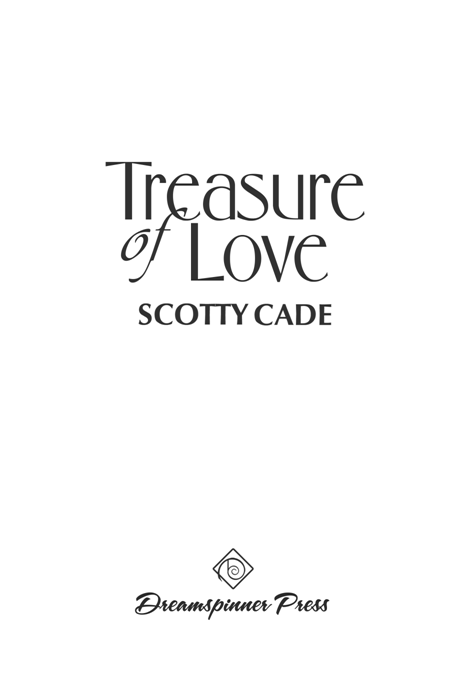 All rights reserved. No part of this book may be reproduced or transmitted in any form or by any means, electronic or mechanical, including photocopying, recording, or by any information storage and retrieval system without the written permission of the Publisher, except where permitted by law. To request permission and all other inquiries, contact Dreamspinner Press, 4760 Preston Road, Suite 244-149, Frisco, TX 75034

First and foremost, always to Kell, I love you.

And to my built-in Martha’s Vineyard entourage, the BNO boys, Paul, Jonathan, Scott, Shawn, Justin, and Dudley, you guys have brought so much to our lives and your support and friendship means the world to us. Thank you!

S
AFELY
docked in Skagway, Alaska, and awaiting his next charter, Dive Master and Captain Jackson P. Cameron was spending a leisurely afternoon lounging on the deck of the
Lindsey C
, his seventy-five-foot dive boat. Soaking up the warmth of the Alaskan summer sunshine and enjoying the gentle sound of the waves lapping against the hull, he was debating on making a big change in his life. He’d been diving and doing charters for the last ten years and was hitting the burnout period. It wasn’t a bad life, and he did get to do what he loved—diving and captaining his own boat—but his heart told him it was time for a change. Unfortunately, his wallet told him otherwise.

Everyone needs a change every now and then, damn it. This is my time
, he thought.
Money or no money, when my next charter’s done, I’m taking a few weeks off and heading to a warm, sunny climate to decide what I want to do with the rest of my life.

His tranquility was suddenly interrupted by the voice of Johnny Horton singing the old country classic, “North to Alaska.”
Why in the hell did I choose that stupid song as the ringer on my cell phone? God, I hope this isn’t another charter.
He dug his phone out of the pocket of his khaki shorts, lifted it to his ear, and said, “Jack Cameron.”

“Is this the Jack Cameron who owns the charter boat
Lindsey C
?” the caller asked.

The caller said, “I’m Daxston Powers. I’m sure you’ve probably heard of me.”

Jack did a quick scan of his mind’s database. “Nope, can’t say that I have,” Jack responded. “But what can I do for you… Daxston, is it?”

“Yes, but you can call me Dax,” the caller responded in an annoyed tone. “I would like to meet with you to discuss securing your boat for a long-term charter,” he said.

“I’m not completely sure. It depends on how long it takes you to find what I’m looking for. It could be a couple of weeks on the low end and up to three months on the high end.”

Dollar signs flashed in front of Jack’s eyes, and then the realization hit him.
There goes my time off.

Not wanting to seem too anxious, he said, “I’ve got a pretty tight schedule, but sure, we can meet. When and where?”

“Where are you now?” Dax asked.

“I’m docked near the ferry landing in Skagway,” he replied. “My next charter pulls away from the dock at two o’clock tomorrow afternoon.”

“I’ll be at your boat at ten a.m. sharp tomorrow morning,” Dax said, and hung up the phone without waiting for a response.

“I’ll be he—” Jack said as he heard a click in his ear before he could finish his sentence.

“Arrogant bastard,” he said to himself as he looked at his cell phone.

He hit the “end” button and slipped the phone back into his pocket. He stretched out again for a second time and tried to place the name Daxston or Dax Powers, but nothing came to mind except
arrogant bastard
.

“North to Alaska, They’re goin’ North, the rush is on.”

Damn, I really have to change that.
He immediately felt a flash of guilt:
maybe the guy didn’t hang up on me after all
. Without looking at the caller ID, he put the phone to his ear and started to speak.

“I guess we were disconnected.”

He heard a short pause on the other end of the line. “Nope, try again,” the caller said.

His former brother-in-law and best friend, Mac Cleary, was a floatplane pilot who now lived in Hiline Lake, Alaska, with his partner, retired oncologist, Dr. Bradford Mitchell. Mac had been happily married to Jack’s sister, Lindsey, until she had died of cancer eight years ago. After being alone for over five years, Mac had unexpectedly reconnected and fallen in love with Brad, a former passenger. Brad had recently lost his partner, Jeff, to colon cancer, and the two men had formed an unbreakable bond, which over time had turned into love. Jack had had a hard time dealing with Mac’s sudden change in lifestyle, but eventually he’d come to accept it, and if he was honest with himself, was a little envious of their loving relationship.

“Not much, Jackie, just checking in. I haven’t talked to you in over a week. Are you on a charter?”

“Not yet, but picking up a three-day run starting tomorrow afternoon.”

“Diving,” Jack responded. “Don’t do much fishing anymore, it really takes a toll on the boat, and it’s too damn messy. Hey, how’s Bradford?” Jack asked.

“He’s good,” Mac said. “We just landed in Anchorage for an overnight trip to pick up supplies. We haven’t left the lake since we got back from Europe, and we’re starting to get down to the bare necessities.”

“It must be nice to retire so young and have the means to go on one adventure after another, and then escape back into the solitude of the Alaskan mountains for weeks at a time to rest up,” Jack said, with quite a bit of envy in his voice.

“It is nice, no doubt about that,” Mac said. “But Brad’s the one with all the money. Who would have thought that at this stage of my life I would be married to a rich doctor?”

“I need to find a rich doctor to take care of me,” Jack added.

“I know,” Mac admitted. “But we’ve been on the go for most of the last two years, and although I know he loves it when we get home, I can tell he’s already starting to get cabin fever.”

“You guys never let any moss grow under your feet, and I love that about you,” Jack said. Jack heard Mac start to speak again, but his words faded into the background as he zoned out and stared out over the horizon.
It sure would be nice to have someone special to share my life with.

“I was saying that I guess we’re both enjoying life again,” Mac confided. “Those five years after Lindsey died, I was barely going through the motions of living. And Brad, he was fighting so hard to cure Jeff’s cancer, he thought of little else. And when Jeff had had enough of the unsuccessful treatments and decided he was ready to give up, Brad supported his decision and never left his side. I think a piece of us died with each of our partners, and we’re just now starting to live again.”

“I think you guys have been really good for each other,” Jack shared. “It’s no secret that it took me quite a while to get used to the idea of you two, you know, being together, but now I can’t imagine you
not
being together.”

Mac chuckled. “Oh, you don’t have to remind me of how much of a pain in the ass you were,” he said.

“Come on, Mac, that’s water under the bridge,” Jack said. “You seem happy now, and that makes me happy,” Jack added, meaning every word.

“Not to change the subject, Mac, but have you ever heard of someone named Daxston Powers?”

“Daxston Powers,” Mac mumbled to himself, certain he recognized the name. “Oh yeah, I think he goes by Dax,” he said. “He’s one of those modern-day treasure hunters.”

“Yeah. Brad and I just saw a documentary a couple of weeks ago on the Discovery Channel about his last expedition.”

“The Discovery Channel. He must be pretty famous,” Jack said.

“What do you mean?” Jack asked.

“Well, in a Geraldo-Rivera-finding-nothing-in-Al-Capone’s-vault sort of a way,” Mac responded.

“Let me see if I can get this right,” Mac continued. “Last fall, Powers was off the coast of Cape Horn in search of a clipper said to be carrying a bounty of diamonds, rubies, and emeralds. I think it was called the
Sarah Maria
. And according to the documentary, the information surrounding the
Sarah Maria
’s demise had been so vague that she’d eluded treasure hunters for the last one hundred and fifty years.”

Jack interrupted, “So I’m sure finding that wreck would help to validate his work and boost his career,” he said.

“Pretty much,” Mac continued. “He knew that if he found the wreck, he would garner some much-needed recognition and credibility to help him find investors for future expeditions.”

“And that’s why he invited the Discovery Channel to film the entire expedition,” Jack added. “So, did he find the wreck?”

“Much like Geraldo found the vaults, he found a wreck, but unfortunately for him, it wasn’t the
Sarah Maria
.”

“Oh, nothing, go on,” Jack responded.

“Okay, it’s official, you’re very weird,” Mac teased. “But that’s not the best of the story.”

“Oh yeah, on the last day of the failed expedition, they were caught off guard by an unexpected fall storm, and Dax’s research vessel,
Hunter’s Instinct
, went down in very high winds and pounding seas.”