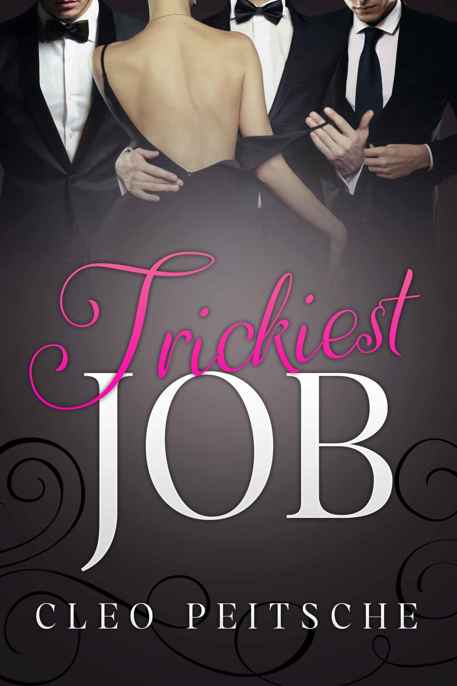 TRICKIEST JOB
© 2015 by Cleo Peitsche. All rights reserved worldwide. No part of this book may be reproduced in any form or by any electronic or mechanical means without permission in writing from the author. This is a work of fiction. All names, characters, events, locations and incidents are either the product of the author’s imagination or are used fictitiously, and any resemblance to any persons, living or dead, events or locales is entirely coincidental. This book is for entertainment purposes only.

This book contains mature content and is solely for adults.

Thank you for purchasing this ebook. I hope you enjoy reading it as much as I enjoyed writing it, and I look forward to sharing more of my stories with you.

Why join my mailing list?
Because I release new stories at a special price to thank my readers!

Other Titles By Cleo

Trapped by a Dangerous Man

Wanted by a Dangerous Man

Saved by a Dangerous Man

Tempted by a Dangerous Man

Seduced by a Dangerous Man

Dared by a Dangerous Man

Broken by a Dangerous Man

Master of the Deep

Blood in the Water

Lindsay has never been so alone in her life.

After a private investigator exposes her, she’s on the run once more. Her bottomless bag of tricks is empty, and she’s filling it to the brim with regrets and mistakes.

As danger builds, Lindsay can’t stop thinking about her dominant bosses. Maybe Romeo, Hawthorne, and Slade could save her.

Maybe… if they could find her.

I’m running out of things to wear because I’m afraid to leave the hotel room. I lay out my dirty clothing on the bed and try to convince myself that some of it can be re-worn.

Sixteen outfits, yet only a week has crawled by since I ran from Romeo, Slade and Hawthorne.

We were so busy at work, I didn’t have time to drop laundry off at the dry cleaner. Or to pick clothes up; several of my outfits are missing, including my two favorite dresses.

They were expensive ones, too. It figures.

Thanks to Hawthorne, I’ve got money, but the hotel room is burning through it faster than I’d like—every dollar spent is a dollar I’ll have to pay back, after all. I anxiously twirl a lock of long, platinum blonde hair between my fingers.

The family mansion is only a twenty minute drive away, and I’ve convinced myself that my grandfather, or one of his employees, is lurking just outside the hotel exit, waiting to grab me.

That’s ridiculous, of course. No one knows where I am. But fear is like an inexhaustible weight that slows my thoughts, my movements.

I decisively push my hair behind my shoulders—hair-twirling is an irritating habit I seem to have recently developed—and try to focus.

That blue blouse… I only wore it once. I pick it up, press my nose into the silk.

Maybe it’s wishful thinking, but I catch traces of Slade’s woodsy aftershave embedded in the fabric.

Pinning it down is like trying to grab a wisp of fog; it keeps slipping away.

But… oh… there it is. Cedar and musk. I feel Slade behind me, his dark, baby-fine hair brushing against my cheek as he lays a trail of biting kisses down my neck. His large hands cup my shoulders as he bends me forward, and his muscular legs press against the backs of my thighs.

Impossible to think of Slade without Romeo and Hawthorne. My brow furrows, but I can’t summon them.

I’m so desperately lonely that it makes me sick. I was sixteen when I left home. I know how to be on my own, taking care of myself.

The blouse still in my hand, I go to the window and pull back the faded curtain. It’s a blindingly sunny day.

In the parking lot below, the sun reflects painfully off the windshields. Every day, different cars. It’s reassuringly anonymous.

Squeezing the handle tightly, I crank it in a tight circle, and the bottom of the window creaks open several inches.

I lean down, putting my nose to the stream of warm outside air, and I inhale. I hope for clean air, like sherbet to cleanse the palate between dinner courses. What I get is the sharp metallic odor of the window frame.

On the other side, on the narrow ledge, I see cigarette butts and a desiccated spider, its folded legs like crimped black thread.

Still, I inhale deeply and hold my lungs full as I straighten.

I exhale until I’m completely empty.

I bring the blouse to my nose, close my eyes, and inhale slowly.

Romeo’s sitting in a chair. He lifts a hand and motions for me to come closer. Despite the expensive suit he wears, even these small movements ripple his massive chest and arms. Slade presses on my back until I’m bent over Romeo’s lap. Hawthorne stands to the side, his belt dangling loosely from his fingers, his icy blue eyes intense. My bosses’ hands move me, reposition me. They know what they want, and they know what I need. Through my blouse and my tight skirt, I feel the heat of their bodies—

The smell disappears, and I open my eyes.

It’s embarrassing to admit, but the fact that they haven’t called hurts.

I haven’t had friends in years. Perhaps the rejection by my bosses is a small matter, a slight of no consequence, and I just don’t have the perspective to see it.

Enough is enough.
I’ll never see them again. It doesn’t matter if they were using me. It was a mutual arrangement.

The blouse gets tossed onto the bed, and I contemplate the pile of clothes. Another two days shouldn’t be a problem—I’ve got a few things in my new suitcase—but I’m cutting it close.

I begin scooping up the clothes and dumping them into a canvas laundry bag. My heart pounds as I grab my purse and head for the door.

Bandit, my cat and furry co-pilot, looks at me quizzically with shiny yellow eyes. He’s probably wondering if I’m actually going to make it to the car this time.

It’s a fair question, and I step over him before I lose my nerve.

I find a dry cleaner in a quiet little strip mall that didn’t exist when I was a kid. There’s a nail salon that promises a free hand massage with the purchase of any manicure (gel excluded), a tax place that looks deserted, the dry cleaner, and an uninspired, second-rate grocery store.

It’s the sort of shopping center my grandfather would never frequent, and that makes it safe.

After reluctantly handing over my prized possessions to the woman running the dry cleaner, I duck into the grocery store to purchase fresh fruit and pre-washed salad, and also some kitty toys for Bandit, who went from semi-feral, to Hawthorne’s sister’s house, to my apartment, and now to a hotel room. His living arrangements couldn’t get much more cramped, and he seems to be getting tired of the whole adventure.

He deserves better. So do I, come to think of it.

Right there, in the pet food aisle, I decide that as soon as my dry cleaning is done, we’ll leave. I add a packet of kitty treats to my basket.

It’s nice being away from the hotel, and I spend far too long wandering the aisles before heading to the checkout line.

“Good afternoon,” the cashier says. It’s a rote expression, no reply needed, but I mumble back the greeting while I pull my money out of my purse.

“Lindsay?” the cashier says, her voice choked with surprise.

My head whips up and the blood drains from my face.

The cashier is the oldest sister of my high school best friend. She’s much heavier now, and even though she can’t be older than thirty, her formerly jet-black hair is shot with gray.

“Maria!” I say, hoping I sound pleasantly surprised rather than unpleasantly alarmed.

“I can’t believe you’re back!” She leans across the conveyor belt and squeezes me in a hug. She smells like apple shampoo and hair spray. “Look at you,” she says. “You were always pretty, even as a tomboy, but now you look like a model. Some people have all the luck.”

Yeah, lucky. That’s me. I force a smile.

“It’s so nice to see you,” she says as she resumes slowly ringing up my groceries. I want to reach over and help her. If it wouldn’t be so suspicious, I’d just run out the door.

“Have you talked to Aggie?” she asks, and of course she pauses.

“No time. I’m only passing through, in a hurry,” I say quickly, hoping she’ll take the hint. I’m vaguely aware that someone has gotten in line behind me.

“What happened?” Maria asks, and she’s doing a pretty good job of keeping the accusation out of her voice. “There were so many rumors, and no one believed that you ran away. We all thought maybe you’d moved in with your biological father… Aggie hired a private detective, you know.”

“No, I didn’t know. She shouldn’t have…” Guilt hits me hard, leaves me stunned. Their family isn’t wealthy, so Aggie would have paid the detective with money from her tutoring job.

“We didn’t know what to believe,” Maria says when I don’t volunteer more.

I know I’m going to be the topic of conversation as soon as Maria takes her next break. It will spread fast. Aggie will call Stacy, who will probably tell Mark. Mark’s little sister is friends with Layla, my sister. At least, he was seven years ago.

I swallow and look nervously behind me. Two people in line. Neither looks familiar, but sooner or later…

To my relief, Maria resumes ringing up my order, and I hand her a crisp one hundred dollar bill.

She’s telling me about Aggie, how she moved back home after college and is working part-time as a substitute teacher while applying to graduate school for physics. Maria hands me my change and shakes her head, smiling in disbelief.

“Aggie is going to freak when she finds out you’re back. She’s babysitting my kids right now. You should go over.”