Read Trouble in a Stetson Online 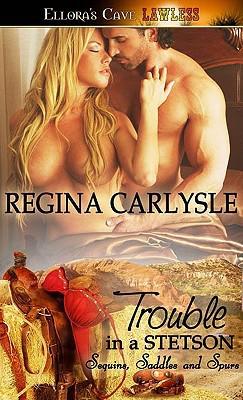 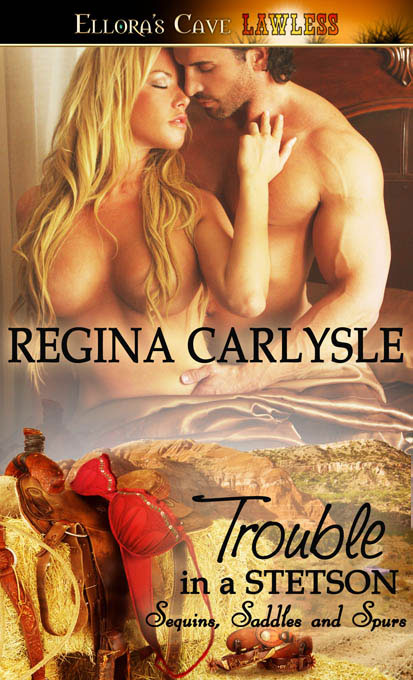 Book two in the Sequins, Saddles and Spurs series.

Lola Lamont leaves Vegas with two pals, never imagining they’d break down in small-town Texas. So what’s a former showgirl to do when she runs smack dab into the hottest sheriff south of the Mason Dixon line? Why, jump his bones, of course!

Sam Campbell takes one look at the Vegas Bombshell and knows damn good and well she belongs in his bed. She probably has the words
gold digger
tattooed to her ass but he’s ready to take what the sexy blonde has to offer. Vowing to protect his heart, Sam rocks her world. Too bad she’s rocking his right back. Sam is more than ready to handle some sass, spunk and sex, but is he willing to gamble on love?

TROUBLE IN A STETSON

This book is dedicated to all who have been told they are too pretty, too ugly, too skinny, too fat or are judged on the basis of skin color, political leanings or religious beliefs. This is also dedicated with love and affection to my daughter.

Lola Lamont gave her poor old pink Caddy a baleful look through the plate glass windows of Blue Belle’s Café and heaved a giant sigh. Her sweet baby had pretty much bitten the dust and her current companions at the table were right, she needed to be put out of her misery. Lola and her friends, Roxie and Emily, had rolled into the tiny town of Mesa Blanco, Texas with the old monstrosity of a car gasping and wheezing like a two-pack-a-day smoker.

Refugees from Vegas, the three friends had, in a moment of madness, said
to hell
with it
and loaded up for a grand adventure with only pennies in their pockets and the good sense of a trio of pigeons.

What the hell had they been thinking?

The sad truth of the matter was they hadn’t been thinking at all. Roxie had lost her job as a security expert for high stakes gaming at a Vegas casino and Emily had been a victim of downsizing at the hotel where she worked. And herself? Lola sighed, still feeling the pain of it all. She had been fired from her show
Pink Flamingo Girls
for being too old. All those years of dance lessons and keeping her body in primo shape had turned to nothing just days after her thirtieth birthday. Then to make matters worse, her boyfriend Nick had dumped her days after that. Talk about a double whammy. Lola had never been one to have little pity parties for herself but she was about as blue as the décor of Mesa Blanco, Texas’ only café.

They’d stumbled into the place, exhausted, stressed and dying of thirst only to be met by three of the hunkiest, rope-’em-up, tie-’em-down cowboys they’d ever seen. The place had been practically empty except for them and, gallant gents that they were, the men had treated them to soft drinks, lord love ’em. Wyatt Cavenaugh, a local rancher, had already offered Emily a job as a cook of all things. Dang woman could barely boil 6

water. Together they’d driven off in the man’s big truck. Roxie was, at the moment, caught up in a low conversation with the handsome owner of the local honky-tonk.

Tension ratcheted up a notch when the other dark, hunkalicious man moved closer to her and leaned in. The scent of him filled her head. “Want another Coke?”

Lola felt that deep, gravelly and oh-so-sexy voice roll over her body to settle in her pussy. Uh-oh. Trouble in a Stetson, for sure. Ever a sucker for a rough, smoky voice, she nodded. “You’re sweet but no thanks. Sam, is it?”

He tipped his big, black Stetson, his dark eyes burning with a look she’d come to recognize from just about every man she’d ever met. Hunger. Desire. Lust. Definite interest. Ooh boy. Did she
ever
know that look. “Sam Campbell, county sheriff.” His kissable lips turned up at the corners and Lola’s heart thumped hard in her chest. Late afternoon sunlight beamed through the window near the table to settle on the lines of his bronzed, weathered face and glinted on dark hair that she was dying to get a better look at.

Arching a brow, she gave him a considering look. “And you’ve come riding in on your big white horse?”

“My hero. Nice to meet you.” Smiling, she held out her hand which he immediately engulfed in his. The warmth of his touch was sudden and unexpected and Lola felt the loss when he finally released her.

Damn if he wasn’t the sexiest man she’d seen in a long, long time and that included Nick Mantucci whom she’d thought was awfully handsome. Nick was a smooth operator who wore designer suits as if he were born to them. Not this man. Sam Campbell could’ve stepped out of a scene from one of those old shoot-’em-up movies she used to watch late at night when she couldn’t sleep. Tall, at least six-four or five of brawn and yummy goodness, he not only wore the authority of the sheriff’s badge 7

pinned to his black shirt but carried it on his broad shoulders. The chest beneath that shirt was mounded and muscular practically making her fingers twitch with the need to touch. The man oozed testosterone and wasn’t this a hell of a time to notice such a thing?

Mentally rolling her eyes at her silly turn of thoughts, she glanced away regretfully thinking,
wrong time and wrong place
. Besides, she was just done with men. Especially those who made promises they’d had no intention of keeping.

“So what are you gonna do, Miz Lola?” Sam quietly sipped his coffee.

Sighing deeply, she jabbed her straw into her now empty beverage glass, making the ice cubes rattle. “Look for a job, I figure.” Feeling more tired than she’d felt in years, she leaned back in her chair and sent her gaze around the room as she tried to think.

Her eyes lit on the fluorescent orange “help wanted” sign in the window. Straightening suddenly, she started to get up then remembered her manners. “Excuse me a minute, Sam.”

Feeling his gaze on her back, Lola grabbed up the sign and walked up to the taciturn, gray haired woman standing behind the counter. The heels of Lola’s cute high heeled sandals click clicked out a warning and the matronly lady glanced up with a frown.

Can you tell me who I need to talk with about a job?”

“You’d need to talk to me. I’m Belle Warren.” Belle, all of five two and built like an army tank, looked her up and down slowly and Lola got the feeling she didn’t like what she saw. Figured. Lola was pretty much used to that reaction. “Where ya from, little missy?”

“Bull dung,” she said matter-of-factly. “That ain’t no city voice you’ve got there, girl.”

Lola opened her mouth to speak when Sam walked up and set his coffee cup on the counter. “Can I get a refill, Belle?”

That got a smile from Belle as she grinned and reached for the coffee pot. “Sure thing, Sheriff.” Seeming to forget Lola’s presence for the moment, she finally turned back to Lola and planted her fists on ample hips. “No sirree. You’ve got the deep south stamped all over you. Where you from?”

Sam propped his gorgeous, denim-covered butt on the nearest stool and listened unabashedly. Though it was damn hard, Lola tried to forget about him and focused on Belle.

“I’m from a little bitty town just outside Jackson, Mississippi.”

“You grew up there?”

“Yes’m. And I waited tables too. From the time I turned sixteen. I’m a really hard worker, Belle.”

“Hmph. Well, we’ll just see about that, I reckon. Now this ain’t permanent. Got that? Merrylee Hawkins just had a baby and she’ll be back for her job in about six weeks or so. That’s all I’ve got to offer.”

“Oh no, that’s okay,” she rushed. “I just need to make enough money to get out of town.”

“Why? You have somewhere you need to go?”

Lola had to think about that.

No, she really didn’t but she just couldn’t see herself staying here. The sleepy town of Mesa Blanco was far too similar to the town where she grew up and she hadn’t been able to leave that place fast enough. Nope. She wouldn’t be staying. Finally she shook her head and sighed. “Not really. I guess I just need some time to figure things out.”

“Okay then, I’ll try you out for awhile, Lola.”

Relief swept her and then she thought of something else. “Can I ask you a question?”

“Someone mentioned something about a rooming house?”

“Staying there requires money,” Belle said. She pursed her lips and then seemed to come to some kind of conclusion. “Listen here. There’s no need for that. I reckon you’re pretty much busted.”

“You’ve got that right. I’m a downright pauper at this point.”

“I figured. You ladies rolled in here without two plug nickels between you considering the three of you were gonna share one drink. Hell, I was prepared to contribute to the cause until Sam here, Wyatt, and Cliff jumped in to spring for the drinks. It’s clear ya’ll are pretty broke.”

“Ain’t it just.” Belle shook her head. “Tell ya what. I’ve got a little apartment out back behind the café. I lived there when I was younger, back before I married and started a family. Over the years I’ve rented it out but it’s empty now. It’s not much but it’s furnished and clean. You can stay there until you get on your feet. How’s that sound?”