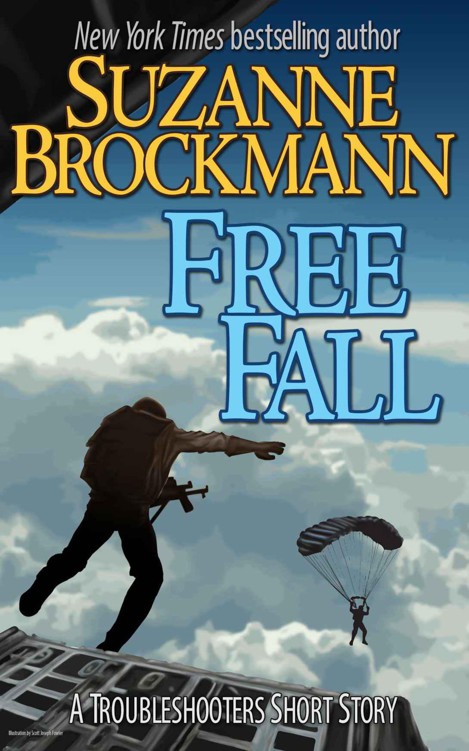 An exclusive short story featuring characters from the Troubleshooters Universe

All Through the Night

Headed for Trouble
(Short story anthology, includes a timeline of the TS series)

Free Fall
is a work of fiction. Names, places, and incidents either are products of the author’s imagination or are used fictitiously.

Timeline: This Troubleshooters story takes place in early January 2010, about eight months after the end of
Breaking the Rules
, and several weeks before
Home Fire Inferno (Burn Baby Burn)
the TS short story included in
Way of the Warrior
benefit anthology (coming May 2015 in ebook and paperback from Sourcebooks, with all proceeds going to The Wounded Warrior Project.)

Shit
was right. The force of their chutes opening was intense—they were all gonna feel it for days—and Tony V wasn’t the only SEAL giving voice to his pain. Izzy chimed in with a little inadvertent
Holy what the fuck
falsetto descant of his own, even as Markie-Mark Jenkins gave forth with a sternly worded reprimand to his sweet baby Jesus. Meanwhile, the FNG, Ferd McTurd—not his real name, but it would do until the youngster had earned the team’s respect—laughed his crazy ass off.

“Let’s at least
try
to pretend it’s the dead of night,” their LT and CO “Big Mac” MacInnough said mildly.

It seemed pretty pointless to play at stealth when the sun was shining with all its might. Still, it wasn’t all
that
hard to shut-the-fuck-up, considering the awe-inspiring splendor of the scenery.

Up here, the world was a pretty freaking beautiful place.

The sky was crystal clear over the desert, but not too many miles away, well before the curving horizon, there was a full array of picture-perfect clouds stretching as far as the eye could see. And up here, Izzy could see pretty freaking far.

Beneath him, his fellow SEALs’ open parachutes stacked in formation, one atop the other. Mark Jenkins had jumped first and was on point, with Tony V just after him, then Jay Lopez—the chief, gonna take some time to get used to
that
—then young Ferd, then Big Mac, then Izzy’s SEAL-in-law Danny Gillman, then finally Izzy himself, last out of the plane and still at the highest altitude.

Of course, they were currently
all
at such a high fricking altitude, the few hundred feet between them didn’t mean squat.

This was a HAHO jump—high altitude, high opening. They’d hopped out of a rather swiftly moving aircraft and within seconds popped open their chutes. The force of doing that was always teeth jarring.

Long before Ferd had joined the team, when Izzy himself was the Fuckin’ New Guy—just a wee tadpole fresh out of BUD/S—he’d heard a story about a SEAL who’d dislocated his jaw on a HAHO when his lines got tangled.
That
had to have sucked—dude had had to cut away
and
slam his own jaw back into place to be able to talk so he could tell his teammates WTF. Happily, the gentleman had survived. SEALs were good at that—in fact, honing their survival skillz was one of the reasons they regularly did training exercises like this one.

And that initial brain-shaking jolt was usually the worst of a HAHO. After that, it was all slow and peaceful and gentle, a seventy- to eighty-minute ride, just gliding silently down from thirty thousand feet to the waiting earth below.

Assuming, of course, that enemy troops weren’t also waiting for them to come within deadly rifle range. Which was why HAHOs were usually done in the dead of night at oh-dark-thirty, when the SEALs and their chutes would be invisible as well as silent.

Today’s training op had been originally scheduled to include the covering pitch of black, but their flight had been delayed, and then delayed some more. LT MacInnough eventually had decided to jump despite the fact that the sun was already up. Izzy wasn’t sure if that was because the BigMacster loved jumping or hated it.

Either way, here they were, flying through the bright blue morning sky.

It was funny how the words to the old Mary Poppins song always came into Izzy’s head whenever he HAHOed. In truth, the air up here at thirty-K feet was
so
clear, i.e. thin, that the SEALs needed oxygen to survive. They not only pre-breathed pure O2 for thirty minutes while up in the plane, but they jumped with masks and tanks in place.

The math that went into a jump like this was intense. The team leaders and aerospace physiology techs didn’t merely calculate the altitude and timing for when to jump and when to deploy chutes. Numbers were also needed to make sure the team had enough oxygen to keep them breathing until they got down to a thicker part of the at! Mosphere!

But the techs also weighed each SEAL and each necessary piece of equipment that the SEALs would be strapping to their backs, and they distributed said necessary equipment among each team member so that they would all weigh close to the same amount. This was done so that they all floated to earth at the same precise rate. It meant that the smaller guys like Jenkins were carrying a shit-load, while the bigger guys like the LT—the nickname
Big Mac
had been given to him with exactly zero irony—jumped with barely more than phone, dive-watch, and weapon.

He sounded strange—a little slurred and whole lot of weak, like the SEAL was full-on drunk after forty-eight hours of chugging jello shots.

Except just before they’d boarded the plane for this training mission, Tony had been super-lucid while giving Markie Jenkins and Danny-Danny-bo-banny a glowing report about the extremely awesome trip he and his fiancé had made up north to Seattle for some hipster indie film festival. Even though it had rained the entire time, they’d been put up at some fancy B&B and treated like movie stars.

Lots of grilled wild halibut and sleeping late with the sound of the rain against the roof
. Tony had been out to his teammates for years now, so he didn’t hesitate to tell when they’d asked—thank God DADT was finally on the verge of ending—adding that seeing Adam’s latest film on the big screen was also pretty great, of course.

But here and now, as Izzy looked down, he saw that one of the canopies was meandering drunkenly off course, to the south. It was Tony. And Izzy knew instantly that his teammate was in some fucking serious trouble.

T’s oxygen access was malfunctioning—had to be—and up here pulling off his mask wouldn’t help. With their chutes deployed, it would take maybe twenty minutes—shit, maybe even more—to float down to an altitude where they could breathe without aid.

“Vlachic, cut away! Now!” Izzy said it at the same time that Chief Lopez did. MacInnough gave the exact same order.

“I’m going,” Izzy announced to both men, not waiting for the order before he veered sharply south so that he could cut away, too. Because he was at the top of the stack, it made sense for him to be the one to go. He’d have the best shot at helping Tony. He popped his chute free and released himself from the harness.

And just like that, Izzy was back to heady free fall, zooming past his teammates, with only his reserve chute—packed correctly, please Jenkins’s baby Jesus—to keep him from becoming a stain on the glaringly bright desert below.

In that instant, Izzy thought briefly of his wife, Eden—God, he loved her with his heart, with his soul, with every cell in his being—and of Tony’s partner, Adam, who was just as thoroughly cherished.

Then he focused only on Tony, praying his teammate would find the strength to cut himself away. And Izzy tucked in his arms and turned his body into a rocket that would allow him to reach the other SEAL before it was too late.

Izzy would have one and only one chance to grab Tony as he hurtled past.

When Ben Gillman punched Wade O’Keefe in the face, he heard an echo of his older sister Eden’s voice.

No drama, please, while Jenn and I are away.

Eden had said those very words to Ben yesterday, before getting into the cab that took her and their brother Danny’s wife to the San Diego airport. The two women were flying to San Francisco, and then driving up to Napa for a wedding shower for one of Jenn’s best friends. Eden went along because Jenn was pregnant and Danny couldn’t go with her. His SEAL team was in deploy-any-minute mode.

Sixteen-year-old Ben had only been living in southern California with his brother and Jenn,
and
with his sister Eden and
her
Navy SEAL husband, Izzy—bouncing between their two equally awesome apartments—for just over seven months, but even in that short amount of time, he’d learned that deploy-any-minute mode
also
meant dialing back the drama to a negative five.

But here in the high school corridor, the drama-knob had been cranked to a hot eleven. The world had gone into a kind of weird slow-mo, with Wade staggering backwards as blood erupted out of his nose—an apt visual to the sharp explosion of pain in Ben’s hand.

Holy crap, punching someone in the face hurt!

It was entirely possible Ben had broken his hand.

Wade hit the lockers with a rattling bang as two of the three kids he’d been torturing skittered away, booking it down the hall. Ironically, it was the smallest of the three, Ryan Spencer, who stayed. Ryan now shifted his weight back and forth as he attempted to stand shoulder to shoulder with Ben. He even put up his dukes like an old-school boxer—assuming boxing had an “elf” weight.

The kid was adorable with his sweet face and big blue eyes behind vaguely Harry Potteresque glasses. Fucking Wade had been targeting Ryan for weeks with all kinds of asshole-ish behavior—from name-calling and taunting slurs to knocking into him in the hall.

Today’s assault was one of full-on intimidation, with Wade blocking the exit to the boy’s bathroom—keeping Ryan and his friends from leaving and getting to class on time. Ben had rounded the corner and seen the upperclassman’s aggressive body language along with Ryan’s stiff shoulders and courageously lifted chin, and something in him had snapped.

No one hassled Ben like that anymore—at least not here at his new high school. Sure, he still got whispers and stares—but that could be for any number of things. He was the new kid, he was diabetic, plus ever since he’d gotten his hair cut he was a ginger again,
and
he frequently got dropped off in the morning by a variety of camo-clad Navy SEALs. So the murmurs and looks weren’t necessarily because he was gay. But some of them probably were—the world also being home to people who still clung desperately to ignorance and fear, like Wade O’Keefe, asshole jock.