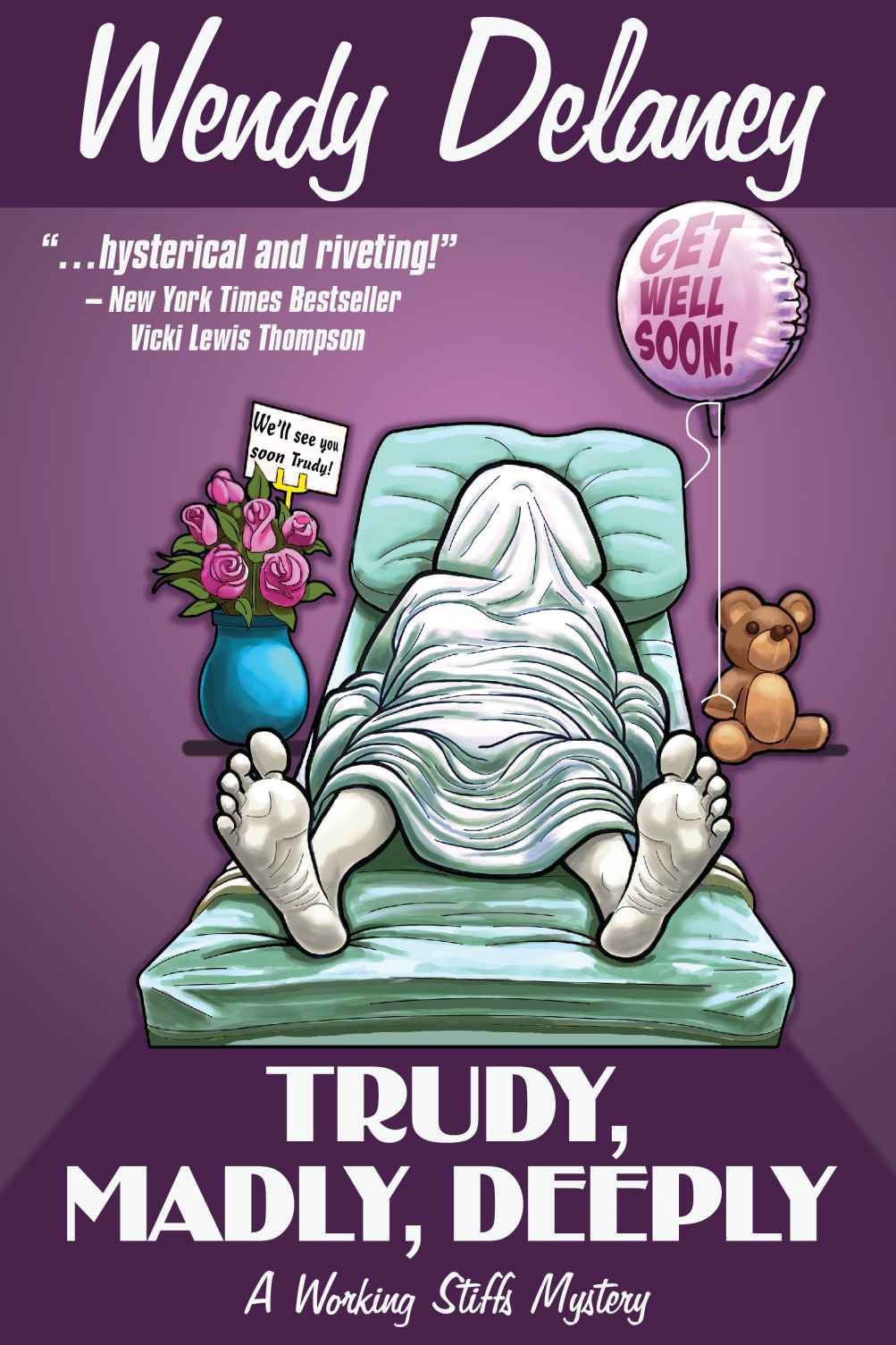 Other Works from Corvallis Press

If you’re anything like me, you have a favorite television show. Whether it informs, entertains, or is that scintillating hour of escapism that makes us race for our television remote controls so that we don’t miss a single minute, for us that show is
must see TV
.

CBS’s
Sixty Minutes
has long been my hour of
must see TV,
but as an aspiring author I never expected one of its featured stories to hit me over the head with an idea for a mystery novel. That’s exactly what happened one Sunday night as I listened to the fascinating tale about a doctor in England who was killing his elderly patients, and while I sat, mesmerized and scribbling notes as fast as I could, the synapses in my brain started firing off “what ifs.”

What if
there were a retirement Mecca near Seattle where I live, and a respected doctor was suspected of killing one of his patients?

What if
the discovery of that homicide were just the tip of the iceberg?

What if
that doctor wasn’t the murderer? Then, whodunit?

What if
the sleuth of my mystery novel wasn’t trained to be a crime fighting professional but had a curious nature and a unique ability to make her an asset to the County Coroner?

Almost immediately after I posed that last question to the universe, I read about a woman who was a
Truth Wizard
—a natural born human lie detector.

But I didn’t want just one story, especially when I had so much fun writing this book. I wanted a series of stories featuring Charmaine Digby, my sleuth with the eyes for lies and a nose for trouble. That’s when the Working Stiffs Mystery Series was born.

I thank Corvallis Press for saying “Yes!” to this cozy mystery author so that I can now bring the first of my Working Stiffs Mysteries to you.

Without further ado, I invite you to turn the page and join me in picturesque Port Merritt, home to Charmaine Digby and a cast of characters I hope you’ll come to love as much as I do.

To Jeff, my partner and soul mate.

My life of crime began at seven twenty-eight this morning.

Nothing hard-core. But judging from the steely-eyed gaze Chimacam County Prosecutor, Francine “Frankie” Rickard, was leveling at me, I knew some hard time could be in my immediate future.

“What the hell are you doing?” she asked as I entered her third floor office in the stately courthouse overlooking the Port Merritt waterfront.

She’d asked the question du jour—what I’d been asking myself ever since I hijacked her Friday morning doughnut order.

I’d been a good girl, never before prone to vigilante acts against pastry. But after a year without a regular paycheck, I was done with playing it safe.

I needed to make the most of this golden opportunity for some one-on-one time with my potential employer, so I shot Frankie my best smile and set the Duke’s Cafe bakery box on the corner of her oak desk. “Special delivery!”

Leaning back in her desk chair, she squinted at me over her wireframe bifocals. “Duke has you making deliveries now?” she asked, a wary glint in her slate-blue eyes.

In the last two decades, the population of the former mill boom town of Port Merritt, Washington, had dwindled to a tight-knit community of just over five thousand. Like Frankie, most everyone who frequented the waterfront was well-acquainted with my great-uncle,
the Duke
—Darrell Duquette, owner of Duke’s Cafe, the best breakfast and burger joint in town.

The fact that Duke had me around this summer for cheap, temporary labor was supposed to be working in this delivery girl’s favor. Instead, I felt like I’d been caught with a sticky-fingered hand in the tip jar.

“Deliveries, waiting tables. I’m just filling in wherever I’m needed until I can find something full-time,” I said, hoping she’d take the bait I was dangling in front of her.

Despite the August sunshine filtering through the arched window behind her, haloing her upswept auburn-gray hair, sixty-year-old Frankie didn’t look the least bit angelic as she folded her thin arms against the pleats of her cranberry-red jacket. “Well, I have to admit I’m disappointed, Charmaine. Since I could use someone with your … ability in this office, I’d hoped to entice you to work for me.”

My ability had earned me a local reputation that had been following me around like a chain-rattling ghost ever since Heather Beckett labeled me as a freak back in sixth grade. If it could also pay off in the form of a steady salary, I wasn’t too proud to do a little rattling of my own.

“You did. I submitted an application for the open position you told me about last week,” I said, trying to ignore the telltale quirk of irritation pulling at Frankie’s lips.

After completing the online application process, I’d spent the next ten days jumping at every ring of my cell phone like I was once again a teenager in need of a prom date. Much like seventeen years earlier, when Frankie called to ask me to babysit that Saturday night, my phone had rung just once about a job.

The offer had come from an old classmate who managed the Roadkill Grill, home of the You kill it—We grill it t-shirt that all the line cooks wore.

“Free t-shirts!” he said as if this were a coveted job perk that every thirty-four-year-old woman should have her sights set on.

Seriously, if I’m ever that desperate to save money on my wardrobe, I want someone to shoot me.

I met Frankie’s gaze, my heart pounding with anticipation. “But since I never heard anything back about the job …”

She puckered, accentuating the fine lines surrounding her frosted strawberry lips. “No one called you for an interview?”

Frankie pushed back from her desk, rising to a height almost eye level to my five foot six with the aid of the two-inch heels on her taupe pumps. “Come with me.”

I followed her past the cluttered desks of two watchful assistants clicking on computer keyboards to a smaller office four doors down a threadbare hallway, where Ben Santiago sat in front of a laptop dwarfed by his massive mahogany desk.

“Ben,” Frankie said as she and I stood in the doorway. “May we interrupt you?”

It was obvious from the cordial smile that didn’t reach his hooded walnut brown eyes that the Deputy Criminal Prosecuting Attorney thought we already had.

Ben Santiago’s gaze tightened when it landed on me, making me regret opting for the ponytail instead of taking an extra ten minutes with my blow dryer to tame my raggedy brown mop of curls. At least my white chambray shirt was clean. If you didn’t count the smear of egg yolk on my right sleeve.

He removed his horn-rimmed glasses and pointed with them at the two black leather captain’s chairs facing his desk. “Please.”

The leather chairs appeared to be cheap and utilitarian, like they’d been ordered out of a discount office supply catalog along with the bank of black file cabinets to his right. Aside from the red tones in his desk, the worn rust-brown carpet, and the windowless eggshell-white wall featuring two sepia-tinted street scenes of Port Merritt in its late nineteenth century heyday, the monochrome office looked as warm and inviting as a loaf of five-day-old white bread.

Frankie sat in the chair to my left. “Have you met Charmaine Digby?”

Standing a couple of inches taller than me, he reached across his desk and shook my hand with a firm, warm grip, projecting professionalism blended with a dollop of guarded disinterest. “Not officially.”

I’d served this guy lunch at Duke’s at least a dozen times in the last couple of months while I filled in for one of the waitresses on maternity leave. He took his coffee black, preferred ranch dressing with his fries, and wanted his double beef bacon cheeseburgers served without a side order of conversation, so I wasn’t surprised to hear I hadn’t made the grade of official acquaintance.

“Charmaine is interested in the level one assistant position we have open,” Frankie said.

Especially since it was the only employment nibble I’d had in the last nine weeks that didn’t require me to have Rocky Raccoon roadkill stretched over my C-cups.

Unfortunately, although Ben Santiago smiled and nodded, the crinkle of annoyance etched between his thick eyebrows suggested that I should ring my buddy to give him my shirt size.

“She’s the one I was telling you about, but it appears she was never called for an interview.” Frankie dismissively flicked a wrist. “Probably because of some clerical error.”

Ben’s mouth flatlined for a fraction of a second.

Clerical error, my ass. Clearly, some barrel-chested prosecuting attorney with a receding hairline had played a part in that error.

“Since you’ve been conducting the interviews, I thought you could take this opportunity to chat with her,” Frankie stated, making it abundantly apparent that an answer of no wasn’t advisable.

“Sure. I’d be happy to.” Ben sounded as enthusiastic as my then-husband the last time I suggested we head up to the Pacific Northwest and spend the holidays with my grandmother.

“I’ll sit in on this if you don’t mind.” Frankie smiled, folding her arms and sending her deputy prosecutor the none-too-subtle message that she didn’t care what he thought. “Just to expedite the process.”

With the tug of displeasure at the edge of his tan lips betraying his emotion like a tell in a poker game, Ben turned his attention to me, his pinstriped tie rising and falling with each deep breath he took.

“Charmaine, I’m sure you’re busy and need to get back to work, so what do you say we get right to it?”

Obviously, Frankie wasn’t the only one who wanted to do some expediting.

“Since I haven’t seen your resume ….” He glanced at Frankie like he wanted to convince her of that fact, making it ring less true. “Tell me about your work history, Charmaine, aside from being a waitress.”

Sidney Chambers and the Perils of the Night by James Runcie
The Girls' Guide to Love and Supper Clubs by Dana Bate
Marrying the Marine-epub by Sabrina McAfee
Vigo's Lament: A Dystopian Thriller (Age of End Book 3) by Chris Yee
The Private Wound by Nicholas Blake
Logan's Redemption by Cara Marsi
The Bluestocking and the Rake (The Regency Gentlemen Series) by Darcy, Norma
Off the Grid by C. J. Box
King for a Day by Mimi Jean Pamfiloff
Seat Of The Soul by Gary Zukav