Trusting A Sheikh (Playgrounds of Power 1) 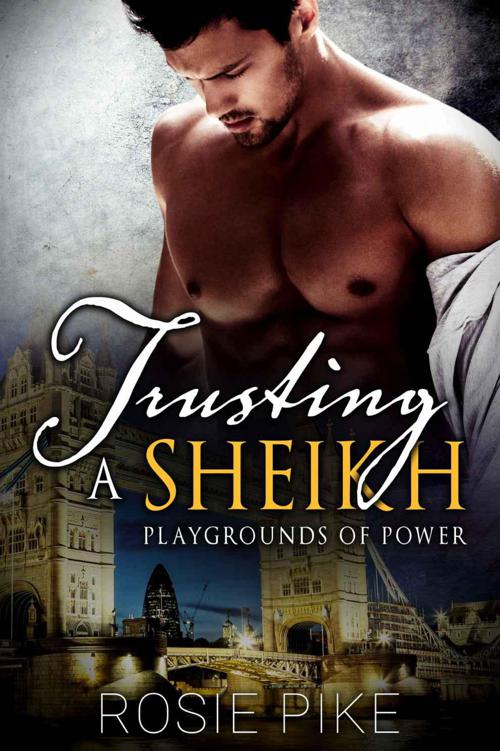 Playgrounds of Power, Book I

This is a work of fiction. Names, characters, businesses, places, events and incidents are either the products of the author’s imagination or used in a fictitious manner. Any resemblance to actual persons, living or dead, or actual events is purely coincidental

For free books, giveaways and to stay updated with my latest releases, please join my mailing list by clicking here or visiting www.RosiePike.com.

"
R
oyal Flight Two, you're cleared for takeoff. Your escort will join you about twenty miles from Riyadh and take you to the border. Fly safe. Tower out."

"Thanks Tower," Captain Ahmed Al Mansoor replied, thumbing the switch that activated his helmet microphone. "Glad to have the company. See you in a couple of weeks. Royal Two, out."

"Why are they sending an escort?" the junior co-pilot sitting to his left asked, a little confused. "What's the point in that?"

"Yeah, but what does that have to do with anything?" the younger man asked a little defensively.

The experienced captain raised his palms slightly to signify that he wasn't mocking the rookie. "Hey, don't bite my head off. Rough day? What's your name, anyway?"

"Sorry, sir,” the co-pilot allowed, "it's Youssef. I wasn't supposed to be on this mission at all, the other guy got sick – my wife is going to be furious if I'm away for two weeks…"

"There are worse places to be stuck for two weeks than London, let me tell you that. Anyway, I wouldn't call what we're doing here a mission… It's more like babysitting. Anyway, do you know who we've got back there?"

Youssef shook his head. "They didn't tell me anything, just woke me up and sent me out here."

Ahmed pulled back on the throttle, sending an increased flow of fuel to the four massive Rolls-Royce jet engines that sat, sparkling, on the wings of the green and gold liveried Royal Saudi Air Force 747 he was piloting. "We've got the pleasure of flying the Defense Minister's son to England today. That's why we're getting the escort."

"What?" Youssef snorted. "That's a waste of money if I've ever heard of one."

Ahmed raised an eyebrow and looked over at the young man. He was clearly not long out of the Academy – still arrogant, cocky and slightly too sure of himself.

"I'd be careful how loudly you say things like that, son," Ahmed said, a paternal smile on his face. "That kind of thing gets to the wrong ears, you're looking at flying refueling tankers for the next thirty years. That where you want to end up?"

The young man bristled at the statement, and Ahmed sighed inside. He'd seen it all before – young kids who thought they knew everything, but it was as annoying every time.

"Is that how you ended up flying this old bucket?" Youssef said slyly.

Ahmed was increasingly getting the urge to slap the young man, but restrained himself. He released the brakes, and all around them the roar from the engines reached a crescendo and the plane leaped forward like a sprinter out of the blocks. First, twenty knots, then forty, then a hundred, then they were airborne, the asphalt of the runway underneath them falling away, and before long, Riyadh itself was nothing more than a glittering island of sun reflected off the towering glass skyscrapers amongst a vast sea of sand.

"Have a little respect for your superiors,
son
," Ahmed said with an edge to his voice. He was usually an affable man, and he'd tried to be nice, but he had to sit in the same cockpit as this rookie for the next eight hours, and he'd had enough of the sound of his voice. "Have you any idea what my day job is?"

"I'm Wing Commander of the 17th Fighter Squadron, based out of King Abdullah AFB. You think I got stuck with this gig?" he added, adding a little bite to prick the arrogant kid's ego a little bit. Youssef wouldn't have been allowed onto a plane flying a member of the Royal family if he wasn't a good pilot, but he clearly needed to be taken down a peg or two.

Judging by the look on his face, Youssef knew he'd messed up. Internally, Ahmed was struggling to contain a smile, but he kept a straight face to prolong the rookie's agony. Every single pilot came out of the Academy the same – months of training on high-speed fighter jets has a way of boosting a man's ego almost to the point of being insufferable, and frequently beyond.

"No, sir, I don't," Youssef replied shamefacedly. "I apologize."

"Royal Two, this is Red Wing, we've just formed up on your starboard wing and we'll take you to the border. Over."

"Malik, is that you? Over." Ahmed spoke back into his helmet mic with a smile on his face, breaking normal military discipline – after all, Malik was one of his own pilots.

"You got it, boss. Packed your bags for your holiday in London?" Malik replied in English, the international language of aviation – and over the general cockpit channel, meaning as Ahmed had intended, that Youssef could hear every word.

"Technically, pilot, I'm on detachment for this mission." Ahmed grinned. "But I hear the bars are packed this time of year… Over."

As the F-16s formed up in a formation around them, Ahmed turned back to his young co-pilot, who was now regretting ever having opened his mouth. "Don't worry about it, son. But if you ever think you're going to get promoted, I'd learn when to shut up."

"Yes, sir," Yousef replied looking determinedly forward, his back as ramrod straight a new cadet. Ahmed smirked. He was going to make this a long flight…

T
HE CAPTAIN'S
voice rang out clear as crystal over the passenger cabin sound system – a sound system that was so far removed from the one found on typical Boeing aircraft that it was essentially unrecognizable.

"This is your Captain speaking. We're currently leaving Saudi airspace, and if you look to your right, you'll see our escorts peeling away. We're on course to land at London's Heathrow Airport in just under eight hours."

Of the four men sitting in the ornate passenger cabin, only Tariq bothered to look out upon the horizon and see the magnificent sight of two Royal Saudi Air Force fighter jets streaking through the afternoon sky on their way back to base.

"Thank fuck for that," exclaimed a tall, thin man dressed in the elaborate military uniform of the Saudi Interior Ministry, his shoulders bearing the two stars and a crown in gold thread that indicated his rank of colonel. "Someone call the stewardesses, I need a drink. Tariq? Tariq!"

"Did I miss something?" Tariq said absentmindedly. "Did you say something Khalid?"

Sin at Sea by Emma Nichols
The Knowledge Stone by Jack McGinnigle
Jacquie D'Alessandro - [Regency Historical 04] by Not Quite A Gentleman
The Honorable Marksley by Sherry Lynn Ferguson
Force Me - Death By Sex by Karland, Marteeka, Azod, Shara
My First Seven Years (Plus a Few More) by Dario Fo
Showdown at Dead End Canyon by Robert Vaughan
The Mirror Prince by Malan, Violette
The Mammoth Book of Roman Whodunnits by Mike Ashley (ed)
16 Things I Thought Were True by Janet Gurtler