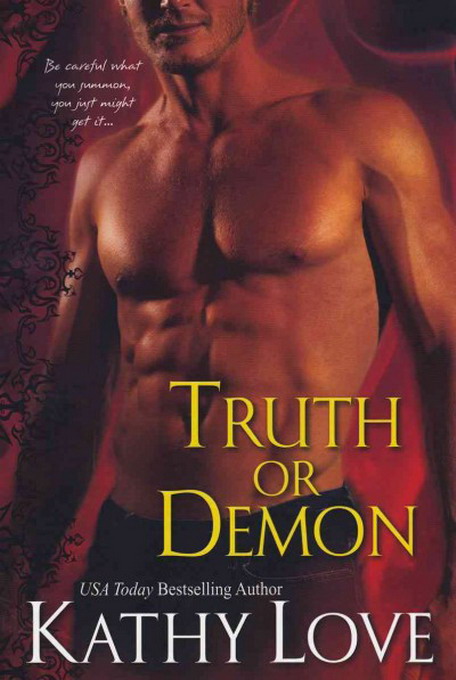 BRAVA BOOKS are published by

All Kensington titles, imprints, and distributed lines are available at special quantity discounts for bulk purchases for sales promotion, premiums, fund-raising, educational, or institutional use.

I want to thank my new editor, Alicia Condon. Thank you for making this transition so easy and so positive. I’m thrilled to be working with you.

Thanks to my wonderful agent, Amy Moore-Benson. I’m excited about the future now. Thank you.

Thanks to Beth Ciotta for introducing me to the fabulous Amy. I love you, girl!

Thank you to the Tarts—otherwise known as Kate Dolan, Christie Kelley, Janet Mullany, and Kate Poole. Love you, ladies.

And thanks to my family—especially, Mom and Dad. You help me
so
much. Love you.

Oh wait—And of course, to my Emily. I love you, Boo!

As a demon from the First Circle of Hell, he’d heard plenty of them. Screams of terror. Screams of agony. Even screams of ecstasy.

But he’d never heard screams like this. Really, it was more like squealing. High pitched, nearly deafening, like a sound that should only register in a dog’s hearing range. But unfortunately,
he
could hear the piercing sounds, and he could hear they were tinged with something. Some emotion. Almost … delighted horror.

He blinked again, disoriented. He had just walked into the darkness of his dwelling. Tired from a day of hard work. Escorting damned souls to their appropriate places in Hell wasn’t easy. Just the pleading alone got to him, never mind the ones who thought they were going to make a break for it. Where did these pitiful souls think they were going anyway? There wasn’t any escape. They were in Hell—that was tighter lockdown than Alcatraz times five.

He’d just gotten home, had poured himself a drink and was heading to sit down and relax, when
bang!
There’d been a blinding flash and a dizzying whirl and now he was …

He blinked again, his eyes finally coming into focus, and he realized he was in a living room. A living room that wasn’t his, and he was surrounded by … young girls.

He frowned. Was this some trick? Demons did have warped senses of humor.

“Who the hell are you?” he demanded.

His question was answered by more squeals and a hailstorm of flying popcorn and … red candies shaped like fish?

Well, yeah, he was real.

“It worked,” another said. She didn’t look as frightened as the other two. In fact, her dark eyes flashed with excitement, and a bemused smile curved her lips, revealing a row of silver braces.

“This isn’t good,” the third girl said. She was armed with more popcorn, ready to attack if he made any abrupt moves.

“Who are you?” he asked, then winced as more popcorn hit him in the face. Apparently she considered talking as attack worthy as a sudden movement.

“Who are
you?”
It was the one with no fear in her eyes who asked. She actually stepped forward.

He noted, out the corner of his eye, the others had renewed their ammunition. Pretty brave, he had to admit. Or foolhardy.

But Killian didn’t get to finish his sentence, or find out what the hell was going on. For the second time that day, a blinding flash blocked out his vision. But this time it was accompanied by a sharp pain to the back of his head. Then everything went black.

Poppy stared down at the crumpled body of the man now unconscious on her mother’s Persian carpet. There was another thud, and she realized she’d dropped the silver candlestick holder she’d been gripping. Another heirloom from her parents.

“Are you—” She had to pause, struggling for air. Fear stole her breath. Oh, my God, who was this man and what had he intended to do to the girls? Awful thoughts raced through her head like a vivid horror-movie trailer.

“Are you okay?” she finally managed.

The girls all nodded in unison, their gazes on the prone body in front of them.

Poppy gathered herself further to step around the downed man and usher the girls away from him. She considered taking them to the kitchen, where she could call the police, but then changed her mind. Better to leave the apartment altogether.

“Hurry,” she whispered, herding them ahead of her, glancing back at the man to make sure he was still down.

They’d reached the door when the girls seemed to snap out of their daze and start talking all at once.

“We can’t just leave him,” her sister, Daisy, said.

“He could be dead,” Madison said, looking as distressed as Daisy.

“You can’t kill a demon, can you?” Emma asked, cocking her head to the side as if considering her question. Then she shot the other two girls a pained look as if she realized she’d just said something stupid.

“Demon?” Poppy asked, shaking her head, positive the girls were in shock after all. “What are you talking about? Demon? He’s just a man. A strange man who broke into our apartment. So let’s get out of here.”

She tugged on the doorknob. The door was locked. She went still. The dead bolt was locked too.

How did the guy get in here? They lived on the fourth floor, and the only other way inside was the fire escape, which was outside her bedroom window. He hadn’t come in that way—she would have heard the warped old window scraping open. So how …?

“Did you let him in?” she asked as she turned to face her little sister and her friends.

Daisy made a face not unlike Emma’s just moments earlier.

“Kinda,” Poppy repeated. “How do you
kinda
let someone into our apartment?”

“I let him in,” Madison said quickly.

“What? Why?” Poppy asked, but the girl’s answer was interrupted by a groan from behind them.

All heads turned toward the sound.

“I’ve got to call the police,” Poppy said. She wanted answers from these girls, but right now that was the best course of action.

“No,” Daisy said, then to Poppy’s surprise walked back to the man. “You can’t do that.”

Poppy watched in amazement as Madison joined Daisy. Only Emma lingered with Poppy.

“Okay, explain why a stranger is in my apartment,” Poppy said. “Now.”

All the girls answered at once.

“And what if he’s really hurt?”

Poppy raised a hand, overwhelmed by the rush of remarks. She joined them and they stood in a circle, all staring at him.

There was a slight pause, then Daisy said, “He’s Madison’s cousin.”

Madison’s head snapped in Daisy’s direction and something passed wordlessly between them.

Then Madison looked at Poppy and nodded, her gray-blue eyes wide. “Yeah, he’s my cousin.”

“Really?” Poppy knew something here didn’t add up. But why would they let this guy in otherwise? Daisy and her friends had never been the type of kids to do dangerous or stupid things. Well Madison … maybe. But overall, even she was a good, sensible kid.

Poppy glanced at Emma, who stared down at the man like he was in fact a … what had she called him? A demon?

“He texted me,” Madison said slowly, but then picked up speed as she talked, “to let me know he was here and to get the keys to my place. You know, because Mom’s at work.”

Madison’s mother was divorced and a nurse. Poppy knew she was working night shifts this weekend, part of why Madison was spending the night with them. But it seemed strange Madison’s mother hadn’t mentioned a family member coming into town.

Poppy glanced from girl to girl. Daisy nodded in agreement with Madison’s story. Madison nodded too. And Emma looked from the man to Poppy, then back to the floor. She toed a candy gummy fish with her fluffy, rainbow-colored slipper.

The man groaned again and this time flipped over onto his back. Emma squealed, and all the girls jumped back. Including Poppy.

But after the initial movement, he fell motionless again, his eyes closed, his arms flung back above his head.

Poppy stepped closer, for the first time really seeing the man. He was quite amazingly handsome, even lying unconscious amid popcorn and candy. His hair was shaggy, with a slight unruly curl to the tips. In the lamplight, it shone somewhere between dark blond and chestnut. His lashes were several shades darker against his pronounced cheekbones. And his mouth was perfectly sculpted, with the upper lip bowed slightly and the lower one just a little fuller.