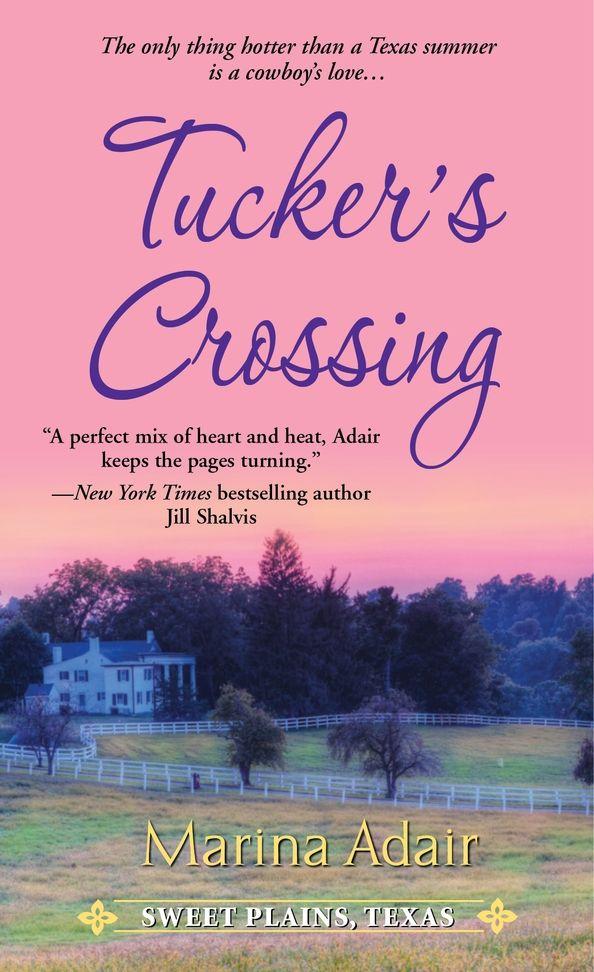 This could not be happening. Shelby had waited nine years, eleven months, and twenty-seven days for this moment. She had prepared a speech. Even practiced it once on one of the cows. But all of the words she might have said, had rehearsed in her mind, vanished. Out of the countless scenarios she’d mentally played out, never once in all that time had she imagined that her reunion with Cody Tucker would take place with her as naked as a centerfold, staring down the barrel of a .45.

She felt her skin flush from toes to cheeks, and up to her other cheeks. Reaching for her robe, she mentally planned her escape. If she was going to do this, she would damn well be dressed.

“Don’t even think about moving,” Cody said in that sexy drawl that sent all kinds of unwelcome sensations shooting through her body. He tipped the gun toward her robe, cocky as ever. “Not ’til you answer my question.”

Shelby swallowed back a frustrated scream and resisted the temptation to kick him. Was he serious? She might have been a yes-girl once upon a time, but she’d changed. She was here to settle the past and fight for her future, and that didn’t include being pushed around.

“Tough,” she said, acutely aware of her nude state. “I’m tired, got a gun pointed at me, and dripping water all over the rug. Just because you’re finally ready to talk doesn’t mean I’m going to stand here naked to let you do it. You hear me?”

“Oh, I hear . . .” His eyes traveled the entire length of her very exposed body, as if taking detailed notes of the changes since his exodus from her life. “And
see
you, perfectly.”

BOOK YOUR PLACE ON OUR WEBSITE AND MAKE THE READING CONNECTION!

We’ve created a customized website just for our very special readers, where you can get the inside scoop on everything that’s going on with Zebra, Pinnacle and Kensington books.

When you come online, you’ll have the exciting opportunity to:

• Send e-mail to your favorite authors

• Join us in weekly chats with authors, readers and other guests

To my mom. The day I got “the call,”
I picked up the phone and dialed,
only to remember that you weren’t there.
Miss you and hope I made you proud.

Thank you to my incredible agent, Jill Marsal, for never sugar-coating and pushing me to become a better writer. And a big thanks to Alicia Condon, the best editor a girl could hope for.

A special thanks to my critique partner, Jacee James, who has edited every single thing I have written along the way, including several boring term papers and a tragic set of sonnets. You’re next, K-girl! To Britt Bury, who made me feel like a rock star even when I was just a mommy flashing my pages to anyone willing to look, thank you for your endless nights of edits and never-ending support. To my coven of writers: Elisabeth Barrett, Jules Bernard, Britt Bury, Lori Charles, Andrea Gruidl, Sharron Hamilton, Hannah Jayne, and Alison McKee—next round is on me.

To my beta readers and friends, thank you for your honest feedback and willingness to read my work, even the ones that didn’t sell: Kamryn Clarke, Jenn Dean, Emily Grube, Barbara Halliday, Meredith Johnson, Victoria Krupitskaya, Tina Nguyen, Gina Paulson, Jann Rigell, Anne Seales, Hazel Sigler—and in memory of Justine Alesna; without your words and smile the world lost some of its sparkle.

This book would not exist in its current state without my dear friend, fabulous mentor, and fellow
Heart Of Dixie
fanatic, Hannah Jayne. Not only did you turn me onto trash television (i.e.,
Dance Moms
and
PLL
), you never doubted what
Tucker’s
could become, even pitching it when I was too scared—your 15% is on its way.

A very special thanks to my daughter, Thuy, for smiling every time I ask if mac-n-cheese is okay for dinner. And finally, to my husband, Rocco, thank you for loving me even when I didn’t have the courage to love myself. You are my strength, my best friend, and the best part of my life. I love you.

“I could sue you for breach of contract.”

“There was never a contract,” Shelby Lynn Harris countered, knowing her good friend was just blowing smoke. “I said I’d think about it.”

“You said thanks for the generous offer to use my apartment and then went on and on about what a great friend I am,” Gina Echols argued, sinking into an enormous bite of her Blue Burger, the house specialty.

The Bluebonnet Burger, Bar & Biscuit, known as The B-Cubed by locals, was still relatively quiet. It was eleven fifteen, too early for lunchers and not early enough for the hangover crowd. Which, considering the forthcoming topic of conversation and the town’s incessant penchant for prattle, made her relax a little.

Every Wednesday when Shelby’s shift at the clinic ended, Gina insisted they meet here, in the all-in-one saloon, with its hull-covered floors, bar-top tables, and always-past-midnight lighting, whose motto was “Come for the burgers and beer, you’ll still be here come biscuits.” Gina claimed it was because the dive sat a block down from her office in the county courthouse, but Shelby knew better.

“Yeah, the thanks was in regard to the offer, not me accepting it.”

“It was a verbal agreement. It would hold up in court.”

Gina had offered up her condo in Austin and Shelby had seriously considered it, but in the end decided that there was no way she was leaving. Located an hour north of Austin, and with a population of nine thousand, Sweet Plains was large enough to support its own courthouse, kids’ football league, and medical clinic, but small enough to feel safe.

Shelby had lived in more than her share of towns in her thirty-one years, but this one was her favorite. Folks called you by name and cared about your well-being. It was a town that had book clubs and Fourth of July parades and had somehow become her home. Even more important, she intended for it to stay that way.

“I’m guessing by the lack of makeup and the excess whine, Cody was a no-show?”

“That’s okay, so were his brothers. I thought for sure Cody would come home after the reading of his dad’s will.” Shelby shrugged. “So what now? Plan B, right?” She tensed, ready for Gina to rip into her because, they both knew, there was no plan B.

Gina had warned her that Cody wouldn’t come back and wasting time wishing otherwise was a lesson in insanity. But Shelby had, stupid as always when it came to him, waited, certain he would come home for his dad’s funeral and to do the right thing. But the time allotted in the will had come and, as of today, gone.

Now Shelby had to admit—Cody Tucker wasn’t coming back.

“This is where you tell me I was too stubborn and blew it.”

“Mouth’s too full,” Gina mumbled around the bits of burger stretching her cheeks.

“Maybe they’ll all just stay gone and there won’t be any problems.”

“Or instead of sitting here, week after week, stressing out and ruining my lunch, you could . . . gee, I don’t know, maybe mail him the contract.”

This time Gina wasn’t referring to alternative living arrangements; she was talking about the agreement that Silas, a year before he died, had insisted she have a lawyer draw up. Shelby had procrastinated and now the only Tucker who was on her side was dead. And the only Tucker who could help her had made it clear ten years ago that he never wanted to see her again.

“That’s why you have to put it out there. It’s the only way to put this all to rest and move on.”

“I doubt I could even find him.”

“I call bullshit!” Gina’s eyes narrowed, assessing Shelby like a witness on the stand, her voice as severe as her tightly coifed bun. And right then, Shelby understood how her sweet friend had become one of the most feared prosecutors in the great state of Texas. “The man is sitting pretty in Austin, with a small fortune, mind you. And you’re here. Hiding out and driving a diesel. All you have to do is say the word and I’ll have his ass subpoenaed. Problem solved.”