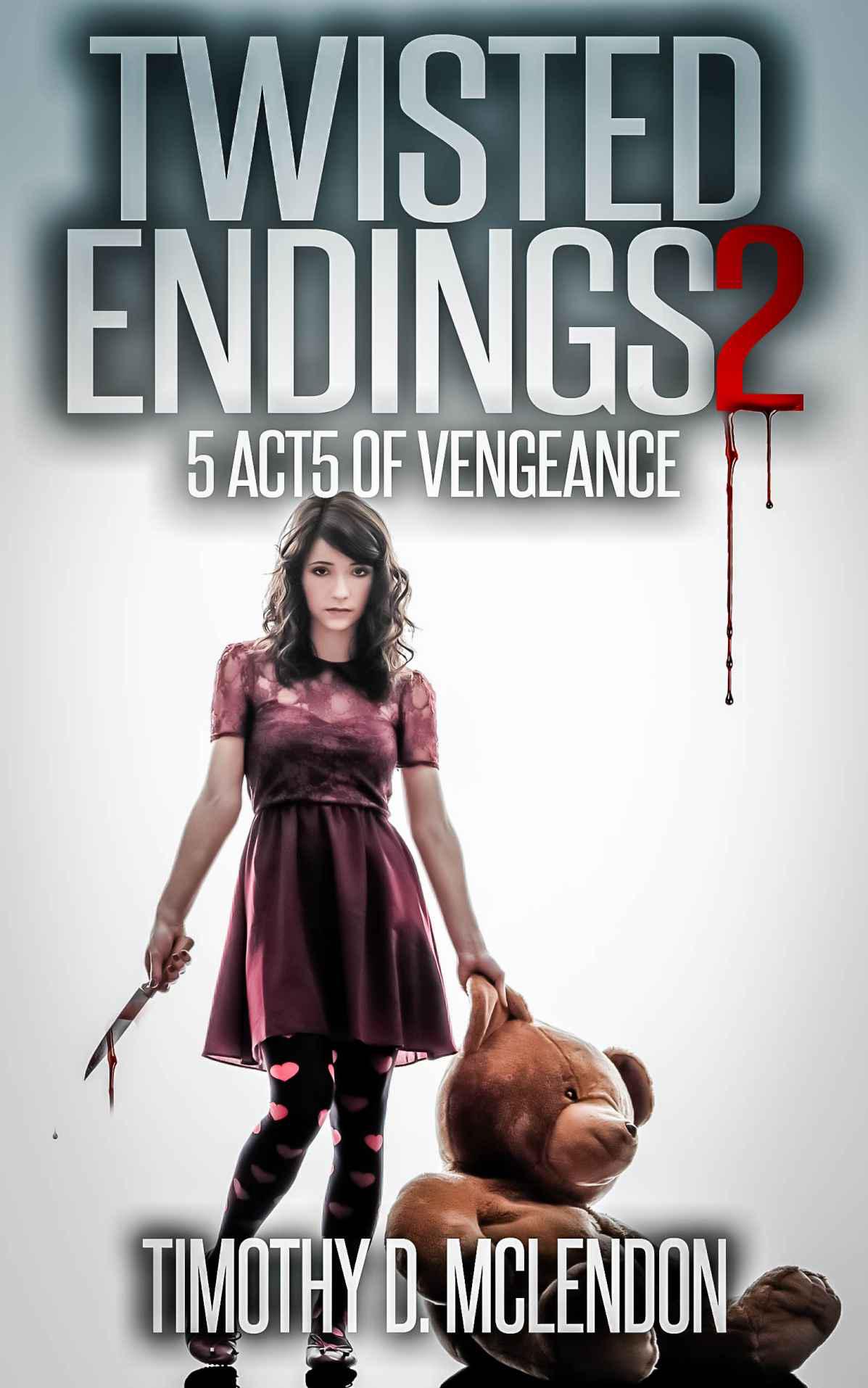 For my son Zander Blaze,

Life is full of mysteries. I’ll help you figure them out.

MARCUS STARED at the fresh blood stains on the bed sheets. He didn’t know how they got there, but he had his suspicions.

“Sasha,” he whispered. His wife groaned but refused to wake up. He gently shook her arm.

“What time is it?” Her eyes were still closed. Her curly, brunette hair hid half of her face. Her slender legs extended from a short, lacy negligee.

Sasha opened her eyes and sat up. “Did you get breakfast?”

She rubbed her eyes and sighed. “I’m sorry, babe. I’m just so tired.”

“Don’t worry about it.” Sasha had made him breakfast every day for the past six months. She stopped a few weeks ago. She said she was tired. He pointed to the blood on the sheets. “What is this?”

Sasha stared at the sheets. Sure, the spots were small, but it couldn’t be good. “Great. I think we have bedbugs.”

Marcus couldn’t take his eyes off of Sasha’s side of the bed. There wasn’t any blood there. He pointed to it.

She turned and looked behind her. “What?”

She looked at the sheets again. “Oh.” Her eyes shifted from side to side, the way they did whenever she lied. “Maybe it’s my blood type. I remember reading somewhere that bedbugs won’t touch some types of blood.”

“Maybe.” He didn’t have time for her lies. He headed for the bedroom door.

He stopped and shook his head. She knew he couldn’t stay. When he turned to tell her as much, he saw her negligee was drawn up her legs. She stared at him with her mouth half open.

“See you tonight,” he said.

He heard her jump out of the bed and rush up behind him.

“Marcus, please. You can’t keep doing this. You’re working 75 hours a week!” She wrapped her arms around him from behind. “I miss you. I never see you anymore.”

Marcus rubbed his temple. All of their bills were behind because he lost his last job in IT and it took four months to find his current position as a computer systems administrator. The rent. The car. The electric. Everything was behind. “I’m sorry, babe. Three more months of this, and we’ll be caught up.”

He looked at the dining room table, and saw she hadn’t made his lunch. He would have to go to the diner again. “Yeah. I’ll see you tonight.” He unlocked her arms and reached for the front doorknob.

“We need to see someone,” she said. Her voice was somber. “A counselor.”

Marcus turned and faced her. “We’re not going to see a counselor. The only thing that’s wrong with our marriage is you don’t do anything anymore!” He wished he hadn’t said that. But it was too late. He turned back to the door and opened it.

“Hello, Mr. Marcus,” said his neighbor across the apartment complex hall. It was Juan. His hair was slicked back and he wore an Armani suit. He was a pretty boy who had a new woman at his apartment every week.

“Juan,” Marcus said, nodding his head. “Have a nice day.”

“It’s a beautiful day and love is in the air.”

Marcus turned when Sasha brushed up against him.

Sasha put her hand up in a friendly wave to Juan and smiled at him. She stood partially behind Marcus now, revealing some of her lacy negligee.

“Hello, Ms. Sasha,” Juan said. “It’s always a pleasure to see such a beautiful woman. I hope Mr. Marcus is treating you right.” He winked at her.

Marcus leaned in close to her and whispered, “Get back inside. And cover yourself up.” He couldn’t believe she was exposing herself to this man.

She chuckled again as she went back into the apartment.

Marcus pulled the door closed. It looked like Juan’s eyes were following Sasha when she walked away. “Juan,” Marcus said, “if you go near my wife I’ll kill you.”

Marcus knew that was a lie. He had seen the librarian Mrs. Farber go into Juan’s place more than once. She never came out until the next morning. None of the women did. “Don’t play with me.”

Marcus walked to his car and headed to work. He wished he could rearrange pretty boy's face.

“I DON’T know what I’m going to do,” Marcus said to his coworker Jim. They were at the downtown diner for lunch. “My rent is due tomorrow. My car is about to be repossessed. And I don’t have any of the money.”

“I don’t know what to tell you,” Jim said from across the table. “I offered to loan you the money, but you’re too stubborn.”

Marcus shook his head. “That would be one more thing I wouldn’t be able to pay back. Thank you for the offer, but no.”

“Well, I think it’s your lucky day,” Jim said. His head was turned toward the cashier’s desk. He was staring at a sign. “They’re hiring for an overnight shift.”

The waitress stepped over and looked amused. “What can I get you boys?”

“Let me ask you something,” Jim said to her.

“My friend here,” he said, pointing to Marcus, “is only working 75 hours a week. I see that you’re hiring for an overnight shift. That’s perfect! Will you please hire him?” He redirected his attention to Marcus. “You’re already getting what? Five, six hours of sleep a night? There’s plenty of time for that when you’re dead.”

The waitress’s eyes grew wide as she smacked a wad a gum around her mouth. She looked at Marcus and said, “Don’t be foolish, baby. Live your life.”

“Come on,” Jim said, looking at the waitress’s nametag, “Rita. He lives four blocks from here. He could take the walk of shame here every night.”

“Don’t listen to him, baby” Rita said, looking at Marcus. “Besides,” she said, looking back at Jim with her hands on her hips, “that position was filled weeks ago. Fools around here haven’t taken the sign down.”

“Sorry buddy,” Jim said to Marcus. “There goes a lifetime dream of flipping burgers and hanging around sweethearts like Rita. I’m ready to order now.”

Rita rolled her eyes. “You’ll have a burger and fries. And you’ll like it.” She turned to Marcus. “What can I get you, baby?”

“I’ll have the lunch special, and an iced tea, please,” he said.

“Please?” Rita looked at Jim. “That’s how a real man talks.” She flipped her hair and walked back into the kitchen.

Marcus couldn’t help but ignore Jim. He had more important things to think about. “I don’t know what I’m going to do.”

“Yeah, you already said that,” Jim said. “You need, what? Four thousand dollars?

Jim leaned into the table. “I think I can help you. Do you still have that baseball bat? The one signed by Mantle and Dimaggio?”

“It’s gotta be worth, what? Three thousand, four thousand dollars?”

“Five thousand and five hundred.” Marcus knew where this was heading. At the Christmas party at his house last year, Jim had hovered over that bat.

Jim whistled. “That’s pricey. But, man, I would love to have that thing.”

“It’s not for sale.” Marcus’s dad had given him that bat when he was eight years old. His dad died the next year.

“Think about it. You’re killing yourself at work. It’s gotta be putting a strain on your marriage. You could end all of that. Start sleeping again like a normal human being.”

Marcus thought about it. He didn’t want to admit it but he knew Jim was right. That baseball bat was the ticket out of this mess. “How much will you give me for it?”

“Five thousand.” He wanted to get Sasha something nice. He had a lot of making up to do.

“I’ll have to move some things around,” Jim said, “but okay. If you bring me that bat tomorrow in mint condition, I’ll give you five thousand. No scratches. No dings.”

“Don’t worry. It’s in mint condition.” It hadn’t been touched by human hands in twenty years. It had always been in a protective display case.

Marcus jumped when Rita threw a plate with a hamburger on it in front of Jim.

“If you want any ketchup or mustard, there are some packets on the counter over there,” she said. She set a plate with today’s special and a glass of iced tea in front of Marcus. “Can I get you anything else, baby?”

Rita glared at him. Then she walked back into the kitchen.

Jim looked under the hamburger bun. There weren’t any condiments. “I’m telling you, she wants me.”

Marcus was tired of listening to Jim’s nonsense. He wanted to tell him as much, but he couldn’t piss off his buyer now.

“What’s going on with your arm?” Jim asked.

“Your arm, dude. You’ve got bites or something all over it.”

Marcus looked at his right arm and saw the bright red splotches for the first time. There were four of them just on his forearm. Sasha hadn’t lied after all. “Bedbugs.”

“Oh boy. I grew up with those blood suckers. They don’t care if you’re the President of the United States. They’re gonna bite your ass.”

“You’re wrong about that,” Marcus said. “They haven’t touched Sasha at all. Something about her blood type.”

Jim raised an eyebrow. “I grew up in the country with four brothers and sisters. We all had different blood types. I’m telling you, those monsters don’t care what your blood type is.”

“That’s not possible. There’s got to be a reason why they’re not attacking Sasha.”

Jim put a hand on his chin and leaned forward. “You’re working a lot of hours. I bet you’re exhausted. You probably go straight to bed when you get home. Then you get up and go straight back to work.”

“That pretty much sums up my life. What are you thinking?”

Jim looked away. “Nothing. It was just a silly thought. You know what? I think I will get some of that ketchup over there.”

Marcus shifted in his seat. He knew Jim was hiding something. “Tell me or you won’t get the bat.”

Jim cleared his throat. “I don’t think your wife is sleeping in your bed.”

MARCUS SAT in his apartment complex’s parking lot for more than ten minutes when he got home that night. He sipped on the energy drink he had picked up at the local pharmacy. It tasted like shit.

He had a plan. He would stay awake in bed, and wait until Sasha left. He had to see it with his own eyes. If Jim was right about Sasha sleeping somewhere else, then Marcus would sell his baseball bat to him in the morning, and leave Sasha high and dry. She wouldn’t be able to pay the rent and she didn’t have a car. Screw her.

“You’re just in time,” Sasha said when he walked into the apartment. “I made your favorite dinner!”