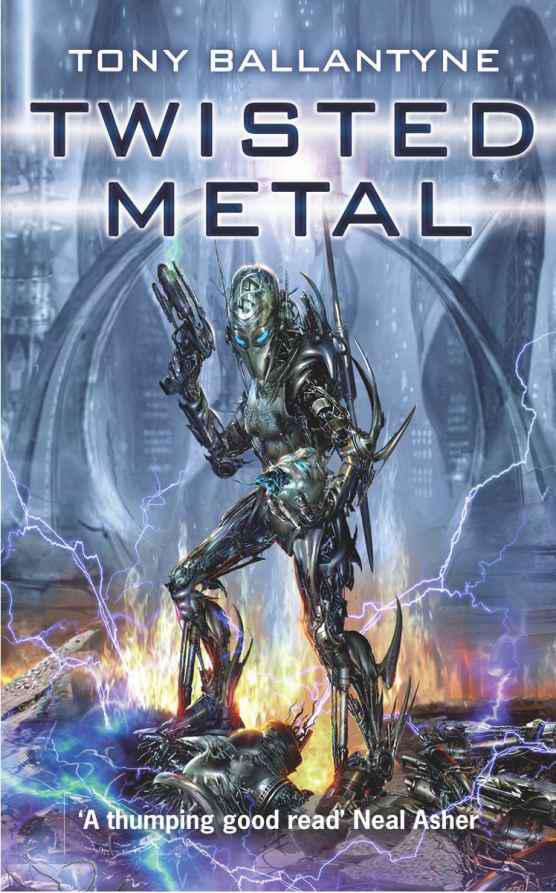 1. THE SOUTHERN COAST OF SHULL

6. THE EMPTY METAL SHELLS OF GHOSTS

8. SOME DENTS CAN’T BE HAMMERED OUT

10. STORIES TWISTED INTO THE METAL

12. THE NORTHERN COAST OF SHULL

The Stark robots were better engineered, faster, stronger, sleeker – but they were being overwhelmed by the sheer number of the enemy.

The grey Artemisian infantry marched out of the darkness of the plain, following the segmented pipes that snaked from the wells to the oil refinery.

The Stark robots fell back before them in good order. They dropped flat magnetic mines and kicked sand over them. The hidden traps stuck to the iron feet of the advancing troops, discharging a shock that contracted the electromuscles of the body, pulling it into a tight, agonizing ball before shorting the life from the victim in one convulsive burst.

Everything about the Stark robots suggested better materials and better minds. Each shot from their high-velocity rifles shattered an Artemisian head, blowing a mind apart in an explosion of blue wire.

But still the grey forces came on, marching ever forward in a seemingly unending stream, underpowered rifles pumping forth ineffectual lead slugs that spread across the steel plate of the defenders, slowing them down, reducing each movement to a painful struggle.

Inevitably, the grey robots fell upon the defenders. They pulled out knives and awls and began to beat at the Stark bodies, denting them, worrying at them, seeking a point of entry. The defenders struggled on under the unceasing attack, but eventually their armour was punctured. Awls and blades worked at the bodies, peeling back the plating, piercing through to the electromuscle beneath. The Stark robots died in an agony of cuts and feedback, while all around them the Artemisian forces marched on, eyes fixed on the refinery and its precious oil.

Other creatures joined the battlefield. The soldiers’ feet slipped and skidded on the metal shells of beetles that dug their way up from their burrows to steal the shards and swarf that dropped from the bodies of the downed.

A chatter of metal, the sound of a toothed blade tearing itself apart on a tungsten block, and a line of holes appeared in the grey metal bodies of the Artemisian infantry, running up and down the ranks. A Stark machine gun was firing upon them from a mile off. Falling bodies followed the line of holes, and the scavenger beetles swarmed over the newly dead. Still the Artemisian advance pressed on.

A hiss, and the air filled with a thin mist of water; it drifted through the grey ranks, a minor annoyance. Circuits felt mushy and sparky in the moist conditions.

Unnoticed at their feet, the soil churned as the beetles burrowed their way back beneath the ground.

The Artemis robots stumbled on, feet tripping on the potholed earth, metal bodies misting with water, droplets running down their arms and fingers, electromuscle singing with power, the sight of the refinery, empty and undefended, spurring them on.

And then they felt it, the sense of building power ahead; an enormous potential forming, it resonated in their bodies, set their electromuscle singing. The advance faltered, the robots behind still pushing into those in front. The leaders paused to gaze at the line of metal spikes thrust in the ground before them, each spike humming with ominous intent.

Something was coming. The grey bodies at the front held for a moment in desperate equilibrium, ready to retreat, knowing it was too late . . .

The power discharged. A near-solid bar of electricity hit the metal shell of a leading Artemisian soldier. Her mind exploded; the power within it was added to the lightning bolt that now spread crackling across the field of battle. Metal screamed and shuddered, twisted metal expanded and melted. A magnetic pulse spread out from the battlefield, across the continent of Shull; it rose up into the night and bounced off the ionosphere.

Silence settled over the battlefield, nothing was heard but the ping and crack of cooling metal. So many bodies, so many minds, so much twisted metal. All dead.

The soil began to stir again.

The beetles were returning.

Far away, halfway around the world, a robot monitoring the radio frequencies in distant Yukawa heard a crackle, a blast of white noise. It was the sound of so many souls departing the world, not that he recognized it as such
.

He scored his stylus across the metal, drawing the pictograms that represented an electrical storm somewhere over the western sea
.

Two robots were making love in the middle of an electrical storm.

Crouching in an old shell hole, searing white lightning arcing above them as the charged night sought release, Liza paused in the act of twisting wire and gazed up at her husband.

‘Is everything all right?’ Kurtz asked. The sky flared, and gravel tipped from the rim and rolled to the base of their shelter. It was a night of changes: far across the dark plain, Artemis was on the march; attacking the distant city state of Stark.

‘Are you worried by the fighting?’ pressed Kurtz. ‘Shall we go back to Turing City?’

‘No,’ she smiled at him. ‘Stark is a long way from here. What sort of a child would we make if we were to run at the slightest disturbance?’

His eyes glowed soft yellow, a gentle contrast to the raw power tearing the night apart above them.

As she spoke again, her voice crackled with the static of the storm. ‘I have reached the point. Have you decided?’

Liza nodded and returned to her work, her hands moving in the feminine manner as she wove a mind from the twisted wire that Kurtz made for her.

‘Thank you,’ said Kurtz, watching her movements with fascination.

‘Thank you for what?’

‘For giving me the choice.’

‘It’s tradition,’ Liza replied simply, her hands ever moving. ‘Thank you,’ she murmured.

‘For trusting me. For not asking if I am really weaving what you asked for.’

There was a sizzling crash, and several lightning bolts arced down, earthing themselves through crude plugs of raw iron that had thrust themselves up from the stone plain. Glowing plasma formed an arch in the sky, burning its way into the electrocells of Kurtz’s and Liza’s eyes.

‘That came from Stark,’ observed Kurtz, the purple lines of lightning slowly fading from their vision. ‘Their Tesla towers are too powerful. Artemis won’t defeat them tonight.’

‘It only means that they’ll attack again,’ said Kurtz despondently. ‘And they’ll keep attacking until they have defeated Stark, and then Segre, and then Bethe. And then it will be our turn.’

‘Yes,’ said Kurtz, and he relaxed, allowed his electromuscles to discharge a little.

Liza worked carefully on, twisting Kurtz’s wire into a mind. The little body that would house that mind lay at their feet. A smart little body, lovingly built by Kurtz out of steel and brass, the whole then painted in black and gold stripes by Liza. A beautiful little body, its skull gaping open, ready for the mind she was twisting to be inserted. It already had a name: Liza and Kurtz’s little boy would be called Karel. Karel. A lovely name for a lovely child, due to be born in the midst of less than lovely times.

Liza and Kurtz crouched together in an old shell hole, the remnant of a long-spent war, making their own little expression of peace while electric bolts fanned across the sky, painting themselves on the canvas provided by Zuse, the night moon. Meanwhile, a low rumbling spread across the stone plain. Artemis machinery being destroyed: they had attacked Stark too soon.

The rhythm of Liza’s movements had changed.

‘What are you weaving now?’ asked Kurtz.

‘No, I see your hands move and all I see is twisting. It has no order or meaning to me.’

Liza smiled. ‘Now I am giving him your stubbornness.’ Her hands danced lightly, tweaking, turning, teasing.

‘I’m not stubborn,’ he protested.

‘You’ll stand your ground, even when you suspect you’re wrong. You’d rather see a bad argument through to the end than change your opinion. It’s not your most attractive characteristic, but,’ she shrugged, ‘there are worse things to be ashamed of.’

‘But I don’t want my child to be stubborn. Take it out!’

‘The weave must balance.’

Kurtz said nothing, and Liza knew he understood. He would have seen children who walked and talked and performed simple tasks and nothing more, seen the way other mothers would look at them with sympathy or disapproval.
The mother tried too hard
, they would say.
The weave doesn’t balance
.

The electrical storm was rising in intensity: an incredible tearing sound ripping across the world. White light poured down from the sky to the east, a waterfall of light increasing in flux. A curtain of electricity was fast being drawn across the horizon, a flood of light that blasted the plain; the squat iron plugs firing ultra-black shadows westwards. The reddish stones kicked across the plain by the metal feet of so many robots drew long lines of darkness towards Turing City itself.

‘What is going on out there?’ wondered Kurtz aloud. ‘Is that the battle or the elements?’

‘Shhh,’ said Liza. ‘Let the rest of the world take care of itself. We have our own child to attend to.’

‘Artemis,’ reflected Kurtz. ‘If we were Artemisians, we would be making this child very differently . . .’

‘Do you want that?’ teased Liza. ‘I could make Karel think only of the glory of the Artemisian state. Is that really what you want?’

To her surprise, Kurtz did not answer straight away.

‘I don’t know,’ he said, slowly. ‘There’s no denying how successful Artemis is. Their forges grow larger every month.’ He lowered his voice.

‘Is that what you really want?’ asked Liza, soft yellow eyes glowing, hands never ceasing their manipulation of the warm, pliable metal. ‘Tell me now, Kurtz. We are of Turing City State. We can make our child share its values, respect itself and others as individuals, or we can make our child strong and empty, just like an Artemisian. What do you
really
believe in?’

‘Liza, I don’t know. I know we agreed, but are we sure we are right to do this? Turing City will only succeed if
all
the children really believe in what we stand for. If just a few of them turn and run, the rest of us will fall. All it takes is a few children. Do we want to condemn our own child to be the one remaining while others are running?’

‘But if we all stand together we will have a better life. After all, we want what’s best for our boy.’

‘But which is the best?’

‘But it’s such a huge responsibility. Choices like this could change the world.’

‘Never mind the rest of the world,’ said Liza. ‘This is just about us. Come on, individual or drone, which is it to be? Turing City or Artemis?’