Read Two of a Kind Online

Two of a Kind 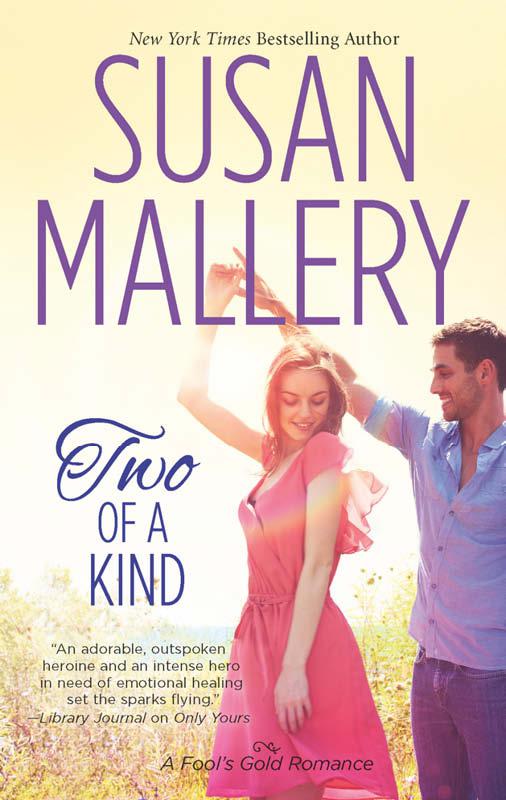 Felicia Swift never dreamed she’d hear a deep, sexy voice from her past in tiny Fool’s Gold, California. The last time Gideon Boylan whispered in her ear was half a world away…on the morning after the hottest night of her life. Her freaky smarts have limited her close friendships, and romance, but she came to Fool’s Gold looking for ordinary. Gorgeous, brooding Gideon is anything but that.

Black Ops taught Gideon that love could be deadly. Now he pretends to fit in while keeping everyone at arm’s length. Felicia wants more than he can give—a home, family, love—but she has a lot to learn about men…and Gideon needs to be the man to teach her.

As these two misfits discover that passion isn’t the only thing they have in common, they just might figure out that two of a kind should never be split apart.

“There’s a little fun, a little sizzle, and a whole lot of homespun charm.”
—
Publishers Weekly
on
Summer Nights

“Mallery infuses her story with eccentricity, gentle humor and small-town shenanigans, and readers…will enjoy the connection between Heidi and Rafe.”
—
Publishers Weekly
on
Summer Days

“If you want a story that will both tug on your heartstrings and tickle your funny bone, Mallery is the author for you!”
—
RT Book Reviews
on
Only His

“An adorable, outspoken heroine and an intense hero…set the sparks flying in Mallery’s latest lively, comic and touching family-centered story.”
—
Library Journal
on
Only Yours

“Mallery...excels at creating varied, well-developed characters and an emotion-packed story gently infused with her trademark wit and humor.”
—
Booklist
on
Only Mine
One of the Top 10 Romances of 2011!

To 2012 Fool’s Gold Co-Head Cheerleader Judie Bouldry and her girls’ great Nana Ellen, who shares her love of reading. Judie, you’re clever and enthusiastic, and Fool’s Gold is lucky to have you!

RATIONAL THOUGHT AND a working knowledge of hand-to-hand combat were useless when faced with the villainous power of the American house spider.

Felicia Swift stood immobilized in the corner of the warehouse, aware of the web, of the arachnid watching her, no doubt plotting her downfall. Where there was one female American house spider, there were others, and she knew they were all after her.

The logical part of her brain nearly laughed out loud at her fears. In her head, Felicia understood that spiders did not, in fact, travel in packs or scheme to attack her. But intelligence and logic were no match for a true arachnophobe. She could write papers, prepare flow charts and even do experiments from now until the next appearance of Halley’s Comet. She was terrified of spiders and they knew it.

“I’m going to back away slowly,” she said in a soft, soothing voice.

Technically, spiders didn’t have ears. They could sense vibration, but with her speaking quietly, there wouldn’t be much of that. Still, she felt better talking, so she kept up the words as she inched toward the exit, always keeping her gaze locked firmly on the enemy.

The light suddenly blacked out. Felicia jumped and turned, prepared to do battle with the giant mother-of-all-spiders. Instead she faced a tall man with shaggy hair and a scar by his eyebrow.

Because the spiders weren’t enough, she thought frantically. How was that possible?

She tried to rein in her unwieldy brain. Fortune favors the brave? That was helpful how? She had spiders behind her, the man who took her virginity in front of her, and she was thinking in Latin?

Felicia sucked in a breath and steadied herself. She was a logistics expert. She’d never met a crisis she couldn’t organize her way out of, and today would be no exception. She would work from big to small and reward herself by doing the Sunday
New York Times
crossword in less than four minutes.

“Hello, Gideon,” she said, bracing herself for her hormonal reaction to this man.

He moved closer, his dark eyes filling with emotion. She had never been all that good at reading other people’s feelings, but even she recognized confusion.

As he approached, she was aware of the size of him—the sheer broadness of his shoulders. His T-shirt seemed stretched to the point of ripping across his chest and biceps. He looked lethal but still graceful. The kind of man who was at home in any dangerous part of the world.

“What are you doing here?” he asked.

By
here,
she assumed he meant in Fool’s Gold and not in the warehouse itself.

She squared her shoulders—a feeble attempt to look larger and more in control. Similar to a cat arching its back and raising its fur. But she doubted Gideon was going to be any more intimidated by her than he would be by a hissing tabby.

“I knew that. I meant what are you doing in this warehouse?”

An unexpected response, she thought, suddenly less sure of herself. A result of the spider encounter. Their powers were far-reaching. She’d planned to avoid any contact with Gideon for several months. Here it was less than five weeks into her plan and they’d run into each other.

“I’m working,” she said, returning her attention to his question. “How did you know I was in town?”

“He did?” Something her business associate hadn’t mentioned to her. “When?”

“A few weeks ago.” Gideon’s mouth curved into a smile. “He told me to stay away from you.”

His voice, she thought, trying not to get lost in the memories of what the sound meant to her. While olfactory recollections were thought to be the strongest, a sound or a phrase could also shift a person back to another time. Felicia had no doubt she could easily be transported by Gideon’s scent; right now she was most concerned about his voice.

He had one of those low, sexy voices. As ridiculous as it sounded, the combination of tone and cadence reminded her of chocolate. Now his voice was a vibration she was sure the spiders could get behind. She should—

Her chin came up as her brain replayed his statement.

“Justice told you to stay away from me?”

Gideon raised one powerful shoulder. “He suggested it was a good idea. After what happened.”

Outraged, she planted her hands on her hips, then thought hitting Justice was a far better idea. Only, he wasn’t there.

“What happened between you and me isn’t his business,” she said firmly.

“That doesn’t give him the right to get in the middle of my personal life.”

“I didn’t see you trying to find me,” Gideon pointed out. “I figured you were comfortable with his...intervention.”

“Of course not,” she began, only to realize she
had
been avoiding Gideon, but not for the reasons he thought. “It’s complicated.”

“Of course. Our sexual encounter was over four years ago.” She had no idea if he’d guessed she’d been a virgin or not and didn’t see any reason to mention it now. “Our night together was...satisfying.” An understatement, she thought, remembering how Gideon had made her feel. “I’m sorry Justice and Ford broke down the hotel room door the following morning.”

Gideon’s expression changed to one of amusement. It was a look Felicia was used to seeing, and she knew it meant she’d somehow missed an obvious social cue or taken a joking comment literally.

She held in a sigh. She was smart. Scary smart, as she’d often been told. She’d grown up around scientists and graduate students. Ask her about the origins of the universe and she could give a fact-based lecture on the subject without having to prepare. But interpersonal interactions were harder. She was so damned awkward, she thought glumly. She said the wrong thing or sounded like a space alien with bad programming, when all she wanted was to be just like everyone else.

She pressed her lips together. For possibly the thousandth time in her life she thought how she would gladly exchange thirty IQ points for just a small increase in social awareness.

“I’m fine,” she said, offering what she hoped was a reassuring smile. “Couldn’t be better. Thank you for coming to my rescue—however unnecessary that was.”

He took a step toward her. “I’m always happy to help out a beautiful woman.”

Flirting, she thought, automatically monitoring his pupil dilation to see if it was real or simply politeness. When a man was sexually interested, his pupils dilated. But it was too dark in the warehouse for her to be sure.

“What made you scream?” he asked.

“It was large and aggressive,” she added.

“Yes. I have issues with them.”

Gideon chuckled. “You’re many things, Felicia, but we’re all aware that stupid isn’t one of them.”

Before she could figure out what to say to that, Gideon turned and walked away. She was so caught up in the way his jeans fit his butt that she couldn’t think of anything to say, and then he was gone and she was alone with little more than her mouth hanging open, a herd of American house spiders and their plans for her.

GIDEON BOYLAN KNEW the danger of flashbacks. They could come on suddenly and disoriented him. They were vivid, engaging all his senses, and when they were gone, a man had no way of knowing what was real and what was imagined. After being held captive for two years, he’d been ready to give in to madness. At least it would have been an escape.

His rescue had come just in time, although too late for the men who had been with him. But even being out of the hands of tormentors hadn’t given him any sense of freedom. The memories were just as painful as the imprisonment had been.

Claiming Noah by Amanda Ortlepp
Rising Sun by Robert Conroy
Running Red by Jack Bates
Marriage & the Mermaid (Hapless Heroes) by Cusack, Louise
Everything Changes by Stahl, Shey
Fire & Brimstone: A Neighbor from Hell by R.L. Mathewson
The Secret by the Lake by Louise Douglas
But I Am A Lesbian! (Filthy Education Series) by Sophie Sin
Wrote For Luck by D.J. Taylor
Two Cows and a Vanful of Smoke by Benson, Peter