Read Under the Big Top: My Season With the Circus Online

Under the Big Top: My Season With the Circus 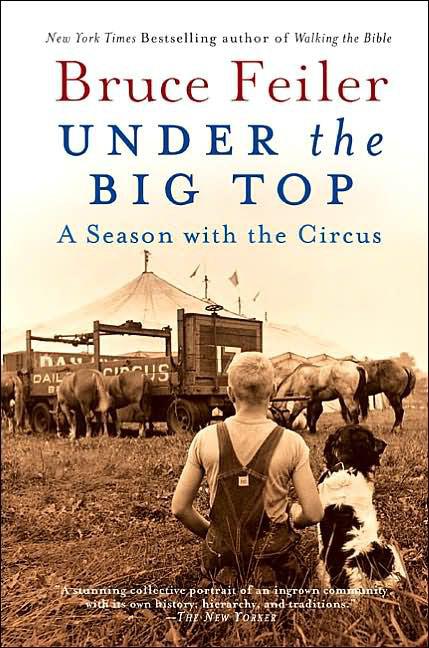 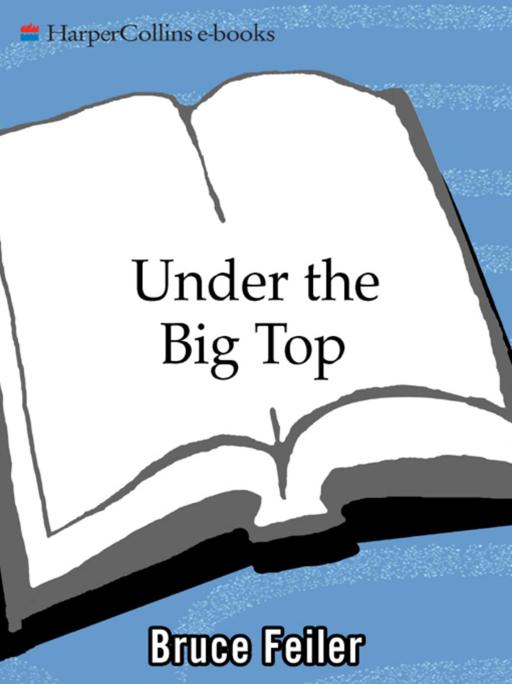 Under the Big Top

A Season with the Circus

For my brother,
my other eye

The circus is a jealous wench. Indeed, that is an understatement. She is a ravening bag who sucks your vitality as a vampire drinks blood—who kills the brightest stars in her crown and who will allow no private life to those who serve her; wrecking their homes, ruining their bodies, and destroying the happiness of their loved ones by her insatiable demands. She is all of these things, and yet, I love her as I love nothing else on earth
.

The Circus on Parade

2 Under a Canvas Sky

A Rare Breed of Tiger

5 This Is When They Become Real

Give the Bear a Dog

6 Death of a Naïf

The Amazing Art of Hair Suspension

8 A Streak of Blood

The Color of Popcorn

9 The Star of the Show

Where Are the Clowns?

Love on the Wire

Behind the Painted Smiles

Read All About It

Other Books by Bruce Feiler

A Toe in the Ring

Dr. Darryl Heard’s voice was stern and deep, softened only by a faint Australian brogue that gave his already blunt warning an eerie, other-worldly air.

“Whenever you take an animal this large, this old,” he continued, “and put her under general anesthesia, there’s a forty percent chance that she won’t wake up again. We may have to roll her out of here.”

“You can’t use local anesthesia?” E. Douglas Holwadel stepped forward into the doctor’s face, removed a rapidly disappearing cigarette from his lips, and ran his empty hand across his receding gray hairline. As co-owner of Sue, a forty-two-year-old, 5,500-pound, “petite” Asian elephant valued at around $75,000, he alone was allowed to smoke in the operating barn. Though it was not yet 8:30 in the morning, he was already nearing the end of his first pack.

“Not with an operation of this magnitude,” Dr. Heard replied. “She might go berserk and crush us all. We have to put her to sleep entirely.”

“And you’ve done this before?”

“A dozen times. Just last weekend I went up to Albany, Georgia, to remove a tusk from an African male. We had him up twenty minutes after the operation was done. I just want you to be aware of the dangers. We can always stop the operation if you’re not comfortable—”

“In that case,” said the doctor, “I need your signature.”

Doug dropped his cigarette onto the floor and retrieved a fountain pen from the well-starched pocket of one of his two dozen Brooks Brothers shirts. A little over four hours earlier, Doug and I had left circus winter quarters in a dark, driving rainstorm not uncommon for late January in central Florida. The previous day, after our introductory meeting, Doug had invited me to accompany him during this emergency operation to remove an ingrown toenail from Sue’s right front leg. Never having seen an elephant under anesthesia, I agreed.

It was well before dawn when we set out. The outside thermometer in his maroon Cadillac with EDH plates said 39 degrees. We followed behind newly painted “Truck No. 60, Elephant Department,” kitchen white with stylized red letters that read: “Clyde Beatty-Cole Bros. Circus—World’s Largest Under the Big Top.” Leaving DeLand, home of the circus and undisputed fern capital of the world, we passed through DeLeon Springs (“They don’t have a decent bar,” Doug mentioned, “so everyone drives to Barberville”), across the St. Johns River, which runs from Orlando to Jacksonville (“Do you know why the St. Johns is the only river in Florida to run upstream?” he asked. “Because Georgia sucks.” He laughed especially hard, knowing Georgia was my home state), until we arrived at the crack of dawn at the William N. Inman and Clara Strickland Inman Food Animal Hospital at the University of Florida in Gainesville.

“Could you stop that drilling and sawing,” Doug called out to some nearby construction workers after he had signed the papers. “It’ll spook the hell out of Sue.”

Finally, at a little past 8:30, with the arrangements for the operation complete, Captain Fred Logan waddled alongside the high-tech operating barn and began escorting Sue up the walkway with a bull hook, a short cane with a stubby hook on the end. He paused slightly to let a Vietnamese potbellied pig wobble across the path. A seventy-year-old Canadian who had literally run away to join the circus when he was a boy, Fred had been the chief elephant trainer with the Clyde Beatty-Cole Bros. Circus for over two decades, but in all that time he had never had to put an elephant under total anesthesia.

Once inside, Fred led Sue to the center of a hay bed about the size of an average mall parking space.

“Be sure she lies down on her left side,” called Dr. Heard. “It’s the only way we’ll be able to get to her right front leg and have total access to her toenail.”

“Don’t worry,” Fred said gruffly. “That’s the only way she’ll go.” Circus elephants, he explained later, are trained to lie only on their left side. It’s one of only eight or so commands the average elephant can comprehend.

Once Sue was standing in her place; Fred tied a thick yellow rope to each of her left feet and tossed them under her body. As soon as she felt the ropes Sue started to squirm.

She stepped forward and started to shake.

With the patient temporarily calm, Dr. Heard snapped into action. He tossed the ends of the two ropes over Sue’s back and ordered four of his white-coated assistants to stand behind the protective railing and prepare to pull her over if necessary. When everyone arrived in position, he gave the signal to advance.