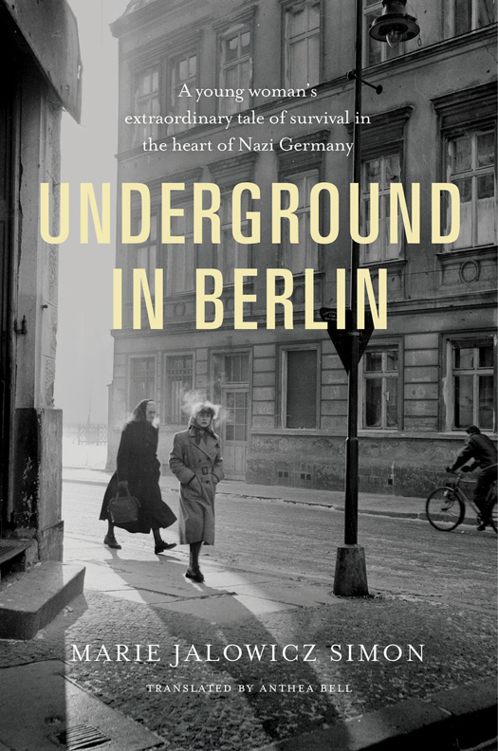 PUBLISHED BY ALFRED A. KNOPF CANADA

Published by arrangement with The Clerkenwell Press, an imprint of Profile Books, Ltd., United Kingdom

All rights reserved under International and Pan-American Copyright Conventions. No part of this book may be reproduced in any form or by any electronic or mechanical means, including information storage and retrieval systems, without permission in writing from the publisher, except by a reviewer, who may quote brief passages in a review. Published in 2015 by Alfred A. Knopf Canada, a division of Random House of Canada Limited, a Penguin Random House Company, and simultaneously in the United Kingdom by Profile Books Ltd., London. Distributed in Canada by Random House of Canada Limited, Toronto.

Underground in Berlin : a young woman’s extraordinary tale of survival in the heart of nazi germany / Marie Jalowicz Simon; translated by Anthea Bell.

Cover design based on an original by Peter Dyer

Marie Jalowicz Simon, the extraordinary woman who narrates the wartime life recorded by her son in
Underground in Berlin
, was eleven years old when Hitler came to power in 1933. She was one of some 163,000 Berlin Jews, approximately a third of the total German Jewish population, which in turn was less than one per cent of the whole. Racist ideology doesn’t need vast numbers to feed on. Feeling swamped needs no swamps.

By 1939, some 400 Nazi decrees later, the Jewish Berlin population had dwindled to 75,000. Laws had been put in place excluding Jews from the professions, public and business life, universities and state schools, and finally from unforced employment. Jews were stripped of assets, pensions and homes, compelled by the race laws of 1935 that made Jewishness a matter of lineage not religion, to declare themselves on ID cards and passports, and eventually on their clothes. After 9–10 November, 1938,
Kristallnacht
, the Night of Broken Glass, they were excluded from the very literature, theatres, concert halls, cinemas and sports venues that had so bound them to German culture. Eventually they were transported out of the country (on the only trains permitted them) and excluded from life itself. In May 1943, Berlin was declared
Judenrein
– cleansed and clear of its Jews.

But Marie Jalowicz was there. How this happened and how she managed to survive through the war years in Germany is the tale these vivid pages tell. They may be based on seventy-seven tapes of conversations she held with her son towards the end of what turned out to be a long postwar career as an academic in East Berlin, but they bear all the immediacy of the present tense.

Marie’s mother, Betti, well-educated, vivacious died of cancer in 1938. Betti’s brother, an orthodox and eccentric ‘joke dealer’, who lived with a gentile woman, followed her two months later, literally starving to death in protest at the Nazi prohibition on Kosher food provision. Marie’s father, no longer able to practice as a lawyer, refused a visa to Palestine, lived an impoverished life with his daughter in bug-infested lodgings until he followed his wife in March 1941.

By this time Marie had already been working for some ten months – along with some 200 other Jewish women – as forced labour making armaments for Siemens at their Spandau plant. These were Rosie the Riveters with a vengeance! Their overseers were men, often enough Nazis. But a vibrant
esprit de corps
existed among the women. Solidarity, together with small acts of sabotage, made the long grind of daily life tolerable. Marie has a young person’s curiosity about others and gets to know many on the shop floor. She also has a writer’s relish for individual quirks and a marked ability to convey character with a telling detail.

Even though they may be anti-Semitic, the overseers bend a rule for her here and there and when she needs extra leave to cope with her father’s death and funeral arrangements, it is granted. Soon after, since Jews can’t leave a job, her superior fires her on her request. She wonders at this kindness of strangers, anti-Semites among them. She explains it to herself by noting that Berlin was not the provinces: its share of Communist and Social Democratic voters was far greater. Then, too, ‘I realised that the same Aryan German who hated the rich Jew from the big house like poison … had nothing against starving young girls who worked hard, just as he worked hard himself.’

Her father dead, Marie has to find new lodgings. All around her relations and friends are being deported. She is pursued by officialdom to take up another forced labour post. But young woman that she is, she hungers for freedom rather more than for those essential ration coupons which come with registration and work. She starts wearing her Star of David only in the areas where she is known, then tears it off and hides it for long daily treks through the city. A threaded needle in her pocket allows her to sew it back as soon as she enters familiar terrain.

In June 1942, when the Gestapo come to arrest her at six in the morning, she manages to outwit them and leave the building in her petticoat. She has now gone to ground, or as the German title of this memoir has it, become
Untergetaucht
– submerged. U-boats was the name eventually given to those 1,700 Jews who managed somehow to survive the war under the surface of officialdom, to disappear, their identities changed and often changing, like their innumerable addresses and places of hiding.

When rules are made by madmen and torturers, justice lies in breaking them. It takes courage, cunning and occasionally a ruthless resilience that the young seem to be better at than the old. It also takes a great deal of the moral luck Marie has in spades to make it through the long, hungry war years, the bombing and the difficult aftermath.

I recognise that luck from my mother, whose wartime story I told in my family memoir,
Losing the Dead
. Living as a Jew under the Nazis was no business for shrinking violets or indeed for women who feel victimised by male attentions of the sexual kind. Linked to a fiancé, Marie escapes to Bulgaria. She enters into marriages of convenience, interprets a black eye as a feature that allows her to blend into the working class environment she moves in. She will do a great deal for food or lodging. This is not a time when anyone can be out on the streets during working hours. When the liberating Russians arrive, the sex act is no cause for immediate breakdown: rather, the proprietorial sign the soldier leaves on her door means she is bothered by no one else.

The fact that Marie emerges scathed but unbroken is a tribute to her great intelligence and inner resources.

This is a book which in its adventurous particularity as well as in its common experience sheds new light on a terrible time. Like Hans Fallada’s
Alone in Berlin
, it throbs with the pulse of the backstreets of a world capital in peril. Here the working and criminal classes can be kinder than the educated elite who administer injustice.

But unlike Fallada,
Underground in Berlin
is testimony. It’s also that rare thing – a wartime story from the woman’s point of view. I couldn’t put it down.

It was freezing outside, and already dark. The bar was in Wassertorstrasse, part of the Kreuzberg district of Berlin where I had never been before. I entered the place, which was still entirely empty. Someone called ‘Hello?’ from a back room. Looking through the open doorway, I saw a woman sitting there mending a fur coat. She seemed very reluctant to abandon this occupation and shuffle through to the front room to see me.

Benno Heller had sent me here. He said I was to approach the only waitress in the bar, a woman called Felicitas. She was one of his patients. As a so-called ‘half-Jew’, she ought really to have been wearing the yellow star, but she was not. Heller, a gynaecologist, had already found me a place to stay now and then, but this time he had warned me: Felicitas is something of a crook. He had not been happy about giving me her address, but he didn’t know anyone else who could help me.

A sense of terrible dread surfaced in me, a deep fear: everything in my situation and in this part of the city was strange to me. All the same, I brought myself to tell Felicitas, in a few words, why I had come.

She thought for a moment and then told me, in her thick Berlin accent, ‘I know what. The rubber director ought to be here soon, he’s always one of the first in the evening. He might be able to help.’ Meanwhile, she told me to stand at the bar counter and act like any ordinary guest drinking a glass of beer.

Soon the ‘rubber director’ entered the bar. I was horrified. At a rough guess he was in his early fifties, and he walked with great difficulty. He moved as if his legs were made of rubber, and owed his nickname to his awkward gait and the fact that, as I learned later, he really was the director of a small company.

His way of communicating was like his odd walk, a kind of verbal mishmash, and he brought out what he meant to say only after various failed attempts. In order to be understood, he kept saying the same thing over and over again, hoping to get it out more clearly. Yet again I felt terribly anxious. A woman doctor among my circle of acquaintances had once told me about patients in the late stages of syphilis to whom she gave psychiatric treatment. She said that they walked as if their legs were made of rubber, and they could no longer articulate properly. For instance, they didn’t say
Topflappen
[oven cloth] but
Topfappen
, and then corrected it to
Opfappen
– exactly as the man now before me spoke.

THE VICTORY DANCE by SilverRain, Mahogany
Commando City: A World at War Novel (World at War Online Book 7) by Mitchell T. Jacobs
A Taste for Honey by H. F. Heard
A Vision of Fire by Gillian Anderson
The Bond That Built Us by KK Bauer
Passion Blooms in Paris (Diary of a Free Woman) by Thorne, Diane
Viking Raiders by Chris Blake
Rhonda+Nelson+-+The+Soldier by Unknown
Criminal Conversation by Nicolas Freeling
The Girl Next Door by Brad Parks