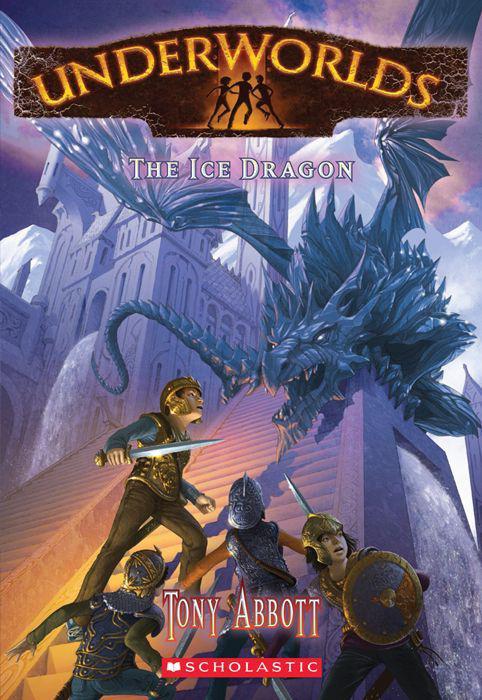 A Map of the Underworlds

Chapter One: Into the Northern Night

Chapter Three: From Hut to Hall

Chapter Five: Written in the Beginning

Chapter Seven: The Rune and the Throne

Chapter Eight: The Journey of the Dead…and Us

Chapter Ten: The Myth of Orpheus

Normally, I live in Pinewood Bluffs with my friends Jon Doyle, Dana Runson, and Sydney Lamberti. But normal wasn’t normal anymore, and hadn’t been for weeks. Take right now, for example. We were clinging to giant mythical horses, flying a hundred miles an hour across the freezing skies to Iceland.

And since we’d never been encased in ancient Norse war armor or ridden flying horses, we didn’t know that cold wind whistles into iron helmets and freezes your eyeballs.

But we were finding out.

“No time!” shouted Miss Hilda, the armor-clad lady flying ahead of us. In her mythological life, Miss Hilda was Doom Rider, one of the famous Valkyries from Norse mythology. They were the three daughters of the supreme Norse god, Odin, and they chose which heroes died in battle. So far, they hadn’t chosen us.

Oh, yeah — in their other lives, the Valkyries were the lunch ladies at Pinewood Bluffs Elementary.

“Look there!” said Miss Marge through her silver helmet, pointing to the earth below.

Blinking the icicles from our eyes, we saw a white island in a frozen sea.

The Valkyries sang their favorite tagline — “Ho
yo
-To
ho
!” — and all seven horses dove like missiles
seeking a target. Hanging on for dear life, my eyes shut as tight as I could make them, my mind spun with the events of the last few days. They weren’t pretty.

First, the evil Norse god Loki stole Dana away to the Greek Underworld. Then Sydney, Jon, and I snatched the famous Lyre of Orpheus from a museum and rescued Dana. Next, Loki brought the giant, one-eyed Cyclopes to the power plant in Pinewood Bluffs to make him a suit of magic armor. Once his armor was complete, he stole a half-dozen fire monsters from the Babylonian Underworld and set them loose to burn up our planet. Oh, and then he turned around and had Dana’s parents kidnapped, sent them to the Norse Underworld, and started searching for something called the Crystal Rune.

All so he could overthrow Odin and take power for himself.

Miss Marge’s booming voice cut through my thoughts. “Odin’s messengers approach. We fly to them!”

As the Valkyries urged their giant horses to fly faster, the air echoed with a long, eerie call. Two ravens —
one white, one black — circled out of the sky and joined us.

“What news do you bring us?” Miss Hilda asked the birds.

The ravens fluttered alongside her, chattering and clacking their beaks. A moment later, they flew back into the clouds.

“Loki has left the Babylonian fire monsters to complete their task in Pinewood Bluffs and beyond,” said Miss Lillian. “He has come here to the north. Alone.”

“This is good, right?” said Jon. “I mean, not the fire monsters part, but the fact that Loki’s still up here?”

It was good. Ever since Loki’s ghostly Draug warriors had kidnapped Dana’s parents, Dana had worried about her parents being trapped in the Norse land of the dead, a creepy place called Niflheim. The upside was that the Crystal Rune was still in our world somewhere — and apparently, only Dana knew where. So Loki wasn’t about to harm Dana’s parents. He needed them as leverage.

At least we hoped so.

“We need to find the Crystal Rune as fast as we can,” said Sydney. “Those fire monsters will burn our world to ash.”

The horses leaped forward, making a beeline for the coast of Iceland.

“There’s an old legend about the Crystal Rune being buried near the island’s northernmost volcano,” Dana said. “We’ll only be able to bargain with Loki if we have the rune.”

So we knew what we had to do.

Oh. And stay alive, too.

That was a big one.

Just as we began to make out the shape of Iceland’s mountains below, the air fluttered behind us.

The Valkyries slapped the reins and drove their horses downward. Ours followed. I wasn’t sure whether
the ghost falcons spotted us, but they kept flying due north — exactly where we were heading.

“Loki’s falcons will join the battle for Odin’s throne,” Miss Lillian said ominously from behind her helmet. “Their appearance means that Ragnarok is near.”

Ragnarok
is a word in ancient Norse that means
the end
. The Twilight of the Gods. The end of the world of Norse divinity. I couldn’t imagine what that might look like, but I knew it was bad.

“That’s two signs,” said Dana. “The Fires of Midgard are one of the signs predicted before the overthrow of Odin, too. We just saw that happen — all of Pinewood Bluffs was on fire. Loki’s making sure all the predictions happen.”

We dipped out of the clouds over a vast body of frozen water. It looked like a lake, but it was actually the opening of a humongous volcano, miles across.

“The legend tells us that the Crystal Rune was hidden by Odin himself,” Dana said as we circled overhead. “But there was one book that revealed that the rune
was in the crater of the northernmost volcano in Iceland, ‘buried by sound and silence.’ My parents burned the book to keep it from Loki, but they read it to me over and over. I guess they knew I’d need to find the rune someday.”

Dana drew in a long breath. I couldn’t imagine how worried she was about her parents. If my family was in the Underworld, I’d spare nothing to get them back.

Tiny villages clustered on the south side of the volcano below were dwarfed by the enormity of the crater. Soon the horses landed at a fast gallop on the rim.

“
Buried by sound and silence
,” Sydney repeated. “It figures there would be a riddle attached. Nothing ever comes easy when the end of the world is at stake.”

“I hope we don’t get buried there ourselves,” said Jon. Silence. He added, “Don’t everyone laugh at once.”

We dismounted. Together, Sydney and I helped the Valkyries hammer an iron post into the edge of the rim,
attach a thick rope to it, and lower the rope down the inside wall of the crater.

“Usually?” said Jon. “What should we do if it starts to get active again?”

Miss Hilda peered into the crater. Without a hint of humor, she said, “Remember the good times.”

Sydney blinked. “All ten years of them.”

“Take these torches,” Miss Lillian said, unpacking two sticks from her horse’s saddlebag and lighting them. “We must go. Odin needs us. Good luck.”

“Wait,” said Jon. “Any other words of advice before you go?”

Miss Marge looked sternly down from her horse. “Always remember …”

With a whirl of wind and a scatter of ice, the Valkyries rode up into the sky again with their horses.

We looked over the rim to the deep crater below. Steam and fog rolled up from the abyss, so we couldn’t see what might be down there. Eerie noises echoed up the rocks. Creaking. Fluttering. The clattering of rocks down the side and onto the frozen surface of the lake.

“When the volcano erupted a few years ago, a net-work of ancient mines was uncovered,” said Dana. “Scientists haven’t explored them all the way. Which is good for us.”

It was hard to believe that any of this was good for us.

I held on to the rope and lowered myself onto the steep path that twisted around the inside of the volcano, using my sword as a snow pick to steady myself. Soon we were making the long, winding descent into the crater.

A slow hour later, we stood together on a narrow lip of rock, staring into a ragged black hole in the side of the volcano and wondering.

“The mine entrance?” asked Sydney.

Inviting or not, Dana and I stepped inside first, since we had the torches. They didn’t help all that much. Darkness closed around the flames so tightly we saw only a few feet ahead. We had to crouch really low to avoid getting our heads sliced off by the jagged rocks hanging from the ceiling. Step-by-step we pressed deeper into the mine, until the way was nearly blocked by huge, stringy cobwebs.

“If a giant spider attacks us,” said Jon, “I’m going to be very upset. Of course, I’m starting out pretty upset, so you might not be able to tell the difference. By the way, these mines are abandoned, right?”

Dana burned the cobwebs away and squinted into the darkness. “Probably.”

“Probably?” Jon grumbled. “You and the lunch ladies should start a comedy act —”

We heard a faint roar from a narrow passage on our left. Cautiously, we stepped in. Soon the roar was all
we could hear, echoing all around us. As we walked, the tunnel opened into a cave whose back wall was a rushing waterfall.

“Buried by sound?” said Jon, quoting the riddle. “Do you think the Crystal Rune is behind the waterfall?”

“There’s one way to find out.” Sydney nudged my arm. “Owen, the lyre.”

I was wondering how long it would be before I’d have to use it.

Ever since we had “borrowed” the ancient Lyre of Orpheus from a museum, and since it turned out that I seemed to know how to pluck melodies from its seven strings, we’d relied on the lyre to do some pretty awesome magical stuff. The fact that playing it almost made my brain explode either meant that I really shouldn’t be playing it, or that was just some kind of weird price you had to pay to get magic to work for you. Either way, the lyre had saved our lives a few times already, so I endured the pain and sucked it up.

I handed Sydney my torch and took the lyre out of its holster. Holding it close, I plucked first one string, then another. My head instantly began to throb and
my eyes felt like fireballs. But the melody was working. In a matter of seconds, the falling water slowed, then thickened like ice, then stopped altogether. It looked like an unmoving curtain with the tunnel continuing beyond it.

“That still impresses me,” said Jon. “How does the lyre have any magic left, after all it’s been through?”

It
was
impressive. The lyre had been through a lot. I’d used it as a weapon. Its strings had been busted more times than I can remember, but it still made music. I hoped that whatever today would bring, the lyre would remain in one piece.

We quietly approached the frozen curtain, until we heard something in the passage behind us.

“So,” Jon whispered. “The mine isn’t abandoned after all.”

Sydney held up the torch. In its glow we could see a pack of doglike creatures pad slowly into the cave. There must have been a dozen of them. They had no
skin — just bones and teeth and skulls and slitty eyes. That glowed.

Third Time's a Charm by Virginia Smith
The Little Way of Ruthie Leming: A Southern Girl, a Small Town, and the Secret of a Good Life by Dreher, Rod
Corrigan Magic (Corrigan: Blood Destiny Book 2) by Helen Harper
Star Bright by Christina OW
In the Heat of the Bite by Lydia Dare
Surrender my Heart (The Subzero Series) by Elise, Rebecca
While the Shark is Sleeping by Milena Agus
An Ever Fixéd Mark by Jessie Olson
Snowboard Maverick by Matt Christopher
Devil's Own by Susan Laine