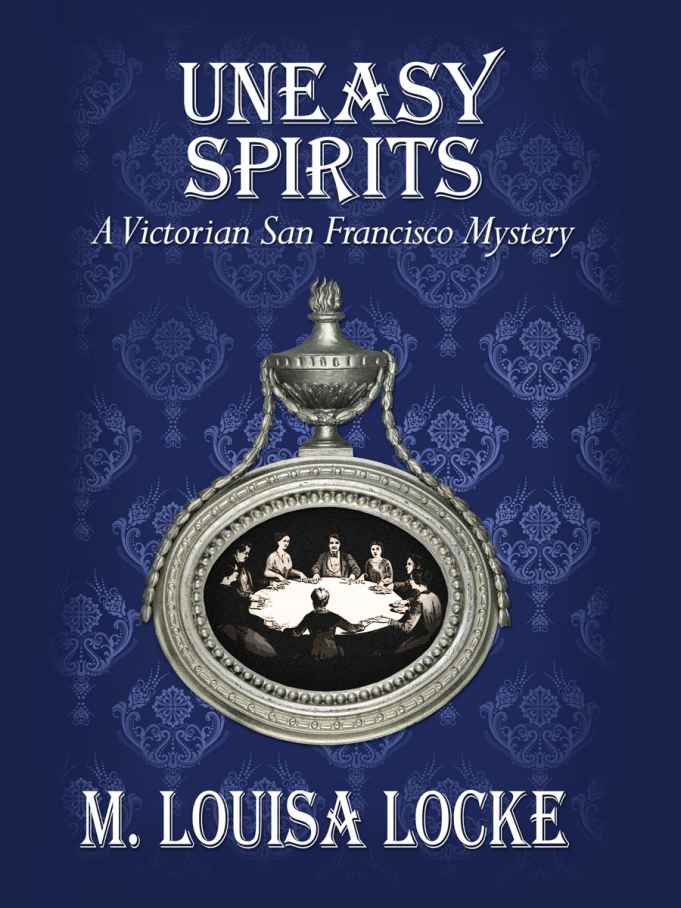 This book is a work of fiction. Names, characters, places, and incidents are either the product of the author's imagination or are used fictitiously, and any resemblance to actual persons, living or dead, business establishments, events, or locales is entirely coincidental.

Dedicated to all the family and friends who gave their support during the writing of this book. Special thanks to my writer’s group, Ann Elwood, Abigail Padgett, and Janice Steinberg; my friends Jim and Victoria Brown, Sally and Cecil Hawkins, and Terry Valverde; and my loving husband, Jim, and my daughter, Ashley, and her family, who have given me such joy.

A special thanks goes to my father, Joseph H. Locke, who has provided me with the model of how to grow old with grace, courage, and good humor.

Why hasn’t that good-for-nothing boy come up to get me ready for bed yet? The hall clock just chimed quarter past nine! Eighty-four years old and I can still hear everything that goes on in this house. There! Sounds like he just knocked something over, down in the parlor. Probably he’s smashed up all my pretty treasures by now. Counting on me never making it downstairs again. Hah! Well, son, you have a surprise coming to you. Next fine day, I’ll holler down to the garden for Manny and get him to come up here and use those muscles of his to carry me all round the house. See what mischief you’ve been up to. I’ll make you pay for everything you’ve damaged.

Won’t I make you pay! You and that young wife of yours, too. Haven’t seen hide nor hair of her since noon. A blessing, really. Watching her gallivanting around the place like she owns it. Makes me sick. She can’t keep house worth a damn. Lets the tradesmen and that thieving cook take advantage of her. That’s why the housekeeping money don’t last! Between the two of you, robbing me blind.

I never should have let you move back in when your pa got so sick. That was a mistake. But he wanted his son nearby, didn’t he? Wanted to keep an eye on how you were running the company is more like it. If just one of the other boys had lived, oh things’d be different. Six sons, and the sorriest one of them all is the only one that outlasted their pa. If Zeke just hadn’t gotten killed in that brawl. Now that was a man who loved his mother. He wouldn’t have left me up here all alone. It’s time for my heart pills and I want to go to bed!

Wedged in a massive wing-backed chair facing the fireplace, the old woman fretfully moved her head from side to side. The few glowing embers in the grate left the room in near darkness, except where the glow from the gas fixture in the hallway showcased the porcelain figurines of shepherds and shepherdesses preening across the top of a mahogany dresser. Ropes of pearls cascaded down the front of the stiff satin dress that stretched over the woman’s colossal frame. Wispy white hair capped a face of concentric soft circles, from her multiple chins to the drooping round hole of her mouth. But the pale cold eyes that glittered in the faint light ruined any illusion of amiability.

She suddenly raised an elegant wooden cane and began to pound furiously on the floor, setting every piece of jewelry and china to prancing. Just as abruptly, she stopped and cocked her head, the silence filled by her ragged breathing.

There, I hear you coming up the stairs. Forgot me, didn’t you, sonny boy? Left me to freeze up here. How many times have I told you, my poor feet can’t take the cold evening air? But now you’ve let my fire go out, and it will take forever for me to warm up. It’s Nurse’s night off and good riddance to her, sneaky thieving woman, but that means you or that good-for-nothing wife of yours will just have to rub my feet for me tonight, won’cha!

What are you waiting for? Think I can’t hear you standing out in the hallway? You know it’s past time for my pills; I can hardly breathe. Dr. Hodges told you how important it is to give them to me on time. Too scared to come in by yourself, are you? Want me to say ‘pretty please?’ I wouldn’t give you the satisfaction.

That’s better, come right on in and quit trying to sneak up on me. I know that trick, always trying to frighten me to death. There you go, ran right into the end of the bed, you clumsy oaf. Now, why are you just standing there breathing down my neck? Irritating boy. You just come around in front where I can see you and I’ll rap you one with my
. . .
What are you doing? Stop it! No, no, get that away, I can’t brea . . .

The pillow was carefully replaced on the bed, the clock in the hallway struck nine-thirty, the last ember snuffed out, and the Dresden figurines stared silently as hundreds of tiny pearls clattered softly to the floor.

Across town, a young girl sat in the attic in a large armchair, her face in deep shadow. A shaft of moonlight from one of the two eastern facing windows cut diagonally across her chest, revealing multiple loops of colored beads that fell down to her waist. Her feet dangled, not touching the floor. In her arms lay a china doll, whose painted frozen features exhibited more life than could be found in her own face.

A song issued tunelessly from those rigid lips.

The girl straightened and pointed, her index finger contorted in a grotesque fashion. “You stop it right now.” Her voice, despite a quaver, was sharp and strong, and its force twisted her face into a mask of fury. “I see what you did. I see everything. You can never hide from me . . . stop . . .” The girl clutched at her chest, and the beads broke, cascading to the floor. The girl slumped, again immobile, humming.

Annie Fuller leaned across to stare at the woman’s hands resting palms up on the dark green velvet tablecloth in front of her. She picked up the right hand and slowly traced the client’s heart, head, and life lines, struggling to find some words of comfort to extract from these faint creases that crisscrossed Mrs. Crenshaw’s plump palms. Stalling, she picked up the left hand. She turned the hand over, noting that the gold wedding band and modest diamond engagement ring were becoming embedded in the flesh of the ring finger and that the hand was cold and dry.

“
You are still having trouble breathing, aren’t you, Mrs. Crenshaw? Did you try the extra pillows, as I suggested last week?” asked Annie.

“
Oh, yes, Madam Sibyl, I did, and, just as you foretold, I have slept so much easier,” Mrs. Crenshaw replied.

Annie glanced up, sudden suspicion sharpening her voice. “You did return to see Dr. Hammersmith, didn’t you? Remember what I told you; the science of palmistry is not incompatible with the science of human physiology. What I learn from reading your palms and what Dr. Hammersmith learns from listening to your heart with his stethoscope can both be of use to you.”

Mrs. Silas Crenshaw, a fashionably dressed woman in her late sixties, turned her head away for a moment. She then sighed and said, “I saw him, but he doesn’t do me any good. He just tells me to be patient. He says a woman my age shouldn’t expect to come back quickly from a bout of pneumonia. What he won’t tell me is when I can travel to Iowa to meet my new grandbaby. You know how I long to see my daughter and that precious child. He will be six months old in December. My husband is quite determined we should wait until my cough is entirely gone, and Dr. Hammersmith refuses to advise him that I am well enough to travel. So I need you to tell me what is going to happen. There are arrangements to be made; Mr. Crenshaw can’t just leave for a month at a moment’s notice. Please, when will I be well enough to visit my daughter?”