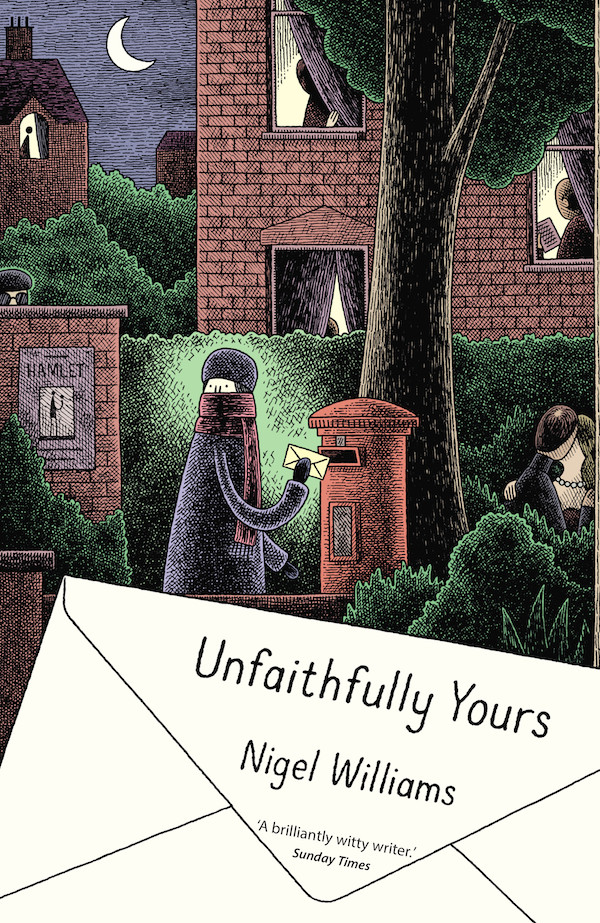 Charlie (based on his teleplay)

They Came from SW19

Scenes from a Poisoner’s Life

Lord of the Flies (adapted from

the novel by William Golding)

its fourth season on

Two and a Half Men

From Wimbledon to Waco

First published in the UK by Corsair,
an imprint of Constable & Robinson Ltd., 2013

The right of Nigel Williams to be identified as the author of this work has been asserted by him in accordance with the Copyright, Designs and Patents Act 1988

All rights reserved. This book is sold subject to the condition that it shall not, by way of trade or otherwise, be lent, resold, hired out or otherwise circulated in any form of binding or cover other than that in which it is published and without a similar condition including this condition being imposed on the subsequent purchaser.

Cast of Principal Characters
In order of appearance

I thought I would put together all the letters that passed between what I still cannot help calling the Puerto Banús Eight. Nine, I suppose, if you included me, but I was never – thank God – conscripted into one of those villa holidays.

I come over as an absolute jerk. I think that is what I was in those days. Maybe that is still a good way of describing me, but at least now I am an absolute jerk who is loved by you.

Don’t ask me how I got hold of them. That’s my job. I am rather proud of being a snooper – and getting better and better at it with every new marital breakdown in Putney. I am no longer ashamed of who I am – and have even been known to own up to the fact that I went to a minor public school.

These aren’t all the letters, of course, and, as well as letters, there were emails and phone calls; but I think the letters say more about us all than any of the more casual traffic. Your prose style tells the world more about you than almost anything else, which is perhaps why now I take more trouble with it.

I have typed them up – so that you don’t get John Goldsmith’s unusually neat doctor’s hand, Barbara G’s wild scrawl, Mike Larner’s prim italic, Sam’s bold cursive or your wonderful way of managing to make the alphabet look as if it was eating itself. The butch, broad strokes of Gerald Price’s Parker pen are also absent – as are the hideous, spider-like marks made by my (now abandoned) Mitsubishi Uniball. The only handwritten letter I have left as it was is the last and, I think, rather touching, message from Elizabeth Price to me.

Her handwriting was not as I had imagined it. It was crazy. There were wildly irregular spaces between words, sentences and even, sometimes, different ingredients of the same character. Significant?

Here they are anyway – Elizabeth and Gerald Price, Sam and Mary Dimmock (that’s you!), Mike and poor Pamela Larner and the Perfect Couple Who Weren’t – John and Barbara Goldsmith. They come over as clear as day, don’t they?

That is the beauty of letters. There is nowhere to hide. So here you are. I thought it might amuse you. I’ve touched them up a little and added a few chapter headings, but – I promise – I have not seriously interfered with what any of us wrote to each other. This is Putney, red in tooth and claw. My version of the Great Putney Novel, the one I often talked about writing back in the day. All You Ever Wanted to Know About Sixtysomethings – a group I have only recently joined.

PART ONE
Chapter One
Mrs Price Hires a Private Dick

I am writing to you because I think my husband may be having sex. I am not sure with whom he is having it but it is certainly not with me.

He may, for all I know, be involved with more than one person. I use the word ‘person’ advisedly. He may be doing the deed of darkness with females, males, or some combination of the two, since, as far as I can gather, at his public school, a boarding establishment, homosexuality was more or less compulsory for the younger boys. I am fairly certain he is not a paedophile, however, which is some comfort. We have two children and, as far as I know, he has never interfered with either of them. Indeed, it has been something of a struggle to get him to even acknowledge their existence.

I have studied various kinds of detective agency but none of them seemed entirely convincing. Indeed, from the general tone of their advertisements, I gained the impression that many of them would have joined, enthusiastically, in whatever it is my husband is doing.

I am not, at this stage of the proceedings anyway, interested in photographic recordings of him committing adultery. Nor am I sure, at the moment, what I will do with the information you obtain or, indeed, what it is I expect you to uncover. It may be that he is not having sex with anyone at all. Though, from my observation of him over more than twenty years, I think that highly unlikely. He once told me that he would ‘shag the Archbishop of Canterbury if that was the only thing on offer’. A joke – of course - but people reveal themselves through their jokes. Don’t you think?

We have – as people do over the years – grown apart and, to be honest with you, he has become, in many respects, a complete mystery to me. I want, in other words, to find out more about him without having to go to the trouble of asking him. It may be simply that he has discovered a new hobby and is not keen to tell me about it. He may have bought a boat. No fewer than three men married to friends of mine have done precisely that – without telling their wives.

I want information about him, Mr Gibbons, and I want it gathered with complete and utter discretion. I suspect you are well placed to supply that commodity. If only because – during the quite extensive period of time in which I have lain in wait outside your offices – it has become clear that you are about the only person who ever visits them.

There may well come a time, Mr Gibbons, when I will require professional surveillance of his activities even when he is on our premises. We have a five-bedroom house and it is not always possible to keep track of him inside the property; but, for the moment, I am only interested in finding out what he does when I am not there. I see no reason why you and I should ever have to meet.

For reasons of security I do not wish you to reply to the address at which – for the moment – I am forced to reside with him.

Perhaps you would write to me care of the Post Office and let me know your rates and the kind of details you might need to help you begin the complex and probably unrewarding task of tracking the man to whom I am, unfortunately, married.

I look forward to hearing from you,

Never Again Once More by Morrison, Mary B.
Rhyme and Reason by Jo Ann Ferguson
Take the Key and Lock Her Up by Lena Diaz
Two Renegade Realms (Realm Walkers Book 2) by Donita K. Paul
Shadow on the Sun by David Macinnis Gill
Toss the Bride by Jennifer Manske Fenske
Wheel of Fortune by Cameron Jace
A Lesser Evil by Lesley Pearse
Touching Evil by Kay Hooper
Silk Confessions by Joanne Rock