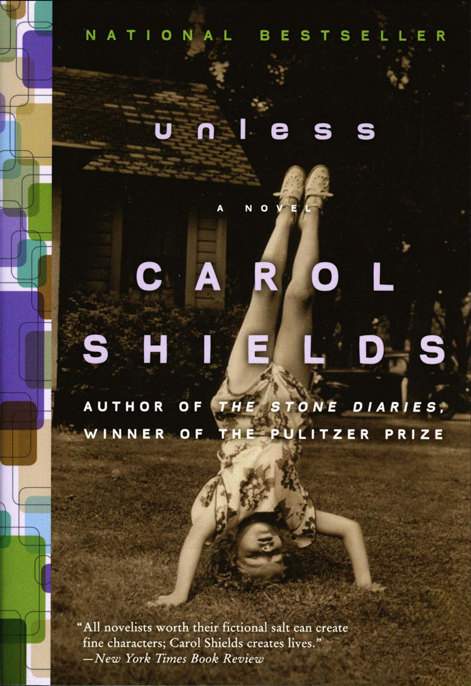 For Ezra and Jay

If we had a keen vision and feeling of all ordinary human life, it would be like hearing the grass grow and the squirrel’s heart beat, and we should die of that roar which lies on the other side of silence.

Other Books by Carol Shields

I
T HAPPENS THAT
I am going through a period of great unhappiness and loss just now. All my life I’ve heard people speak of finding themselves in acute pain, bankrupt in spirit and body, but I’ve never understood what they meant. To lose. To have lost. I believed these visitations of darkness lasted only a few minutes or hours and that these saddened people, in between bouts, were occupied, as we all were, with the useful monotony of happiness. But happiness is not what I thought. Happiness is the lucky pane of glass you carry in your head. It takes all your cunning just to hang on to it, and once it’s smashed you have to move into a different sort of life.

In my new life—the summer of the year 2000—I am attempting to “count my blessings.” Everyone I know advises me to take up this repellent strategy, as though they really believe a dramatic loss can be replaced by the renewed appreciation of all one has been given. I have a husband, Tom, who loves me and is faithful to me and is very decent looking as well, tallish, thin, and losing his hair nicely. We live in a house
with a paid-up mortgage, and our house is set in the prosperous rolling hills of Ontario, only an hour’s drive north of Toronto. Two of our three daughters, Natalie, fifteen, and Christine, sixteen, live at home. They are intelligent and lively and attractive and loving, though they too have shared in the loss, as has Tom.

And I have my writing.

And it’s true. There
is
a curious and faintly distasteful comfort, at the age of forty-three, forty-four in September, in contemplating what I have managed to write and publish during those impossibly childish and sunlit days before I understood the meaning of grief. “My Writing”: this is a very small poultice to hold up against my damaged self, but better, I have been persuaded, than no comfort at all.

It’s June, the first year of the new century, and here’s what I’ve written so far in my life. I’m not including my old schoolgirl sonnets from the seventies—Satin-slippered April, you glide through time / And lubricate spring days, de dum, de dum—and my dozen or so fawning book reviews from the early eighties. I am posting this list not on the screen but on my consciousness, a far safer computer tool and easier to access:

1. A translation and introduction to Danielle Westerman’s book of poetry,
Isolation
, April 1981, one month before our daughter Norah was born, a home birth naturally; a midwife; you could almost hear the guitars plinking in the background, except we did not feast on the placenta as some of our friends were doing at the time. My French came from my Québécoise mother, and my acquaintance with Danielle from the University of Toronto, where she taught French civilization in my student days. She was a poor teacher, hesitant and in awe, I think, of the tanned, healthy students sitting in her classroom, taking notes worshipfully and stretching their small suburban notion of what the word
civilization
might mean. She was already a recognized writer of kinetic, tough-corded prose, both beguiling and dangerous. Her manner was to take the reader by surprise. In the middle of a flattened rambling paragraph, deceived by warm stretches of reflection, you came upon hard cartilage.

I am a little uneasy about claiming
Isolation
as my own writing, but Dr. Westerman, doing one of her hurrying, over-the-head gestures, insisted that translation, especially of poetry, is a creative act. Writing and translating are convivial, she said, not oppositional, and not at all hierarchical. Of course, she
would
say that. My introduction to
Isolation
was certainly creative, though, since I had no idea what I was talking about.

I hauled it out recently and, while I read it, experienced the Burrowing of the Palpable Worm of Shame, as my friend Lynn Kelly calls it. Pretension is what I see now. The part about art transmuting the despair of life to the “merely frangible,” and poetry’s attempt to “repair the gap between ought and naught”—what on earth did I mean? Too much Derrida might be the problem. I was into all that pretty heavily in the early eighties.

2. After that came “The Brightness of a Star,” a short story that appeared in
An Anthology of Young Ontario Voices
(Pink Onion Press, 1985). It’s hard to believe that I qualified as “a young voice” in 1985, but, in fact, I was only twenty-nine, mother of Norah, aged four, her sister Christine, aged two, and about to give birth to Natalie—in a hospital this time. Three daughters, and not even thirty. “How did you find the time?” people used to chorus, and in that query I often registered a hint of blame: was I neglecting my darling sprogs for my writing career? Well, no. I never thought in terms of career. I dabbled in writing. It was my macramé, my knitting. Not long after, however, I did start to get serious and joined a local “writers’ workshop” for women, which met every second week, for two hours, where we drank coffee and had a good time and deeply appreciated each other’s company, and that led to:

3. “Icon,” a short story, rather Jamesian, 1986. Gwen Reidman, the only published author in the workshop group,
was our leader. The Glenmar Collective (an acronym of our first names—not very original) was what we called ourselves. One day Gwen said, moving a muffin to her mouth, that she was touched by the “austerity” of my short story—which was based, but only roughly, on my response to the Russian icon show at the Art Gallery of Ontario. My fictional piece was a case of art “embracing/repudiating art,” as Gwen put it, and then she reminded us of the famous “On First Looking Into Chapman’s Homer” and the whole aesthetic of art begetting art, art worshipping art, which I no longer believe in, by the way. Either you do or you don’t. The seven of us, Gwen, Lorna, Emma Allen, Nan, Marcella, Annette, and I (my name is Reta Winters—pronounced Ree-tah) self-published our pieces in a volume titled
Incursions and Interruptions
, throwing in fifty dollars each for the printing bill. The five hundred copies sold quickly in the local bookstores, mostly to our friends and families. Publishing was cheap, we discovered. What a surprise. We called ourselves the Stepping Stone Press, and in that name we expressed our mild embarrassment at the idea of self-publishing, but also the hope that we would “step” along to authentic publishing in the very near future. Except Gwen, of course, who was already there. And Emma, who was beginning to publish op-ed pieces in the
Globe and Mail
.

4.
Alive
(Random House, 1987), a translation of
Pour Vivre
, volume one of Danielle Westerman’s memoirs. I may appear
to be claiming translation as an act of originality, but, as I have already said, it was Danielle, in her benign way, wrinkling her disorderly forehead, who had urged me to believe that the act of shuffling elegant French into readable and stable English is an aesthetic performance. The book was well received by the critics and even sold moderately well, a dense but popular book, offered without shame and nary a footnote. The translation itself was slammed in the
Toronto Star
(“clumsy”) by one Stanley Harold Howard, but Danielle Westerman said never mind, the man was
un maquereau
, which translates, crudely, as something between a pimp and a prick.

5. I then wrote a commissioned pamphlet for a series put out by a press calling itself Encyclopédie de l’art. The press produced tiny, hold-in-the-hand booklets, each devoted to a single art subject, covering everything from Braque to Calder to Klee to Mondrian to Villon. The editor in New York, operating out of a phone booth it seemed to me, and knowing nothing of my ignorance, had stumbled on my short story “Icon” and believed me to be an expert on the subject. He asked for three thousand words for a volume (volumette, really) to be called
Russian Icons
, published finally in 1989. It took me a whole year to do, what with Tom and the three girls, and the house and garden and meals and laundry and too much inwardness. They published my “text,” such a cold, jellied word, along with a series of coloured plates, in both English and French (I did the French as well) and paid me four
hundred dollars. I learned all about the schools of Suzdal and Vladimir and what went on in Novgorod (a lot) and how images of saints made medieval people quake with fear. To my knowledge, the book was never reviewed, but I can read it today without shame. It is almost impossible to be pseudo when writing about innocent paintings that obey no rules of perspective and that are done on slabs of ordinary wood.

6. I lost a year after this, which I don’t understand, since all three girls had started school, though Natalie was only in morning kindergarten. I think I was too busy thinking about the business of being a writer, about being writerly and fretting over whether Tom’s ego was threatened and being in Danielle’s shadow, never mind Derrida, and needing my own writing space and turning thirty-five and feeling older than I’ve ever felt since. My age—thirty-five—shouted at me all the time, standing tall and wide in my head, and blocking access to what my life afforded. Thirty-five never sat down with its hands folded. Thirty-five had no composure. It was always humming mean, terse tunes on a piece of folded cellophane. (“I am composed,” said John Quincy Adams on his deathbed. How admirable and enviable and beyond belief; I loved him for this.)

This anguish of mine was unnecessary; Tom’s ego was unchallenged by my slender publications. He turned out not to be one of those men we were worried about in the seventies
and eighties, who might shrivel in acknowledgment of his own insignificance. Ordinary was what he wanted, to be an ordinary man embedded in a family he loved. We put a skylight in the box room, bought a used office desk, installed a fax and a computer, and I sat down on my straight-from-a-catalogue Freedom Chair and translated Danielle Westerman’s immense
Les femmes et le pouvoir
, the English version published in 1992, volume two of her memoirs. In English the tide was changed to
Women Waiting
, which only makes sense if you’ve read the book. (Women possess power, but it is power that has yet to be seized, ignited, and released, and so forth.) This time no one grumped about my translation. “Sparkling and full of ease,” the
Globe
said, and the
New York Times
went one better and called it “an achievement.”

“You are my true sister,” said Danielle Westerman at the time of publication.
Ma vraie soeur
. I hugged her back. Her craving for physical touch has not slackened even in her eighties, though nowadays it is mostly her doctor who touches her, or me with my weekly embrace, or the manicurist. Dr. Danielle Westerman is the only person I know who has her nails done twice a week, Tuesday and Saturday (just a touch-up), beautiful long nail beds, matching her long quizzing eyes.