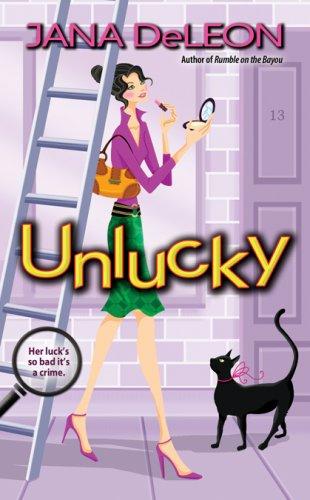 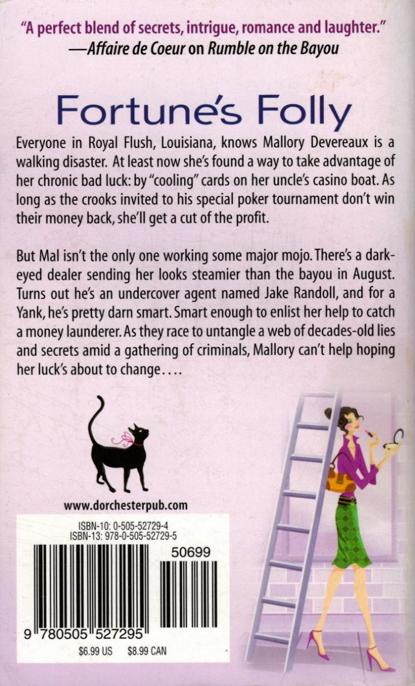 AND
RUMBLE ON THE BAYOUX

"
Rumble on the Bayou
is a wonderful, poignant and fun mystery...
Filled with likable and interesting individuals, this first-rate debut novel is
a truly fantastic read."

"Jana DeLeon's debut had me chuckling from the opening pages, and I never stopped laughing. It's a fresh, fast-paced, fabulously funny mystery where sexy blondes have brains, small towns swarm with crazy characters, and everyone's afraid of the gators!"

"A very impressive debut novel.
Rumble on the Bayou
kept me enthralled from the first page to the last!"

"Debut author Jana DeLeon has created a whole passel of down-to-earth, wonderful characters, and a page-turning, interesting mystery.
Rumble on the Bayou
is a perfect blend of secrets, intrigue, romance and laughter."

LUCK BE A LADY

Before she could respond to his cryptic words, Jake grabbed her shoulders and lowered his head to hers. His lips pressed against hers with an energy she'd never felt before--an energy that raced through every square inch of her body.

Her mouth responded as if completely separate from her mind, because certainly this wasn't a good idea, but damned if she could remember a reason why not. His lips parted and hers went right along with him, their tongues mingling in a sensual dance that made her moan.

Suddenly, he dropped his hands and stepped away. The desire on his face was plain as day, and Mallory could tell his self-control was as precarious as her own, body warring with mind in the endless battle of whether this was a good idea or a really bad one that felt like a really good one at the moment.

He stared at her for a moment, indecisive, then shoved the sliding door open and slipped inside, never even looking back.

She watched him, the heat from her body still radiating out every pore. She ought to have been angry, but instead she smiled. Jake McMillan had thought he'd grab a quick kiss to ensure a run of bad luck this afternoon. He'd thought he was being sneaky, but he'd gotten far more than he bargained for.

Other books by Jana DeLeon:

RUMBLE ON THE BAYOU 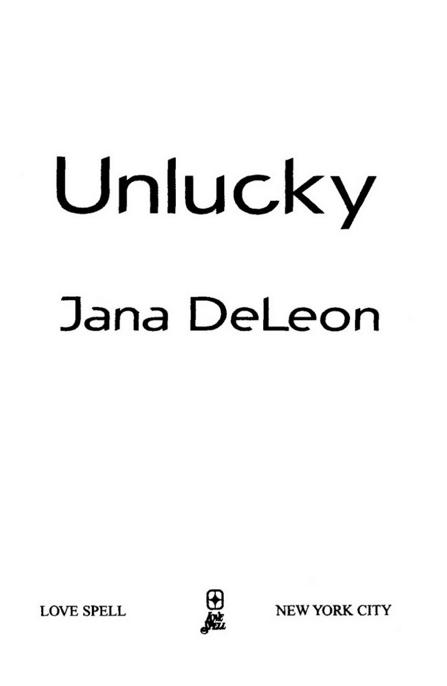 the strongest woman I've ever known.

Your faith humbles me even today.

If you purchased this book without a cover you should be aware that this book is stolen property. It was reported as "unsold and destroyed" to the publisher and neither the author nor the publisher has received any payment for this "stripped book."

The name "Love Spell" and its logo are trademarks of Dorchester Publishing Co., Inc.

Visit us on the web at www.dorchesterpub.com.

To my husband, Rene, for all of your support and for continuing to believe in me absolutely. To my incredible friend and critique partner, Colleen Gleason, for pushing me along when this book had me stuck and for always reminding me that I really can write--you are the best! To my friend Sarah Fogleman, for reminding me that this business couldn't kill me or my loved ones--even though it might have felt like it. To my critique partners Cari, Cindy and Kelly, for supporting my crazy story ideas and helping me polish them into publishable material. To the Non-Bombs, Diana, Wendy, Colleen and Elly, for your continued support. To my parents, Jimmie and Bobbie Morris, for all your support and marketing efforts--and a special thanks to God for looking out for my dad and ensuring he didn't get arrested for accosting strange women in Wal-Mart and telling them to buy my book. To my brother, Dwain, for being a chip off the old block and taking the same show to Barnes & Noble, and his wife, Donna, and my beautiful niece, KatiAnne. To my fabulous agent, Kristin Nelson, for helping make this book so much stronger. To the incredible art department at Dorchester--your covers are the absolute best on the market! To my wonderful editor, Leah Hultenschmidt, for ensuring that everything from the manuscript to the cover copy is absolutely perfect. And finally, to all the booksellers with an unfailing support of romance, and romance readers everywhere for making this the most popular genre in fiction.

Exhausted after a long day of work, Mallory Devereaux entered J.T.'s Bar on Thursday night intending to have a cold beer and a bit of relaxation. Then some misplaced Yankee challenged Father Thomas to a round of pool.

She had barely gotten the door closed behind her when her bayou neighbor, Scooter Duson, grabbed her arm and dragged her into the corner for consultation.

"I've got two hundred on Father Thomas to win this game," he said. "Those Yankees been taunting him most of the evening."

Mallory stared, certain Scooter had lost what was remaining of his rapidly disappearing brain cells. "Father Thomas has never played pool in his life. Why in the world would you put money on him?" She eyed the group of men in the far corner of the bar--midforties, beer bellies, cheap haircuts (on what hair was remaining), polyester shirts. They looked more like a bunch of out-of-work plumbers than the stockbroker image she had of the northern U.S. residents. The Yankees. "Those guys are probably hustlers. You know better."

Scooter had the decency to look a bit embarrassed. "I know, but damn, I couldn't just let them get one over on Father T. What kind of Catholic would I be if I didn't come to his defense?"

"The kind with two hundred dollars in his wallet?"

Scooter nodded, her sarcasm lost. "Exactly. That's why I need your help. I know you can turn it to the Father's favor."

She glanced one more time at the men in the corner and smiled. They
were
Yankees, after all, but did she really want to tackle something like that tonight? The energy she'd have to spend on this kind of project was probably better saved for something more important. And definitely better looking.

"What's in it for me?" she asked, not about to turn on the juice for nothing, especially when Scooter had gotten all the way in this one by himself. "Flirting with ugly guys should be worth something," she continued. "Besides, I'm probably going to have to touch him to ensure bad luck." She shuddered.

Scooter cast a glance back at the Yankee and grimaced. "Half," he said instantly. "A hundred for you, a hundred for me. Just fire your death ray or whatever it is."

Mallory laughed and headed toward an empty spot at the bar, signaling to J.T., the bar owner. She shrugged off her denim work shirt, exposing the tight white tank top underneath. She gave the thin, clingy cotton a good yank down, just enough to expose about an inch of cleavage, then pulled off her steel-toed work boots. Reaching up with one hand, she grabbed the pair of FMPs that J.T. had retrieved from behind the counter, where he kept them in reserve for just this kind of occasion. She eased on the shiny black shoes with the five-inch titanium heels, careful not to scratch them on the worn-out wood of the counter, and tugged down her jeans until they sat just a little bit lower on her hips, exposing the tiny silver hoop that glittered in her belly button.

Demonstorm: Heart of a Vampire #6 by Kallyn, Amber
Chaos by David Meyer
A Time for Home: A Snowberry Creek Novel by Alexis Morgan
Plantation Slaves by Powerone
The Gentlemen's Club Journals Complete Collection by Sandra Strike, Poetess Connie
Southern Living by Ad Hudler
Dark Prince by David Gemmell
Them by Nathan McCall
Visions of Isabelle by William Bayer
The Islanders by Pascal Garnier