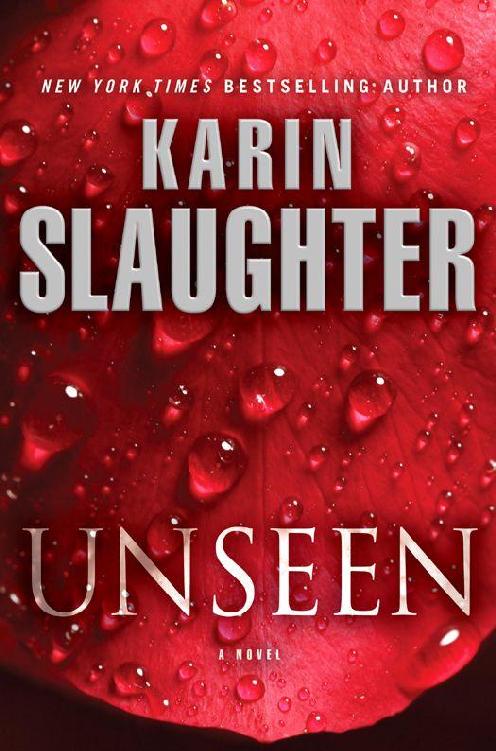 Unseen
is a work of fiction. Names, characters, places, and incidents either are the product of the author’s imagination or are used fictitiously. Any resemblance to actual persons, living or dead, events, or locales is entirely coincidental.

All rights reserved.
Published in the United States by Delacorte Press, an imprint of The Random House Publishing Group, a division of Random House, Inc., New York.

D
etective Lena Adams winced as she pulled off her T-shirt. She took her police badge out of her pocket, along with her flashlight and an extra clip for her Glock, and tossed them all onto the dresser. The time on her phone showed it was almost midnight. Lena had rolled out of bed eighteen hours ago and now all she wanted to do was fall back in. Not that she’d done that much lately. For the past four days, just about every waking hour had been wasted sitting at a conference room table answering questions she’d answered the day before and the day before that—navigating the usual bullshit that came from having to justify your actions to Internal Affairs.

“Who led the raid into the house?”

“What intelligence were you acting on?”

“What did you expect to find?”

The internal investigator for the Macon Police Department had the dour, lifeless personality of a career pencil pusher. Every day, the woman showed up dressed in the same style black skirt and white blouse, an outfit that seemed more appropriate for
greeting diners at an Olive Garden. She nodded a lot, frowned even more as she took notes. When Lena didn’t answer quickly, she’d check the tape recorder to make sure it was picking up the silences.

Lena was certain the questions were designed to provoke an outburst. The first day, she had been so numb that she’d just answered truthfully in the hope that it would soon be over. The second and third days, she’d been less forthcoming, her level of irritation rising with each passing minute. Today, she had finally exploded, which seemed exactly what the woman had been waiting for.

“What do you think I expected to find, you miserable bitch?”

If only Lena hadn’t found it. If only she could take a razor and slice the images out of her brain. They haunted her. They flickered into her vision like an old movie every time she blinked. They filled her with a constant, unrelenting sorrow.

Then there were the things that no one could see—Lena’s bruised tailbone. Her aching back and knees. The roil in her stomach every time she thought about what she’d discovered in that desolate house in the woods.

Four dead bodies. One man still in the hospital. Another who would never wear the badge again. Not to mention the terrible memory she would probably end up taking to her grave.

Tears came into Lena’s eyes. She bit her lip, fighting the urge to let the grief have its way. She was exhausted. The week had been hard. Hell, the last three weeks had been hard. But it was over now. All of it was over. Lena was safe. She would keep her job. The rat squad investigator had scurried back to her hole. Lena
was finally home where no one could stare at her, question her, probe and prod her. It wasn’t just Internal Affairs. Everyone wanted to know what the raid had been like, what Lena had found in that dark, dank basement.

And Lena wanted nothing more than to forget all about it.

Her cell phone chirped. Lena exhaled until her lungs were completely empty. The phone chirped a second time. She picked it up. There was a new text message.

Lena stared at the letters on the screen. Paul Vickery, her partner.

She tapped reply. Her thumb hovered over the keyboard.

The distant rumble of a motorcycle shook the air.

Instead of typing out a response, Lena held down the power button until the phone turned off. She placed it on the dresser beside her badge.

The roar of the Harley-D’s twin-cam engine vibrated in her ears as Jared gunned the bike so he could make it to the top of their steep driveway. Lena waited, following the familiar sounds: the engine cutting, the metallic groan of the kickstand, the heavy tread of boots as her husband made his way into the house, tossed his helmet and keys onto the kitchen table even though she’d asked him a million times not to. He paused for a moment, probably to check the mail, then continued toward their bedroom.

Lena kept her back to the door as she counted off Jared’s footsteps down the long hallway. His stride sounded tentative, reluctant. He’d probably been hoping Lena would be asleep.

Jared stopped at the doorway. He was obviously waiting for Lena to turn around. When she didn’t, he asked, “You just get in?”

“I stayed late to finish.” It wasn’t a complete lie. She’d hoped Jared would be asleep, too. “I was about to take a shower.”

Lena didn’t go into the bathroom. Instead, she turned to face him.

Jared’s gaze flickered down to her bra, then quickly back up again. He was dressed in his uniform, his hair twisted into a peak from the helmet. He was a cop with the Macon PD, too—a motorman, one rank below Lena and twelve years younger. Neither one of these things used to bother her, but lately, every inch of their lives was a provocation.

He leaned against the doorjamb, asking, “How’d it go?”

“They cleared me to go back to work.”

She replayed his words in her head, trying to decipher the tone. “Why wouldn’t it be?”

Jared didn’t respond. There was a long, uncomfortable silence before he asked, “You want a drink?”

“I guess it’s okay now, right?” He tilted his head to the side, forced his lips into a tight smile. He was a few inches taller than Lena, but his muscular frame and athletic grace made him seem larger.

Jared cleared his throat to let her know that he was waiting.

Jared left the room, but his need lingered—surrounding her, almost suffocating her. He
needed
for Lena to break down. He
needed
for her to lean on him. He
needed
her to show him that what happened had affected her, had altered her in some tangible way.

He couldn’t see that not giving in was the only thing that kept her from falling completely apart.

Lena took her pajamas out of the dresser. She heard Jared moving around the kitchen. He opened the freezer door, rummaged around for a handful of ice. Lena closed her eyes. Her body swayed. She waited for the cubes to hit glass. Her mouth watered in anticipation.

She clenched her jaw. Forced open her eyes.

She wanted the drink too badly. When Jared came back, she would put the glass down, wait a few minutes, prove to herself that she could do without it.

Prove to him that she didn’t need it.

Her hands ached as she unbuttoned her jeans. The day of the raid, she’d gripped her shotgun so hard that her fingers had felt like they were permanently curled. She wasn’t sure why everything still ached. She should be better now, but her body was holding on to the hurt. Holding on to the poison that was eating her up inside.

“So.” Jared was back. This time, he came into the room. He poured a large vodka as he walked toward her, the bottle gurgling as the liquid splashed into the glass. “You’re back on duty tomorrow?”

He handed her the glass. “No time off?”

Lena took the drink and downed half of it in one gulp.

“I guess that’s the same as when …” Jared’s voice trailed off. He didn’t have to say when. Instead, he looked out the back window. The dark panes showed his reflection. “I bet you get your sergeant’s stripes off this.”

She shook her head, but said, “Maybe.”

He stared at her—waiting. Needing.

She asked, “What are they saying at the station?”

Jared walked to the closet. “That you’ve got balls of steel.” He dialed the combination on the gun safe. Lena watched the back of his neck. There was a pink line of sunburn where his helmet didn’t protect the skin. He must’ve known she was watching, but he just took his holster off his belt and stored his gun beside hers. Near hers. He didn’t even let their guns touch.

She asked, “Does it bother you?”

He shut the safe door, spun the combination. “Why would it bother me?”

Lena didn’t say the words, but they were screaming in her head:
Because they think I’m tougher than you. Because your wife was taking down some very bad guys while you were toodling around on your bike giving tickets to soccer moms
.

Jared said, “I’m proud of you.” He used his reasonable voice, the one that made Lena want to punch him in the face. “They should give you a medal for what you did.”

He had no idea what she’d done. Jared only knew the highlights, the details Lena was allowed to share outside closed doors.

She repeated the question. “Does it bother you?”

He paused for a second too long. “It bothers me that you could’ve been killed.”

He still hadn’t answered the question. Lena studied his face. The skin was unlined, fresh. She’d met Jared when he was twenty-one, and in the five and a half years since, he’d somehow started looking younger, like he was aging in reverse. Or maybe Lena was getting older more quickly. So much had changed since those early days. In the beginning, she could always tell what he was thinking. Of course, since then, she’d given him plenty of mortar to build up a wall around himself.

He started unbuttoning his shirt. “I think I’m gonna go put those cabinets together.”

She gave a startled laugh. “Really?” The kitchen had been torn apart for three months, mostly because Jared found a new reason every weekend to not work on it.

He let his shirt drop to the floor. “At least Ikea will know I’m still the man of the house.”

Now that it was out there, Lena didn’t know how to respond. “You know it’s not like that.” Even to her own ears, the excuse sounded weak. “It’s just not.”

“Right.” Jared’s cell phone started to ring. He pulled it out of his pocket, checked the number, and declined the call.

Lost and Sound by Viola Grace
Some Like It Hot by Zoey Dean
The China Pandemic by A R Shaw
If the Shoe Fits by Sandra D. Bricker
All I Want for Christmas Is You (Short Story) by O'Keefe, Molly
V.J. Chambers - Jason&Azazel Apocalypse 01 by The Stillness in the Air
Apostle by Brad Thor
Slob by Rex Miller
Tucker’s Grove by Kevin J. Anderson
Scarlet Night (Limited Edition) by Megan Parker