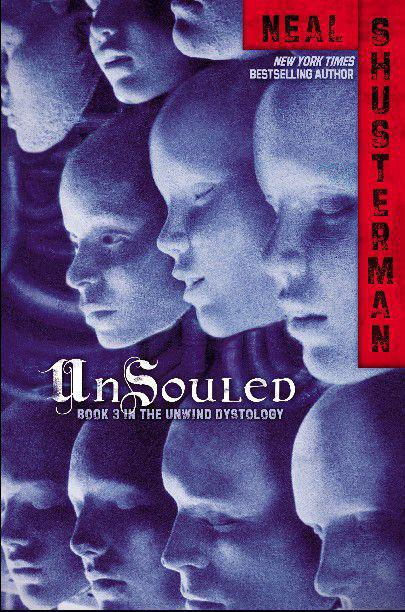 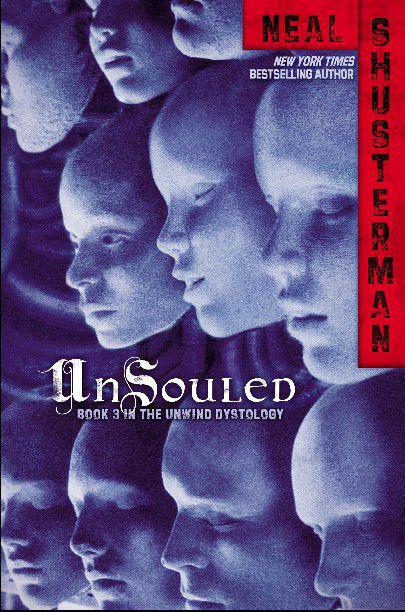 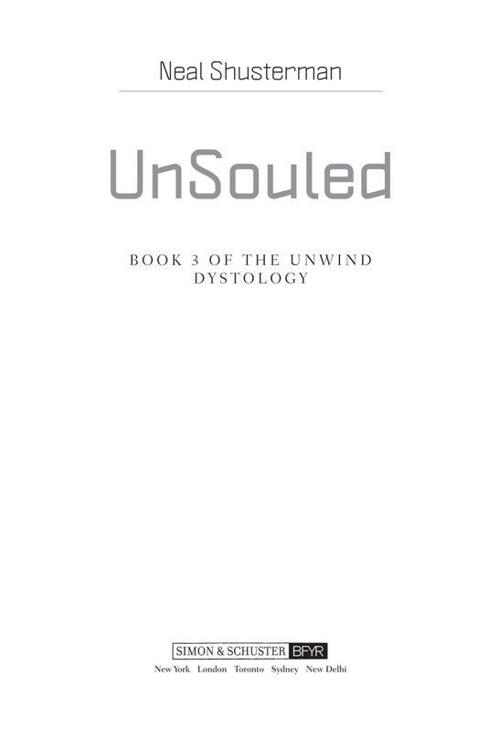 For Jan, Eric & Robby, Keith & Thresa, Chris, Patricia, Marcia, Andrea, Mark, and all of my friends, who were there when I needed them most

Like Camus Comprix, this book, and all the books and stories in the Unwind world, are given life by many people. First and foremost, I’d like to thank my editor, David Gale; associate editor, Navah Wolfe; and publisher, Justin Chanda, for their support, and for continuing to allow me to divide a sequel into a trilogy, and now into a four-book “dystology.” Many thanks to everyone at Simon & Schuster, including Jon Anderson, Anne Zafian, Paul Crichton, Lydia Finn, Michelle Fadlalla, Venessa Carson, Katrina Groover, and Chava Wolin. Many thanks also to Chloë Foglia who designed this wonderfully creepy cover!

I’d like to thank everyone who has supported me through this very eventful year—especially my children, Brendan, Jarrod, Joelle, and Erin; their mom, Elaine Jones; my “big sister,” Patricia McFall; my assistant, Marcia Blanco; and my good friend, Christine “Natasha” Goethals.

Thanks to the wonderful people who keep my career on track; my book agent, Andrea Brown; my entertainment industry agents, Steve Fisher and Debbie Deuble-Hill; my manager, Trevor Engelson; and my lawyers, Shep Rosenman and Lee Rosenbaum.

I am deeply indebted to Marc Benardout, Catherine Kimmel, Julian Stone, Charlotte Stout, and Faber Dewar, whose tireless efforts and belief in Unwind have resulted in a film deal for the entire book series—which couldn’t have happened without Robert Kulzer and Margo Klewans at Constantin Films, and their passion for these books.

Thanks to Michelle Knowlden, for her collaboration on “Unstrung,” and upcoming short stories in the Unwind world; Matthew Dierker and Wendy Doyle, for their work on my website; and Symone Powell, Tyler Hotlzman, Annie Wilson, Meara McNitt, Matthew Setzekorn, and Natalie Sommors, who began as fans and have gone on to help maintain a Facebook and Twitter presence for the Unwind world and its characters!

Cпасибо to Ludovika Fjortende and Michelle and Artie Shaykevich for translating Russian phrases, and to Stephanie Sandra Brown for her expertise in Portuguese.

And lastly owe a debt of gratitude to all the teachers and librarians who are bringing these books to kids and adults alike, as well as the readers and fans. It is your passionate word-of-mouth that makes all the difference in the world!

“Surely this new medical technology will free us rather than enslave us, for it is my firm belief that human compassion outweighs human greed. To that end, I hereby found Proactive Citizenry to be a stalwart watchdog over the ethical use of neurografting. I am confident that abuses will be the exception rather than the rule.”

“I am become death, the destroyer of worlds.”

“They signed it. The Heartland War is over.”

Janson Rheinschild closes the front door, throws his coat on the sofa, and collapses into an armchair, as if all his joints have become internally undone. As if he’s been unwound from the inside out.

“You can’t be serious,” Sonia says. “No one in their right mind would sign that hideous Unwind Accord.”

He looks at her with a bitterness that isn’t meant for her, but it has nowhere else to go. “Who,” he asks, “has been in their right mind for the past nine years?”

She sits on the arm of the sofa as close to him as she can get and takes his hand. He grasps it with a sort of desperation, as if her hand is the only thing keeping him from the abyss.

“The new chairman of Proactive Citizenry, that narcissistic weasel Dandrich, called me before they made any official announcement, to let me know the accord was signed. He said that I should know first ‘out of respect.’ But you know as well as I do, he did it to gloat.”

“There’s no sense torturing yourself, Janson. It’s not your fault, and there’s nothing you can do about it.”

He pulls his hand away from her and glares. “You’re right—it’s not my fault. It’s our fault. We did this together, Sonia.”

She reacts as if he’s slapped her across the face. She doesn’t just turn away from him. She gets up and moves away, beginning to pace the room.
Good,
thinks Janson.
She needs to feel a little bit of what I feel.

“I did nothing wrong,” she insists, “and neither did you!”

“We made it possible! Unwinding is based on our technology! Our research!”

“And it was stolen from us!”

Janson gets up from his chair, unable to bear even one sedentary moment. Sitting feels like acceptance. It feels like admitting failure. Next he’ll be lost in that armchair with a drink in his hands, swirling the ice to hear it clink, feeling the alcohol numbing him into submission. No, that’s not him. It will never be him.

There’s some shouting in the street. He looks out the living room window to see some neighborhood kids being rowdy with one another. “Ferals,” the news now calls them. Feral teens. “Something must be done about the feral teens this war has created,” the politicians bleat from their legislative pens. Well, what did they expect when educational funding was diverted to the war? How could they not know public education would fail? With no schools, no jobs, and nothing but time on their hands, what did they think these kids would do other than make trouble?

The mob in the street—barely a mob at all, numbering only four or five—passes without incident. They’ve never had trouble at their house even though theirs is the only home on the street without window bars and an iron security gate. On the other hand, several of the security doors on the street have been vandalized. These kids, they may be lacking in education since the school closures, but they’re not stupid. They see distrust all around them, and it makes them want to deliver their anger all the more. “How dare you distrust me?” their violence says. “You don’t know me.” But people are too wrapped up in their own fearful security measures to hear it.

Sonia comes up behind him now, wrapping her arms around him. He wants to accept her comfort, but can’t allow himself. He can’t be consoled or find a sense of peace until he’s undone this terrible wrong.

“Maybe it will be like the old Cold War,” Sonia suggests.

“How do you figure?”

“They have this new weapon,” she says, “unwinding. Maybe just the threat of it is enough. Maybe they’ll never actually use it.”

“A cold war implies a balance of power. What do these kids have if the authorities start unwinding them?”

Sonia sighs, finally seeing his point. “Not a chance in hell.”

Now at last he can take some comfort that she understands. That he’s not alone in seeing the murky depths to which this new law could lead
.

“It still hasn’t happened,” she reminds him. “Not a single feral teen has been unwound.”

“No,” Janson says. “Because the law doesn’t take effect until midnight.”

And so they decide to spend the rest of their evening together, holding each other close like it’s the last night of civilization. Because in a very real sense, it is.

It begins with roadkill—an act so random and ridiculous that it boggles the mind to consider the events to which it leads.

Connor should have pulled off the road to sleep—especially on a windy night like this. Certainly his reflexes behind the wheel would be much better in the morning, but the burning need to get himself and Lev to Ohio keeps pushing him harder each day.

Just one more exit on the interstate,
he tells himself, and although he had resolved to stop once they crossed into Kansas, that marker came and went half an hour ago. Lev, who is good at talking sense into Connor, is no help tonight, slumped in the passenger seat, fast asleep.

It’s half past midnight when the unfortunate creature leaps into Connor’s headlights, and Connor has enough time only to register a brief impression of it as he jerks the wheel in a desperate attempt to avoid a collision.

Even though he swerves wide, the stupid thing bolts right into the car’s path again as if it has a death wish.

The “borrowed” Charger slams into the creature, and it rolls over the hood like a boulder, shattering the windshield into a million bits of safety glass. Its body wedges in the windshield frame, with a twisted wiper blade embedded in its slender neck. Connor loses control of the steering wheel, and the car leaves the asphalt, careening wildly through the roadside chaparral.

He screams and curses reflexively, as the creature, still clinging to life, rips at Connor’s chest with its talons, tearing fabric and flesh, until finally Connor pulls enough of his wits together to slam on the brakes. The abominable creature dislodges from the windshield, launching forward as if shot from a cannon. The car keels like a sinking ship, comes to a sudden stop in a ditch, and finally the air bags deploy, like a faulty parachute opening upon impact.

The quiet that follows feels like the airless silence of space, but for the soulless moan of the wind.

Lev, who woke up the second they hit the thing, says nothing. He just gasps for the breath that was knocked out of him by the air bag. Connor has discovered Lev to be more of an opossum than a screamer. Panic makes him freeze.

Connor, still trying to process the previous ten seconds of his life, checks the wound in his chest. Beneath the tear in his shirt is a diagonal gash in his skin maybe six inches long. Oddly, he’s relieved. It’s not life-threatening, and flesh wounds can be dealt with. As Risa would have said when she ran the infirmary at the airplane graveyard, “Stitches are the least of all
evils.” This wound will take about a dozen. The biggest problem will be where a fugitive-presumed-dead AWOL can get medical attention.

Both he and Lev get out of the car and climb up from the ditch to examine their roadkill. Connor’s legs are weak and wobbly, but he doesn’t want to admit it to himself, so he concludes that he’s merely shaky from the adrenaline rush. He looks at his arm—the one with the shark tattoo—and pumps the hand into a fist, coopting the brutal strength of that stolen arm for the rest of his body.

“Is that an ostrich?” asks Lev, as they look down on the huge dead bird.

“No,” snaps Connor, “it’s the freaking Road Runner.” Which was actually Connor’s first irrational thought when the giant bird had first loomed in his headlights. The ostrich, which had still been alive enough to rip into Connor’s chest a minute ago, is now very dead. Its torn neck is twisted at a severe angle, and its glassy eyes stare at them with zombielike intensity.

“That was some bird strike,” Lev says. He seems no longer fazed by it, just observational. Maybe because he wasn’t driving, or maybe because he’s seen things far worse than a roadkill raptor. Connor envies Lev’s calm in a crisis.

Other Lives by Moreno-Garcia, Silvia
EnforcersCraving by DJ Michaels
The Island by Minkman, Jen
Dublin by Edward Rutherfurd
The Betrayers by Donald Hamilton
The Other Side of Someday by T. K. Leigh
Star Carol for Celeste by Karen Hall
Regarding Freemasonry: Everything You Wanted to Know About Masonic Conspiracies, by Bernard Schaffer
The Philip K. Dick Megapack by Dick, Philip K.
Claim Me by Anna Zaires