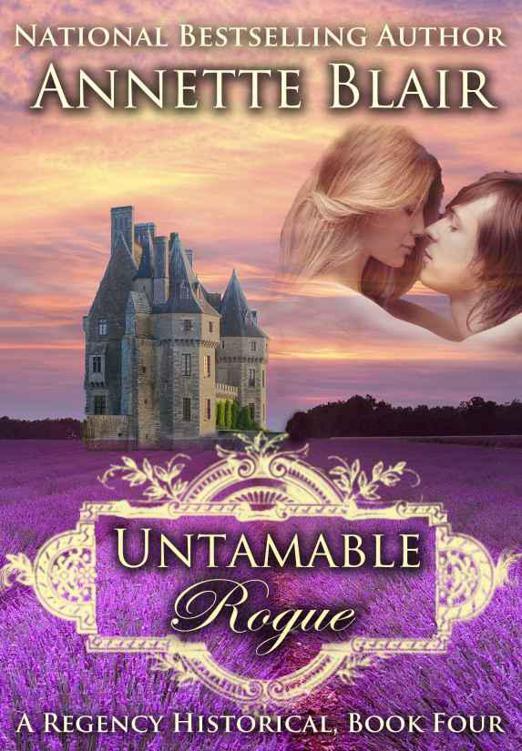 UNTAMABLE ROGUE, Rogues Club, Book Four
Ashford Blackburne, Fifth Earl of Blackburne, does not care where he marries and plants his seed, so long as he does both before Christmas when his tyrannical grandfather’s archaic ultimatum runs out. Jilted, drunk, and challenged to a high-stakes poker game, Ash loses the game, but wins the consolation prize: a guttersnipe bride and a wedding at gunpoint. For her part, Larkin McAdams has loved Ashford Blackburne since she was a child. She’ll make him a good wife. She does not need much—a cot, a warm blanket ... a monthly bath.

This is a historical work of fiction. Names, characters, places, and incidents either are the product of the author’s imagination or are used fictitiously, and any resemblance to actual persons, living or dead, events and establishments is entirely coincidental.

The scanning, uploading and distribution of this book via the internet, or via any other means, including those not yet invented, without the permission of the copyright owner, is illegal and punishable by law. Please purchase only authorized electronic editions. Your support of the author’s rights is appreciated.

Dedicated with a hundred Nana kisses,

And a world of love,

To whom knowledge is candy,

So we can barely keep up.

He speaks US Presidents, dinosaurs, cars, and trains.

Talks birds and fish, any animal you name.

He’ll be a scientist; I’m guessing,

Who knows? Who can say?

Watching him grow; it just makes my day.

Ashford Blackburne, Fifth Earl of Blackburne, did not care where he married and planted his seed, as long as he did both before Christmas, when his tyrannical grandfather’s archaic ultimatum ran out.

Awash in the stale scent of incense, aware of a mortifying rigidity in his spine, Ash fixed his gaze upon the claret marble altar before him, and acknowledged, if only to himself, the unlikelihood of his bride’s arrival.

Given his first jilt six years before—due to his lack of funds—Ash thought surely today’s bride would show, for he had paid her well to be here. But her absence proved her as greedy and dishonest as the rest. An actress of some talent—simply regard the way she’d taken his money and run—she might have played the role of loving wife well enough to satisfy even his grandfather’s skeptical eye.

Now he so obviously faced a second jilt that none but a strangled cough dared pierce the weighty silence behind him, only to be trapped in the gothic eaves, like a fluttering ribbon of echoes in an unending wave of mockery.

Ash glanced about, as if for escape, and though his groomsman, Myles Quartermaine, seemed loath to speak, the portly, plum-cheeked cleric stepped timidly forward. “My Lord, I … do believe that your bride—” The parson plucked at his strangling collar. “She must have—” He blotted his brow with a palsied hand and opened his mouth like a fretful fish.

Ash cursed and sent the vested craven scurrying from harm’s way like a crab before the tide while the resonance of his expletive filled the rafters, and the craven turned crimson.

“Devil it, Ash,” Myles whispered. “She has taken your money and run.”

Ash firmed his jaw. At this moment, he’d rather fight another horde of bayonet-wielding Frenchies than face any of his gossip-greedy guests. Nevertheless, he turned to regard the vultures. “There will be no wedding today,” he said, and before the surge of speculation broke, he’d stepped through the vestry arch, twice-jilted and thrice as furious.

The warble-voiced vicar barely offered a blessing before Ash cleared the north nave exit, leaving Myles to the mercy of its ravening jaws.

As the two reached the front of the huge steepled edifice, Hunter Elijah Wylder, Marquess of Wyldborne, another battle-scarred rogue of the club, quitted the church and fell into step beside them.

In a gesture of impotent fury, Ash waved off his coachman and together the three strode down Piccadilly and straight through the rotting portals of McAdams’s Pickled Barrel Inn. There they always ended when dissipation came to mind, and there they sat now to drink and forget the scandalbroth to come.

“McAdams,” Ash shouted. “Your best whisky, and bring the bottle.”

Larkin McAdams had seen him coming. Him—the man who’d filled her dreams since childhood, foolish, wistful, impossible dreams, he who dominated them since he lifted her from the floor, wiped her tears, kissed her scraped knuckles and called her a brave little lady—the most handsome and forthright being ever created: Ashford bloody-beautiful Blackburne.

If only he were not of the lowest and most feeble-brained of God’s creatures … a man. Practical to a fault, Lark sighed and admitted that for dreaming purposes, Ashford Blackburne’s manliness did not seem so much a failing, as an advantage. His male shortcomings paled in comparison to his masculine strengths, as exhibited by her nightly fancies, in which he played a leading role.

Ashford—as she dared call him in her mind—sat now in his favorite chair at his favorite corner table from which he liked to survey the room at large. And she, on the far side of the enclosed stair-wall behind him, sat on the bottom step, her temple against the rough wall board, as near to him as she dared get without being seen.

If she closed her eyes, she could ignore the stench of ale and tobacco about her and remember the special scent of him that day eleven years before, like the most exotic of spices. And when she did recall it, a yearning for more than she could ever have overtook her.

As always, she fought the pull. Being so near the object of her fancies never failed to rush her blood and pummel her heart with the kind of wild sentiment she hated, yet at this moment, there existed no place on this earth she would rather be.

Her dissatisfaction with life would pale with his departure, she knew, and reality would return, however rude and unpleasant, though her yearnings never seemed to end.

Lark slid to the floor just behind him and stretched her arm as far as she could reach, far enough to touch the hem of his frockcoat, bold unworthy creature that she was, and stroke its fine and fancy cloth between her callused fingers. Too greedy by half and ignoring the risk such abandon wrought, she slid her hand into his pocket, and out as fast, for nobody picked pockets better than she, not even her Da.

She palmed a silver snuffbox with curls that might be letters cut into it, a glove the color of wheat, and a perfumed lady’s calling card. Lark’s jaw set at the sweet, cloying scent of the card, but she brought Ash’s butter-soft kid glove to her face, let the wash of his nearness shiver through her, and forgave him. ‘Twas the spicy scent she remembered from that long-ago day mixed with a strong touch of … lavender, as if he’d crushed a sprig in his gloved hand.

Lark slipped the calling card between the stair treads and watched it disappear from sight with utter satisfaction. Ash was only a man, after all—human, weak, selfish and self-serving, like the rest—but kinder than most, infinitely more honorable, and much, much better on a poor maiden’s eyes.

Lark pushed the remainder of her bounty into her trousers’ pockets and sat in the stairwell so long, her legs cramped. The drinkers, Ash and his two cronies, at first rowdy, then silent, then morose, in turn, called for three more bottles, then three more.

For a while dust motes danced in the slant of daylight piercing the grimy bay window near Lark’s perch, then the light changed direction, lost its brilliance, and disappeared altogether.

Ash stopped swilling whisky long enough to belch and grin, and Lark was glad he was coming out of his sulks. Something must have gone terribly wrong, for Ashford Blackburne could be a rogue of a charmer when the world went his way.

The friend he called Myles caught his mood, winked, and slapped him on the back. “You’re running out of time to get you a bride, old boy.”

Ash clutched his friend’s neck cloth and pulled him strangling close. “No bloody fooling,” Ash said with another belch and another charming grin.

“God’s teeth,” Myles said, pulling from Ash’s hold and loosening his neck cloth. “If
you
cannot persuade someone to marry you—”

Ash growled at that and Myles reared from harm’s way. “I
meant
… what the bloody chance do I have, I’d like to know?”

What Dread Hand? by Christianna Brand
CaddyGirls by V. K. Sykes
Thorns by Robert Silverberg
Dangerous Beauty: Part Three: This is War by Michelle Hardin
By Its Cover by Donna Leon
Eye of the Abductor by Elaine Meece
Silverblind (Ironskin) by Tina Connolly
Whiplash by Catherine Coulter
Keeping Her Up All Night by Anna Cleary
The Dance Begins by Diane Chamberlain