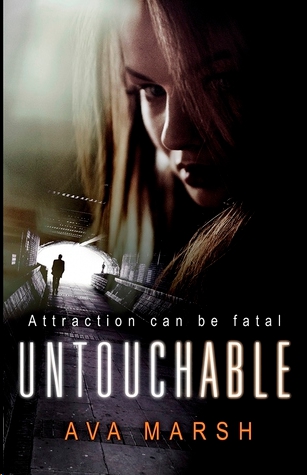 For JR. And everyone else I’ve neglected while writing this.

Gonna keep this short and sweet. Big thanks to everyone who helped launch Grace into the world, particularly my agent Mark Stanton, for his boundless enthusiasm, patience, and sage advice. Also my lovely editors at Transworld: Frankie Gray, Katy Loftus, Rachel Rayner and Kate Samano. And Claire Ward for her outstanding artwork. Thanks also to the rest of the team at Transworld, who’ve worked so hard behind the scenes to make sure you’re reading this now.

The temperature in the room drops several degrees. The breath catches in my throat and I swallow hard.

He knows my name.

He knows my fucking name.

‘Why are you here?’ I ask, struggling to keep any trace of fear from my voice. ‘What do you want?’

He smiles, finally, but it has no warmth in it. ‘I came to deliver something, Grace.’ His tongue sliding over my name, caressing it.

He raises his hand, and I flinch, but he strokes my cheek.

‘A message from Michael.’

The hand drifts lower to my neck. He stares deep into my eyes, his features giving nothing away as his grip around me tightens, his fingers digging into my skin while his thumb traces the line of my throat. At the base, in the hollow where it joins my chest, he presses down. Not enough to stop me breathing. Just hard enough to make me very afraid indeed.

My pulse starts to sing in my head, and all I can feel is the constriction in my throat, this man’s breath on my cheek as he leans in and whispers three words in my ear. Three words like punches, like a kick to the guts.

You expect more the first time you turn a trick. You hear about women who throw up the moment the client walks out the door. Some resort to hysterics, or the bottle. Others are overcome with remorse, resolving never to do it again.

In my case, nothing. He came. He came – eventually. And then he left.

Sliding the lock behind him, I felt no more than a vague sensation of having lost my virginity all over again. I walked into the bathroom and examined my face in the mirror above the sink. Searching, as after fumbled, hasty, anticlimactic sex at fifteen, for clues to what had changed.

Not much, it seemed. Same sleek dark hair, though underneath eyes more weary two decades on. The hint of a wrinkle I allowed to elude my focus, this not being the time for self-doubt.

So that’s that, I told my reflection. You’ve sold yourself for money. You’re a whore, Grace Thomas, a prostitute, a hooker, a harlot, a working girl.

I released myself from my own gaze, feeling slightly numb and slightly elated. I’d crossed the line and there was no going back.

Once a tart, always a tart. Another thing I’d never live down.

Forget violent clients or venereal disease, the true scourge of working girls is tax returns – at least for those of us who bother to file one. How to describe your business, for instance? The get-out clause on every independent escort’s website – being paid purely for ‘time and companionship’ – won’t wash with the Inland Revenue.

I opt for my standard evasion: personal therapist – vague enough to obscure the real source of my earnings, truthful enough to pass muster should anyone dig deeper. Grabbing my calculator and diary, I tot up my appointments. Three hundred and thirty-six hours at an average of £250 per hour gives me an income last year of …
blimey
… a gratifying £84k.

That’s before expenses, of course. I tap my pen against my teeth, trying to remember what I can claim for. Condoms and lube, certainly. Cost of website and updating photographs, yes. Taxi fares – probably.

And how much for working from home? Assess how many rooms you use for business, suggests one website, and for what proportion of the day. Hmm. I see around half my clients as in-calls, here at my flat. So if I spend around seven hours a night sleeping in my bedroom and, say, an average of three or four a week fucking in it, what proportion does that make for business use?

And what about the lounge? If I screw someone on the sofa, does that count as using the room for work purposes?

The trill of my mobile cuts through my ruminations. I check the screen – a London landline. I answer on the fourth ring.

‘Stella?’ He sounds American. Or possibly Canadian – I can never tell the difference.

‘My name is Gerald. I wonder if you might be free this afternoon. For an hour?’

I think for a moment. I should really get this done – the deadline’s in a few days. ‘Where?’ I ask.

I check the clock on my phone. It’s nearly one. ‘What time?’

‘I was hoping two o’clock. Does that suit?’

Another set of calculations. An hour to finish this – or at least wrestle it into submission. Five minutes to eat. Ten to shower and run a razor over all the bits that count. Add ten to dress and slap on some make-up, fifteen to dash to Boots for more condoms, and at least twenty to get to the hotel.

‘Three would be better,’ I say.

He hesitates. ‘Three o’clock is too late. A quarter after two?’

I inhale, make up my mind. Tax dodging it is.

At exactly 2.15 p.m. I’m standing outside Room 759, savouring my last few seconds off the clock. And the anticipation. You never quite get over it, having no idea who’s about to appear at the door, knowing in just a matter of minutes you’ll be as intimate as two people can be. Suspense has proved an enduring aphrodisiac.

The door swings open to reveal a tall, slim man with an unexceptional face. Probably in his early fifties, judging by the lines around his eyes and the recession in his hairline. Though his teeth as he greets me are improbably white – I’m guessing he’s had them bleached.

Gerald Archer stands aside to let me in. I give the place a quick once-over. The room is larger than a standard suite, the bed flanked by two dark, solid bedside tables. The curtains and walls are all muted beige; even the art print on the wall confines itself to tasteful neutrals.

Meanwhile Gerald conducts his own evaluation, his face expressionless as he takes me in. I smile, but he barely responds, and I wonder with a slight lift in my stomach if this is going to be one of those occasions when a client gets cold feet. It happens sometimes. A crisis of conscience, perhaps; or simply a case of not particularly liking what he sees.

I hover in the middle of the room, waiting for some kind of reaction. Gerald’s lips lengthen into a tight smile. ‘Would you like a drink?’

He nods. Pours himself a Scotch from a bottle on the desk. Takes a sip and sets the glass back down.

‘You warm enough?’ He gestures towards the thermostat on the far wall.

‘Thanks, I’m fine.’ To prove the point I remove my jacket, folding it over the back of one of the armchairs.

Gerald eyes me again as the TV chatters away in the background. He makes no move to switch it off, but then I’ve lost count of the number of North American clients who think it’s perfectly normal to screw to a soundtrack of CNN.

‘I apologize for it being rather last minute,’ he says finally.

‘No problem.’ I’m wondering now if I’m here because another girl cancelled.

‘I wasn’t sure of my schedule, you see. Not till this morning.’ His lips barely move as he speaks, giving his face a shifty look. I glance at his feet. He’s wearing red socks, a blaze of colour in a room full of understatement.

I relax a little. Perhaps I was actually his first choice.

Gerald picks up the whisky glass and downs the remainder, then steps towards me and plants his mouth on mine.
Cut to the chase, why not?
I taste the Scotch on his breath, and beneath it something more pungent. Garlic, maybe. I repress the urge to draw away. This, after all, is what I’m paid for – the willing suspension of disgust.

‘I’ve been looking forward to fucking you,’ he murmurs, drawing back, eyes locking with mine. His are the kind of blue that fades with age, surrounded by heavy lids that echo the hint of jowls along his jawline. Otherwise, he’s not too bad. Handsome even – or at least was once.

‘Do you mind?’ I nod towards the TV. He reaches for the remote and switches it off, then slips an arm around my waist, dropping his head to kiss my neck.

No awkward small talk. No inane attempts to make this feel like anything other than it is.

He releases me and I bend to unzip my boots, then take his hand and lead him to the bed. We undress each other quickly. He pushes me on to the pristine white sheets, burying his head in my crotch, his tongue drumming against my clitoris with an insistence that makes me flinch.

He doesn’t take the hint. I endure it for a minute or so, then fake an orgasm. Nothing showy. You don’t have to go all
When Harry Met Sally
. A hitch in your breath, a couple of urgent gasps, a final undulating moan – that usually does the trick.

Gerald lifts his head, chin glistening, eyes glinting with satisfaction. Nothing flatters a client more than thinking they’ve got you off; it’s the challenge, perhaps, or the reassurance. They may pay for every minute of your time, but most want to believe you’re enjoying it as much as them.

And sometimes I am. Just not today.

‘One second.’ I slip off the bed and grab a condom from my bag, tossing it on the bedside table. It’s then I notice the book – an Anne Tyler novel, the one about the couple who marry during the war. Next to it a pair of reading glasses, lilac with small diamante chips on the outside of the frames. The type only a woman would wear.

Why not hide them, I wonder. A simple omission, possibly, or is he trying to make me uncomfortable? I consider asking, then remind myself I’m not his therapist; I’m here to deal with his cock, not his cognitive style.

No wonder he was so antsy about the time. I feel a wave of revulsion, and drag my focus back to his erection. Cocks, in themselves, are rarely repellent. It’s easier to hide your antipathy if you concentrate on this – the business end – rather than the dick it’s attached to.

Jack Adrift by Jack Gantos
Truthseekers by Mike Handcock
Unsympathetic Magic by Resnick, Laura
Recklessly by A.J. Sand
Once Burned: A Night Prince Novel by Jeaniene Frost
Let Them Have Cake by Pratt, Kathy
The Killin' Fields (Alexa's Travels Book 2) by Angela White
Cruzada by Anselm Audley
The Sicilian by Mario Puzo
My Name Is Leon by Kit de Waal