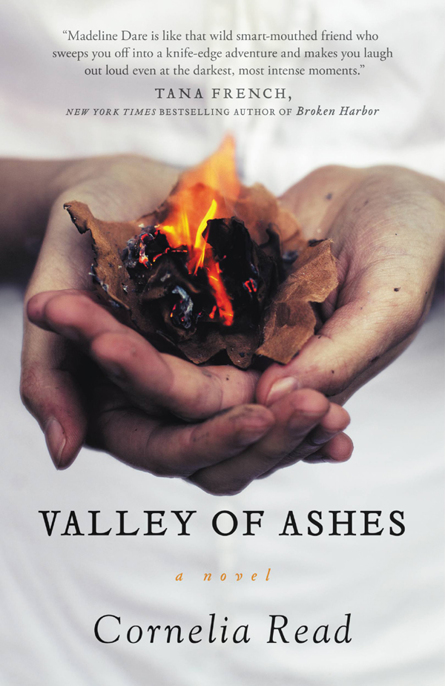 For Frederick Harvey Read and Rick Dage
Requiescat in pace et in amore.

[A]fter a child is born the lives of its mother and father diverge, so that where before they were living in a state of some equality, now they exist in a sort of feudal relation to each other. A day spent at home caring for a child could not be more different from a day spent working in an office. Whatever their relative merits, they are days spent on opposite sides of the world.

—Rachel Cusk,
A Life’s Work: On Becoming a Mother

W
hen we first moved to Boulder, I was entirely too happy—a state of being so rare in my experience that I found it rather terrifying.

My twin daughters, Parrish and India, were beautiful, precocious, and brimming with good health. My husband, Dean, was happily successful at his new job and my best, most trusted friend. We lived at the eastern feet of the Rocky Mountains in a cozy old house on the loveliest street of a charming university town.

The air was fresh, the sky was blue—our yard a lush and maple-shaded green, our mellow brick front porch banked in the early spring with a cobalt-and-amethyst embarrassment of lilac, iris, and grape hyacinth.

Everything I’d ever wanted, not least the fleeting belief that Boulder might heal the halves of me, split since childhood between New York and California.

Sorrow is always your own, offering no temptation to fickle gods. Fucking joy, on the other hand? You might as well string your heart from the ceiling for use as a frat-party piñata.

We’d lived in Colorado for three months now, and somehow everything about my marriage had shifted. Not in a good way.

Dean traveled a great deal for work, and when he was home he no longer liked me very much.

I didn’t know why, exactly, but it was hard for me to blame him: Most days, I didn’t like me a whole hell of a lot, either.

I was exhausted. And lonely. And really shitty at the whole housewife thing. And just so fucking
sad
, even though I loved my kids and Dean with great fierceness and should’ve been overjoyed with my fabulous luck, right?

It was just… well, I had this constant creeping terror that I didn’t deserve any of the good parts, that I wasn’t holding up my end of the bargain. That fear wafted across the bottom of everything, like dry-ice mist rippling along the floor of some cheesy horror-movie set.

And also I should’ve been eating nothing but salads and taking up jogging or something. Plus washing my hair more often.

But mostly I really, really wanted to be able to sleep for three straight days.

I often found myself thinking of this French kid, Pascal. We’d met one college summer while I was crashing in Eliot House at Harvard with some pals who were actually attending classes there.

Pascal gave himself an odd punky haircut in his dorm room one day with a razor trimmer before wandering around Boston Common for an afternoon, thereby enduring catcalls of derision from every last roving gang of blue-collar youth.

He used to be cool
, Pascal said of himself that night in dining hall,
but now they call him “Maggot Head.”

Lately, those words had echoed in my brain every time I looked in the mirror.

Snotty Parisian accent and all.

The Flatirons jut up at the western end of Colorado’s high plains. Boulder’s bookend: a crooked row of five-hundred-foot shark’s teeth, tipped vertical eighty million years ago by the cataclysmic upthrusts that had whelped the Rockies.

You really couldn’t miss them, from any vantage point in town.

I’d only ever lived away from the ocean once before, but this time I was determined not to bitch about it.

I pulled my daughters toward Pearl Street in their little red covered wagon, my throat dry in the thin mile-high air.

We were buffeted, as usual, by random clots of joggers, bikers, and Rollerbladers—obsessive jocks with an o’erweening sense of entitlement being as ubiquitous on the sidewalks of Boulder as those pompous blowhard leveraged-buyout guys and their calcium-deprived blond wives had been in the better restaurants of Manhattan.

I’d let my driver’s license lapse while we lived in New York, but hadn’t been in any great hurry to set up a DMV appointment out here to regain one. Joggers aside, Boulder had a terrific pedestrian culture, and we were only a couple of blocks’ walk from nearly everything one could want downtown. Plus it was sunny 330 days a year here, on average, and I figured having to walk instead of ride most of the time wasn’t going to do my ass any aesthetic harm.

Dean and I usually did big grocery runs on the weekend, and me not driving also meant that he had to pitch in on that front.

The only time it sucked was when he was out of town and I needed supplies in a hurry. I was fighting my way toward Pearl Street just then because my husband was at a sales conference in New Orleans and I’d ripped a giant hole in my very last extant vacuum bag while trying to empty it into the kitchen garbage so I could use it over again.

Not that I was addicted to vacuuming or anything, but my mother was due to arrive around lunchtime in the camper she was driving across the country and my house looked like a complete shithole.

Well, okay, my house
usually
looked like a complete shithole. I just wanted my mother to think I’d made some progress, on that front at least.

Mom Lewis-and-Clarking from sea to shining sea at the wheel of her little beige secondhand Chinook meant that she and my father were both currently members of what Dad had long ago christened “the In-Car Nation.” As far as I knew, this was the first thing they’d had in common since their 1967 divorce.

For her it was a lark. Dad, meanwhile,
lived
in his VW van. He was probably the only homeless guy in America to have voted for Reagan. Twice.

It was two days before Parrish and India’s first birthday, hence Mom’s imminence, and I also was expecting my bestest pal Ellis to show up with her own two children the following day.

I was kind of hoping the pair of them could help me figure out what the hell had gone wrong with my marriage. Or, better yet, tell me everything was totally fine and I was just being weird and paranoid for no reason at all, and then maybe let me nap a lot.

The Radio Flyer’s metal handle bit into my palm. I peeked under its little white hooped-canvas roof to make sure the girls remained happily engrossed in their respective fistfuls of soggy Cheese Nips. They grinned up at me, laughing, rosy little cheeks bedizened with orange crumbs.

I had dressed them that morning in brightly contrasting turtlenecks, cotton jumpers, and striped tights—with blue jean jackets and miniature biker boots.

“Sweetness and light,” I said, reaching into the wagon to stroke India’s glossy dark hair and Parrish’s skimpy blond fuzz, then soldiered on across Spruce at Sixteenth.

The sky was a saturated Easter-egg turquoise and it was seventy degrees out even though the sidewalks were edged with snow.

Up here, the sunlight packed a wallop you never found at sea level. Everything looked sharper, cleaner, because there wasn’t as much atmosphere to buffer the rays.

I muscled the wagon up an awkwardly angled curb cut, past a row of newspaper racks. The
Daily Camera
’s headline praised local firefighters for their quick response when someone torched two cars out on Arapahoe.

I kind of hated the
Camera
, since I’d sent them my clips and résumé when we first moved here and got a curt and badly xeroxed form-rejection postcard in reply—not even the simple courtesy of “You suck so profoundly we wouldn’t employ your illiterate lack-talent ass if you were the lone hack to survive a pan-galactic nuclear apocalypse,
neener neener
,” on actual letterhead.

I reached into the next box and grabbed the
Boulder New Times
, a free weekly that hadn’t yet ruled me out.

Something to live for.

On the off chance I’d ever find employment with these guys, I’d taken to stockpiling issues in a downstairs broom closet.

Ten feet past the bollards demarcating Pearl Street’s pedestrianized stretch, a brand-new red Saab convertible’s tires squealed slowly against the curb: stoner parking. It still had paper dealer plates on, but there was already a
MEAN PEOPLE SUCK
sticker affixed to the custom ski rack.

The car’s front doors popped open and two dreadlocked, PataGucci-fleeced white boys tumbled onto the sidewalk in a Lilith Fair billow of clove cigarette and patchouli.

The tall kid began torturing passersby with tuneless moans on a nose flute.

A demand, not a question.

“Dividend checks late again?” I asked, dragging my wagon in a wide arc around his expensively sneakered feet.

Yeah, so much for that whole not-being-a-bitch thing.