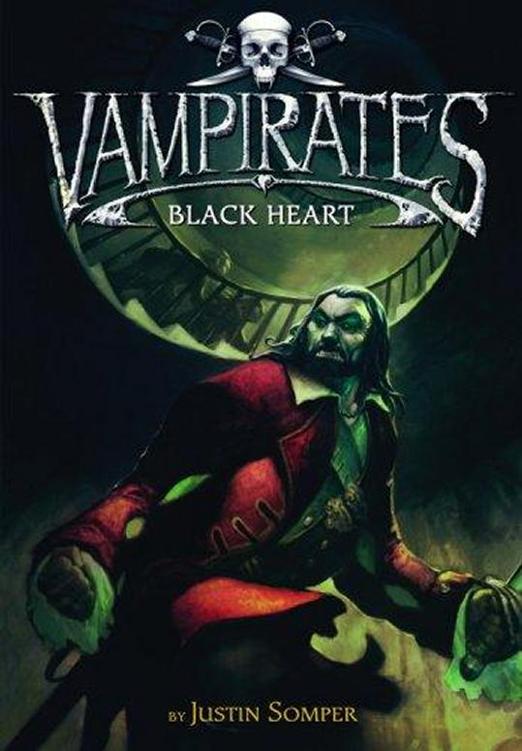 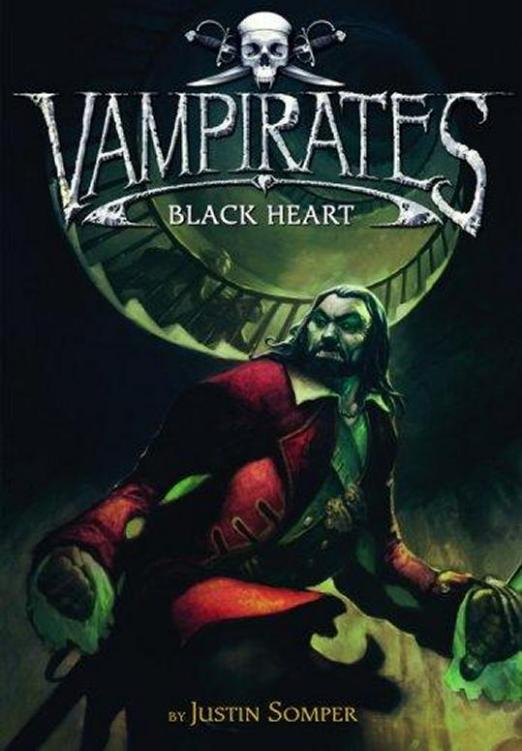 For Peejay, for too many reasons to list here.

Chapter One: INTRUDERS IN THE FORTRESS

It was a calm, clear night. The Typhon charted its course through the ocean, sleek and confident as a killer whale. On deck, the pirates of the night watch performed their duties with time-honored precision. Belowdecks, their crewmates variously rested, ate, relaxed, and prepared for the business of the next day. The Typhon was a well-oiled machine, from the crow's nest to the galley, from the lowliest of pirate apprentices to the captain and his deputy.

In one of the smaller but nevertheless grand staterooms two levels below the main deck, four people sat around a circular table. The table was covered with a red silk cloth, from which arose a structure resembling the four walls of a fortress. Each wall was composed of small tiles, half wood, half bone, stacked tightly together. But evidently this miniature fortress was not impenetrable. The walls had been ravaged. Some of the tiles had made their way onto racks placed in front of each wall while other tiles lay bone side up on the table revealing an array of intricate colored symbols.

"Well," said Trofie Wrathe, a golden finger tapping the wooden rack in front of her. "This is fun, isn't it?"

"I think it's a marvelous game," said the elderly man on Trofie's other side.

Trofie nodded encouragingly. "Thank you, Transom. I believe it's your turn now."

"Is it?" The Wrathes' trusty majordomo seemed confused for a moment. Then he reached forward and, with quivering fingers, removed a tile from the wall. Turning the bone side toward him, he drew it up to his eyes to examine the symbol more closely.

Moonshine sighed loudly. "Get a move on, Grandpa!" he hissed.

His father gave him a stern look.

Transom dropped the tile to his rack and, with a sudden burst of energy, began shuffling the other tiles around as if he was performing an elaborate conjuring trick.

"Remind me," Moonshine piped up again. "Why exactly are we torturing ourselves in this particularly grim fashion?"

Barbarro sighed, shook his head, and lifted a glass of honey-colored liquid to his lips.

Trofie smiled pleasantly. "Tuesday night is family night, min elskling. It was my idea, as you well know. I don't feel we've been spending enough time together." There was steel in her voice as she continued. "That's all going to change now."

In response, Moonshine rolled his eyes.

Trofie glared first at her son and then at her husband. "Will you say something to your son?"

"I'm having a wonderful time," Trofie said, a wide grin immediately appearing on her face. "And so is Transom."

The majordomo was still rearranging the tiles on his rack. As he did so, his face went through a series of contortions. Suddenly, his fingers ceased their miniature ballet. He looked up and gave a little smile.

"Bravo!" cried Trofie, clapping her hands. She did not make much sound since one of her hands was crafted from gold, the other of regular flesh -- but her delight was plain to see. "Well played, Transom!" she said. "I think you're getting the hang of this." She glanced around the room. "Well, now, shall we set up for another game?"

"No!" boomed Barbarro and Moonshine in unison. For once, they had found something to agree upon.

"All right," said Trofie, clearly deflated. "What shall we do next?"

"You tell us, Mom," said Moonshine. "Family night is your gig."

"If I might be so bold," Transom began, "I could have the cook prepare a light meal for you?"

"Yes," said Trofie, nodding. "That would be lovely. Perhaps some gravlax, with cloudberries and cream?"

"Very good, madam," said the ancient retainer, rising to his feet and heading toward the door.

After Transom had left, Barbarro rose and lifted a decanter, refilling first Trofie's glass and then his own.

"Share the wealth, eh, Dad?" Moonshine said, grinning as he reached for a glass.

Barbarro shook his head and put the cut-glass stopper back in the decanter.

"But it's family night!" Moonshine persisted. "The one night of the week where we share and share alike."

"Don't push it any further than you already have, my boy," said his father, sitting back down. He reached for his wife's hand and tentatively caressed the golden fingers with their ruby nails. "We've given this a good go, Trofie, but what's the use in kidding ourselves? I could really do with going over those charts again. Would you mind --"

"Yes," said Trofie, abruptly withdrawing her hand. "Yes,min elskling, I would mind very much. No one is leaving this room. We're going to spend quality time as a family if it kills us." She folded her arms defiantly.

Barbarro grunted. Moonshine mimed stabbing himself in the heart and slumped, fake dead, on his chair. And that's how they sat -- in complete, suffocating silence -- until there was a knock at the door.

The relief in the room was audible. "Come in, Transom," called Trofie.

The door opened, and a vast domed silver tray came into view.

"I thought you said a 'light meal,'" Trofie laughed, but the smile froze on her lips when she saw that it wasn't Transom who had brought the tray. It was carried by a tall figure dressed in a dark cloak and hood.

"Who are you? What's going on?" Barbarro exclaimed as the figure set the tray down on the table. Two more cloaked figures came into the cabin. They closed the door and stood like sentries on either side of it.

"I asked you a question," Barbarro boomed. "Who are you?"

In answer, the first figure threw back her hood, shook out her long dark hair, and smiled at the three Wrathes. She was a strikingly beautiful woman with wide brown eyes and razor-sharp cheekbones. Slightly to the side of her plump lips was a delicate beauty spot. Around her right eye was makeup -- or perhaps a tattoo -- in the shape of a black heart.

"Is it necessary that I ask you a third time ..." Barbarro began.

At last the stranger spoke. "We're from the Oceanic League for the Defense of Elderly Retainers, O-L-D-E-R," she said in a clipped English accent. "It's high time you hired some younger staff, isn't that right, ladies?"

Her two companions smiled enigmatically as they pushed back their own hoods. They were younger women, both as strikingly beautiful as their mistress. Like her, they each had a black heart shape inked around one eye, though in their case it was on their right side.

"Seriously, who are you?" Barbarro persisted. "No one comes aboard the Typhon without an invitation."

"Is that so?" said the stranger. "Well, I've never been the kind of girl to wait for an invitation, the kind of girl who stays home and pines for the phone to ring." She laughed. "Not my style. I mark my own dance card, so to speak."

Moonshine grinned. There was something decidedly cool about this woman. And though she called herself a girl, from where he was standing, she was all woman. Her two companions were just as gorgeous. Whoever they were -- whatever their business -- they had certainly saved family night from being a complete washout.

"Well," said the stranger. "It's quite an honor to at last make the acquaintance of the great Wrathe family."

"You have us at a disadvantage," said Trofie, polite but steely. "You know who we are, but we still have no clue as to your identity."

The woman removed her gloves to reveal long, delicate fingers, each sharp nail painted black. "My name," she said, her clipped accent somehow reminiscent of cut glass, "is Lady Lola Lockwood. And these are my crewmates, Marianne and Angelika."

"Crewmates?" said Trofie. "So you come from another ship?"

"Yes," nodded Lady Lockwood. "Not one as grand as the Typhon, I'll be the first to admit, but we call it home, don't we, ladies?"

Marianne and Angelika nodded. Their smiles gave little away.

Trofie moved across the room toward Lady Lockwood, her eyes never leaving the stranger. "I don't believe I've heard of you," she said with some finality.

"That doesn't surprise me," replied Lady Lockwood. "I'm a vagabond, you see. Born of high birth, some would say. Oh, yes, the silver spoon was very firmly planted in my mouth. But really, that was an awfully long time ago, and it has little bearing on who I am now and how I choose to pass my time."

"Which is?" Trofie countered. Now the two women stood face-to-face, as if looking in a mirror, one that utterly distorted its reflection. The women were of similar height and, each in her own way, beautiful. But Lady Lockwood was as dark as Trofie Wrathe was icily blonde.

Lady Lockwood exchanged an amused glance with each of her comrades. "A pirate," she said. "Well, yes. That's part of it."

"Get to the point," said Barbarro, growing impatient. "It's been a long night already, and I don't have the appetite for any more games."

Lady Lockwood gave a dismissive laugh. "Spoilsport," she said. "I've always rather enjoyed games. That's what comes of being the only daughter of aristocrats, locked up in a damp, crumbling castle for days on end with no taste for tapestry --"

"I mean it," Barbarro said. "Get to the point or I will." With that, he drew his rapier and extended it menacingly toward her.

"Oh, dear," said Lady Lockwood a little sadly. "And I had so hoped we were going to be friends."

She laughed once more, glancing at Marianne and Angelika. Her two colleagues joined in, as if the three of them were sharing a private joke. Their laughter grew deeper and deeper, mutating from an expression of pleasure into a darker, more predatory sound. It was then that Moonshine Wrathe noticed the curiously long and dangerously sharp canine teeth protruding from each of their pretty mouths.

"Are you ..." he asked huskily, his voice disappearing before he finished the question. "Are you ..." Once more words failed him.

"Are we thirsty?" asked Lady Lockwood, smiling at him pleasantly. "Yes, my darling boy, we are very, very thirsty. Now, what can you offer us in the way of a drink?"

"How long do you think they'll keep us waiting?"

Grace smiled at her brother. "My answer hasn't changed from the last time you asked me, three minutes ago. I just don't know."

Connor found the anteroom intensely claustrophobic. It was alien to him being in a room with no windows. Even the smallest cabins on board the Diablo had sported a porthole or two, giving some glimpse of the world outside. The best this room could offer was a painting, the large, square canvas positioned as if to simulate a casement.

The whole of the Sanctuary compound induced feelings of claustrophia in Connor. He thought of the succession of winding corridors that marked the start of the journey underground. First the Corridor of Lights with its sickly-sweet-smelling butter lamps. Then the Corridor of Discards or, as Connor had renamed it, the Corridor of Junk. The walls of this corridor were lined with shelves barely visible beneath their loads of bric-a-brac. They gave off an old, musty scent. Grace had informed him that these artifacts belonged to Vampirates who came to Sanctuary for healing. This thought made little sense to him. Surely you either were a vampire or you weren't? And, if you were, there was no way to be healed.

The third corridor was the Corridor of Ribbons and as you walked along it multicolored strands of cloth brushed your hair and eyes. Grace had told him, rather breathlessly, that the ribbons were incredibly powerful, that they contained the emotions of the inmates. But to Connor, they were just old, faded bits of cloth which, hanging so close to the lights, seemed something of a fire hazard.