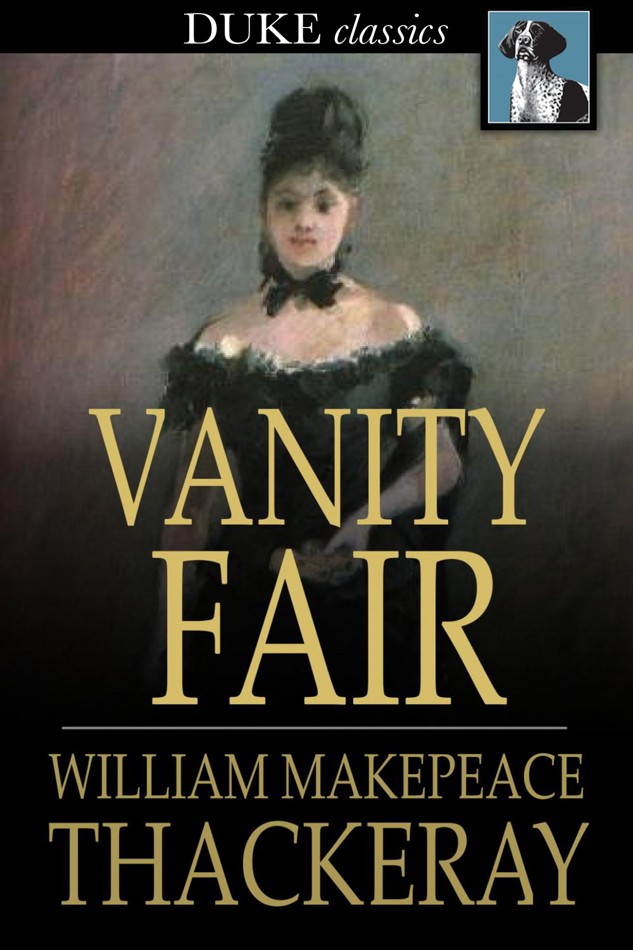 VANITY FAIR
A NOVEL WITHOUT A HERO
* * *
WILLIAM MAKEPEACE THACKERAY

As the manager of the Performance sits before the curtain on the
boards and looks into the Fair, a feeling of profound melancholy
comes over him in his survey of the bustling place. There is a great
quantity of eating and drinking, making love and jilting, laughing
and the contrary, smoking, cheating, fighting, dancing and fiddling;
there are bullies pushing about, bucks ogling the women, knaves
picking pockets, policemen on the look-out, quacks (OTHER quacks,
plague take them!) bawling in front of their booths, and yokels
looking up at the tinselled dancers and poor old rouged tumblers,
while the light-fingered folk are operating upon their pockets
behind. Yes, this is VANITY FAIR; not a moral place certainly; nor a
merry one, though very noisy. Look at the faces of the actors and
buffoons when they come off from their business; and Tom Fool
washing the paint off his cheeks before he sits down to dinner with
his wife and the little Jack Puddings behind the canvas. The
curtain will be up presently, and he will be turning over head and
heels, and crying, "How are you?"

A man with a reflective turn of mind, walking through an exhibition
of this sort, will not be oppressed, I take it, by his own or other
people's hilarity. An episode of humour or kindness touches and
amuses him here and there—a pretty child looking at a gingerbread
stall; a pretty girl blushing whilst her lover talks to her and
chooses her fairing; poor Tom Fool, yonder behind the waggon,
mumbling his bone with the honest family which lives by his
tumbling; but the general impression is one more melancholy than
mirthful. When you come home you sit down in a sober,
contemplative, not uncharitable frame of mind, and apply yourself to
your books or your business.

I have no other moral than this to tag to the present story of
"Vanity Fair." Some people consider Fairs immoral altogether, and
eschew such, with their servants and families: very likely they are
right. But persons who think otherwise, and are of a lazy, or a
benevolent, or a sarcastic mood, may perhaps like to step in for
half an hour, and look at the performances. There are scenes of all
sorts; some dreadful combats, some grand and lofty horse-riding,
some scenes of high life, and some of very middling indeed; some
love-making for the sentimental, and some light comic business; the
whole accompanied by appropriate scenery and brilliantly illuminated
with the Author's own candles.

What more has the Manager of the Performance to say?—To acknowledge
the kindness with which it has been received in all the principal
towns of England through which the Show has passed, and where it has
been most favourably noticed by the respected conductors of the
public Press, and by the Nobility and Gentry. He is proud to think
that his Puppets have given satisfaction to the very best company in
this empire. The famous little Becky Puppet has been pronounced to
be uncommonly flexible in the joints, and lively on the wire; the
Amelia Doll, though it has had a smaller circle of admirers, has yet
been carved and dressed with the greatest care by the artist; the
Dobbin Figure, though apparently clumsy, yet dances in a very
amusing and natural manner; the Little Boys' Dance has been liked by
some; and please to remark the richly dressed figure of the Wicked
Nobleman, on which no expense has been spared, and which Old Nick
will fetch away at the end of this singular performance.

And with this, and a profound bow to his patrons, the Manager
retires, and the curtain rises.

While the present century was in its teens, and on one sunshiny
morning in June, there drove up to the great iron gate of Miss
Pinkerton's academy for young ladies, on Chiswick Mall, a large
family coach, with two fat horses in blazing harness, driven by a
fat coachman in a three-cornered hat and wig, at the rate of four
miles an hour. A black servant, who reposed on the box beside the
fat coachman, uncurled his bandy legs as soon as the equipage drew
up opposite Miss Pinkerton's shining brass plate, and as he pulled
the bell at least a score of young heads were seen peering out of
the narrow windows of the stately old brick house. Nay, the acute
observer might have recognized the little red nose of good-natured
Miss Jemima Pinkerton herself, rising over some geranium pots in the
window of that lady's own drawing-room.

"It is Mrs. Sedley's coach, sister," said Miss Jemima. "Sambo, the
black servant, has just rung the bell; and the coachman has a new
red waistcoat."

"Have you completed all the necessary preparations incident to Miss
Sedley's departure, Miss Jemima?" asked Miss Pinkerton herself, that
majestic lady; the Semiramis of Hammersmith, the friend of Doctor
Johnson, the correspondent of Mrs. Chapone herself.

"The girls were up at four this morning, packing her trunks,
sister," replied Miss Jemima; "we have made her a bow-pot."

"Well, a booky as big almost as a haystack; I have put up two
bottles of the gillyflower water for Mrs. Sedley, and the receipt
for making it, in Amelia's box."

"And I trust, Miss Jemima, you have made a copy of Miss Sedley's
account. This is it, is it? Very good—ninety-three pounds, four
shillings. Be kind enough to address it to John Sedley, Esquire,
and to seal this billet which I have written to his lady."

In Miss Jemima's eyes an autograph letter of her sister, Miss
Pinkerton, was an object of as deep veneration as would have been a
letter from a sovereign. Only when her pupils quitted the
establishment, or when they were about to be married, and once, when
poor Miss Birch died of the scarlet fever, was Miss Pinkerton known
to write personally to the parents of her pupils; and it was
Jemima's opinion that if anything could console Mrs. Birch for her
daughter's loss, it would be that pious and eloquent composition in
which Miss Pinkerton announced the event.

In the present instance Miss Pinkerton's "billet" was to the
following effect:—

MADAM,—After her six years' residence at the Mall, I have the
honour and happiness of presenting Miss Amelia Sedley to her
parents, as a young lady not unworthy to occupy a fitting position
in their polished and refined circle. Those virtues which
characterize the young English gentlewoman, those accomplishments
which become her birth and station, will not be found wanting in the
amiable Miss Sedley, whose INDUSTRY and OBEDIENCE have endeared her
to her instructors, and whose delightful sweetness of temper has
charmed her AGED and her YOUTHFUL companions.

In music, in dancing, in orthography, in every variety of embroidery
and needlework, she will be found to have realized her friends'
fondest wishes. In geography there is still much to be desired; and
a careful and undeviating use of the backboard, for four hours daily
during the next three years, is recommended as necessary to the
acquirement of that dignified DEPORTMENT AND CARRIAGE, so requisite
for every young lady of FASHION.

In the principles of religion and morality, Miss Sedley will be
found worthy of an establishment which has been honoured by the
presence of THE GREAT LEXICOGRAPHER, and the patronage of the
admirable Mrs. Chapone. In leaving the Mall, Miss Amelia carries
with her the hearts of her companions, and the affectionate regards
of her mistress, who has the honour to subscribe herself,

P.S.—Miss Sharp accompanies Miss Sedley. It is particularly
requested that Miss Sharp's stay in Russell Square may not exceed
ten days. The family of distinction with whom she is engaged,
desire to avail themselves of her services as soon as possible.

This letter completed, Miss Pinkerton proceeded to write her own
name, and Miss Sedley's, in the fly-leaf of a Johnson's Dictionary—
the interesting work which she invariably presented to her scholars,
on their departure from the Mall. On the cover was inserted a copy
of "Lines addressed to a young lady on quitting Miss Pinkerton's
school, at the Mall; by the late revered Doctor Samuel Johnson." In
fact, the Lexicographer's name was always on the lips of this
majestic woman, and a visit he had paid to her was the cause of her
reputation and her fortune.

Being commanded by her elder sister to get "the Dictionary" from the
cupboard, Miss Jemima had extracted two copies of the book from the
receptacle in question. When Miss Pinkerton had finished the
inscription in the first, Jemima, with rather a dubious and timid
air, handed her the second.

"For whom is this, Miss Jemima?" said Miss Pinkerton, with awful
coldness.

"For Becky Sharp," answered Jemima, trembling very much, and
blushing over her withered face and neck, as she turned her back on
her sister. "For Becky Sharp: she's going too."

"MISS JEMIMA!" exclaimed Miss Pinkerton, in the largest capitals.
"Are you in your senses? Replace the Dixonary in the closet, and
never venture to take such a liberty in future."