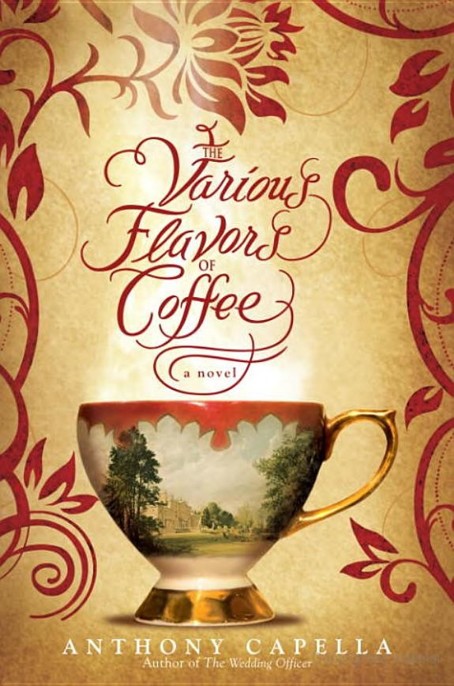 This book has been optimized for viewing at a monitor setting of 1024 x 768 pixels
.

The Food of Love The Wedding Officer

the various flavors of coffee

A Division of Random House, Inc.

a drop of semen, tomorrow

a handful of spice or ashes

Much about coffee’s flavor still remains a mystery.

ho is he, this young man who strolls toward us

down Regent Street, a carnation in his collar and a cane in his hand? We may deduce that he is well off, since he is dressed in the most fashionable clothes—but we would be wrong; we may deduce that he likes fine things, since he stops to look in the win-dow of Liberty, the new department store devoted to the latest styles—or is that simply his own reflection he is admiring, the curling locks that brush his shoulders, quite unlike the other passersby? We may deduce that he is hungry, since his footsteps speed up noticeably as they take him toward the Café Royal, that labyrinth of gossip and dining rooms off Piccadilly; and that he is a regular here, from the way he greets the waiter by name, and takes a
Pall Mall Gazette
from the rack as he moves toward a table. Perhaps we may even conclude that he is a writer, from the way he pauses to jot something down in that calfskin-leather pocket-book he carries.

Come along; I am going to introduce you. Yes, I admit it—I know this ludicrous young man, and soon you will know him, too. Perhaps after an hour or two in his company you will consider you

know him a little too well. I doubt that you will like him very much: that is of no consequence, I do not like him very much my-self. He is—well, you will see what he is. But perhaps you may be able to see past that, and imagine what he will become. Just as cof-fee does not reveal its true flavor until it has been picked, husked, roasted and brewed, so this particular specimen has one or two virtues to go along with his vices, although you may have to look a little harder to spot them. . . . Despite his faults, you see, I retain a sort of exasperated affection for the fellow.

The year is 1896. His name is Robert Wallis. He is twenty-two years old. He is me, my younger self, many years ago.

n 1895 I had been sent down from Oxford, having failed
my Preliminary Examinations. My expulsion surprised no one but myself: I had done little work, and had chosen as my associates young men notable for their idleness and dissolution. I learned very little—or perhaps it is fairer to say that I learned too much; those were the days, you will recall, when undergraduates chanted Swinburne as they rioted down the High
—Could you hurt me, sweet lips, though I hurt you?
Men touch them, and change in a trice
The lilies and languors of virtue / For the raptures and roses of vice—
and the college servants still talked in shocked tones of Pater and Wilde. Among the monkish cloisters a mood of languid romanticism prevailed, which prized beauty, youth and indolence above all things, and the young Robert Wallis imbibed this dangerous doctrine along with all the other heady aromas of the place. I spent my afternoons writing poetry, and my father’s allowance on silk waistcoats, fine wines, brilliant peacock feathers, slim volumes of verse bound in yellow vellum, and other
objets
essential to the artistic life, all of which were available on ready credit from the tradesmen of the Turl. Since my talent for poetry, like my allowance, was

actually rather more meager than I cared to acknowledge, it was inevitable that this state of affairs would eventually come to a sorry end. By the time I was sent down I had exhausted both my funds and my father’s patience, and I was soon faced with the necessity of finding a source of income—a necessity which, I am ashamed to say, I intended to ignore for as long as possible.

London at that time was a great, seething cesspit of humanity; yet, even in that dung-heap, lilies grew—indeed, they flourished. Out of nowhere, it seemed, there had come upon the capital a sud-den outpouring of frivolity.The Queen, in mourning, had retired from public life. Released from her attention, the Prince began to enjoy himself, and where he led, the rest of us followed. Courtiers mingled with courtesans, dandies moved among the
demi-monde,
aristocrats dined with aesthetes, and rough trade mixed with roy-alty. Our house magazine was the
Yellow Book;
our emblem was the green carnation; our style was what came to be known as
nouveau,
and our mode of speech was the epigram—the more paradoxical the better, preferably tossed into the conversation with a certain practiced, weary melancholy. We celebrated the artificial above the natural, the artistic above the practical, and, Oscar Wilde notwithstanding, laid claim to extravagant vices which few of us had any intention of actually indulging. It was a glorious time to be young and in London, and I was to miss most of it—curse it!— all because of a chance remark I happened to make in the hearing of a man named Pinker.

The primary factor affecting the taste is the selection of the beans.

was having breakfast in the Café Royal—a plate of oys-
ters and a dish of thickly sliced ham with green sauce—when the waiter brought my coffee.Without looking up from my newspaper I drank some, frowned, and said, “Damn it, Marsden, this

“It’s ver same as all ver other customers is drinking,” the waiter said haughtily.“None of vem, as I’m aware, have seen the necessity for complaint.”

“Are you saying I’m pernickety, Marsden?” “Will there be anyfink else, sir?”

“And yes, I am pernickety. For a well-made cup of coffee is the proper beginning to an idle day. Its aroma is beguiling, its taste is

sweet; yet it leaves behind only bitterness and regret. In that it resembles, surely, the pleasures of love.” Rather pleased with this
aperçu,
I again sipped the coffee that Marsden had brought. “Although in this case,” I added,“it seems to taste of nothing much except mud.With, perhaps, a faint aftertaste of rotten apricots.”

“I don’t doubt it.” I turned my attention back to the
Gazette.

The waiter lingered a moment. “Will ver young gentleman be paying for his breakfast this morning?” he inquired, with just a trace of fashionably weary melancholy.

“On my tab, please, Marsden.There’s a good fellow.”

A
FTER
a while
I became aware that someone had joined me at my table. Glancing over my newspaper, I saw that my companion was a small gnome-like gentleman, whose sturdy frock coat marked him out from the usual swells and dandies who frequented that place. I was myself expecting to be joined at any moment by my friends Morgan and Hunt, but since the hour was early and the room mostly unoccupied, it would be no great inconvenience to move to another table when they arrived. I was, however, somewhat curious, since the same surfeit of tables made it all the more surprising that the stranger should sit at mine uninvited.

“Samuel Pinker, sir, at your service,” the gnome-like gentleman said, with a slight inclination of his head.

“I could not help overhearing your remark to that waiter. May I?”And without further ado he reached for my cup, raised it to his nostrils, and sniffed it as delicately as I had that morning sniffed the flower I had chosen for my buttonhole.

I watched him, unsure whether to be wary or amused. Many eccentric characters frequented the Café Royal, to be sure, but their eccentricity was generally of a more affected kind, such as

carrying a posy of violets, wearing velvet knickerbockers or twirling a diamond-topped cane. Smelling another customer’s cof-fee was, so far as I knew, unheard of.

Samuel Pinker seemed unperturbed. His eyes half closed, he inhaled the aroma of the coffee twice more, very deliberately. He put it to his lips and sipped it.Then he made a curious sucking sound, together with a tiny snake-like flicker of his tongue, as if he were swilling the liquid around his mouth.

“Neilgherry,” he said regretfully.“Over-brewed, not to mention over-roasted. You are quite right, though. Part of the batch was spoiled. The taste of rotting fruit is faint, but quite pronounced. May I ask whether you are in the trade?”

“Why, the coffee trade.”

I think I laughed out loud.“Good heavens, no.”

“Forgive me—I should have said, what is your profession?”

“I do not profess anything very much. I am neither a doctor, nor a lawyer, nor anything useful.”

“What do you
do,
sir?” he said impatiently. “How do you support yourself?”

The truth was that I did not support myself just then, my father having recently advanced me a further small sum against literary greatness, with strict injunctions that there would be no more. However, it seemed absurd to quibble over definitions. “I am a poet,” I confessed, with a certain weary melancholy.

“A famous one? A great one?” Pinker asked eagerly.

“Alas, no. Fame has not yet clasped me to her fickle breast.” “Good,” he muttered, surprisingly. Then: “But you can write?

You can use words well enough?”

“Confound these epigrams!” Pinker cried. “I mean—can you describe? Well, of course you can.You described this coffee.”

“Exactly.” Pinker gave me a look that reminded me of my Oxford tutor—a look which combined doubt with a certain steely determination.“Enough talk. I am going to give you my card.”

“I shall certainly accept it,” I said, mystified,“although I believe I am unlikely to have need of your services.”

He was scribbling something briskly on the back of his business card. It was, I could not help noticing, a rather fine card, made of thick ivory paper. “You misunderstand me, sir. It is
I
who have need of
you.
”

“You mean, as some kind of secretary? I’m afraid I—”

Pinker shook his head.“No, no. I have three secretaries already, all extremely proficient in their duties.You, if I may say so, would make a very poor addition to their number.”

“What, then?” I asked, somewhat piqued. I had absolutely no desire to become a secretary, but I had always liked to believe that I was capable of it should the occasion arise.

“My need,” Pinker said, looking me in the eye, “is for an aesthete—a writer. When I have found this gifted individual, he will join me in an enterprise which will make fantastically wealthy men of us both.” He handed me the card. “Call on me at this address tomorrow afternoon.”

I
T WAS
my friend
George Hunt’s opinion that the mysterious Mr. Pinker intended to start a literary magazine.As it had long been an ambition of Hunt’s to do exactly that—principally because no ex-