Read Venice in the Moonlight Online

Venice in the Moonlight 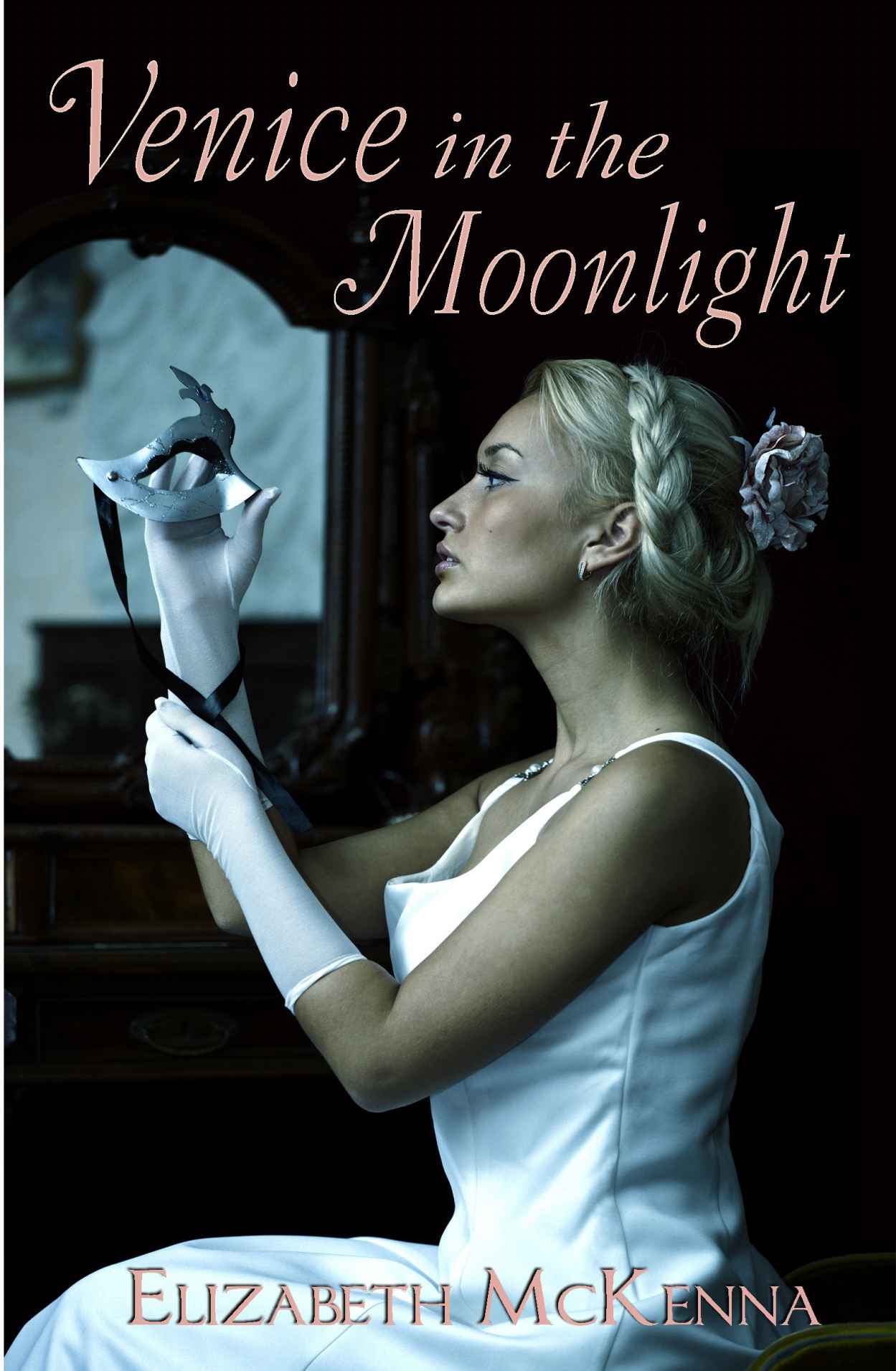 Venice in the Moonlight
is a work of fiction. Names, characters, places, and incidents either are the product of the author’s imagination or are used fictitiously. Any resemblance to actual persons, living or dead, events, or locales is entirely coincidental.

All rights reserved. No part of this publication may be reproduced or transmitted in any form or by any means, electronic or mechanical, including photocopy, recording, or any information storage and retrieval system, without permission in writing from the publisher. Please do not participate in piracy of copyrighted materials in violation of the author’s rights.

arietta Gatti smashed a pea with the back of her silver spoon. Across the mahogany dining table, her husband Dario’s unfaithful eyes simmered with lust as the young maid served the evening meal. When the girl replenished his crystal wine glass, his fingertips brushed against her skin, lingering longer than well-bred manners allowed. Marietta fisted the linen napkin in her lap while Dario’s parents, sitting on opposite ends of the table, ignored the antics of their only child.

The maid’s rosy cheeks and full pouty lips reflected the child she once was, but her body showed the curves of the woman she would be. Dario liked them young, naíve, and fully ripe for the picking—as a barely fifteen-year-old Marietta was when they first met.

Drawn to his thick, dark eyelashes and heavy coin purse, these girls came willingly to Dario. Six . . . seven . . . eight . . . Marietta crushed a pea for each dalliance in their five long years of marriage. When she finished the tally, only two peas remained whole. At least his affairs kept him out of her bed most nights.

Admittedly, she welcomed his affections at first, considering she was the daughter of an artist who hadn’t painted in two years. Dario courted her as any other respectable nobleman would with nights at the opera in Venice and strolls by the Grand Canal on Sunday afternoons. However, he couldn’t conceal his faults forever, and when they became obvious, she wanted no part of the man. By then, it was too late. Her father insisted a bad marriage was better than starvation, and she couldn’t change his mind.

Dario’s disrespect bothered her the most. Her father cherished her mother until the devastating day that she died when Marietta was only thirteen. She assumed her own marriage would be the same, full of love and laughter, but it wasn’t. Now, she spent her days and nights trying to survive the cold-heartedness of the Gatti family.

Marietta relaxed the grip on her napkin and pushed at the lamb on her plate. When bloody juice oozed from the meat, she let out a small sigh and reached for a piece of bread instead.

At the break in the room’s silence, her mother-in-law’s head snapped up, almost dislodging the mountain of dark curls that compensated for her diminutive height. The black beauty patch that she carefully applied to her painted white cheek each morning twitched in displeasure before she returned her attention to her dinner.

As the older woman’s teeth worked the lamb in her mouth, her bony face grew more repulsed with each chew until she finally spit into her napkin. She pointed her knife at the maid. “Where did Cook get this meat?”

Dario’s latest amusement clutched the pitcher of wine to her bosom and gaped wide-eyed at the elder Signora Gatti.

Marietta’s stomach churned, as it always did when La Signora’s temper rose. Though the maid was inconsiderate enough to flirt in front of her, Marietta wouldn’t wish her mother-in-law’s anger on anyone.

When the girl couldn’t find the courage to answer his mother, Dario intervened. He drained his wine glass in one gulp and held it out to give the girl something to do besides tremble. “You don’t like it, Mama?”

Dario slurred his words ever so slightly, which was never good this early in the evening. If he continued to pursue the maid, she would be in for a rough night. Marietta didn’t know what Dario loved more—wine or young women—but there was no denying the explosive result when the two mixed. She needed to tell the housekeeper to keep the girl busy and out of reach until the morning hours.

“It tastes spoiled.” La Signora dropped her cutlery onto the plate. “Take it away.”

The girl hastened to the opposite end of the table and whisked the offending food out of the room.

Dario sliced off a large piece of lamb and stuck it in his mouth. Between chews, he said, “It seems fine to me. What do you think, Papa?”

Marietta almost forgot Dario’s father was there. The old man’s chin rested on his chest, rising and falling with each soft snore. With his sparse snow-white hair and a habit of napping at will, Marietta figured he was in his early seventies, a good twenty years older than La Signora. Obviously, Dario inherited his love of young things from the man.

She sniffed at her own meat and wrinkled her nose at the odd smell emanating from it. No matter, she’d had enough, though she hated missing one of Cook’s delicious desserts. “If you’ll excuse me, I’m feeling a bit tired. I think I’ll retire early tonight.”

Dario gave her a few blurry-eyed blinks before he remembered his duty. When he stood too fast, the dinner wine rushed to his head. He grabbed the edge of the table to steady his teetering. “May I escort you upstairs?”

She shook her head. “No, please, finish your meal.”

Before Marietta reached the doorway, the maid slipped back into the dining room and reclaimed Dario’s attention. The girl’s ruined reputation was worth more than the few coins she would receive from him. But Marietta’s warnings had gone unheeded by previous maids, so she had no faith that this one would listen. She pressed her lips together to silence her frustration and gratefully left the room.

arietta entered the breakfast room the next morning but stopped short at the sight of Dario at the table. Usually he ate much later, which allowed her to avoid him for most of the day. She took a seat and greeted him with a nod.

“You’re up early,” she finally said in the awkward silence.

He bit off a corner of toast. A few crumbs spewed from his mouth as he replied, “My stomach’s a bit queasy. I thought some food might settle it.”

When the maid entered with Marietta’s pastry and coffee, Dario’s head popped up. Once again, he failed to hide his admiration for the girl’s ample form. His eyes roamed up and down until they settled on her bosom. Dario whispered something to the girl, and she giggled. Marietta carefully stirred her drink, unwilling to watch his lecherous behavior.

The sound of jangling keys came from the hall followed by the appearance of the housekeeper in the doorway. The hunched old woman glared at the maid and then tottered away. The girl gave Dario an apologetic smile and shrugged her shoulders before she hurried after the housekeeper.

Her husband let out a long sigh. “I think I’ll go back to bed.” He peered in the direction of the kitchen. “Alone.”

Marietta remained at the table, staring out the French doors that opened to the Verona countryside. In her mind, she changed the last few minutes of her life so that a loving husband kissed her lips and wished her a good morning. They sat side by side so their bodies could touch while they told each other their plans for the day. After this loving husband departed, her heart immediately ached, missing his presence.

Marietta frowned. There was no use in daydreaming. This was her life—like it or not. Her fingers ripped the pastry before her until it was nothing more than crumbs.

ive days had passed since their meeting in the breakfast room and Dario still kept to his bed. In her own chambers, Marietta huddled with Zeta, her maid, to hear the latest news. Only a few years younger in age, Zeta was the sister Marietta never had. Their bond of friendship forged the first night Dario left Marietta battered and weeping in her bed. The maid cleansed her wounds and held her until she slept, earning Marietta’s everlasting gratitude.

In a hushed voice, the maid shared the gossip from the other servants. “His chamber pot is filled with blood. He can’t eat, his skin is burning, and all he does is moan.”

Marietta pulled the bedcovers to her chin. “Why haven’t they called for the physician?”

“La Signora did, but the man is traveling. Cook says the old lady summoned the priest.” Zeta’s slender hand darted to her head, chest, and each shoulder to make the sign of the cross.

Chewing on her thumbnail, Marietta considered this news. She couldn’t count the number of times she had wished the vilest deaths on Dario. Now that her wish might come true, her legs began to quiver under the blanket.

“You haven’t seen him?” Zeta asked. Her fingers tugged and twirled a lock of her blond hair in a constant rhythm.

Marietta shook her head. “Not since he took to his bed. La Signora won’t let me.”

“Cook denies it’s her fault, but the old lady wants her head.” The maid dropped the lock of hair and slashed her finger across her slender throat.

This was more bad news. Marietta liked Cook. “Dario was the only one who ate the lamb. Maybe she should run away.”

Slow, heavy footsteps moved past the bedroom door, and then the smell of incense drifted into the room. “The priest,” mouthed Zeta, her brown eyes widening.

Marietta sucked a drop of blood off her thumb. She hugged her knees and began to rock. “I should go to him.”

“How will it look to the priest and the rest of Verona if he dies and I’m not by his side?” Marietta threw back the covers and retrieved her robe. When she reached the door, she stopped, knowing Zeta was right. There would be consequences for her disobedience, but she had no choice. Her shoulders sagged, but she forced her hand to turn the doorknob. “I may hate him, but I am his wife.”

That bleak fact was the only hope for her miserable future. Without Dario, she was penniless. If the Gattis turned her out, she didn’t know where she would go. She hadn’t spoken to her father since the wedding five years ago. She wasn’t even sure he was still in Venice.

As she approached Dario’s bedroom, the priest’s boys stood in the doorway, facing the bed. Before anyone could object, Marietta squeezed past, but then halted in midstride. Zeta’s gossip hadn’t done justice to the scene before her.

On one side of the bed, La Signora knelt with head bowed. Opposite her, the plump, balding Father Calvino stood with hands raised, praying in Latin. Between them, a gaunt figure—the same shade as the white linen sheets—lay with eyes closed. The smell of feces and sweat hung in the stale air.

“Dario?” Marietta said to no one in particular.

The old lady scrambled to her feet. “Get out! You do not belong here.”

Before Dario’s valet could reach her, Marietta scooted in front of the priest. “Father, I’m his wife. Please don’t deny me a final goodbye.”