Read Wait For the Dawn Online

Wait For the Dawn 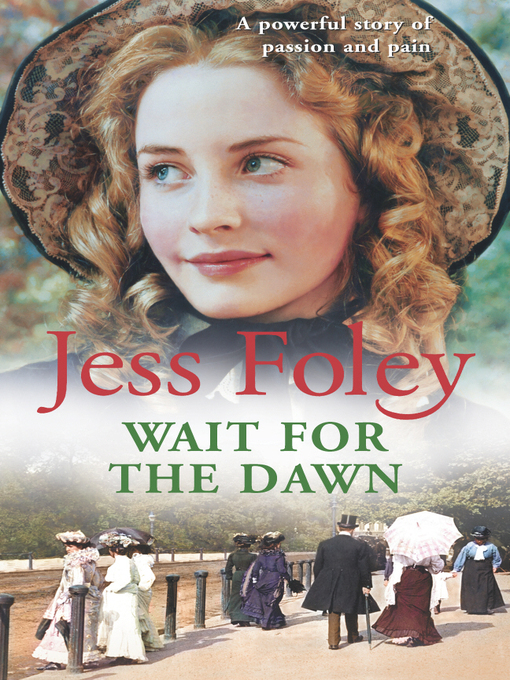 Faced with a future that holds little promise, Lydia Halley longs to leave home. But it is only after her mother's tragic death that she finally seizes her chance of freedom - a freedom she has yearned for all her life.

Taking up lodgings in the bustling city of Redbury, she meets handsome stranger Guy Anderson and so begins a friendship which blossoms into love. Until one day a telegram from Italy brings devastating news for Guy and their passionate leave-taking has dramatic consequences for them both...

Wait For The Dawn

Jess Foley was born in Wiltshire but moved to London to study at the Chelsea School of Art, then subsequently worked as a painter and actor before taking up writing. Now living in Blackheath, south-east London, Jess Foley’s first novel,
So Long At The Fair
, was published in 2001, followed by
Too Close To The Sun
in 2002, and
Saddle The Wind
in 2004.

‘If all sagas were as convicing and exuberant as this, the world would be a better place. I loved it’ Monica Dickens

‘Jess has really captured the sense of a family united against great odds. The heroine is strong but flawed as all good heroines should be and as we follow her triumphs and trails we see her change from a girl to a woman in the most dramatic and satisfying of ways’ Iris Gower

‘A gripping saga . . . The author writes with exuberance and style, and the central characters are totally convincing. The climax of the story is superbly etched’
Northampton Chronicle & Echo

WAIT FOR THE DAWN

Wait For The Dawn

Published by Arrow Books in 2004

Jess Foley has asserted the right under the Copyright, Designs and Patents Act, 1988 to be identified as the author of this work

This novel is a work of fiction. Names and characters are the product of the author’s imagination and any resemblance to actual persons, living or dead, is entirely coincidental

This book is sold subject to the condition that it shall not, by way of trade or otherwise, be lent, resold, hired out, or otherwise circulated without the publisher’s prior consent in any form of binding or cover other than that in which it is published and without a similar condition including this condition being imposed on the subsequent purchaser

First published in the United Kingdom in 2004 by Century

For Pam and Bob

PART ONE
Chapter One

Lydia did not need a second guess to tell that her mother wouldn’t be going to church. A single glance at Mrs Halley’s bruised cheek and one could be sure she wouldn’t be setting foot outside the house that day.

Putting down plates on the breakfast table in the kitchen, Lydia looked at her mother, willing her to lift her gaze, but although Mrs Halley must have felt Lydia’s burning glance she kept her eyes averted.

‘
I’ll
finish getting breakfast, Mother,’ Lydia said. ‘Why don’t you sit down.’

‘I’m not tired. I can’t afford to be tired; there’s too much to do.’ Mrs Halley took up the bread knife and cut two slices off the loaf on the board. That done she turned back to the range and moved the frying pan onto the heat, then moved back to the table and took up a dish of fresh eggs. Lydia wanted to say,
I know what happened; I heard you cry out
, but she kept silent. It would not do to acknowledge for one moment the abuse that had been suffered.

As Mrs Halley kept busy with the preparations for breakfast, Lydia turned away, facing the speckled looking glass above the old settle. Her reflection showed a young woman of twenty-one, above average height, with dark grey eyes and arching brows and a fine, rather narrow face. Touching at her fair hair, she looked past her own image to take in that of her mother. Mrs Halley was a small woman,
shorter than Lydia by three or four inches, and slight and wiry of build. She had been pretty once, it was plain to see, but the passing years had taken their toll, and nowadays she appeared a little careworn, sounded a little hollow in her infrequent laughter and looked a little threadbare in her smiles.

Suddenly a sob burst from the older woman’s throat and she set down the eggs. Quickly Lydia was moving to her side, arms reaching out. ‘Oh, Mother, don’t. Oh, please don’t cry.’

‘I’m sorry, dear. Take no notice of me – I’m just being foolish.’ Avoiding Lydia’s arms, she lifted her apron to cover her face. ‘Take no notice,’ she said, her words muffled by the fabric.

As she finished speaking there came the sound of footfalls in the hall and moments later Mr Halley entered the room. He carried his jacket in his hand.

Mrs Halley spoke without looking at him. ‘I’m just putting the eggs on,’ she said.

He laid his jacket down on the settle and took his watch from his waistcoat pocket. ‘We’re in plenty of time,’ he said. ‘There’s no rush.’ Without looking at his wife he pulled out his chair at the head of the table and sat down. He was a tall man of forty-nine, with thick, springy hair that had been grey since he was in his thirties. Cleanshaven, he was handsome, with strong, regular features, and an upright carriage. His voice, rather deep and strong, was touched with a note of kindness and solicitousness as he spoke to his wife. The tone did not fool Lydia for one moment, however. It was what she would have expected after such an incident.

‘Good morning, Lydia.’ He flicked the merest glance at his daughter, as if afraid of catching her eye. There was no fear of this, for Lydia could not face him, could not bear the thought of meeting his gaze, of seeing any hint of an awkward smile of greeting.

‘Good morning, Father,’ she said. ‘I’ll pour your tea for you. It’s just this minute made.’

‘Oh, by the way, Lydia,’ Mrs Halley murmured now as she shuffled the frying pan on the hob, ‘I shan’t be coming to church this morning.’ Her voice was only just there. ‘I’ve got several things I want to get done, so I thought I’d stay at home.’ She was trying to sound casual, doing her best to put an offhand note into her words, but they hung in the air, coldly exposed.

‘Well,’ Lydia said, as she poured tea into her father’s cup, ‘you won’t be missing anything in the sermon that you haven’t heard before. And if the Reverend Hepthaw should happen to say something new we’ll be sure to tell you about it.’ She set the cup and saucer at her father’s right elbow, and then poured for herself.

‘We certainly will,’ her father said, ‘but he hasn’t done such a thing for several years now.’ He took up a spoon to stir his tea, then smiled awkwardly towards his wife. ‘I doubt that you’ll be missing anything, Emmie.’

Emmie
he had called his wife. He usually addressed her as Emma or Mother. It was a sign that he was touched by guilt that he used the diminutive of her name. There was also the business of Mrs Halley missing the morning service, in itself unusual. At any ordinary time, on any ordinary Sunday, Mrs Halley wouldn’t have dreamed of not accompanying them to church for morning service. This particular morning, though, was different, and it was no more than Lydia expected. In the past there had been tales told with averted eyes of running into doors, or tripping over steps, but they had only succeeded when the girls were very young. It had not been too long before Lydia – and her sister Ryllis after her – had put two and two together.

The eggs done, Mrs Halley added two to a plate of bacon and placed it before her husband. As she did so, Lydia
couldn’t miss the way her father reached out and very lightly touched the side of his wife’s hand with his forefinger. The briefest touch it was, but she saw it, and saw in it all the guilt of last night’s act.

‘I think perhaps your mother’s coming down with a cold,’ Mr Halley murmured. ‘It’ll be better if she stays at home this morning.’

‘Yes, it will,’ Mrs Halley said, then added, ‘I’ll get your breakfast for you now, Lydia.’

Taking her seat at the table, Lydia said, ‘Oh, Mother, very little for me. I’m not that hungry.’

‘You must eat,’ Mrs Halley said, to which Mr Halley added, ‘Yes, indeed, there’s no telling how long Hepthaw’s sermon might last.’ He smiled as he spoke, as if aware of being amusing, but there was no humour in his self-conscious tone.

‘There you are, dear.’ Mrs Halley set down a plate of bacon and eggs in front of Lydia.

‘What about you?’ Lydia enquired. Her mother’s place at the table was bare.

‘Don’t worry about me; I had something earlier. I’ll just have a little tea.’ With this, Mrs Halley took her seat at the table and Mr Halley glanced at the two women and then closed his eyes and clasped his hands. Lydia and her mother did likewise.

‘For that which we are about to receive,’ Mr Halley gravely intoned, ‘O, Lord, make us truly thankful, and help us to be deserving of Thy bounteous gifts. Amen.’

After grey days of bitter cold, the February morning was surprisingly bright and mild, and Lydia breathed in the clear air as she walked beside her father through the village streets in the direction of the church, whose spire rose up
beyond the intervening rooftops. She wore her grey woollen cape and her dark blue bonnet, with a little dark grey muffler around her neck.