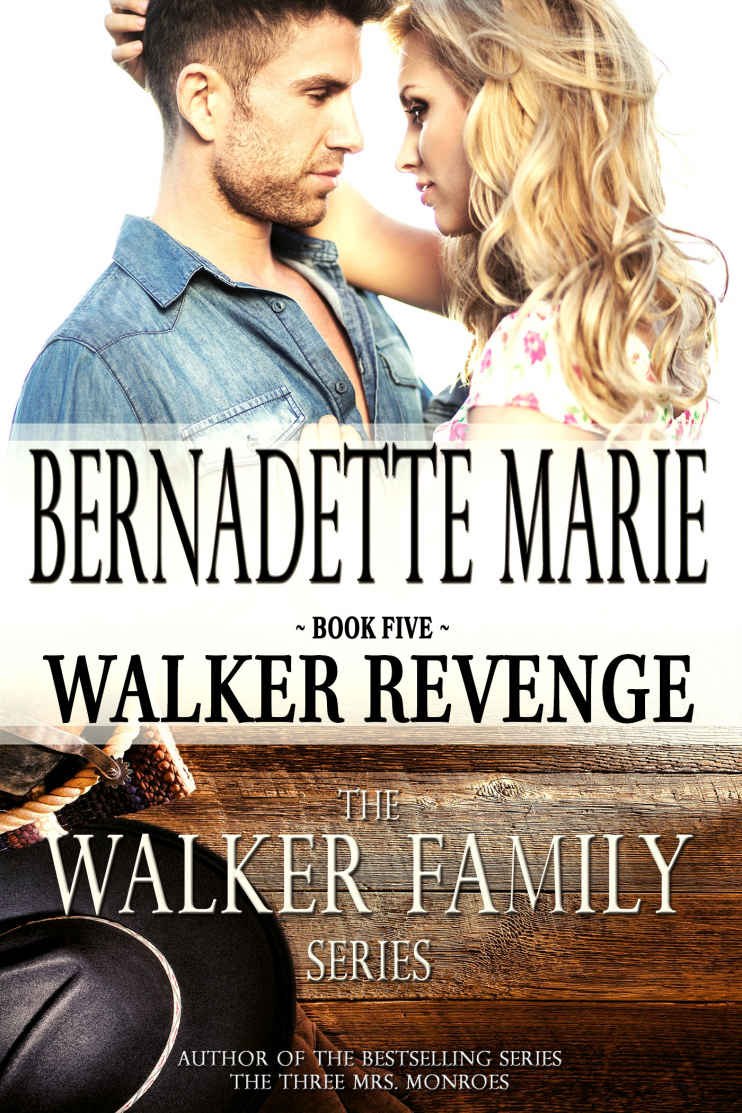 Book 5 in the Walker Family Series

This is a fictional work. The names,
characters, incidents, places, and locations are solely the
concepts and products of the author’s imagination or are used to
create a fictitious story and should not be construed as real.

All rights reserved. No part of this book may
be used or reproduced in any manner whatsoever without written
permission, except in the case of brief quotations, reviews, and
articles. For any other permission please contact 5 Prince
Publishing and Books, LLC.

Grateful that you’ve always had, and will
always have, my back!

To Stan who has always had my back—no
questions asked.

To my boys who have no idea how much they
protect one another, even when they’ve had enough of one
another.

To my parents and my sister, I thank you for
always being there when I need(ed) you.

To Clare and Cate, thank you for jumping in
with both feet and understanding me, even when sometimes I don’t
know what the heck I’m doing.

To my street team, thank you for your love
and support. I enjoy writing stories for you all.

I am thrilled to bring you Russell Walker’s
second chance romance story. As we’ve learned, Russell is perhaps
the Walker most likely to get into a fight, as is the case in this
story. However, in a happily ever story, we also know, that means
he’s a softy deep inside.

I find, being such a passive aggressive
person, I enjoy writing men with a little bit of an attitude, and
the women who can give them a run for their money. Perhaps it’s a
bit of therapy for me.

I hope you’ll enjoy this installment to the
Walker family.

Other Titles by
BERNADETTE MARIE

The Escape Clause On Thin Ice

A Romance for Christmas Indomitable
Spirit

Cart Before the Horse

Book 5 in the Walker Family Series

Daytime TV sucked. If he was subjected to
one more game show or stupid talk show, Russell thought he might
just throw the remote control through the front of the TV.

There was only one upside to being laid up
in a hospital bed—bedside food delivery.

“You look like crap,” his brother’s voice
came from the doorway.

When Russell turned he saw Dane standing
there, but the look on his face wasn’t one of humor, as the comment
might have suggested. He looked mortified.

“Why’d you leave your vacation so soon?”

“Italy is ugly. Thought this would be a
better use of my time.” Dane stepped into the room and looked down
at the tubes and bandages that encompassed the lower left side of
Russell’s body. “What the hell happened?”

Russell ran his hand over his stubbly chin,
dragging wires and tubes along with his hand. “I got pinned in my
truck.”

“Mom said you flipped it.”

Russell pursed his lips. Admitting fault
wasn’t something he was particularly good at. He was better at
dealing with things in a physical manner.

“Hence me getting stuck in the freaking
truck.”

Dane rubbed his eyes. “I see it did a number
on your attitude too.”

“Did you come here to fight with me?” He
heard his words slur from the crap they’d knocked him out with. Why
did that stuff have to stay in a body so long? “What the hell time
is it anyway?”

“Six in the morning.”

Russell turned off the TV. “And here I
thought I was watching crappy daytime TV. I guess it’s just always
bad.” He winced from the pain that seemed to be greater than the
pain medicine pumping through his IV. “Why are you here at six in
the morning?”

Dane moved to the chair next to the bed. “I
flew in and came straight here.”

Dane grinned. Maybe he sounded worse in
reality than Russell thought he did in his own head.

“You’re sorry? I never thought I’d hear you
say that.”

Dane’s expression changed and his eyes lit
up. “It’s a beautiful place. It’ll be nice when I go back.”

“Sure we will. That’s where Gia’s from.
Besides, she wants to honeymoon in Paris.”

Russell tried to sit up but found it took
too much effort. “Honeymoon? What the hell is that supposed to
mean?”

“She proposed to me,” Dane said, and the
smile on his mouth was enormous. The urge to slap it off surged
through Russell.

“She proposed to you? You couldn’t even do
that right?”

Dane shrugged. “You know me. I would have
waited too long.”

Russell felt the quick fatigue of arguing
with his brother begin to take over. He batted his eyes against
it.

The next time he opened them the room was
quiet. Faint light pushed through the drawn shade, and a woman
stood next to him. He smiled through the haze he was feeling.

She was holding his hand in her hands.
Blonde strands of hair hung around her face, but the rest was piled
up in a messy bun atop her head.

This was familiar, he thought as he took a
cleansing breath and then wiggled his nose because his nasal
cannula was making it itch.

“I didn’t mean to wake you. I was just
getting your vitals,” her voice was soft and oh so familiar.

“What time is it?” His voice was barely
functioning.

“I was talking to Dane.”

She laughed now, and that, too, was
familiar. “He left hours ago. He looked as though he needed some
sleep. Pretty exciting that he’s getting married to Gia. I enjoy
her store.”

That danced around in his head, and so did
whatever they’d put into his IV, but at least he wasn’t in any
pain.

Russell lifted his hand, cords and all, and
rubbed his eyes. He wasn’t seeing clearly, and his mind was
beginning to play tricks on him.

Now he turned his head so he could better
see the woman in the dimly lit room. Her head was hung as she
focused on reading the monitor at his side, but he knew the curves
of her face.

He’d heard that dreams could be vivid when
you were on pain meds. Seriously that had to be what was
happening.

“Chelsea?” Her name seemed louder when he
said it, but she lifted her head.

She went back to looking at the monitor.
“What are you doing here?”

“I went back to school.” She lowered his arm
back to the bed and then pushed a few buttons on the machine. “How
are you feeling?”

“Nursing student. I’m being supervised, so
please don’t argue with me.”

This was no dream. She was already mad at
him and he’d only said a few words to her.

Russell reached for her, and she quickly
glanced out the window used for observation. “What can I do for
you, Mr. Walker?”

“I have rounds to make. I can’t spend any
time in here talking. If you’d be more comfortable, I could ask to
be transferred to another unit.”

His world was fuzzy again, but he wasn’t
done. “No, I don’t want that at all. I owe you an apology. I want
to give that to you.”

She turned to the computer at his bedside,
scanned her ID tag, and then entered something with her back turned
to the window.

“Russ, I hate to see you in here like this,
but something tells me you deserved it.”

“That’s a horrible thing to say.”

She gave him a grunt. “You got in a fight at
a bar before you flipped your truck because you’d been
drinking.”

“I wasn’t drunk,” he defended.

“Maybe not, but your mouth was getting you
in trouble, which says to me, nothing has changed.” She tucked one
of those loose strands of blonde hair behind her ear, a sign that
she was nervous. “If you’re sincere about talking, I’ll come back
when my shift is over.”

“I’d like that,” he said, but his tongue
felt as though it filled his mouth and didn’t sound right. “I’m
sorry,” he said slurring his words.

“We gave you something to manage your pain.
You will probably sleep a lot.”

His eyelids grew heavy again, but he forced
them back open. “I love you, Chelsea,” he managed before he
couldn’t open them again.

Chelsea focused on the computer screen, or
pretended to. In her month of internship at the hospital, she’d run
into a lot of people she knew. She’d never thought she’d run into
Russell Walker, at least not in the shape he was in.

She glanced at him from the corner of her
eye. He was smiling in his sleep. And what had made him say that to
her?
I love you, Chelsea
. They hadn’t spoken in nearly three
years. She hadn’t seen him since he’d been discharged from the
Army.

His mother had invited her to his “Welcome
Home” party, but Chelsea hadn’t gone. How could she?

Chelsea squeezed her eyes tightly to ward
off any tears that might threaten. The Walkers had raised decent
men, even the hot-tempered Russell. He hadn’t deserved a two-timer
like her.

The head nurse walked into the room.
“Everything okay in here?”

“Yes. He woke up for a moment, but the pain
meds kicked in.”

The head nurse checked her watch. “Okay,
you’ll come back through in another hour and do this again. His
surgery was major, and he’ll need to be constantly monitored.”

Chelsea nodded as she tucked her pen into
her pocket and picked up her paperwork. She would certainly need to
ask for a different rotation until he was better. Looking down at
his bruised face and his cut up arms was breaking her heart. But
she was sure that wasn’t the deep-rooted source of her anguish.

His words were ringing in her ears. Any
other day she’d have written them off as banter from a patient on
meds. But this was Russell Walker—her first love.

Did he mean what he’d said? Because she’d
never stopped loving him, even after she’d gotten married.

No wonder that hadn’t lasted long.

Chelsea walked out of the room and down the
hall to her next patient, but for the next hour, all she could
think about was Russell Walker, and what might have been had she
not have been so spiteful, and had waited for him to return
home.

He’d seen all of his brothers. His mother
had sat in the chair knitting something most of the day, and his
father had stopped in three times. Now he was alone. His dinner
tray sat in front of him untouched, and his freaking leg hurt so
much he thought he’d cry.

But the moment the door to his room opened,
he perked up. Absolute disappointment filled his body as his cousin
Jake walked through the door.

“Hey,” Jake said as he closed the door
behind him. “You’ve looked better.”

Jake removed his ball cap and ran his hand
over his hair before replacing it. “Yeah, I’ve been there,
remember?”

The Gates of Evangeline by Hester Young
Low Tide by Dawn Lee McKenna
Die-Off by Kirk Russell
Scandal Never Sleeps by Shayla Black, Lexi Blake
The Brickmaker's Bride by Judith Miller
Above All Else: A Bad Boy Military Romance (Easy Team Book 2) by Gemma Hart
The Labyrinth of the Dead by Sara M. Harvey
A Kiss With Scandal (Scandals & Secrets 4) by Janelle Daniels
Fighting for Survival (The Estate, Book 3) by Sherratt, Mel
Desert Dancer by Terri Farley