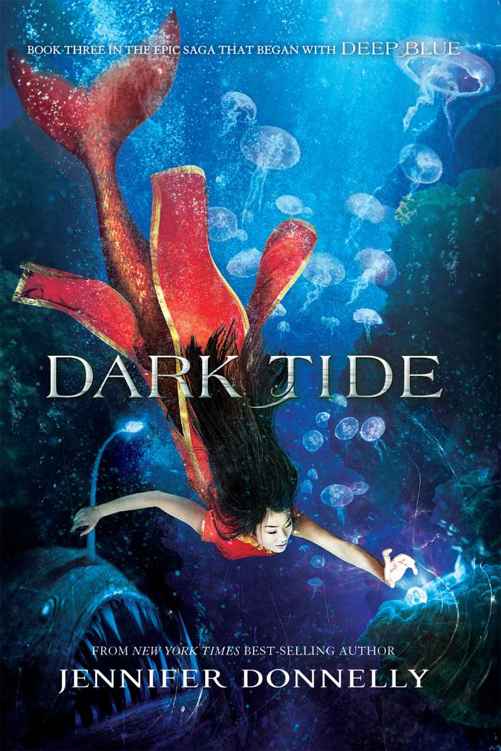 All rights reserved. Published by Disney • Hyperion, an imprint of Disney Book Group. No part of this book may be reproduced or transmitted in any form or by any means,
electronic or mechanical, including photocopying, recording, or by any information storage and retrieval system, without written permission from the publisher. For information address Disney •
Hyperion, 125 West End Avenue, New York, New York 10023.

There is no way back for me now. I am going to take you on journeys you’ve never dreamed were possible.

T
HE MERMAID’S SWORD glinted in the watery twilight of Tanner’s Deeps. She held it in front of her, both hands gripping the hilt, as she
moved through the deserted village.

Tanner, whoever he was, was long gone. So was everyone else. Yet the mermaid kept her sword raised. Blacktip sharks were known to hunt along the lonely currents that swept through abandoned
villages. Predators of another kind prowled them, too—looters who ransacked the houses of the disappeared for anything of value.

The mermaid was traveling back to Ondalina, her arctic home, and had seen many such villages on her way. In the Freshwaters. In Miromara, and here, in Atlantica. All were gutted and ruined.
Their mer had been abducted. The few who’d managed to escape told of soldiers in black who’d come for them with weapons and cages. Where the mer had been taken, no one knew.

Satisfied no looters were near, the mermaid sheathed her sword. She was weary and night was coming with its many dangers. A small house, its door off the hinges, was directly in front of her.
She entered it cautiously, startling some mackerel. The downstairs rooms showed signs of violence—an overturned table, smashed plates, toys scattered across the floor. She swam upstairs and found a room that offered her a
soft, anemone-filled bed.

Weariness was etched on her face. She craved sleep, but dreaded it, too. Nightmares haunted her. Every time she closed her eyes, she saw it—Abbadon, the monster. She saw it advancing on
the others—Ling, Ava, Neela, Becca, and Sera—and tearing them apart.

But they wouldn’t have wanted her help. Not once they’d learned the truth.

As she swam toward the bed, something moved behind her. She caught a blur of darkness, a pale face.

There was someone else in the room.

The mermaid spun around with the speed of a tarpon, her heart thumping in her chest, her hand on the hilt of her sword.

There
was
someone else there, she saw, but not in the room. He was inside a mirror that was hanging on a wall.

“Don’t be afraid, Astrid Kolfinnsdottir. I would never hurt you,” he said. “I know your secret. I know how you’ve suffered. They mock you and call you weak, yet you
have the blood of the greatest mage who ever lived running through your veins. Come with me. I’ll put an end to the cruel words, the laughter. I’ll make you powerful, more powerful than
any creature alive.”

The mermaid eyed him warily. He was human. His face was obscured by shadows. But she could see that at his neck, a flawless black pearl hung from a chain.

“How do you know my name? Who are you?” she demanded.

The man replied by offering his hand. It pushed through the silvered glass and hovered in the water—a question instead of an answer.

The mermaid’s fins prickled, but she ignored her fear. Something about him drew her closer, something as powerful as the tides.

She lifted her hand to his. As she did, she glimpsed her own reflection in the glass. And beyond it, the man’s face, no longer in the shadows. For an instant, his eyes—as black and
bottomless as the Abyss—became her own.

In terror, she slammed her tail fin into the mirror and shattered it. As the pieces rained down, the mermaid bolted from the room.

She swam as fast as she could. Out of the house, away from the village. Into the cold, dark waters of the night.

“Shoot to kill,” she ordered.

Twenty-five Black Fin fighters nodded in unison, then fanned out, their camo blending in with the weedy rock face at the base of Miromara’s royal palace. Casting a last glance at the dark
waters above her, Sera turned and headed for a tunnel in the rock. Her uncle’s soldiers rarely patrolled this lonely part of the palace grounds, but she could afford no surprises tonight.

THE TRAITORS
’
GATE
, read the ancient words carved over the tunnel’s entrance. Enemies of Miromara had been brought to the dungeons
through this passageway for thousands of years, until it had been permanently locked during an unprecedented era of peace and then forgotten. The irony was not lost on Sera. The real traitors were
inside
the palace—her uncle Vallerio; his new wife, Portia Volnero; and their daughter, Lucia. They’d assassinated Sera’s mother, Regina Isabella, and stolen the
throne.

A few yards into the tunnel, darkness gave way to the light of a portable lava globe, hung on the wall by one of the Black Fins. Its glow played over Sera, revealing a mermaid very different
from the one who’d lived in the palace not too long ago.

Sera cut a commanding figure now—strong, straight-backed, and sure of herself. Muscles rippled in her arms and tail. Her hair, dyed black, was cut pixie-short so no enemy could grab it and
hold her back, as the Mirror Lord once had. As all Black Fins did, she wore a short military jacket of dark blue with black trim to honor Cerulea, the capital of Miromara. A dagger rested at her
hip. The doubt and hesitance that had clouded her green eyes were gone; a dangerous new light burned in them.

Up ahead, Sera saw a tall iron gate crusted with barnacles. Four young mermen were furiously sawing at its bars, muscles straining in their backs and arms. Iron repelled magic, so no songspells
could be used to break or liquefy the metal.

She lowered her weapon. “How much longer, Yaz?” she asked one of the mermen.

He was her second-in-command, and this had been his idea. Sera remembered when he and Luca, another fighter, had come swimming into the Black Fins’ headquarters at four one morning,
whooping and laughing.

“Look what we found!” Yaz had crowed.

He’d unrolled an ancient kelp parchment and placed it on the table in the safe house. Serafina and the rest of the Black Fins had gathered around.

“It’s the original building plan for the palace. Complete with the entire network of lava pipes,” Yaz had explained, rubbing his hands together. “This run of
pipe”—he’d pointed to a thick black line drawn in squid ink—“carried lava from the seam underneath the palace to the west wing. It was supposed to have been removed
two centuries ago, when the treasury vaults were moved from the Grande Corrente to the palace.”

Luca had jumped in. “But it never was!” he said, unrolling a second parchment. “These are the plans for the relocated treasury vaults. They couldn’t place them close to
lava pipes because if the pipes broke, the lava would melt the walls, leaving the treasure vulnerable. So a
new
run of pipe was laid—well below the vaults. The
old
pipes
were only closed off, not demolished.”

“Everything’s still there!” Yaz had said gleefully. “The pipes, the diverter, even the shutoff valve. Only a foot of rock separates the old pipe from the treasury. All we
have to do is break the pipe, open the old valve, let the lava burn through the rock—”