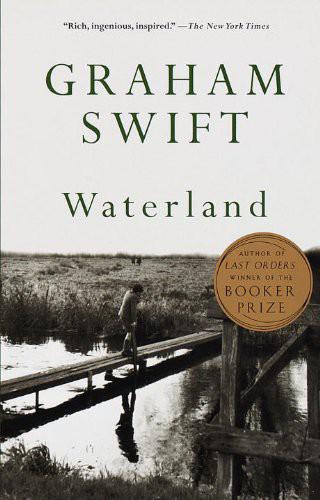 ABOUT THE STARS AND THE SLUICE

ABOUT THE END OF HISTORY

A BRUISE UPON A BRUISE

ABOUT HOLES AND THINGS

ABOUT THE STORY-TELLING ANIMAL

ABOUT THE RISE OF THE ATKINSONS

ABOUT THE QUESTION WHY

ABOUT THE CHANGE OF LIFE

ABOUT THE SAVIOUR OF THE WORLD

ABOUT BEAUTY AND THE BEAST

ABOUT THE EAST WIND

A FEELING IN THE GUTS

ABOUT MY GRANDFATHER’S CHEST

ABOUT THE
ROSA II

Historia, -ae
, f.
1.
inquiry, investigation, learning.
2.
a) a narrative of past events, history. b) any kind of narrative: account, tale, story.

‘Ours was the marsh country …’
Great Expectations

1
About the Stars and the Sluice

‘A
ND don’t forget,’ my father would say, as if he expected me at any moment to up and leave to seek my fortune in the wide world, ‘whatever you learn about people, however bad they turn out, each one of them has a heart, and each one of them was once a tiny baby sucking his mother’s milk …’

Fairy-tale words; fairy-tale advice. But we lived in a fairy-tale place. In a lock-keeper’s cottage, by a river, in the middle of the Fens. Far away from the wide world. And my father, who was a superstitious man, liked to do things in such a way as would make them seem magical and occult. So he would always set his eel traps at night. Not because eel traps cannot be set by day, but because the mystery of darkness appealed to him. And one night, in midsummer, in 1937, we went with him, Dick and I, to set traps near Stott’s Bridge. It was hot and windless. When the traps had been set we lay back on the river-bank. Dick was fourteen and I was ten. The pumps were tump-tumping, as they do, incessantly, so that you scarcely notice them, all over the Fens, and frogs were croaking in the ditches. Up above, the sky swarmed with stars which seemed to multiply as we looked at them. And as we lay, Dad said: ‘Do you know what the stars are? They are the silver dust of God’s blessing. They are little broken-off bits of heaven. God cast them down to fall on us. But
when he saw how wicked we were, he changed his mind and ordered the stars to stop. Which is why they hang in the sky but seem as though at any time they might drop …’

For my father, as well as being a superstitious man, had a knack for telling stories. Made-up stories, true stories; soothing stories, warning stories; stories with a moral or with no point at all; believable stories and unbelievable stories; stories which were neither one thing nor the other. It was a knack which ran in his family. But it was a knack which my mother had too – and perhaps he really acquired it from her. Because when I was very small it was my mother who first told me stories, which, unlike my father, she got from books as well as out of her head, to make me sleep at night.

And since my mother’s death, which was six months before we lay by the eel traps under the stars, my father’s yen for the dark, his nocturnal restlessness, had grown more besetting. As if he were constantly brooding on some story yet to be told. So I would see him sometimes, inspecting his vegetable patch by the moonlight, or talking to his roosting chickens, or pacing up and down by the lock-gates or the sluice, his movements marked by the wandering ember of his cigarette.

We lived in a lock-keeper’s cottage by the River Leem, which flows out of Norfolk into the Great Ouse. And no one needs telling that the land in that part of the world is flat. Flat, with an unrelieved and monotonous flatness, enough of itself, some might say, to drive a man to unquiet and sleep-defeating thoughts. From the raised banks of the Leem, it stretched away to the horizon, its uniform colour, peat-black, varied only by the crops that grew upon it – grey-green potato leaves, blue-green beet leaves, yellow-green wheat; its uniform levelness broken only by the furrowed and dead-straight lines of ditches and drains, which, depending on the state of the sky and the angle of the sun, ran like silver, copper or golden wires
across the fields and which, when you stood and looked at them, made you shut one eye and fall prey to fruitless meditations on the laws of perspective.

And yet this land, so regular, so prostrate, so tamed and cultivated, would transform itself, in my five- or six-year-old mind, into an empty wilderness. On those nights when my mother would be forced to tell me stories, it would seem that in our lock-keeper’s cottage we were in the middle of nowhere; and the noise of the trains passing on the lines to King’s Lynn, Gildsey and Ely was like the baying of a monster closing in on us in our isolation.

A fairy-tale land, after all.

My father kept the lock on the River Leem, two miles from where it empties into the Ouse. But because a lock-keeper’s duties are irregular and his pay, set against the rent-free cottage in which he lives, is scant, and because, in any case, by the nineteen-thirties, the river-traffic on the Leem had dwindled, my father also grew vegetables, kept chickens and trapped eels. It was only in times of heavy rain or thaw that these secondary occupations were abandoned. Then he would have to watch and anticipate the water-level. Then he would have to raise the sluice which cut across the far side of the stream like a giant guillotine.

For the river in front of our cottage divided into two channels, the nearer containing the navigation lock, the further the sluice, with, in between, a solidly built brick-faced pier, a tiny island, on which stood the cabin housing the sluice engine. And even before the river had visibly risen, even before its colour had changed and it began to show the milky brown of the Norfolk chalk hills from which it flowed, Dad would know when to cross the lock-gates to the cabin and begin – with a groaning of metal and throbbing of released water – to crank up the sluice.

But under normal conditions the sluice remained lowered, almost to the river bottom, its firm blade holding back the slow-flowing Leem, making it fit for the passage
of boats. Then the water in the enclosure above it, like the water in the lock-pen, would be smooth and placid and it would give off that smell which is characteristic of places where fresh water and human ingenuity meet, and which is smelt over and over again in the Fens. A cool, slimy but strangely poignant and nostalgic smell. A smell which is half man and half fish. And at such times Dad would have plenty of leisure for his eel traps and vegetables, and little to do with the sluice, save to combat rust, grease the cog-wheels and clear away from the water the accumulations of flotsam.

For, flood or no flood, the Leem brought down its unceasing booty of debris. Willow branches; alder branches; sedge; fencing; crates; old clothes; dead sheep; bottles; potato sacks; straw bales; fruit boxes; fertilizer bags. All floated down on the westerly current, lodged against the sluice-gate and had to be cleared away with boat-hooks and weed-rakes.

And thus it was, one night in midsummer, when God’s withheld benedictions were shining in the sky, though this was several years after Dad told us about the stars, but only two or three since he began to speak of hearts and mother’s milk, and the tump-tump of the pumps was drowned now, in the evening, by the roar of ascending bombers – it was, to be precise, July, 1943 – that something floated down the Leem, struck the iron-work of the sluice and, tugged by the eddies, continued to knock and scrape against it till morning. Something extraordinary and unprecedented, and not to be disposed of like a branch or potato sack or even a dead sheep. For this something was a body. And the body belonged to Freddie Parr, who lived less than a mile away and was my age, give or take a month.

2
About the End of History

C
HILDREN. Children, who will inherit the world. Children (for always, even though you were fifteen, sixteen, seventeen, candidates for that appeasing term ‘young adults’, I addressed you, silently, as ‘children’) – children, before whom I have stood for thirty-two years in order to unravel the mysteries of the past, but before whom I am to stand no longer, listen, one last time, to your history teacher.

You, above all, should know that it is not out of choice that I am leaving you. You should know how inadequate was that phrase, so cruel in its cursoriness, ‘for personal reasons’, that our worthy headmaster, Lewis Scott, used in his morning assembly announcement. And you should know how beside the point, by the time they were applied, were those pressures brought to bear by this same Lewis in the name of a so-called educational rationale. (‘Don’t imagine I like it, Tom, but we’re being forced to economize. We’re cutting back on history. You could take early retirement …’)

You should know, because it was you who were witness to the fact that old Cricky, your history teacher, had already in one sense, and of his own accord, ceased to teach history. In the middle of explaining how, with a Parisian blood-letting, our Modern World began, he breaks off and starts telling – these stories. Something about living by a river, something about a father who trapped eels, and a drowned body found in the river, years
ago. And then it dawned on you: old Cricky was trying to put himself into history; old Cricky was trying to show you that he himself was only a piece of the stuff he taught. In other words, he’d flipped, he’d gone bananas …

Or, as Lewis put it, ‘Maybe you should take a rest. A sabbatical term. How about it? A chance to get on with that book of yours – what was it now? –
A History of the Fens
?’

Teach Us to Outgrow Our Madness by Kenzaburo Oe
A Blue So Dark by Holly Schindler
UNDER BY DURESS by Kayla Stonor
A Trick of the Mind by Penny Hancock
Story Girl by Carlson, Katherine
True You by Janet Jackson
Born of Oak and Silver (The Caradoc Chronicles) by McKean, Marie
The Sheikh's Twin Baby Surprise by Rayner, Holly
A Family Affair (A Taboo Tale #2) by Violet Williams
And De Fun Don't Done by Robert G. Barrett