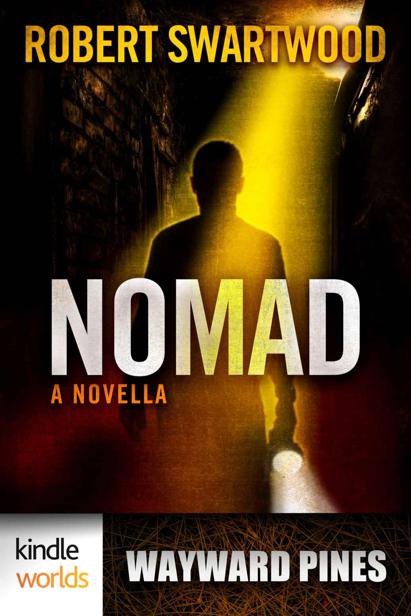 This book is a work of fiction. Names, characters, places, and incidents either are products of the author’s imagination or are used fictitiously.

This work was made possible by a special license through the Kindle Worlds publishing program. All characters, scenes, events, themes, plots, and related elements of the Wayward Pines remain the exclusive copyrighted and/or trademarked property of Blake Crouch, its affiliates, or licensors.

For more information on the Kindle Worlds publishing program:
www.amazon.com/kindleworlds

No part of this book may be reproduced, stored in a retrieval system, or transmitted in any form or by any means, electronic, mechanical, photocopying, recording, or otherwise, without express written permission of the publisher.

I killed my first abby today.

I was following the river when I came around the bend and there it was, maybe fifty yards away, crouched down and lapping the water like a deer.

I stopped at once.

My first thought was of you.

Not of my mission, not of saving us all, but of you.

The abby must have smelled me, or sensed me, or maybe it even heard me. It stood up, turned in my direction, and just stared at me.

The abby screeched and charged at me.

I had the Winchester strapped over my shoulder, but it was the Smith & Wesson I pulled from my belt and aimed straight at the abby.

The creature didn’t even slow.

It knew nothing of the power in the palm of my hand.

It simply saw me as a target. As meat. As its lunch.

I waited until it was less than ten yards away.

The look in its black eyes was completely animalistic. Any doubt I had about whether it possessed some shred of humanity was quickly erased.

I put a bullet between its eyes.

Tobias read the entry once more and then closed his journal.

The morning sun peeked up through the trees, strong, and bright, and warm.

He considered tearing the page out. Crumping it up into a ball and using it for kindling whenever he felt brave enough to actually start a fire.

Still, it was important, wasn’t it? Of course it was. He was out here in the middle of nowhere, only four days gone, and had killed one of the things that was threatening their entire existence. If that wasn’t important, Tobias didn’t know what was.

She didn’t need to know about the abby’s blood splattering on his clothes. Didn’t need to know about the clicking from just behind the trees, less than 300 yards away. About how Tobias had ducked down behind some boulders near the river, the revolver in hand, his heart pounding and his entire body on edge. About the second abby that appeared, a much smaller one, approaching the dead abby and nudging it once before nudging it again. About the glimpse Tobias had of the sadness in the smaller abby’s eyes, and the creeping knowledge that he had just killed its mother.

It would have been so easy, he knew, to step out from behind the boulders and use the revolver on the smaller abby.

There was the risk, of course, that the gunshot would bring even more abbies, though Tobias doubted it. If more were nearby, he would have heard them come running by now.

No, it was just the smaller one, the dead abby’s offspring, and even though everything in Tobias told him to kill it, he remained where he was behind the boulders. Listening to the water bubbling and gurgling as it headed down stream. Listening to the child abby mourn the loss of its parent.

He didn’t eat much of anything for breakfast. It wasn’t that he wasn’t hungry—he was starving, in fact—but his body needed to become conditioned. For most of his life his body was used to getting three meals a day, plus the occasional snack. Now food was sparse, and he would be eating little of it.

He hiked for nearly an hour before taking a break. That was another thing he needed his body to adjust to—more walking, less rest. Tobias knew eventually his body would adjust. He just hoped it would be sooner rather than later.

It was bad enough being out in the wilderness surrounded by creatures that wanted to kill you. The last thing he needed was for his body to shut down on him.

He sat on a rock that overlooked most of the valley. A mix of firs and aspens and pines lay before him like a blanket. He glanced over his shoulder, but any glimpse of Wayward Pines was long gone.

He unzipped the Kelty backpack he’d set on the ground between his legs and pulled out the leather-bound journal sealed in plastic. Opened the cover and read the words scribbled in loopy, graceful lines by the woman he loved.

When you come back—and you will come back—I’m gonna fuck you, soldier, like you just came home from war
.

He had the words memorized but still liked seeing them there on the page. A smile spread across his face before quickly fading. It had only been four days since he last saw her, and already he was beginning to think he might never see her again.

The journal fell from his knee.

Tobias blinked, looked down, stared at the journal for a moment on the ground, then leaned forward to pick it up. And heard the gunshot just a half-second after the tree beside him spat up bark.

He hit the ground on instinct, and on instinct knew better than to look up over the rock. He pulled the .357 from his belt, opened the cylinders to check the load, cursed when he saw he only had three bullets to work with. He had extra rounds in his backpack, sure, but right now wasn’t the time to reload. That would waste valuable seconds. Seconds he needed to try to compute what was going on.

The echo of the gunshot reverberated across the valley and died away leaving only silence. A few spooked birds in the trees. Blood pounding away in his ears.

Holding his breath, listening for any sound. Any snapping twig or branch. Any scrape of boot on rock.
Anything
that would alert him to the person’s location who just took a shot at him, because obviously it was a person. No doubt about it. The abbies had evolved from humans but they didn’t have the mental capabilities of humans. They had yet to figure out how to create fire, let alone learn how to use a firearm.

Several seconds passed in silence. Tobias risked a peek around the rock. Nothing but foliage. Trees. Bushes. More rocks. And was that…movement?

Before he could tell for certain, the other side of the rock exploded at the same moment the gunshot echoed across the valley.

Tobias popped up from where he was crouched and fired blindly toward where he had seen movement, rushing toward the trees several yards away. Another gunshot sounded out from the foliage as he dove behind one of the massive trees.

He put his back up against the trunk, held the gun up by his ear, and realized that he had fired three rounds. That meant, shit, there were no rounds left.

The trees here provided better cover than the rock, but Tobias still felt exposed. It was the gunshots that worried him most. If any abbies were nearby, the noise would no doubt attract them.

Several more seconds passed in silence. Tobias closed his eyes and concentrated on the sounds around him. The birds starting up their songs. The wind slicing through branches. A woodpecker tapping a tree. Leaves rustling somewhere close by, somewhere behind him, but it wasn’t from the invisible hand of the wind.

It was on ground level, only several yards away. Coming in his direction. Tobias opened his eyes. What was he supposed to do now?

He couldn’t just wait here until the shooter came to him. Well, he could, but he had no way to know whether it was just one shooter or how well armed that shooter might be. What Tobias needed now above anything else was some kind of distraction. But what?

He inched toward the right side of the tree, the Bowie in one hand, the duster in the other. Somewhere on the other side, a twig snapped and then silence.

Throwing the duster toward the left side of the tree, Tobias waited an extra second before stepping around the right side.

The shooter was only 40 yards away, a rifle in his hands, the barrel of the rifle at first tracking the thrown duster before quickly swinging back toward Tobias.

Tobias raised the knife above his head and threw it. He had been aiming for center mass but the knife plunged into the shooter’s thigh.

Crying out, the shooter dropped the rifle and reached for the knife. Tobias was already charging forward. Just as the shooter grabbed the handle of the Bowie, Tobias jumped forward, planting his foot into the shooter’s chest. The shooter hit the ground and Tobias was on top of him at once, extracting the knife from the man’s thigh and pressing the bloody blade to the man’s throat.

“Please,” he moaned, “please don’t take me back. I don’t want to go back. Just…just kill me instead.”

The man was dressed in dungarees and a sweatshirt, dull and drab colors that mixed in nicely with the foliage. Tobias had already searched him. A knife and extra ammunition, but besides that and the rifle, he found nothing else.

He pulled a long piece of cloth from his backpack, hating to give it up but sacrificed it anyway so the man could wrap it around his thigh and try to keep in the blood.

The man now sitting on the ground, his back against a tree, winced at the pain as he talked. “Me and my wife and children, we…we escaped during one of the fêtes. We used it as cover and grabbed our things and ran the other way. We didn’t really know where we were going until we reached the fence. And then…then we followed it for a bit until we found a place to climb under and just kept running.”

Tobias sat on a rock several yards away, both the Winchester and Smith & Wesson fully loaded. The rifle he held across his knee, not exactly aimed at the man but angled so he could kill him in a second if need be.

“How long ago was this?”

The man shrugged. “Months. Years. Weeks. I don’t know. You kind of lose your sense of time outside of Wayward Pines.”

“I told you, I thought you were coming to find us. We don’t want to go back there. That…that isn’t life.”

Tobias thought about Wayward Pines, the last town in the world, a town that was just a façade. The real world was here, beyond the fence, in the wild with the abbies. This was the only place Pilcher didn’t control, and because of that, it was pure.